Early-onset colorectal cancer (EOCRC) is a special subtype of CRC and our knowledge related to the etiology and mechanism of this subtype is far from being comprehensive [10-14]. EOCRC is defined as CRC diagnosed under the age of 50 with certain hereditary predisposition, which has distinct clinicopathological and molecular features compared with traditional CRC [15,16]. Mounting evidence [9,11,15,16] has demonstrated that EOCRC presents at a later TNM stage and possess a more aggressive histopathology. Most studies focused on the rising incidence of EOCRC from the Surveillance Epidemiology and End Results (SEER) database, but no current study focused attention on the potential factors affecting survival of EOCRC. Accurate estimation of survival among patients with cancer is always difficult, even for some experienced physicians [17]. A more precise estimation of survival tailored to individual patient with EOCRC is a potentially practical tool for clinicians. Nomogram is a kind of statistic tool that combines all significant prognostic indexes and represents with a simple graphical model [18,19]. Hence, creating a survival nomogram based on the key clinical parameters with good discrimination and calibration abilities is critical to improve the prognosis of patients with EOCRC.

In this present study, we aimed to establish and verify a survival nomogram integrating the accessible clinical features to improve prognostication for patients with EOCRC in clinical practice. We initially used LASSO Cox regression to screen variables showing both statistical and clinical significance in the SEER training set. Subsequently, the informative parameters were further integrated into the establishment of survival nomogram, and concordance index (C-index) was employed to evaluate the predictability of this nomogram in the SEER training and validation sets. Then, the predictive value of the survival nomogram was also validated in Renmin Hospital of Wuhan University (RHWU) validation set. Finally, we compared the predictive performance of the prognostic nomogram with TNM staging system which is extensively applied for accurate prognostication in clinical practice.

All patients with EOCRC from SEER database between 2010 and 2016 were retrospectively screened. A total of 262285 cases of CRC patients from SEER database were initially reviewed and 23813 patients with EOCRC were finally included into this study. The included patients were randomly assigned to SEER training set and SEER validation set according to the ratio of 7:3. Furthermore, patients' with EOCRC from RHWU was used as an external validation set to detect the generalizability of the survival nomogram. A total of 630 cases of CRC diagnosed between January 2015 and January 2020 were initially screened from RHWU and only 77 patients with EOCRC were finally incorporated into the RHWU validation set. The detailed selection process of EOCRC patients in both databases is shown in Figure 1. This study plan was checked before the initiation of the study by clinical institutional ethics board of our hospital.

As our primary goal was to construct a survival nomogram with great practicability, so we retrospectively collected variables that were easily obtained in SEER database and our hospital. The following information of EOCRC patients was abstracted from databases: age, gender, primary tumor site, race, tumor grade, summary stage, TNM stage, T stage, N stage, M stage, tumor size and perineural invasion. Furthermore, we also obtained the therapeutic and survival data of the included patients, such as the surgery for primary site, radiotherapy, chemotherapy, OS.

Construction and validation of the survival nomogram

All statistical analyses were implemented with SPSS 22.0 and R 3.4.3 software. The categorical data were represented as number with percentage and tested with Chi-square, while continues variables were expressed as mean with standard deviation and examined by variance analysis. In addition, for the comparison of endoscopic treatment and surgical resection in early-stage (Tis-T1N0M0) patients with EOCRC, propensity score matching [21] (PSM) was performed to balance the basic features between two groups. P value less than 0.05 at two sides was viewed as statistically significant.

The detailed selection process of patients with EOCRC. 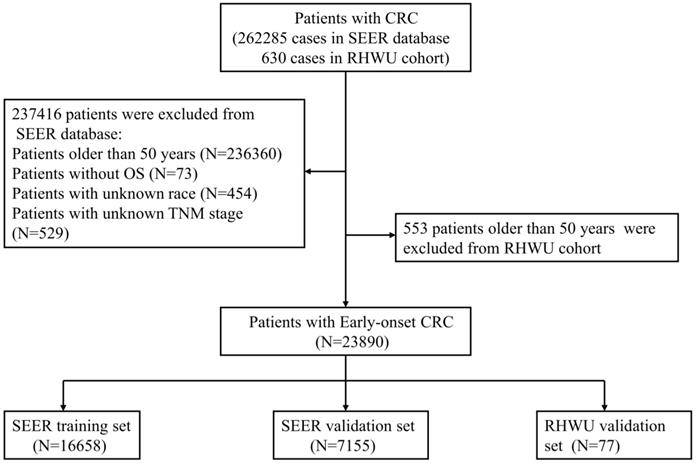 Construction and verification of the survival nomogram in SEER database

Selection of informative features using LASSO binary Cox regression model. (A) Profiles of LASSO coefficient for clinical and pathological features. (B) Identification of tuning parameter (λ) in the LASSO Cox model. (C) Each horizontal line represents a factor selection result for overall survival. Histogram shows the coefficients of individual features that contribute to the survival nomogram. 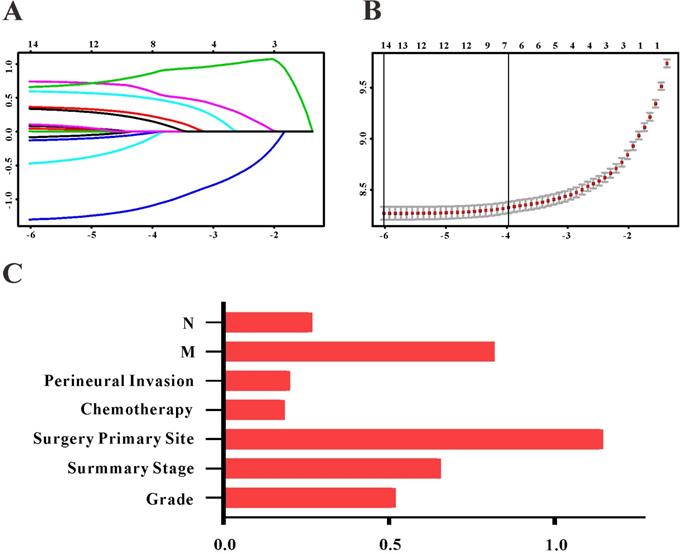 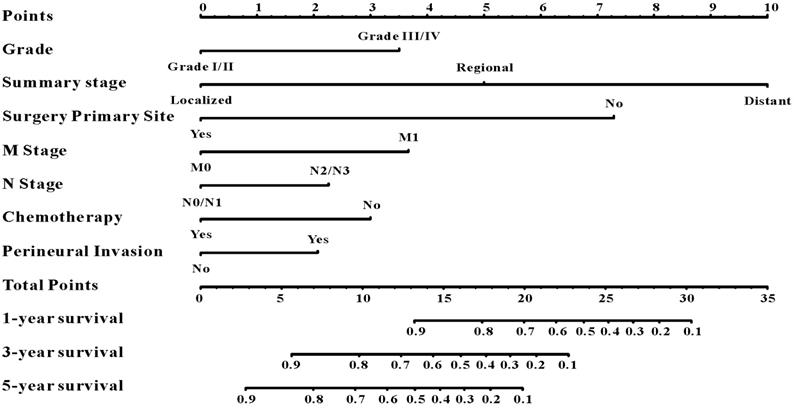 Clinical features of EOCRC patients in SEER and RHWU sets

External validation of the survival nomogram with RHWU cohort 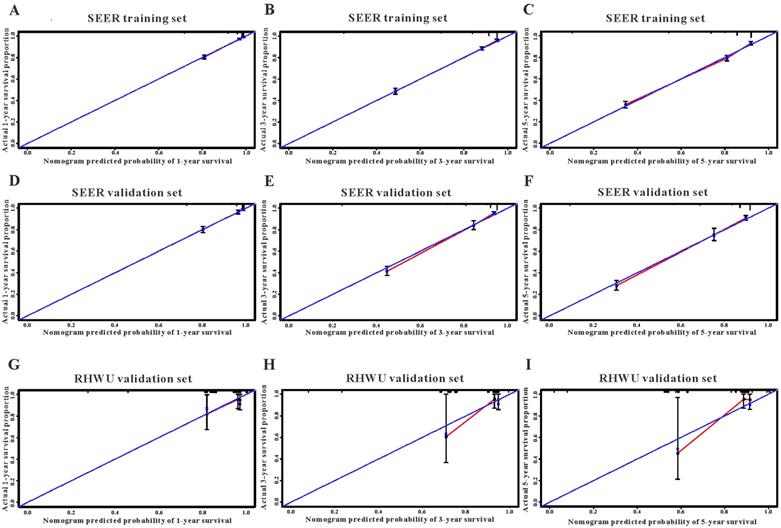 Comparison of the survival nomogram with TNM stage

Endoscopic treatment versus surgery for early-stage patients with EOCRC

To compare the efficacy of endoscopy and surgical resection for the treatment of early-stage patients with EOCRC from SEER database, we initially applied PSM analysis to balance the clinical features between endoscopy versus surgery groups. A total of 3591 EOCRC patients with early stage (Tis-T1N0M0) were initially screened and 3347 early-stage patients with EOCRC were finally included into this PSM analysis. Four variables were selected for PSM, including age, gender, race and primary site. We found that all the clinical variables were not statistically different between two groups (Table 3). Then Kaplan-Meier plotters were drew to assess the association between two therapy methods and OS (Figure 8). However, the log rank test revealed that no significant association between two therapy methods and OS was observed before PSM (HR=0.758, P=0.115) and after PSM (HR=0.730, P=0.121). Hence, we could conclude that endoscopic resection possessed comparable OS for the treatment of EOCRC patients with early stage (Tis and T1N0M0) to those treated by surgical resection.

In this study, we identified seven clinical variables significantly related to OS. We constructed and internally validated a survival nomogram based on SEER database, and this nomogram exhibited good discrimination and calibration capabilities in predicting OS of patients with EOCRC. Moreover, RHWU cohort was used as an external validation set and our nomogram also performed well in predicting OS in this population. Finally, this survival nomogram outperformed TNM stage in prediction of OS, implying that our nomogram could facilitate the clinical evaluation of prognosis among EOCRC patients. As far as we concerned, this survival nomogram is the first reported in the literature for accurately predicting OS with good calibration ability in patients with EOCRC.

TNM stage is a most commonly used staging system for CRC [29-31], and thus we compared some predictive indexes of the survival nomogram in the SEER database and RHWU cohort with that of TNM stage. We observed that the survival nomogram achieved better predictive efficiency as measured by C-indexes, IDI and NRI than TNM stage. Furthermore, we divided the patients with EOCRC in SEER database into four groups according to the predicted probabilities. Unsurprisingly, Kaplan-Meier curves displayed that the differences among four groups divided by the nomogram were more significant compared with that by TNM stage. It is reasonable that the survival nomogram fared better in predicting OS than TNM stage. Previous studies [32-34] reported that some clinical features, such as demographic features, tumor histopathology, therapeutic regimens also played an important role in the evaluation of prognosis in patients with CRC. However, TNM stage did not take these informative factors into account. To the contrary, our survival nomogram integrated seven prognostic factors and could make more personalized prediction for patients with EOCRC.

Comparison of overall survival in early-stage patients with EOCRC undergoing endoscopic resection and surgery before PSM (A) and after PSM (B).

Characteristics of early-stage patients with EOCRC before and after matching

Several limitations still exist in the present study. First, the sample size of RHWU validation set in our analysis was relatively small, which limited the generalizability of our survival nomogram. The small sample size of RHWU validation set led to the acceptable rather than excellent predictive performance. Moreover, both the SEER database and RHWU cohort were retrospective studies, and thus inherent biases were more or less unavoidable. Then, some clinical features, such as serum CEA and microsatellite state, are also important in the estimation of survival of EOCRC. Unfortunately, these variables were not accessible from SEER database, which might discount the accuracy of our survival nomogram. Therefore, prospective researches with large study population from multiple hospitals are further necessary to provide more convincing evidences in the future.

We would like to thank Dr. Vikash for English language editing.