Result: In total 303 enrolled patients [median age was 51 years (range: 21-82)], 255 (84.2%) patients were at postmenopausal status at the start of Fulvestrant treatment and 264 patients (87.1%) had advanced breast cancer. The median PFS (95% confidence interval) was 14.1 months (10.1-18.0) for the first-line, 11.2 months (2.2-20.3) for the second-line and 6.7 months (4.8-8.5) for ≥third-line of Fulvestrant. The ORR and CBR were 3.8% and 86.8% for the first-line, 5.5% and 75.4% for the second-line, 1.1% and 61.1% for ≥third-line of Fulvestrant. The multivariate subgroup analyses showed, PFS was significantly longer for the patients with light tumor burden, less palliative chemotherapy before Fulvestrant and long disease-free interval. For patients receiving Fulvestrant after palliative chemotherapy, the median PFS was numerically greater in maintenance treatment group than those who progressed after chemotherapy. Only 5.0% of patients (15/303) experienced adverse events and majority were grade 1-2. The most common adverse event was headache and palpitation, with merely one patient had severe adverse event (pulmonary embolism).

Breast cancer (BC) ranks the most common cancer among women worldwide. In China, it was estimated that 405680 female patients are prone to breast cancer by 2025[1]. With the progression of diagnosis and treatment recently, the prognosis of breast cancer population has improved significantly. However, breast cancer is a heterogeneous tumor, and there are certain differences in the treatment and prognosis of different breast cancer subtypes. Around 60 - 70% of advanced BC have hormone receptor (HR) positive, human epidermal receptor 2 (HER2) negative (HR+/HER2˗) tumors[2, 3] , which is the hotspot of research.

Due to the expression of hormone receptors, endocrine therapy has become an important strategy for this subtype of breast cancer[4]. And because maintaining the quality of life is an important treatment goal for advanced breast cancer[5], international guidelines recommend endocrine therapy as the first-line therapy for HR+/HER2˗ advanced BC patients if these patients didn't have life-threatening disease, symptomatic visceral metastasis, or had resistance to prior endocrine therapy[6-8]. In addition to traditional selective estrogen receptor modulators (SERMs) and aromatase inhibitors (AIs), the emergence of Fulvestrant has added new treatment option for endocrine therapy. Fulvestrant, a selective estrogen receptor down-regulator (SERD), exhibits the characteristics of high affinity, complete inhibition of estrogen receptor (ER) nuclear translocation and without estrogenic effects[9-11]. At present, a series of clinical studies have determined the dose of fulvestrant 500mg [12-15], and other clinical studies comparing AIs have confirmed the efficacy and safety of Fulvestrant 500mg in HR+/HER2˗ advanced breast cancer[16-20]. Among them, the phase III FALCON trial which demonstrated Fulvestrant 500mg has a significant advantage over AIs in PFS (16.6 months vs 13.8 months), becomes an important basis for the choice of first-line endocrine therapy for HR+ advanced breast cancer post-menopause patients[17]. And the efficacy of Fulvestrant in the visceral metastasis subgroup in the study failed to show advantage over AIs[17]. Another clinical study have reached a similar conclusion that presence of visceral metastasis was a risk factor for the efficacy of fulvestrant[21]. On the contrary, a meta-analysis comparing Fulvestrant therapy with aromatase inhibitors by Graham et al showed that women with visceral metastasis derive higher benefits from Fulvestrant treatment[22].

Despite the substantial evidence suggesting the efficacy of Fulvestrant by randomized control trials (RCTs), there is paucity of available literature regarding the safety and effectiveness of Fulvestrant 500mg in the real-world settings of patients with advanced breast cancer. The study population of current real-world data, which is different from those Chinese patients with characteristic of younger age of diagnosis, higher proportion of premenopausal and primary stage IV breast cancer, cannot well represent the actual situation of China[23-26]. In addition, the research concerning Chinese breast cancer population has the limitation of small sample size[27]. Therefore, the present retrospective study is conducted to assess the efficacy and safety of Fulvestrant 500mg by larger sample in real-world settings and to assess the risk factors affecting Fulvestrant 500mg among Chinese HR+/HER2˗ advanced breast cancer patients.

This real-world study was conducted at the department of breast oncology in Beijing Cancer Hospital between January 2015 to December 2018.

The inclusion criteria were women with histologically confirmed HR positive (ER positive and/or PgR positive) advanced breast cancer and received at least once evaluation during Fulvestrant 500mg treatment. Fulvestrant was administered on days 1,15 and every 28 days thereafter. Key exclusion criteria were HER2 positive, combined medication with cyclin-dependent kinase (CDK) 4 and 6 inhibitors, mammalian target of rapamycin (mTOR) inhibitor or chemotherapy. The ovarian function suppression was allowed on the condition that the patient was premenopausal. In total, 303 patients were included and excluding HER2 positive patients (n=28) and combined medication with CDK 4/6 inhibitor or mTOR inhibitor (n=13) (Figure 1).

Flowchart of this study 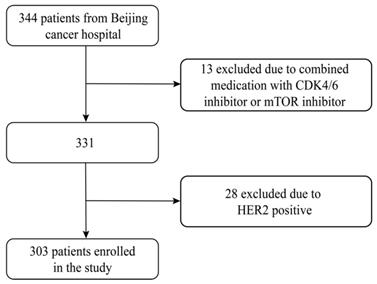 Fulvestrant was administered intramuscularly at a dose of 500mg on days 1, 15, and every 28 days thereafter, as two 5mL injections at each buttock.

SPSS 23.0 was used for all statistical analyses. Estimation of survival was performed using the Kaplan-Meier method, and differences between survival curves were assessed with the log-rank test. Univariate and multivariate analyses with Cox proportional hazards regression models were used to identify independent prognostic factors. A two-sided p value<0.05 was considered significant.

In total, 303 patients were enrolled in this study. The median age was 51 years (range: 21-82). 255 (84.2%) patients were at postmenopausal status at the start of Fulvestrant treatment. The majority of the patients (264, 87.1%) had advanced breast cancer after radical surgery and 12.9% patients had primary stage IV breast cancer. More than three quarters of patients (77.6%) were diagnosed with invasive ductal carcinoma. The patients who showed high expression in HR (≥50%) were 70.3% and 212/264 (80.3%) patients had previously received adjuvant endocrine therapy. Around half of our patients (50.5%) had received AIs during adjuvant treatment. Sociodemographic and disease characteristics of the patients are presented in Table 1.

The status of metastases and treatment

*Numbers of patients received Fulvestrant as first endocrine therapy was 96 in total. 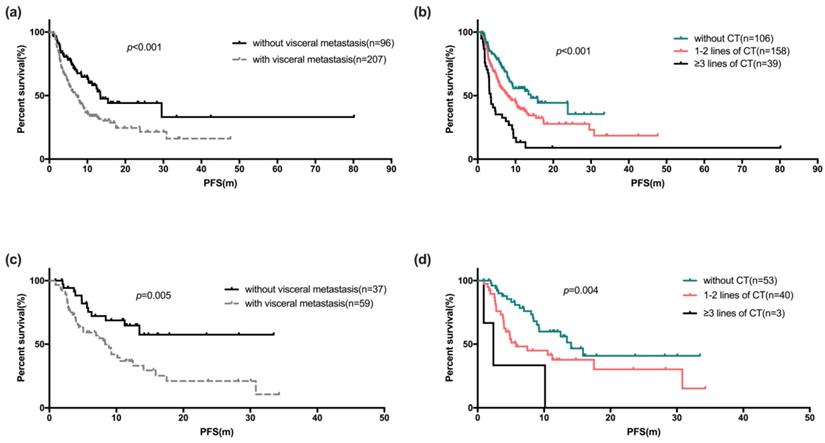 Univariate and COX regression analyses showed factors like patients with age ≥50 years (p=0.004), with no visceral metastases (p<0.001, Figure 3a), no liver metastases (p<0.001) and no chemotherapy for metastatic disease before Fulvestrant (p<0.001, Figure 3b) showed statistically significant difference (Table 3). Statistically significant difference in median PFS was also observed between the line of treatment of Fulvestrant (p=0.002) and the number of metastatic sites. However, statistically significant difference was not observed among the PFS in subgroup of patients with menopause status, HR status and Ki67 index. The COX regression model also showed that, the median PFS of Fulvestrant was significantly associated with DFS (p=0.027), number of metastatic sites (p<0.001), and previous chemotherapy for metastatic breast cancer (p=0.003). The median OS was not observed due to insufficient survival data.

Univariate and multivariate analysis of factors for progression-free survival

*Number of patients using Fulvestrant in first-line endocrine therapy after chemotherapy was 43.

Univariate and multivariate analysis for progression-free survival of visceral metastasis

In this retrospective, observation real-world study, we analyzed the efficacy and safety in patients with HR+/HER2˗ advanced breast cancer treated with Fulvestrant monotherapy, and assessed the factors influencing the treatment response. Overall, the study results suggest that the PFS of patients receiving Fulvestrant as first-line palliative treatment was significantly longer than second-line and later-line treatment. Also, PFS was found to be significantly longer for the patients with light tumor burden, less palliative chemotherapy before Fulvestrant and long disease-free interval.

To our knowledge, Fulvestrant is recommended to be the standard option for first-line endocrine therapy in HR-positive advanced breast cancer patients. The outcome of phase II FIRST study (CBR: 72.5%; median PFS: 23.4 months)[20, 30] and phase III FALCON study (CBR:78%; median PFS: 16.6 months)24 implied that Fulverstrant was more effective than third-generation aromatase inhibitors in patients without previous endocrine therapy. The real-world study from China and US reported that the PFS of Fulvestrant in first-line users were 15.67 months and 12.2 months respectively[24, 31]. However, in our study, only 17.5% (53/303) patients received Fulvestrant as the first-line treatment. The median PFS of patients receiving Fulvestrant as first-line treatment was significantly longer than second-line and later-line (p=0.002, 14.1, 11.2, 6.7 months respectively). This finding further implies that, the time to initiation of Fulvestrant treatment were essential factors influencing the treatment response. A multicenter retrospective study of 1072 patients with advanced/metastatic breast cancer who received Fulvestrant 500 mg in Japan reported by H. Kawaguchi et al. also concluded the use of Fulvestrant in the earlier line was more effective through multivariate analysis (HR=0.80, p<0.001) [32].

Compared to the other studies which assessed disease progression after prior endocrine therapy, including CONFIRM study (CBR: 45.6 %; PFS: 6.5 months)[15, 36], FINDER2 study (47.8%; 6.0 months)[12], and China COMFIRM study (48%; 8.0 months)[37], the median PFS of Fulvestrant second-line users (69.9%; 11.2 months) in our study showed equivalent or even better outcomes and discrepancy observed could be due to the difference in sensitivity to endocrine therapy. And also, nearly half or more of the enrolled patients in CONFIRM and FINDER2 study showed relapsed during adjuvant endocrine therapy, whereas in our study, 69 (22.8%) patients were primary resistant to endocrine therapy. However, this inference was consistent with clinical observation, but need further research and verification. In addition, results show second-line patients treated with Fulvestrant with chemotherapy or endocrine therapy in the first-line did not significantly affect the efficacy of Fulvestrant. This further suggests that, second-line use of Fulvestrant was also an effective regimen after chemotherapy.

Given the definition of subgroups from 15th St. Gallen International Breast Cancer conference 2017, there was no absolute boundary between the luminal A-like and the luminal B-like[41]. Current trends consider hormone receptor, proliferation index, grade as factors for judgement. In our study, we found that the level of hormone receptor expression and proliferation index were not significant related to the efficacy of Fulvestrant. This suggested that similar efficacy can be obtained with Fulvestrant in patients with luminal A-like or B-like.

With the recent emergence of cyclin-dependent kinase 4 and 6 inhibitors, the encouraging outcome of PFS even OS has made the combination therapy a considerable option for primary treatment of metastatic breast cancer. However, it accompanies with high financial burden and increased toxicity accordingly. Hence, Fulvestrant as primary endocrine therapy can be a preferred choice for selected patients with long disease-free interval, light tumor burden and less palliative chemotherapy before Fulvestrant.

This study has a relatively large sample size and features consistent with the Chinese breast cancer population[25, 26], the results can better reflect the actual situation of Chinese patients using Fulvestrant than the existing real-world studies in this direction. Our study has few limitations. Firstly, this was a single-center retrospective study. Secondly, there was no comparative arm to ensure Fulvestrant performance with other agents. And lastly, drug-resistance problem like other endocrine therapy was not assessed in our study. However, the main strength of our retrospective real-world study was the implication of this study results for both clinical practice and research.

We acknowledge Mr. Wenfa Huang (Department of Breast Oncology, Peking University Cancer Hospital and Institute) for technical assistance and guidance of software used in the work.

This study was approved by the Institutional Ethics Committee and written informed consent was obtained from all patients.