Cryotherapy shows no inferiority compared with radical Prostatectomy for low-risk and intermediate-risk localized Prostate Cancer: a real-world study from the SEER database

Background: For localized prostate cancer (PCa) with a low disease burden, whole-gland resection seems like overtreatment, while focal therapy, including cryosurgery, can achieve similar outcomes. We aimed at comparing the long-term survival outcomes of cryotherapy and radical prostatectomy (RP) and further exploring whether RP can be replaced by cryosurgery for those with low-risk PCa.

Methods: We conducted analyses from the Surveillance, Epidemiology, and End Results (SEER) database (2004-2015) and performed propensity score matching and used an instrumental variate to reduce the influence of bias and unmeasured confounders to the greatest extent.

Conclusion: RP ranked as the best treatment in regard to tumor control, but the advantages of cryotherapy became evident when taking functional and oncological outcomes into account, especially for low- and intermediate-risk PCa with low PSA levels.

Prostate cancer (PCa), the third most common malignancy in the USA, is ranked the sixth leading cause of cancer death in males, with an estimated 160,000 new cases diagnosed in 2017 [1,2]. With the widespread use of prostate-specific antigen (PSA) testing, an increasing number of men are diagnosed with localized PCa with a lower clinical stage, smaller volume and lower grade. Active surveillance is suggested for most individuals, due to the slight effect on overall survival. Once tumor progression occurs, radical treatments including radical prostatectomy (RP) and radiation therapy are suitable options according to EAU guidelines [3]. Although these interventions have long-term oncological control outcomes, side effects on genitourinary function cannot be avoided, such as incontinence, urinary symptoms, erectile function, and rectal side effects [4,5]. For those with low-grade and small-size PCa, whole-gland resection seems like overtreatment, while focal therapy, including cryosurgery, can limit toxicity by sparing the neurovascular bundles, sphincter, and urethra [6-8].

According to one single-arm research study including 370 individuals who underwent cryosurgery, results showed that the 10-year biochemical disease-free survival rates were 80.6% and 74.2% for the low- and intermediate-risk groups [9]. However, direct comparative data and long-term oncological outcomes are still lacking, as the relevant studies focus mainly on non-comparative single-arm case series [10]. As a result, no consensus has been reached on whether cryosurgery could be an alternative therapy to cure localized PCa.

Our study aims at comparing the long-term survival outcomes between cryotherapy and radical prostatectomy and further exploring whether RP can be replaced by cryosurgery for those with low-risk PCa.

From the Surveillance, Epidemiology, and End Results (SEER) database, consisting of 18 cancer registries in America and accounting for 26% of the US population, we identified patients diagnosed with adenocarcinoma of the prostate (International Classification of Diseases-O-3 code: C61.9) between 2004 and 2015. The TNM stages were evaluated according to the sixth edition of the American Joint Committee on Cancer Staging Manual [11]. Inclusion and exclusion criteria are shown in detail in the flowchart (Figure 1). Patients were stratified into two treatment groups: cryotherapy and RP. These selection criteria yielded 19,554 patients in total.

First of all, in the analysis of baseline characteristics, differences in continuous variables were evaluated with a two-tailed t test and presented as the mean ± standard deviation, whereas differences in categorical variables were compared with a two-tailed χ2 test (or Fisher's exact test) and presented as frequency with its proportion. Second, Cox proportional hazards regressions were performed to assess cancer-specific mortality (CSM) and overall mortality (OM) between treatment groups in the crude models and adjusted-covariate models. In the process of matching, propensity scores were estimated with logistic regression, with treatment (cryotherapy and RP) as the outcome and age, clinical T stage, GS, and PSA level as pretreatment, prognostic covariates. The matched baseline characteristics between the two groups were regarded as balanced when p > 0.05. In the original cohort, cumulative incidence survival curves were obtained with Kaplan-Meier methods.

Considering the selection bias and unmeasured confounders, we additionally used an instrument variate (IVA) to calculate them. We selected the regional utilization rate as the IVA in the two-stage residual inclusion analysis [12-15]. Afterward, another multivariate Cox proportional hazard model, including all covariates and residuals, was presented to illustrate the results more precisely.

All analyses were performed with the statistical software packages R (http://www.R-project.org, The R Foundation) and EmpowerStats (http://www.empowerstats.com, X&Y Solutions, Inc., Boston, MA). A p value of <0.05 was considered statistically significant. 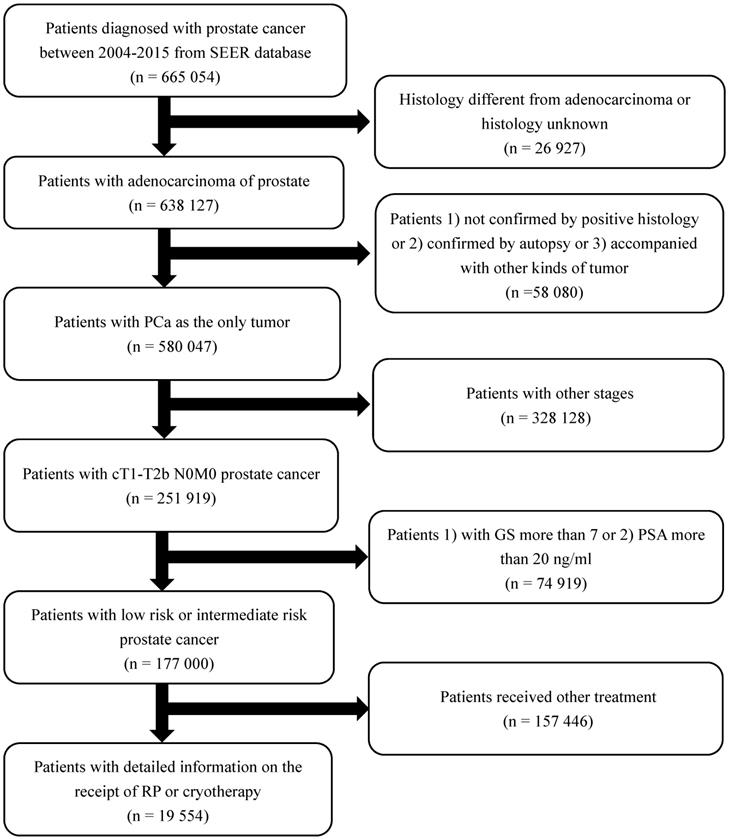 Descriptive characteristics of 19,554 patients that underwent either cryotherapy or radical prostatectomy between 2004 and 2015 from the Surveillance Epidemiology and End Results database

Descriptive characteristics of 2,060 patients received RP versus cryotherapy after propensity score matching (ratio 1:1) between 2004 and 2015 from the Surveillance Epidemiology and End Results database

The sensitivity analyses demonstrated similar survival outcomes in the comparison of cryotherapy and RP. The IPTW- and SMRW-adjusted models both showed no clear superiority in terms of reducing CSM after the adjustment of confounders (HR = 0.88, 95% CI 0.67-1.15, p = 0.35 and HR = 0.67, 95% CI 0.41-1.10, p = 0.12, respectively) (Table S2). The propensity score-adjusted model also reached the same outcome. With regard to a decline in CSM, no obvious differences were observed between the two therapies.

Currently, cryotherapy occurs as a new primary or salvage treatment of PCa since its first use [16,17]. Cryotherapy induces tumor apoptosis by promoting protein denaturation and the destruction of cellular membranes by using extremely low temperature, which then leads to vascular stasis and microthrombi and causes ischemic necrosis of the tumor tissue [18-21].

Several studies show that focal cryotherapy presents encouraging short-term outcomes [22-25]. However, most of these studies were single-arm designed, with few focusing on the effectiveness comparison of RP and cryotherapy. Our study examined long-term oncologic outcomes with a follow-up duration of 72 months (range: 43-103 months). According to our results, for low- and intermediate-risk PCa, cryotherapy shows no significant difference in decreasing CSM compared with RP, but is also no match for RP in OM decline. 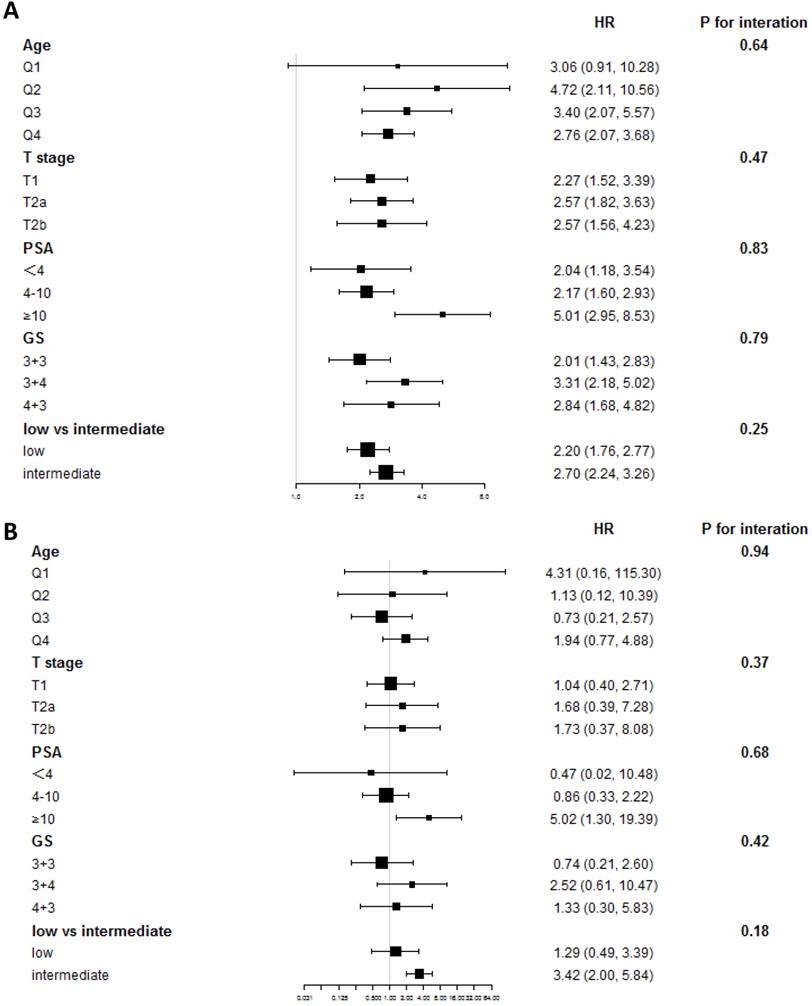 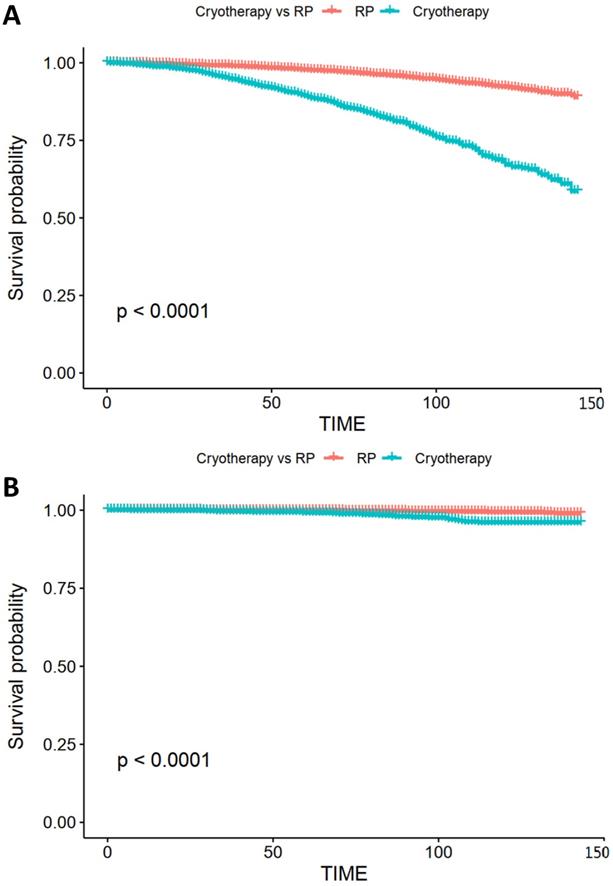 Additionally, one retrospective matched-pair cohort including 68 individuals in each group showed that oncologic outcomes after focal cryosurgery versus RP were similar in regard to the need for salvage therapy (p = 0.55) [26]. This research also reported that those who received cryosurgery had a 70% reduction in the PSA level (pre-cryotherapy means PSA 5.9 ng/ml and post-cryotherapy means PSA 1.6 ng/ml), indicating that cryosurgery indeed limited the progression of the disease, with an effectiveness similar to RP. In a larger sample size study (n = 1160), patients who received focal cryotherapy showed a 75.7% biochemical recurrence-free rate at 36 months [27], and the postoperative biopsy was positive in only 3.7% of patients. Nevertheless, survival outcomes after cryotherapy were not analyzed in this study. Another single-arm study, including 26 participants who underwent focal cryosurgery of the prostate, reported that only three cases experienced biochemical failure, and after salvage conventional definitive therapy, they recovered favorable PSA nadirs [28]. Similar function preservations of cryotherapy were observed in other studies [29-31], but all these failed to compare cryotherapy and RP in the analysis of long-term survival outcomes.

Most research has focused on low- and intermediate-risk PCa, while several studies included patients of high risk. According to Masakatsu Oishi et al. [32], among those who underwent cryotherapy, high-risk patients were more likely to suffer clinical recurrence (p = 0.046), based on the Kaplan-Meier survival curve and trend toward statistical significance (p = 0.06) on multivariate analysis. Therefore, the authors suspected that cryotherapy might not be suitable for high-risk PCa, but could become an alternative option for low- and intermediate-risk PCa. Another prospective study that enrolled intermediate- and high-risk individuals showed no discrepancy between the two risk groups [33]. More interestingly, when stratified based on PSA levels at 10 ng/ml, subgroup analyses showed that patients with PSAs higher than 10 ng/ml were more likely to develop disease recurrence. In this study, the PSA level played a more important role than GS for high-risk PCa, while similar results were observed in our study for those with intermediate-risk PCa. However, more research is needed to explore whether high-risk participants with low PSA levels could benefit from cryotherapy in regard to oncological outcomes, with the exception of functional outcomes.

A major strength of our data comes from the large sample database and direct comparison of cryotherapy and RP. We performed various analyses to verify the effect of cryotherapy on tumor control. The results all showed that cryotherapy was similar to RP in decreasing CSM. Most studies have focused on the short-term outcomes, such as biochemical recurrence and clinical failure. Our research further explored the survival outcomes and could prove to be a valuable reference in choosing the proper treatment.

Some limitations also need to be highlighted. First, the nature of the retrospective study could not be overcome entirely, although we performed propensity score matching to assume randomization. Second, other assessments of patients were not recorded in the SEER database, such as the Charlson Comorbidity Index and the ECOG score. However, we used an IVA to calculate the unmeasured confounding and make the result more precise. Third, functional outcomes, including urinary incontinence and ejaculation dysfunction (ED), were also not presented in the database. According to the present studies, 0%-3.6% incontinence and 0%-42% ED rates were reported among those who received cryotherapy [34], with fewer complications than RP. In addition, outcomes including disease recurrence and biochemical recurrence were not assessed in our study due to the lack of relevant data. Additionally, as cryotherapy was not implemented in our center, we failed to perform the external validation by using data from our center, thus weaken the accuracy of our results.

For those with low- and intermediate-risk PCa, cryotherapy could achieve results similar to RP in regard to tumor control. With regard to the preservation of functions, cryotherapy could become a better option. For patients with higher PSA levels, cryotherapy failed to provide survival benefits compared with those who underwent RP. In a word, RP ranked the best treatment in terms of tumor control, but the advantages of cryotherapy became evident when taking both functional and oncological outcomes into account, especially for low- and intermediate-risk PCa with lower PSA levels.

All authors contributed to the planning and design of the study. K.J. and S.Q. were involved in review of the raw data and directly involved in the analysis. J.K.L. and X.N.Z. provided analytical feedback based on aggregated results. X.T. and X.Y.L. drafted the manuscript, with input from all authors. Y.Y.L. was responsible for the chart making. All authors provided substantive review and commentary on multiple drafts and approved the final version. K.J. and S.Q. had full access to all of the data in the study and takes responsibility for the integrity of the data and the accuracy of the data analysis.