Cholangiocarcinoma (CCA), derived from epithelial cells of the biliary tract, is the second most frequent primary hepatic malignancy [1]. CCAs are divided into three categories as intrahepatic (iCCA), perihilar (pCCA), and distal (dCCA) according to their anatomical locations, and the international classification of CCA aggregates the pCCA and dCCA into one type. The optimal curative treatment for CCA is complete surgical resection; unfortunately, most patients are diagnosed as advanced-stage at presentation that is not amenable to surgery. The chemotherapy (gemcitabine plus cisplatin) is the first-line treatment for patients with advanced-stage CCA, irrespective of anatomical subtypes; however, the median overall survival is only less than one year [2]. Thus, there is a tremendous need to seek new therapeutic agents for CCA therapy. In recent years, a number of natural products have aroused the interests of researchers for CCA treatment [3, 4]. For instance, a recent study showed that genistein, an isoflavone rich in soybeans, could remarkably inhibit cell proliferation of two iCCA cell lines by inactivating epidermal growth factor receptor (EGFR) and protein kinase B (Akt) [3]. Luteolin, a group of flavonoids distributed in vegetables and fruits, was also found to significantly decrease CCA cell viability and induce apoptosis [4].

Dihydromyricetin, the most abundant natural flavonoid and active compound in Ampelopsis grossedentata W.T. Wang (Vitaceae) used as herbal tea and traditional Chinese medicines for over hundreds of years in China, has been reported to show potent anti-tumor effects in vitro and in vivo studies [5, 6]. For instance, dihydromyricetin combined with irinotecan chemotherapy remarkably delays the progression of colon cancer in mouse models [5]. However, it has not been reported if dihydromyricetin exerts any anti-tumor effects in CCA yet.

MicroRNAs are short single‑stranded RNAs that play important roles in gene expression regulation at the post‑transcriptional level in many diseases including cancers [7]. MicroRNA-21 (miR-21) is an oncogene in various types of human tumors. Recent studies indicate that miR-21 may be a potential diagnostic and prognostic biomarker for CCA [8, 9]. As our previous study found that dihydromyricetin had great anti-atherosclerosis effects though regulating miR-21 [10], we were interested to investigate whether dihydromyricetin could exert anti-tumor effects in human CCA cell lines, and whether the underlying mechanism was through regulating miR-21. Our study might provide a possible strategy for the treatment of CCA.

The effects of dihydromyricetin treatment on cell viability were assessed using a Cell Counting Kit-8 (CCK-8) (Dojindo, Japan) assay. Briefly, cells were pre-cultured in 96-well plates and exposed to different concentrations of dihydromyricetin for 24 hrs. Then cell culture medium was replaced with 10 μL CCK-8 solution in each well, and cells were incubated for 1 h at 37 °C. The absorbance of the solution was measured at 450 nm using a Microplate Reader (Bio-Rad, USA).

Cell proliferation was examined by the EdU assay (Beyotime, China). After treatments, cell culture medium was replaced with fresh medium containing 10 μM EdU and cells were incubated for 3 hrs. Then cells was fixed in 4% Paraformaldehyde for 15 min and incubated in 0.3% Triton-X 100 for 15 min, followed by Click buffer incubation for 30 min in dark at 37 °C and counterstained with Hoechst for 10 min. Finally, EdU-positive cells, DAPI-labeled cells and their merged images were captured under a fluorescence microscope (Zeiss, Germany).

Cell invasion and migration and assays

Cell invasion and migration were detected by using the Transwell assay with a pore size of 8 μM (Millipore, USA). For cell invasion, Transwell chambers with BD MatrigelTM Matrix (BD, USA) were used. After treatment, cells were re-suspended in the upper chambers with no-serum medium, and the lower chambers were supplemented with medium containing 10% FBS. After incubated for 24 hrs, cells on the lower side of the filter were fixed with 4% paraformaldehyde for 15 min and stained with 0.4% crystal violet (Merck, Germany) for 15 min. Finally, cells were counted and photographed under microscope. The method of cell migration was similar, except using chambers without BD Matrigel. 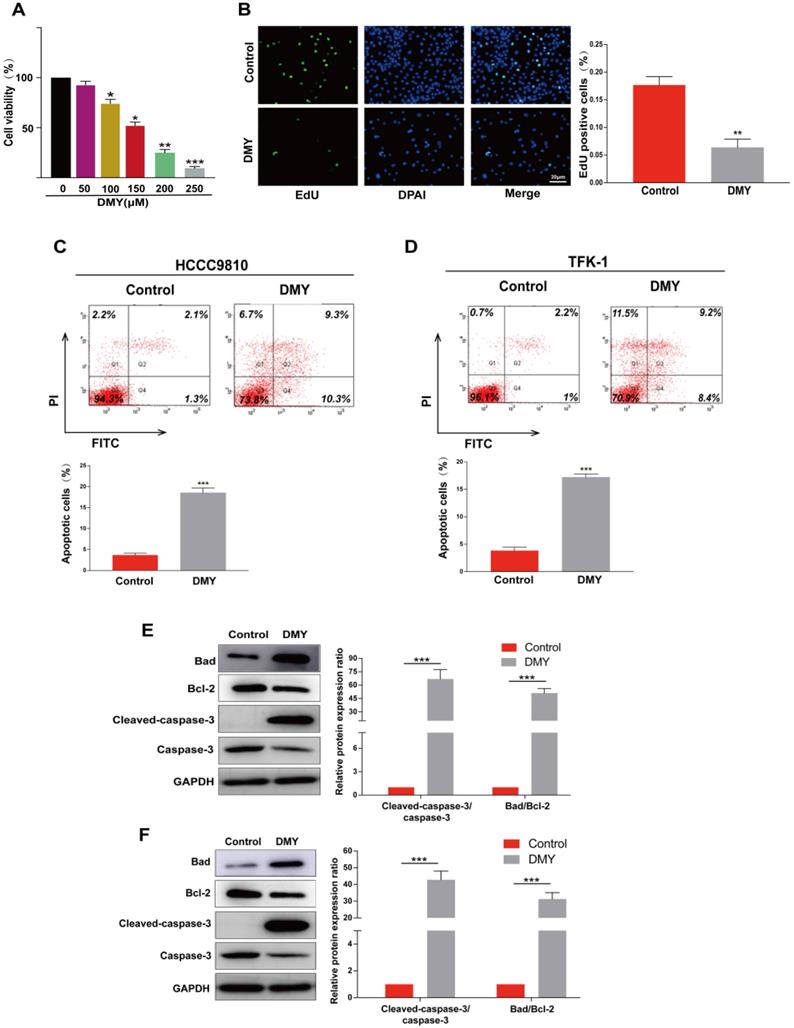 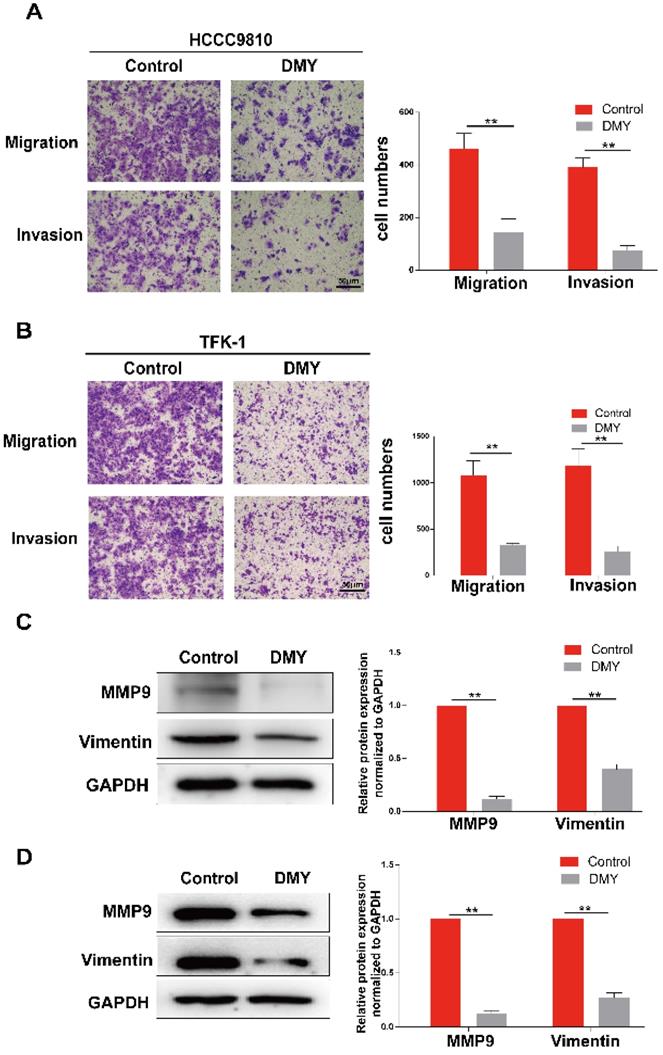 Overexpression of miR-21 abolishes the inhibitory effect of dihydromyricetin on cell proliferation and promoting cell apoptosis. HCCC9810 or TFK-1 cells were transfected with 100 nM miR-21 agomir or agomir non-specific control (NC), and then treated with or without 150 μM dihydromyricetin for 24 hours. (A) Real time qPCR analysis for assessing the relative expression of miR-21 in HCCC9810 cells. (B) EdU assay for assessing cell proliferation in HCCC9810 cells. All values are presented as the mean ± SEM, *P < 0.05, **P < 0.01, ***P < 0.001. 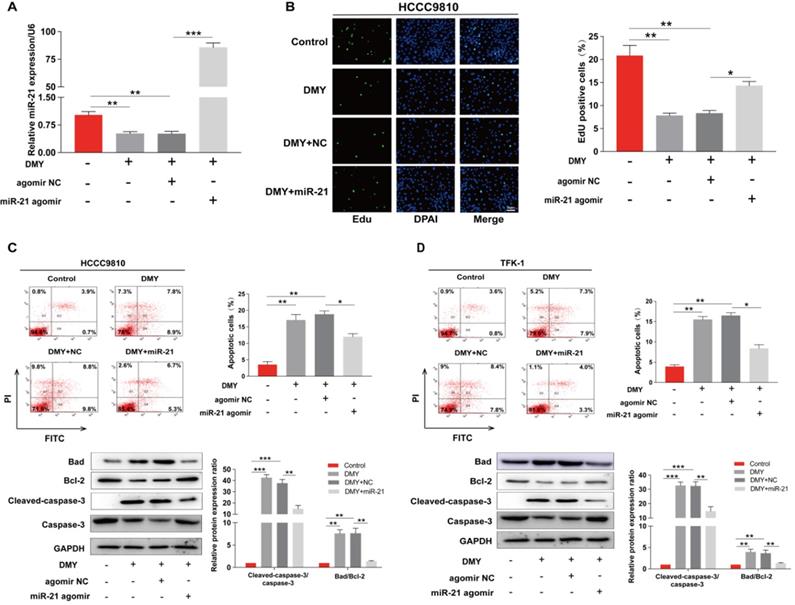 Natural products have been attracting huge attention due to their broad biological activities with satisfying safety in human health care used as functional foods, health products or medicine. Dihydromyricetin, the main natural product isolated from the plant Ampelopsis grossedentata, has been widely investigated and shows a variety of biological functions, including ameliorating nonalcoholic fatty liver disease [14], anti-diabetes [15] and anti-atherosclerosis [10]. In recent years, accumulating in vitro and in vivo studies have been conducted to explore its broad anti-tumor effects [5, 6]. One study has shown that dihydromyricetin could inhibit cell growth and induce cell apoptosis in the hepatocarcinoma cells, and the underlying mechanism was through inhibiting the Akt/Bad signaling pathway and activating the mitochondrial apoptotic pathway [16]. Considering the close anatomical position of the liver and biliary system, we were interested to explore whether dihydromyricetin also had anti-tumor effects in CCA. As expected, dihydromyricetin exerted significant anti-tumor effects in two human CCA cell lines manifesting as inhibiting cell proliferation, migration, invasion and promoting cell apoptosis (Figure 1 and 2). As dihydromyricetin had little cytotoxicity in human beings and modern pharmaceutics technology has helped to improve its solubility, stability and bioavailability, this natural product may be explored as a novel adjuvant agent for CCA treatment with further in vivo evidence.

It is well established that proliferation is crucial in tumor development and progression. In cancer cells, the signaling pathways controlling the proliferative response in normal cells are disturbed, resulting in the rapid growth of cancer cells that invade surrounding tissues and metastasize to distant sites [17]. In this study, we found that 150 µM of dihydromyricetin suppressed about 60% of cell proliferation compared to control cells as evaluated by the EdU assay. Cancer cells are often resistant to apoptosis, a programmed cell death by which cells undergo death to restrict cell proliferation or in response to DNA damage. There are two major signaling cascades of apoptosis, including the extrinsic pathway such as tumor necrosis factor-related apoptosis and the intrinsic Bcl-2 family pathway launching the activation of caspases 9, 3 and 7 [18]. By using the flow cytometry assay, we showed that dihydromyricetin remarkably induced cell apoptosis in CCA cells. Western Blot showed that expressions of cleaved‑caspase‑3 and the Bad/Bcl-2 ratio were significantly up-regulated following dihydromyricetin treatment. These results indicate that regulating the intrinsic Bcl-2 family pathway is an important mechanism of dihydromyricetin inducing cell apoptosis, similar to previous studies in other cancer cells such as ovarian cancer and hepatocellular carcinoma [19, 20]. Of note, a recent study showed that co-administration of Adriamycin (ADR) with dihydromyricetin significantly increased ADR-induced apoptosis, and the mechanism was not only related to the mitochondrial apoptosis but also associated with endoplasmic reticulum as the ROS levels and caspase-12 protein expression were increased [21]. We will investigate if dihydromyricetin affects the endoplasmic reticulum related apoptosis in CCA in our further studies.

Overexpression of miR-21 alleviates the inhibitory effect of dihydromyricetin on cell migration and invasion. HCCC9810 or TFK-1 cells were transfected with 100 nM miR-21 agomir or agomir non-specific control (NC), and then treated with or without 150 μM dihydromyricetin for 24 hours. (A and B) Transwell assay for evaluating cell migration and invasion. (C and D) Western blot for assessing the expressions of related proteins. All values are presented as the mean ± SEM, *P < 0.05, **P < 0.01, ***P < 0.001. 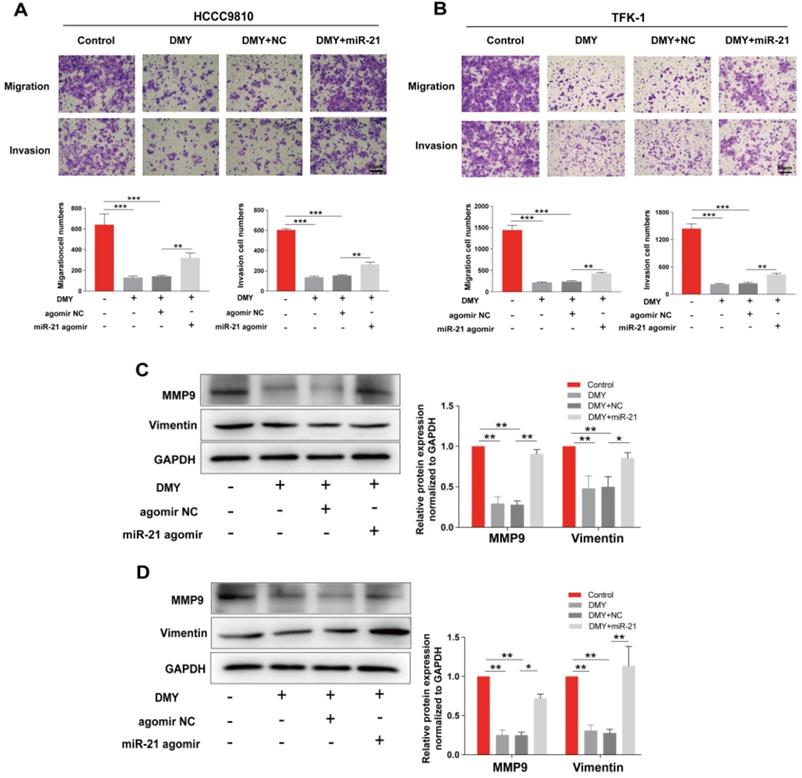 Dihydromyricetin regulates the miR-21/ PTEN/ Akt axis in HCCC9810 cells. HCCC9810 cells were transfected with 100 nM miR-21 agomir or agomir non-specific control (NC), and then treated with or without 150 μM dihydromyricetin for 24 hours. Western blot was used to determine the expressions of related proteins. All values are presented as the mean ± SEM, *P < 0.05, **P < 0.01.

Recently, a number of miRNAs including miR-424-5p [25] and miR-876 [26] have been reported to regulate cell proliferation, apoptosis, migration and invasion in CCA. MiR-21 is considered as a potential diagnostic and prognostic biomarker for CCA [8, 9]. The plasma level of miR-21 is significantly upregulated in patients with CCA compared to healthy population [8] and CCA patients with elevated expression of miR-21 were related to poor survivals [9]. By analyzing the Cancer Genome Atlas (TCGA) database, we confirmed that the expression level of miR-21 in CCA tumor samples is significantly higher than that in paired normal tissue (Figure 3). So far, there has been no study to report that dihydromyricetin exerts the anti-tumor effect by modulating miRNA. However, recent studies by Yang et al. found that dihydromyricietin administration significantly restored the abnormal upregulation of miR-34a and ameliorated renal fibrosis in model mice [27]. Moreover, our previous study has shown that dihydromyricetin attenuates TNF-alpha-induced endothelial dysfunction through regulating miR-21 in HUVEC cells [10]. These studies indicate that regulating miRNA is an important mechanism of dihydromyricetin to exert its biological activities. Based on the above studies, we speculated that the mechanism of its anti-cancer effects in CCA was through regulating miR-21. In order to prove the hypothesis, firstly, we detected the levels of miR-21 after treatment of different concentrations of dihydromyricetin. As expected, the expression of miR-21 was inhibited by dihydromyricetin in a dose-dependent manner (Figure 3). Next, we conducted the rescue experiment in which overexpressed miR-21 by transfection with agomir in two CCA cell lines. In line with our speculation, overexpression of miR-21 partly abolished the anti-tumor effects of dihydromyricetin (Figure 4 and 5). These data indicated that the mechanism of dihydromyricetin exhibiting its anti-tumor effects is through modulating miR-21.

PTEN, a well‑known tumor suppressor involved in regulating cell growth and apoptosis in multiple cancers, is an important downstream target of miR‑21. miR‑21 inhibits the expression of PTEN by directly targeting its 3'-UTR [28]. By analyzing the TCGA database, we showed that the expression of PTEN in CCA tumor samples is significantly lower than that in paired normal tissue, confirming that miR-21 negatively modulates the expression PTEN (Figure 3). Akt, which transduces signals from growth factors and oncogenes to downstream targets resulting in tumor development, is one of the most frequently hyperactivated signaling pathways in human cancers. The PTEN/Akt pathway has been reported to modulate cell apoptosis in multiple cancer cells. For instance, Zhu et al reported in CCA cells that upregulation of PTEN promotes cell apoptosis via downregulation of the Akt signaling pathway, while blockage of PTEN abolished the effects [29]. Recently, several studies have reported that the miR-21/PTEN/Akt axis plays a significant role in modulating cell apoptosis [11, 12] in multiple cancer cells. Thus, inhibiting the miR-21/ PTEN/ Akt axis is an essential mechanism of endogenous or exogenous anti-cancer substances. In this study, we showed that dihydromyricetin treatment inhibited the expression of miR-21 and phosphorylated Akt and upregulated the expression of PTEN compared to control cells, while overexpression of miR-21 abolished the effect of dihydromyricetin on the expression of PTEN/ Akt (Figure 6). These data indicate that dihydromyricetin exerting the anti-tumor effects in CCA cells is through regulating the miR-21/PTEN/Akt axis and the miR-21/PTEN/Akt axis may be an important target for CCA treatment.

29. Zhu B, Wei Y. Antitumor activity of celastrol by inhibition of proliferation, invasion, and migration in cholangiocarcinoma via PTEN/PI3K/Akt pathway. Cancer Med. 2020;9(2):783-96