Background: Circular RNAs (circRNAs) have been reported to play important roles in cancer progression. However, the potential involvement of circRNAs in breast cancer metastasis to the lung remains unclear.

Results: We found that circNFIC (hsa_circ_0002018) was the most downregulated circRNA in lung metastatic tissues. Kaplan-Meier survival analysis revealed that low levels of circNFIC were related to poor outcome of breast cancer. Further experiments revealed that overexpressing circNFIC suppressed breast cancer cell proliferation and migration to the lung. A mechanistic study showed that circNFIC acted as a sponge for miR-658 and competed for binding to miR-658 with UPK1A, leading to increased expression of UPK1A.

Conclusion: Our study highlighted the regulatory function of the circNFIC/miR-658/UPK1A pathway in breast cancer progression, which could be a potential therapeutic target for breast cancer.

circRNAs are considered important regulators and biomarkers of cancer progression. Furthermore, circRNAs have been shown to function as miRNA sponges or competitive endogenous RNAs (ceRNAs) [4]. In triple negative breast cancer, circAGFG1 promoted cell proliferation, mobility and invasion by acting as a ceRNA of miR-195 to relieve the repression of cyclin E1 expression [5]. Moreover, circ_0006528 promoted breast cancer cell proliferation, invasion and migration by sponging miR-7 to promote the expression of Raf1 and activate the MAPK/ERK pathway [6]. All these studies suggest that circRNAs are potential therapeutic targets and prognostic predictors for breast cancer and deserve deeper exploration.

In this study, we performed high-throughput circular RNA microarray assays of primary breast cancer tissues and lung metastatic tissues to explore the potential involvement of circRNAs in breast cancer lung metastasis. Kaplan-Meier survival analysis and a series of experiments were conducted to analyze the clinical significance and functions of the selected circRNA in breast cancer. The regulatory effects and potential mechanisms of the selected circRNA on a miRNA and its target genes were further investigated.

Cell proliferation was assessed by CCK-8 assay (Dojindo Laboratories, Japan). Cells (1×103) were seeded into 96-well plates, and CCK-8 solution (10 μl) was added 48 h after transfection. After 2 h of incubation at 37 °C, the absorbance at 450 nM was measured in a microtiter plate reader (Bio-Tek EPOCH2, USA).

Cells were seeded in 6-well plates at a density of 1×103 cells/well and incubated at 37 °C for 2 weeks. Colonies were fixed in methanol, stained with 0.1% crystal violet, imaged and counted.

Cells (2×106) were subcutaneously injected into the dorsal flanks of 4-week-old female BALB/c nude mice (three mice per group), and the mice were then treated with an intratumoral injection (40 μL NC or circNFIC) every 4 days. Xenografts were excised under anesthesia after 4 weeks, and the tumor weights were measured.

For lung metastasis studies, 1 × 105 cells were injected into the tail veins of mice (three mice per group). After 8 weeks, the lungs were excised under anesthesia, and the numbers of macroscopically visible lung metastatic nodules were counted and validated by assessment of hematoxylin and eosin (HE)-stained sections by microscopy.

Cells (5×103) were seeded and cotransfected with the corresponding plasmids and miR-658 mimics using Lipofectamine 2000. After 48 h of incubation, luciferase activities were quantified with a Dual-Luciferase Reporter Assay System (Promega, USA).

Cells were cotransfected with MS2bs-circNFIC, MS2bs-circNFIC-mt or blank control MS2bs-Rluc together with MS2bp-GFP using Lipofectamine 2000. After 48 h, RIP was performed with a GFP antibody (Roche, USA) and a Magna RIP RNA-Binding Protein Immunoprecipitation Kit (Millipore, USA). The RNA complexes were then purified, and the level of miR-660 was quantified.

For the RIP assay for Ago2, 48 h after transfection, RIP was performed with an anti-Ago2 antibody (Millipore), and the levels of circNFIC, UPK1A and miR-658 were measured.

Comparisons between groups were analyzed using t tests. Kaplan-Meier plots and log-rank tests were used for the survival analysis. Unless otherwise indicated, the data are presented as the mean ± S.D. of three independent experiments. P < 0.05 was considered statistically significant. The statistical analysis was performed using SPSS 19.0 software.

circNFIC is downregulated in breast cancer and correlated with poor outcome

To investigate the potential involvement of circRNAs in breast cancer metastasis to the lung, we performed high-throughput circular RNA microarray assays of primary breast cancer tissues and lung metastatic tissues. Hierarchical clustering showed the top 20 upregulated and downregulated circRNAs based on fold change ≥ 2 (Figure 1A). Reactome pathway analysis of the linear mRNA transcripts corresponding to the circRNAs revealed that the corresponding linear mRNAs were related to cell cycle pathways (Figure 1B). Moreover, GO analysis showed that the corresponding linear mRNAs were related to cell cycle progression, indicating their potential involvement in cancer progression (Figure 1C). Among the top 20 downregulated circRNAs, hsa_circ_0002018 decreased the most in lung metastatic tissues; therefore, we decided to study this circRNA. Hsa_circ_0002018 (chr19: 3449011-3452664) was predicted to derive from nuclear factor I C (NFIC) by the human reference genome (GRCh37/hg19). Thus, we named hsa_circ_0002018 "circNFIC".

% indicates percentage within the row.

** The case number does not add up to the total in several categories because a few patients were excluded from those categories. 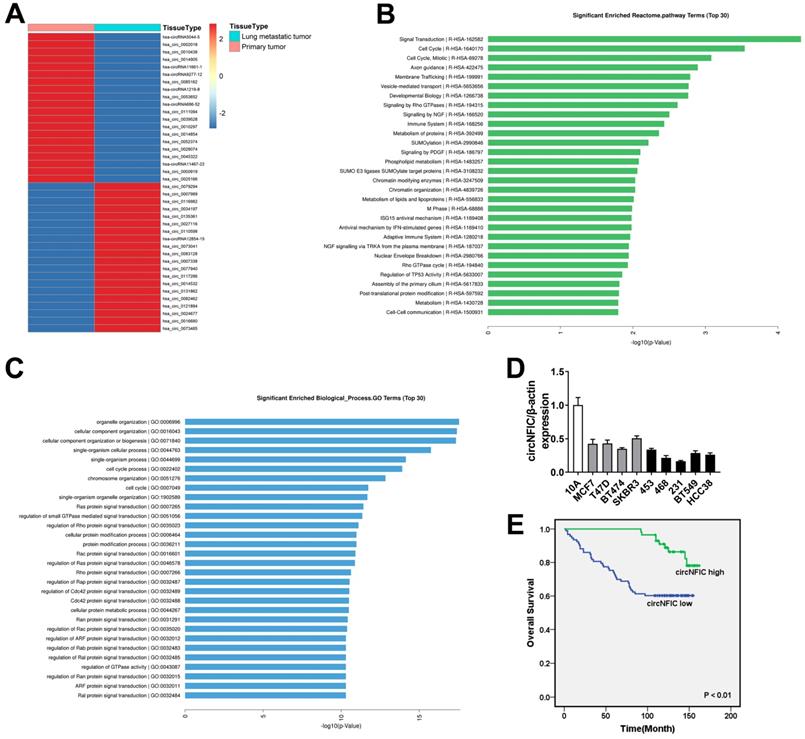 circNFIC acts as a sponge for miR-658

Next, we detected the intracellular location of circNFIC and found that circNFIC predominantly localized in the cytoplasm, indicating that circNFIC might function as a miRNA sponge (Figure 3A). Therefore, we used Circular RNA Interactome (https://circinteractome.nia.nih.gov/index.html) to predict the potential circRNA/miRNA interactions, and binding sites for miR-658 were found within the circNFIC sequence (Figure 3B). We then detected the expression of miR-658 in breast cancer cell lines and found that miR-658 was upregulated (Figure 3C). A luciferase reporter assay showed that the luciferase activity was reduced after cotransfection of the wild-type luciferase reporter and miR-658 mimics, while the mutated luciferase reporter exerted no such effect (Figure 3D). To confirm the direct binding of circNFIC and miR-658, a RIP assay was performed. The results showed that miR-658 was predominantly enriched in RNAs retrieved from MS2bs-circNFIC, indicating that circNFIC directly interacts with miR-658 and could act as a sponge for miR-658 (Figure 3E). 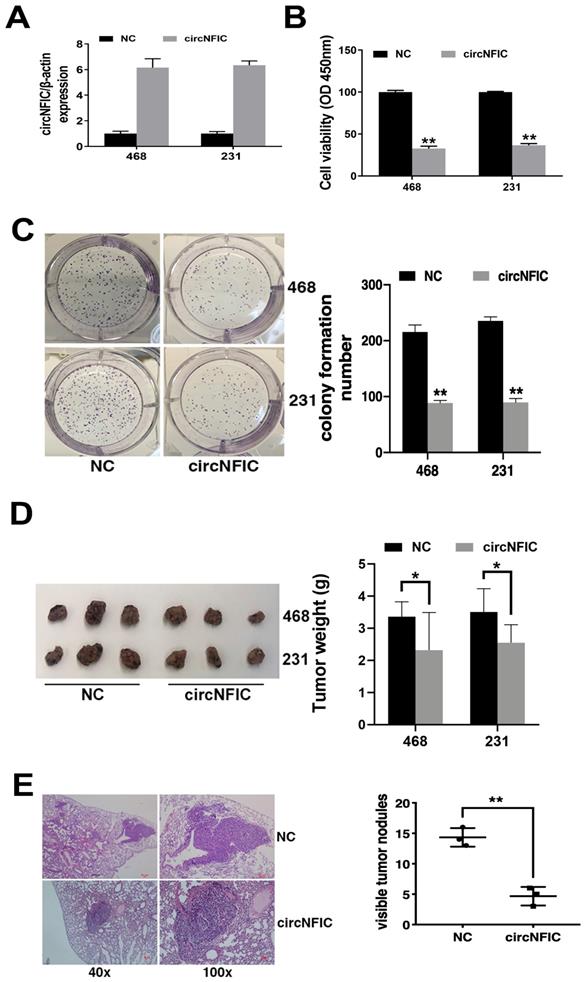 circNFIC acts as a sponge for miR-658 A. The levels of nuclear control transcript (18S), cytoplasmic control transcript (GAPDH) and circNFIC were assessed in nuclear and cytoplasmic fractions. B. The predicted binding sites of miR-658 within the circNFIC sequence. C. The expression of miR-658 in breast cancer cell lines. D. Luciferase assay of cells cotransfected with miR-658 mimics and wild-type or mutant luciferase reporter. E. MS2-based RIP assay in cells transfected with MS2bs-circNFIC, MS2bs-circNFIC-mt or control. **P < 0.01

Metastasis accounts for approximately 90% of cancer patient deaths [7]. Noncoding RNAs have been reported to be critical for the metastatic ability of cancer cells and therefore have been considered potential therapeutic targets [8]. In breast cancer, ectopic miR-126 expression significantly suppressed the formation of lung metastases, while suppressing miR-126 significantly increased the ability of breast cancer cells to metastasize to the lung [9]. For circRNAs, circANKS1B was found to be upregulated in triple-negative breast cancer and could promote breast cancer invasion and metastasis by inducing epithelial-to-mesenchymal transition [10], demonstrating that circRNAs could be therapeutic targets to better prevent breast cancer metastasis.

miR-658 was found to be highly expressed in gastric cancer tissues and cells [15]. Elevated circulating miR-658 was associated with tumor metastasis through activation of the PAX3-MET pathway [16]. Here, we found that miR-658 was upregulated in breast cancer cell lines, and circNFIC could directly interact with miR-658 and act as a sponge for miR-658 to regulate the expression of UPK1A, a target gene of miR-658. 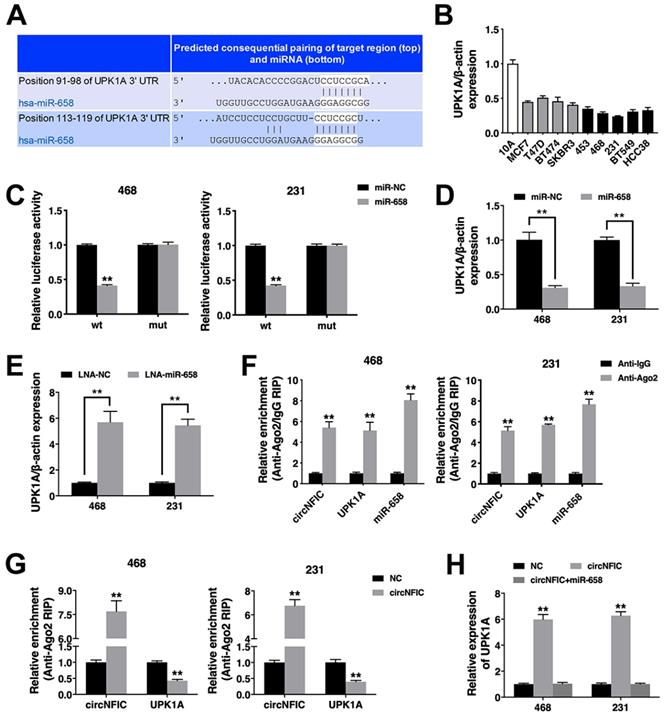 Taken together, our study indicates that circNFIC is downregulated in breast cancer and is related to poor outcome. Overexpression of circNFIC inhibits cell proliferation and migration in breast cancer. Moreover, circNFIC functions as a ceRNA to regulate UPK1A expression by decoying miR-658. circNFIC can be used as a diagnostic biomarker and therapeutic target for breast cancer.

circNFIC could be used as a promising prognostic biomarker for breast cancer patients, and therapeutic targeting of the circNFIC/miR-658/UPK1A network may be a potential strategy for the treatment of breast cancer.

This study was approved by the Ethics Committees of Nanhua Affiliated Hospital and conducted according to the Helsinki Declaration. Informed consent was provided by all patients. The animal study was approved and conducted according to the guidelines of the Institutional Animal Care and Use Committee of Nanhua Affiliated Hospital.