Objective: Citron Rho-Interacting Serine/Threonine Kinase (CIT) was originally identified as a binding partner of active forms of the small GTPases Rho and Rac. This kinase participated in the regulation of cytokinesis and loss of CIT was associated with chromosomal instability. Here, we assume that CIT might be a potential prognostic biomarker for bladder cancer.

Materials and Methods: The expression and prognostic significance of CIT mRNA were validated on 5 published microarray data sets, including 948 bladder cancer cases. To further confirm the results, we collected 54 non-carcinomatous human bladder tissue samples and 315 bladder cancer tissues from Zhejiang Provincial People's Hospital to detect the protein level of CIT based on the immunohistochemistry analysis. The Kaplan-Meier method and Cox proportional hazards regression model were used in survival analysis.

Conclusions: In conclusion, these findings indicated that overexpression of CIT was significantly associated with poor survival outcome in bladder cancers. CIT might serve as a promising prognostic biomarker and therapeutic target for bladder cancers.

Citron Rho-Interacting Serine/Threonine Kinase (CIT), originally identified as a RhoA effector that could regulate myosin contractility by phosphorylating the myosin regulatory light chain, is localized at the cleavage furrow and at the midbody of dividing cells[1,2]. CIT binds to Rho-GTP and have been shown to be involved in the regulation of cytokinesis [3-5]. Loss of CIT causes failure of cytokinesis and therefore triggers apoptosis in the male germ cells and a specific population of neuroblasts [6,7]. In addition, CIT is demonstrated as a cell cycle dependent, nuclear protein required for G2/M transition of hepatocytes [8]. Predictably, imbalance of cell cycle is commonly selected for in evolving cancer cells [9]. Thus, it would be of significance to investigate the clinical role of CIT for cancer control.

All methods were carried out in accordance with relevant guidelines and regulations which are in compliance with institutional, national, or international guidelines.

Differential expression and coexpression of CIT in bladder cancer

To identify differentially expressed genes in bladder cancers, we analyzed the microarray data set available in the Oncomine database. (www.oncomine. org; accessed on September 30, 2017). The key words used were Gene: “CIT”, Cancer Type: “bladder cancer”, Analysis Type: “Cancer vs. cancer Analysis” and “Coexpression Analysis”. Detailed information about tissue collection and the experimental protocol of each study is available in the Oncomine database or from the original publications.

To evaluate the correlations between CIT expression and cancer-related pathways, gene set enrichment analysis (GSEA) was performed using the above bladder cancer microarray data set GSE31684. The detailed protocol of GSEA was available on the Broad Institute Gene Set Enrichment Analysis website (www.broad.mit.edu/gsea). Briefly, data sets and phenotype label files were created and loaded into GSEA software (v2.0.13). The gene sets were downloaded from the Gene Expression Omnibus GEO (http://www.cancergenome.nih.gov/geo/). Gene set permutations were performed 1000 times for each analysis. The normalized enrichment score (NES) was calculated for each gene set. GSEA results with a nominal P < 0.05 were considered significant [13].

Relationship of CIT expression with pathological parameters of bladder cancer

The human bladder cancer cells T24 (Grade III) and RT4 (Grade I) cell lines were purchased from American Tissue Culture Collection. T24 cells were cultured in MEM media and RT4 cells were cultured in McCoy's media. All media were supplemented with 10% FBS (Atlanta Biologicals Flowery Branch, GA, USA), 100 I.U. penicillin, and 100 µg/ml streptomycin and grown in an atmosphere of 5%CO2 at 37°C.

Total protein was extracted from cells lysed with the M-PER Mammalian Protein Extraction Reagent (Thermo) supplemented with the cocktail of protease inhibitors (Sigma). After blocking with 5% non-fat milk in Tris-buffered saline with Tween-20 (TBST) for 60 min, the membrane was incubated with the primary antibodies anti-human-CIT (1:2000, Abcam, UK) or anti-human ß-actin (1:5000, Santa Cruz Biotechnology, USA) dissolved in 5% bovine serum albumin in TBST overnight at 4°C.

Immunohistochemical analysis was performed to study CIT protein expression in 54 non-carcinomatous human bladder tissue samples and 315 human urothelial carcinoma tissues from Zhejiang Provincial People's Hospital. Our study was approved by the Human Research Ethics Committee of Zhejiang Provincial People's Hospital. Immunohistochemical (IHC) analysis was described in our previous study [14]. In brief, slides were baked at 60℃ for 2 hours followed by deparaffinization with xylene and rehydrated. The sections were submerged in EDTA antigenic retrieval buffer and microwaved for antigen retrieval, after which they were treated with 3% hydrogen peroxide in methanol to quench endogenous peroxidase activity, followed by incubation with 1% bovine serum albumin to block nonspecific binding [14]. The sections were then incubated with rabbit polyclonal anti-CIT (1:200; Abcam, Cambridge, MA, USA) at 4℃ for 16 hours. Secondary antibody was applied with the use of Envision (Rabbit, Dako, Denmark). Normal goat serum was used as negative control. After washing, tissue sections were treated with secondary antibody. Tissue sections were then counterstained with hematoxylin, dehydrated, and mounted. The degree of immune staining was reviewed and scored independently by 2 pathologists based on the intensity of staining who were unaware of the clinical and pathologic data. In cases of discrepancy, a consensus score was chosen for evaluation. An immunoreactive score (IRS) was calculated as described before [14]. Staining intensity was graded according to the following criteria: 0 (no staining), 1 (weak staining=light yellow), 2 (moderate staining= yellowish brown), and 3 (strong staining=brown). Moderate and strong staining were used to define tumors with high CIT expressions, and no and weak staining were used to indicate low CIT expressions. Staining percentage was graded according to the proportion of positively staining tumor cells as follows: 0 for <5% positive tumor cells; 1 for 6% to 25% positive tumor cells; 2 for 26% to 50% positive tumor cells; and 3 for >51% positive tumor cells. We use this method of assessment to evaluate CIT expression in human non-tumor mucosa and malignant lesions by determining the staining index with scores of 0, 1, 2, or 3 [14]. 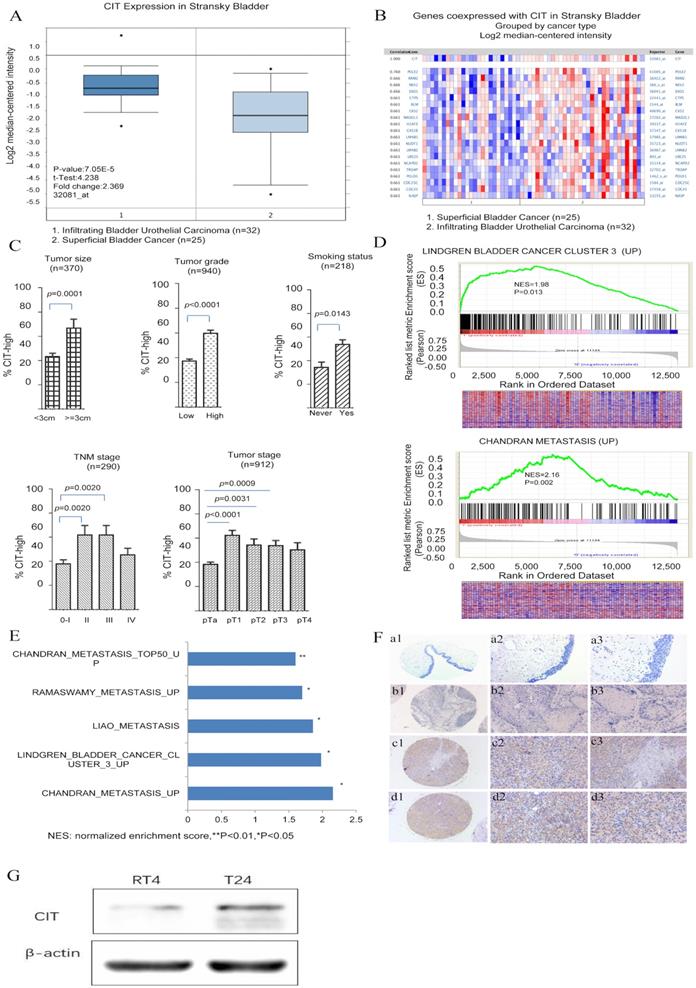 A further GSEA analysis indicated that gene signatures related to metastasis were enriched in CIT- high bladder cancer in the GSE31684 data set (Figure 1D and 1E). The normalized enrichment score (NES) were 1.98 and 2.16, respectively (P < 0.05). The correlation between CIT and aggressive phenotypes of bladder cancer were further validated. We also measured CIT expression in bladder cancer cell lines according to different invasiveness. As shown in Figure 1G, significantly increased CIT level was observed in T24 (Grade III) compared with RT4 (Grade I). 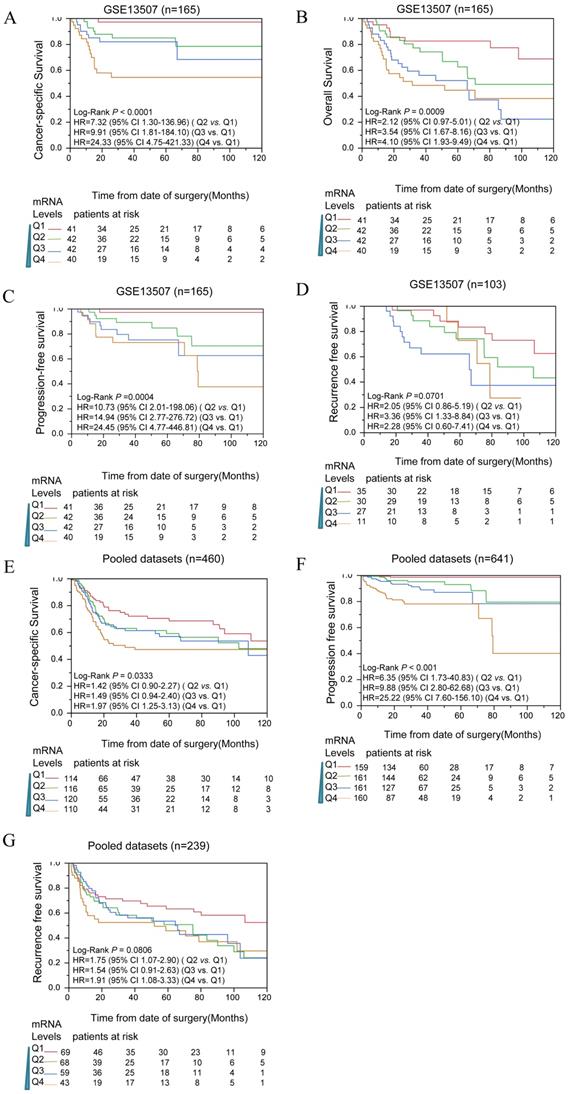 To our knowledge, this is the first systemic research to analyze the correlation between CIT expression and prognosis in bladder cancers. In this study, we provided that higher mRNA and protein levels of CIT were significantly associated with aggressive phenotypes of bladder cancers and poorer prognosis. These findings indicate that CIT might be a driver gene in bladder cancers.

CIT kinase was originally identified as a binding partner of active forms of the small GTPases Rho and Rac [3]. Subsequently, it was reported that CIT promote the constriction of the actomyosin contractile ring that drives cleavage furrow ingression during cytokinesis by phosphorylating the myosin regulatory light chain [1,15]. Nevertheless, further studies revealed that CIT also played a role in later stages of cytokinesis after completion of furrow ingression [16-22]. In the absence of CIT, the highly ordered arrangement of midbody proteins and the connection between the cortex and the central spindle microtubules are lost, which in turn leads to abscission failure [22]. Mutation or loss of CIT had been proved to lead to defective neurogenesis in both mice humans [6,7,23-25]. CIT loss can also cause chromosomal instability owing to its involvement in DNA damage control and involvement in cytokinesis [26]. Chromosomal instability was a hallmark of many cancers that was associated with cancer evolution, diversification and heterogeneity, drug resistance and metastases [27-29]. In addition, several studies had revealed that CIT depletion led to failure of cytokinesis and dramatically inhibited cell proliferation of liver, breast, cervical and colorectal cancer cell lines [30,31]. This proliferation inhibition directly resulted from an increase in apoptosis via both p53- dependent and -independent pathways [31]. Furthermore, dividing and polyploid cancer cells are more susceptible to CIT-K depletion [22,27]. Therefore, CIT might be a promising therapeutic target for cancer treatment.

Despite valuable findings above, some limitations should be noted. First, we only showed the phenomenological impact of CIT on the prognosis of bladder cancers. The biological mechanisms between CIT and bladder cancer cells are warranted to be investigated in further studies. Second, we couldn't obtain direct information on socioeconomic factors, such as quality of medical care, socio-economic class, patients' education levels and compliance, which might significantly affect patient survival and outcome.

In conclusion, these findings indicated that overexpression of CIT was significantly related to the poor survival outcome in bladder cancers. CIT could be a promising prognostic biomarker and therapeutic target for bladder cancers.

The authors would like to thank the members of the research group for useful discussions.

JFS and QZ designed the study, conceived the study and analyzed the results. CY and DHZ conceived an initial part of the study, performed the experiment and helped in compiling the results. JFS and QZ wrote the paper and made substantial contribution in interpretation of data and revising the manuscript for intellectual content. All authors read and approved the final manuscript.

Ethics approval for the study and a waiver of written informed consent, as applicable to the retrospective in-house research, were granted by the Zhejiang Provincial People's Hospital ethics committee. Patient confidentiality was maintained by anonymizing patient data to remove any identifying information.