Background and Aims: The prognosis of intrahepatic cholangiocarcinoma (ICC) after radical resection is far from satisfactory, but the effect of postoperative transarterial chemoembolization (p-TACE) remains controversial. This multi-center retrospective study was to evaluate the clinical value of p-TACE and identify the selected patients who would benefit from p-TACE.

Methods: Data of ICC patients who underwent radical resection with/without p-TACE therapy was obtained from 12 hepatobiliary centers in China between Jan 2014 and Jan 2017. Overall survival (OS) was set as the primary endpoint, which was analyzed by the Kaplan-Meier method before and after propensity score matching (PSM). Subgroup analysis was conducted based on the established staging system and survival risk stratification.

Results: A total of 335 patients were enrolled in this study, including 39 patients in the p-TACE group and 296 patients in the non-TACE group. Median OS in the p-TACE group was longer than that in the non-TACE group (63.0 months vs. 18.0 months, P=0.041), which was confirmed after 1:1 PSM (P=0.009). According to the 8th TNM staging system, patients with stage II and stage III stage would be benefited from p-TACE (P=0.021). Subgroup analysis stratified by risk factors showed that p-TACE could only benefit patients with risk factors <2 (P=0.027).

Conclusion: Patients with ICC should be recommended to receive p-TACE following radical resection, especially for those with stage II, stage III or risk factors <2. However, the conclusion deserved further validation.

The incidence of intrahepatic cholangiocarcinoma (ICC) is increasing stably worldwide, which accounts for 10%-15% of primary liver cancers [1, 2]. The prognosis remains poor, partly because approximately half of the ICC patients have lost the chances of surgery at diagnosis [3, 4]. Currently, radical resection remains the most efficient strategy for ICC [5-8], but the 5-year overall survival (OS) after radical resection is 20%-35%[9, 10]. Hence, postoperative adjuvant treatments are badly warranted to improve the prognosis of ICC.

Transarterial chemoembolization (TACE) has been confirmed to be efficient in the improvement of prognosis of advanced and inoperable patients [11-13], but whether postoperative TACE (p-TACE) could benefit patients following radical resection remains controversial. The clinical value of p-TACE for ICC has been evaluated in previously few studies [14-19], but it has yet reached a conclusion. However, randomized clinical trials (RCT) on this issue are rarely conducted mainly owing to the rare incidence of ICC. Hence, we collected the data from a multi-center retrospective study to evaluate the prognosis value of p-TACE for patients with ICC receiving radical resection.

This study was conducted to the ethical guideline of the 1975 Declaration of Helsinki and was approved by all the participating centers including Mengchao hepatobiliary hospital, Eastern hepatobiliary surgery hospital, Affiliated Cancer Hospital of Chinese Academy of Medical Sciences, Tongji Hospital, Beijing Friendship Hospital, Xuanwu Hospital, Tiantan Hospital, the affiliated Hospital of Chuanbei Medical University, Renji Hospital, the West China Hospital, the Southwest Hospital, and the Second Hospital of Zhejiang University. Informed consent was signed by all patients or their direct relatives before surgery. Data between Jan 2014 and Jan 2017 in the 12 centers were collected via electric case report form (CRF), including baseline characteristics, operation parameters, and tumor characteristics.

Patients were enrolled in this study if they 1) had a histopathologically confirmed diagnosis of ICC, 2) underwent radical resection with or without LND, 3) had no history of other malignancies, 4) had not received any preoperative anticancer therapy. Patients who had 1) incomplete clinical data, 2) preoperative obstructive jaundice, 3) extrahepatic metastasis, 4) mortality within one month after surgery, and 6) received other postoperative adjuvant therapies, such as radiotherapy, chemoradiotherapy, and immunotherapies were excluded from this study.

A preoperative diagnosis of ICC was primarily based on radiological findings, with or without elevated CEA and CA19-9[2, 6], and liver biopsy was needed when the imaging features were not typical. The indications of surgical resection for ICC were as follows: 1) patients with performance status 0~1 before surgery; 2) tumors with or without lymph node metastasis which were evaluated to be technically resectable; 3) Child-Pugh class A to B7; 4) the estimated volume of future liver remnant was >30% in normal livers and 50% in cirrhotic livers; 5) patients without evidence of extrahepatic metastasis.

Radical resection was defined as a negative margin and without recurrence within two months after resection. All the hepatectomy and LND were conducted by highly experienced surgeons, although the procedures were a little different from each center in detail.

p-TACE was conducted only once within one to two months following resection according to the discussion of multiple discipline team. Briefly, chemotherapeutic agents including 5-fluorouracil (500 mg), epirubicin (20 mg) and hydroxycamptothecin (10 mg) were injected into the predetermined hepatic artery using a 5-F catheter, and then an emulsion of lipiodol (5-10 mL) was inserted to embolize. Of note, patients who had: 1) an Eastern Cooperative Oncology Group (ECOG) score 0-1, 2) Child-Pugh grade A or B, 3) normal kidney function, 4) white blood cell count ≥3.0 × 109/L and platelet count ≥50 × 109/L were eligible to receive p-TACE.

Follow-up and definition of endpoints

All patients were periodically followed up once every 2-3 months in the first 2 years and then once every 6 months. Routine follow-up items included liver function tests, serum levels of CA19-9, CEA and AFP, and abdominal ultrasound, and a contrast-enhanced CT or MRI was warranted once recurrence was clinically suspected. Recurrence or metastasis was defined as new lesions with radiologic characteristics of ICC, and further treatment was immediately adopted whenever recurrence was confirmed. The follow-up investigation was carried out until October 2018.

Propensity score matching (PSM) was adopted to minify the selection bias [20], and the propensity score was determined using the potential confounding factors. Patients were then matched by a one-to-one ratio using the nearest neighbor method with a caliber of 0.2.

All the continuous variables were re-defined as categorical variables, hence all the variables were compared with the chi-square test or Fisher's exact test. Survival curves including OS and RFS were depicted using the Kaplan-Meier method and compared using the log-rank test. Risk factors associated with prognosis of ICC were determined by the forward method of the multivariate Cox regression model before and after PSM. Subgroup analysis was conducted based on the 8th TNM staging system and risk factors.

Initially, 437 patients with ICC underwent radical resection, but 14 patients (3.2%) were excluded for preoperative obstructive jaundice. After surgery, 13 patients (3.0%) had died within one month, and 53 (12.1%) patients received other postoperative adjuvant therapies. During the period of follow-up (1-73 months), 22 patients lost to follow-up. Finally, 335 patients were enrolled in this study, and 39 patients (11.6%) received p-TACE within two months after surgery. Detailed were depicted in Fig 1.

The baseline characteristics of the 335 patients were shown in Table 1. The median size of the resected tumor was 6.1cm, and 226 patients (67.5%) had a single tumor. 76 patients (22.7%) underwent LND, and LNM was confirmed by postoperative pathology in 41 patients (54.0%). Before PSM, patients with age <60 years, ECOG score <2, and surgical margin <1cm were more likely to receive p-TACE (all P<0.05, Table 1), but the clinicopathological characteristics were comparable between the two groups after 1:1 PSM (all P>0.05, Table 1). 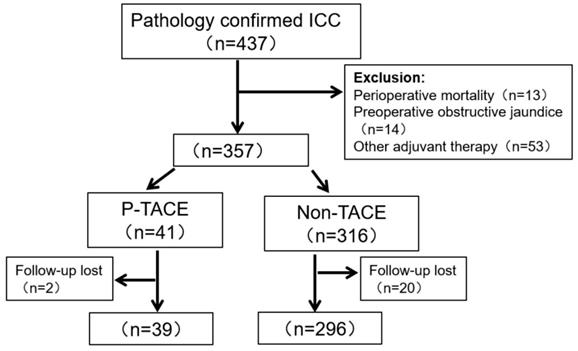 Risk factors associated with overall survival before and after PSM

Effect of p-TACE based on the 8th TNM staging system

Baseline Characteristics before and after PSM 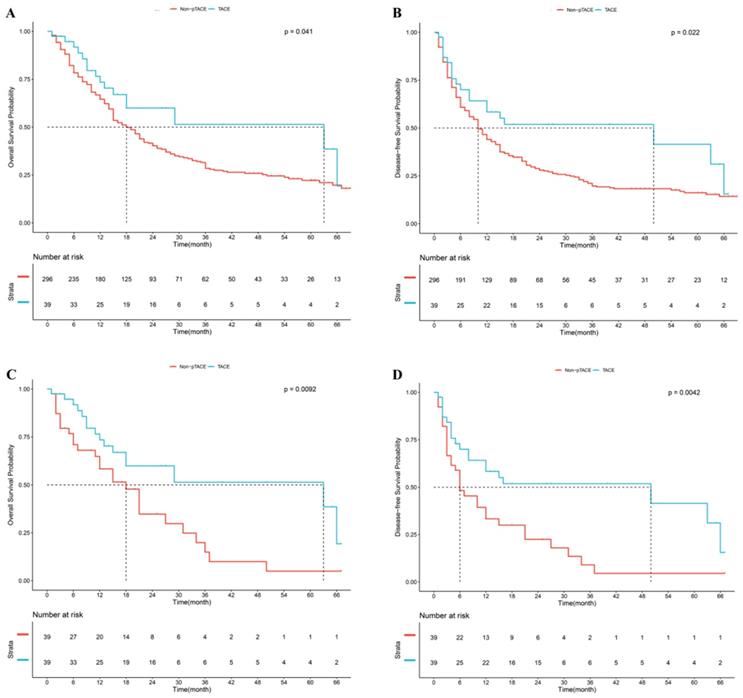 Effect of p-TACE based on risk factors

The prognosis of ICC after radical resection remains poor [5, 7, 21], and strategies intended to reduce early recurrence and improve the long-term prognosis are still badly warranted. p-TACE has been tried with the aim of anti-recurrence, but its efficacy remains controversial[14-19]. In this study, 39 of 335 patients (11.6%) received p-TACE following radical resection, which was lower than that in the previous reports [16, 18]. Results showed that patients in the p-TACE group enjoyed longer median OS and RFS than those in the non-TACE group before and after PSM (all P<0.05). Hence, TACE should be conducted after radical resection for ICC.

Radical resection is still the first-line treatment for patients with ICC [5-7], although half of the patients have lost the chances of resection at diagnosis [3, 4]. However, the median OS of ICC after radical resection has been reported to be 21.0-39.0 months [10, 22, 23], which is far from satisfactory. Reasons might be as follows: 1) aggressive characteristics of ICC [24], 2) high incidence of LNM but low incidence of LND [25, 26], and 3) high rate of early recurrence [27, 28]. In this study, the incidences of LND and LNM were 22.7%, and 54.0%, respectively, and the rate of recurrence within two years after radical resection was 61.5%. Hence, more strategies should be considered to improve the prognosis of ICC.

TACE is often considered as one of the important postoperative adjuvant therapies for primary liver cancers [29, 30], and has been conducted prevalently worldwide [31, 32]. Currently, few studies reported the clinical value of p-TACE for ICC [14-19], but conclusion has yet to be reached. In this study, the benefit of p-TACE group was observed in the whole cohort (P<0.05), and it was confirmed after 1:1 PSM (P<0.05), which indicated that our results were very convincing.

Nevertheless, there were several restrictions in this study. First, it was a retrospective study, and recalling bias was inevitable. Second, confounding factors related to the efficacy of p-TACE were almost inevitable, although a well-designed PSM was carried out. Thirdly, the incidence of patients receiving p-TACE was low (39/335, 11.6%), which was not optimal to reach a robust conclusion. The last but not the least, patients receiving p-TACE were typical present with aggressive characteristics and/or not sensitive to chemotherapy.

In summary, p-TACE would benefit patients with ICC receiving radical resection, especially for those with stage II, stage III or risk factors <2. However, the conclusion requires further validation.

Thank for the subsidy of Fujian provincial medical center of hepatobiliary.