Background: Previous prospective studies have shown that eribulin improves the survival in patients with metastatic breast cancer (MBC). However, the optimal timing of its administration to achieve the longest extended survival and the efficacy of using eribulin monotherapy as earlier-line chemotherapy are yet unclear.

Methods: We identified all consecutive female patients with MBC who received any chemotherapeutic intervention for metastatic disease at our institution between July 2012 and December 2017, excluding patients with HER2-positive disease. Those who received eribulin monotherapy for MBC were classified under the eribulin cohort, whereas those who never received eribulin were included in the non-eribulin (Non-E) cohort. Among the patients in the eribulin cohort, those who received eribulin as the first- or second-line chemotherapy for MBC were further classified under the earlier-line eribulin (EE), and otherwise classified under the later-line eribulin (LE) cohorts. The survival of patients was assessed using the log-rank test. A multivariable Cox proportional hazards model was used to assess the independent efficacy and timing of eribulin monotherapy. The inverse probability of treatment weighting (IPTW) estimate was utilized to compare the EE and LE cohorts.

Results: Of the 507 patients who were initially screened, 226 were included after an intensive chart review: 93, 49, and 84 patients were included in the Non-E, EE, and LE cohorts, respectively. The eribulin cohort showed significantly longer overall survival than the Non-E cohort (30.3 vs. 22.2 months, p = 0.0217). No significant difference was observed in the progression-free survival of the EE and LE cohorts (3.4 vs. 4.4 months, p = 0.1337) after adjusting for clinically relevant factors using IPTW estimates. LE cohort showed good overall survival (OS) compared with patient group of Non-E and EE by log-rank testing (p = 0.0398), although multivariate analysis did not demonstrate eribulin administration timing as an independent prognostic factor of OS. OS was defined from the initiation of first-line chemotherapy date.

Eribulin is a non-taxane inhibitor of microtubule dynamics belonging to the halichondrin class of anti-neoplastic agents (3). In addition to its primary anti-neoplastic function, preclinical studies have suggested other potential benefits of these drugs, such as preventing epithelial-mesenchymal transition (EMT) to inhibit cancer stem cell traits and improving the tumor microenvironment by vascular remodeling to reduce drug resistance and metastasis (4-6). The Study 305/EMBRACE has revealed that eribulin as third- or later-line chemotherapy for MBC improved OS compared with the treatment selected by physicians (7). Accordingly, eribulin has been usually administered as third- or later-line chemotherapy for MBC in clinical practice.

In this single institution retrospective chart review study, we identified all consecutive female patients with MBC (i.e., unresectable local disease and/or distant metastatic disease) who received any chemotherapeutic treatment for metastatic disease and/or unresectable locally advanced disease at the National Cancer Center Hospital East between July 2012 and December 2017 by reviewing the prescription record for eribulin and other chemotherapeutic regimens electronically and by reviewing the departmental database regarding MBC. Metastatic disease or locally advanced disease was confirmed through diagnostic radiography with computed tomography and/or whole body bone scintigraphy. Data were obtained on January 1, 2018, which is the reference date. Patients without MBC and those who never received cytotoxic chemotherapy for breast cancer were excluded. Moreover, those with HER2-postive disease were excluded, considering the evidence regarding the insignificant benefits of eribulin on the survival of patients in this subgroup (2, 10). Because the analyses regarding survival were the main endpoints in the current study, patients whose first-line chemotherapy initiation dates were unavailable and those who received eribulin but whose eribulin monotherapy initiation dates were unavailable were excluded for further analyses. Of the 507 breast cancer patients, we excluded 180 patients who were not treated with cytotoxic chemotherapy, 45 patients whose metastatic disease revealed to be non-metastatic disease, and 37 patients with HER2 positive disease. Additionally, 16 patients whose medical record was not sufficient and 3 patients treated with combination chemotherapy with eriburin (Figure 1, and supplement). This study was conducted in accordance with the declaration of Helsinki and was approved by the institutional review board of the National Cancer Center (protocol number: 2017-431).

The primary endpoint of this study was OS. OS1 was defined from the initiation of first-line chemotherapy date until any cause of death or censored on the last visit date, and OS2 was defined from the time of initiation of eribulin. And progression-free survival (PFS) was defined from the first administration date of eribulin monotherapy until disease progression or death, and these were estimated using the Kaplan-Meier method. Patients were followed-up until death; those who were alive on the reference date and lost to follow-up were censored during the last available follow-up date. The survival curves of the two groups were compared using the log-rank test. A multivariable Cox proportional hazards model was used to assess the independent efficacy and timing of eribulin monotherapy, thereby adjusting for the following pre-planned fixed characteristics: age during first-line chemotherapy initiation, hormone receptor status, primary metastatic or recurrent disease, and the presence of visceral disease during first-line chemotherapy initiation for MBC. To compare clinical outcomes between the EE and the LE cohorts, we utilized the inverse probability of treatment weighting (IPTW) estimate in which the weights were calculated as the inverse of the propensity score, thereby adjusting for the clinical characteristics that were used for the multivariate analyses. All statistical analyses were conducted using the SAS software version 9.4 (SAS Institute, Cary, NC, USA).

We included 226 patients after initially screening 507 patients excluding breast cancer patients untreated with chemotherapy (n=180), primary breast disease (n=45), HER2 positive disease (n=37), and 19 patients with insufficient data and those who received eribulin as combined chemotherapies were excluded (Figure 1). In total, 133 patients were classified under the eribulin cohort and 93 under the No-E cohort. Among the patients in the eribulin cohort, 49 (33.9%) and 84 (66.1%) were further classified under the EE and LE cohorts, respectively. The characteristics of the participants during chemotherapy initiation for MBC are depicted in Table 1.

Flow diagram of screening patients in this study. After screening 507 patients, 226 were included for further analyses. 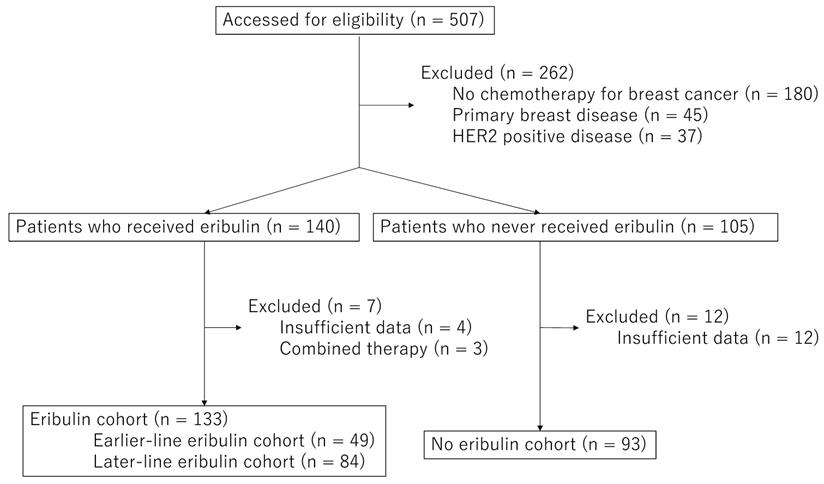 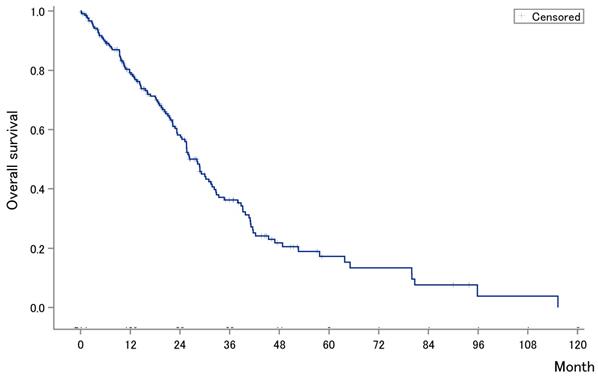 Patient characteristics at the initiationof chemotherapy 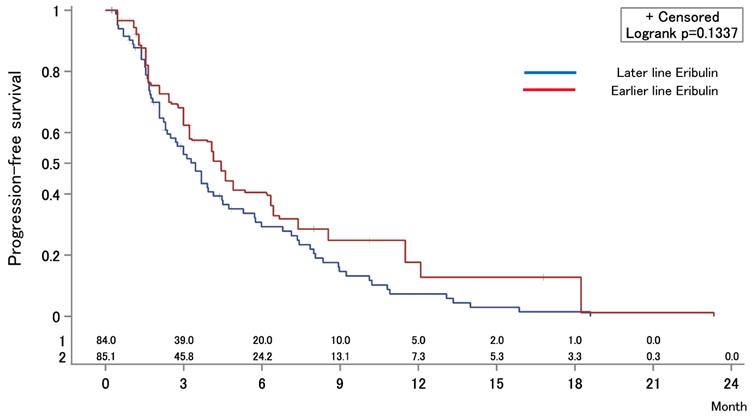 We showed that the eribulin cohort had a longer OS1 than the non-E cohort, which is consistent with the results of a phase III trial (7), and longer survival was achieved regardless of eribulin administration timing for HER2-negative disease. And, no significant difference was observed in the survival outcomes of the EE and LE cohorts after adjusting for prognostic factors using multivariate analysis and IPTW estimates. The median survival endpoints following eribulin monotherapy in the current cohort (PFS, 3.5 months; OS2, 10.7 months) were comparable to those of previous randomized phase III trials (PFS, 3.7 months; OS, 13.1 months) (7). In contrast, the optimal timing of eribulin monotherapy is yet unclear. Notably, heavily pretreated patients in the LE cohort conspicuously achieved comparable PFS to that of the EE cohort, considering the general principle in cancer therapy: cancer gets more refractory when it has received more treatment. This finding is consistent with the report showing that prior chemotherapies were not associated with the efficacy of eribulin (11). In addition, the survival benefit of eribulin monotherapy has been reported only in patients who received prior chemotherapy at least once in prospective studies (12). Collectively, eribulin should be selected as second- or later-line chemotherapy in daily clinical practice.

In contrast, there is accumulating evidence regarding the use of eribulin as earlier-line chemotherapy. A clinical study has indicated that patients with TNBC who received eribulin as earlier-line chemotherapy had longer PFS (12); this result is consistent with preclinical findings showing that epithelial-mesenchymal transition, an aggressive mechanism in TNBC, is alleviated by eribulin (4). Although our current study included only 24 patients with TNBC and did not produce enough statistical power, our approach must be used when comparing the EE and LE cohorts after adjusting for prognostic factors using multivariate analysis and IPTW estimates in a larger cohort of patients with TNBC.

The limitations of the current study include its retrospective nature in data collection, which may result in the potential deviation of the disease characteristics in the cohorts. First, patients in the LE cohort were more likely to have indolent disease such that they survive for a sufficiently long duration to receive more than two lines of chemotherapies, whereas patients in the EE cohort were more likely to have aggressive disease such that they were unable to receive more than two lines of chemotherapies. And we could not fully include whether patient had anthracycline and/or taxane if they had primary breast cancer before. These could present a bias toward the EE cohort. To minimize the potential bias, we have performed survival analyses by comparing the two groups after adjusting for the prognostic factors using the IPTW estimation. Another limitation may be the small sample size, resulting in insufficient statistical power for detecting clinical significance.

We thank Ms. Ryoko Wanikawa for her excellent works in data collection.

SS, TK, and MS designed the study and performed data analysis and interpretation. All authors wrote, reviewed, and approved the manuscript.

This work was supported by JSPS KAKENHI Grant Number JP17K10570