Objective: To investigate the risk of colorectal cancer and its relationship with colonic flora and microenvironment under high-fat and high-calorie diet. Methods: Wistar rats were used to study, and they were given normal diet, high-fat diet, and dimethyl hydrazine (DMH) to induce the occurrence of colorectal cancer. Then observe the difference in tumor formation and the relationship among microbial community, inflammatory factors and metabolism. Results: No tumors were found in the normal diet group (G1) and the high-fat diet group (G3). Four nodules were found in the four rats in the normal diet + DMH group (G2) and 8 cancerous nodules were formed in 7 rats (70%) from high-fat diet + DMH group (G4). Cholesterol and TNF-α increased, IL-1, IL-6 and LEP decreased in the high-fat diet group. The difference was statistically significant. In the cancer-inducing group, only the difference in cholesterol was statistically significant. Compared with the normal diet group (G1) and the high-fat diet group (G3), the rat's gut bacterial abundance was not significantly different, but the gut flora structure was significantly changed. The content of Candida in the intestinal tract of rats in the high-fat diet group was reduced (P = 0.015), while the content of Verrucomicrobia increased (P = 0.035); In the comparison of genus content, Ruminococcus, Candida, Saccharibacteria genera incertae sedis, Enterobacter, Clostridium IV, Enterococcus, Enterorhabdus, Acetivibrio, Adlercreutzia, Lactococcus, etc., decreased significantly, while Akkermansia, Warthococcus, Staphylococcus, Butyricimonas, Clostridium XVIII, etc. increased significantly.

Conclusion: This study found that high-fat, high-calorie diet can increase the susceptibility of the intestine to carcinogenic factors. The reason may be that the high-fat diet causes the body to appear inflammatory states and microbial community imbalance, especially rumenococcus, candida, Saccharomyces, Enterobacter, Clostridium IV, Enterococcus, Enterobacter, Vibrioaceticus and other genus reduction are important links. Exploring ways to improve these floras is an important factor to improve the resistance of the intestinal tract to cancer-inducing agents.

1. Feeding and grouping of experimental animals

The blood was removed by eyeballs, and the plasma was separated by centrifugation, and the blood glucose and blood lipid metabolism indicators (total cholesterol, triolein, HDL, LDL) were detected. Inflammatory factors (IL-1, IL-6, COX-2) and cytokines (TNF-α, LEP) were detected by enzyme-linked immunosorbent assay.

Before putting the animals to death, take 0.1 ~ 0.3g of fresh feces by massaging the abdomen, and immediately put them into liquid nitrogen and then store them in -80 ℃ refrigerator.

The rats were dissected, and the large intestine was cut freely and fully. The ascending colon, transverse colon, descending colon, and rectal intestinal mucosa were separated and stored in a -80 ° C refrigerator. The number and size of colon tumor in the rats were calculated and measured. Tumors or suspected tumors were completely removed and divided equally 2 parts, one part is stored in 10% formaldehyde and the other part is quickly frozen and transferred to -80 ℃ refrigerator for storage. The intestine is cut open longitudinally, flattened between two layers of filter paper and fixed at 10 % Neutral buffered formalin solution. Tumor size was measured and HE stained for pathological analysis.

Frozen fresh rat feces samples were quickly weighed and 0.1g samples were taken and centrifuged to extract DNA samples after rewarming.1ul MD microplate reader (MD company in the United States) was used to quantitatively detect the quality of DNA samples. After extraction, the DNA samples were expanded by 16sPCR (primer: 16s) -341F: CCTACGGGNGGCWGCAG; 16s- 341F: CCTACGGGNGGCWGCAG), the samples were sequenced according to the Illumina Miseq high-throughput sequencer usage guide. After running for 3-5 days, the original data was converted to Fastq format, and the data quality reached more than Q30 80%. In microbial diversity research, alpha diversity was measured by species richness (Richness, Chao, ACE) and diversity index (Shannon, Simpson); beta diversity analysis compares the similarity of species composition of samples, including cluster Class analysis and ranking analysis. The species abundance ratio chart counted each sample according to the boundaries, phylum, class, order, family, genus, and species level of the taxonomic unit of the species. Kruskal / wilcoxon rank sum test, similarity analysis (Anosim), Permanova substitution variance test, etc. were used to analyze the abundance and difference between species.

Tumor formation characteristics of rats in each group

Rats gradually gained weight, but there was no significant difference between the 4 groups.There was no tumor formation in the normal diet group (G1) and high-fat diet group (G3). Four rats (40%) in the normal diet + DMH group (G2) formed 4 nodules, and the tumor weight was 0.06 ± 0.05g. Seven rats (70%) from fatty diet + DMH group (G4) formed 8 cancerous nodules with a tumor weight of 0.05 ± 0.03g. Compared with the normal diet cancer-inducing group, the high-fat diet cancer-inducing group had increased intestinal tumor formation (70% VS 40%) (Figure 1).

Effects of high-fat diet on metabolism and inflammatory factors 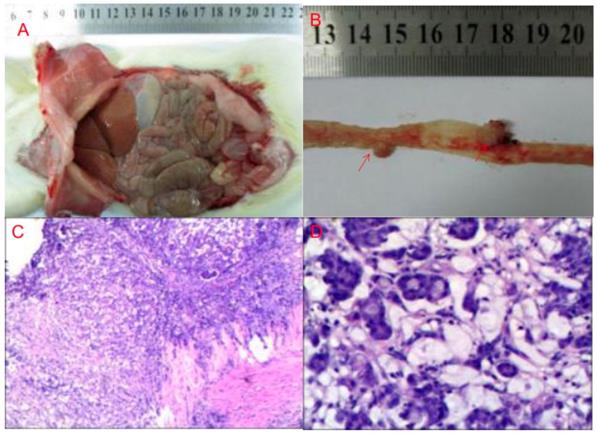 Compared with G4 group, G2 group had no significant difference in gut bacterial abundance, but the intestinal flora structure changed significantly (ANOSIM R = 0.292, P = 0.001; PERMANOVA F = 3.697, P = 0.001). In the comparison of bacteria categories, the contents of Actinobacteria and Candida in the G4 group were significantly lower than those in the G2 group (Figure 4). 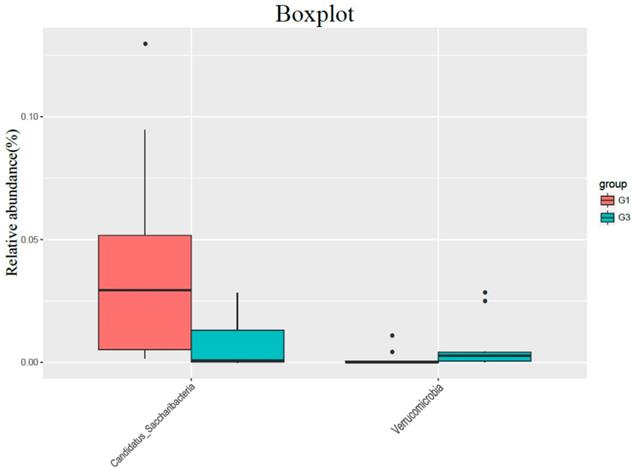 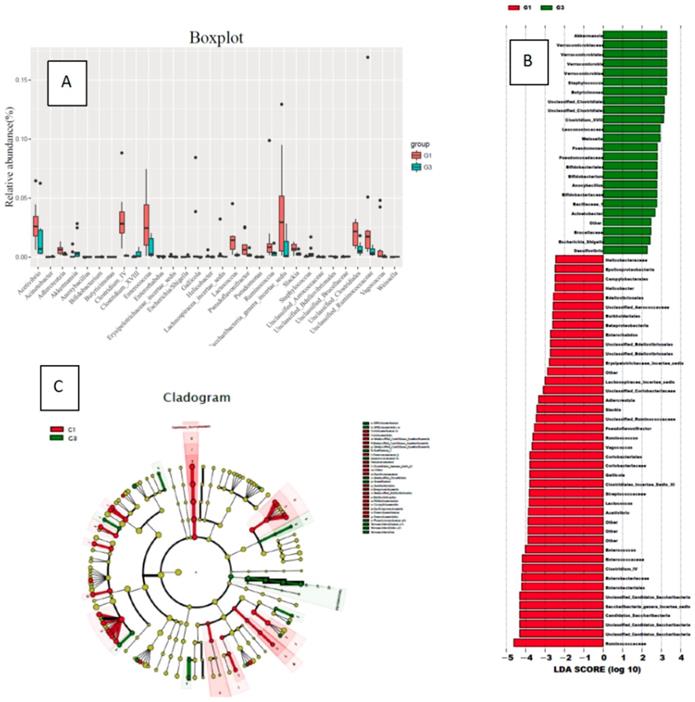 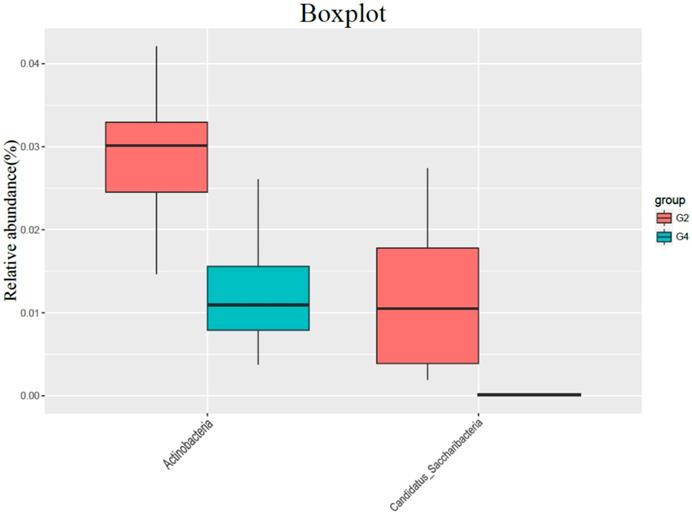 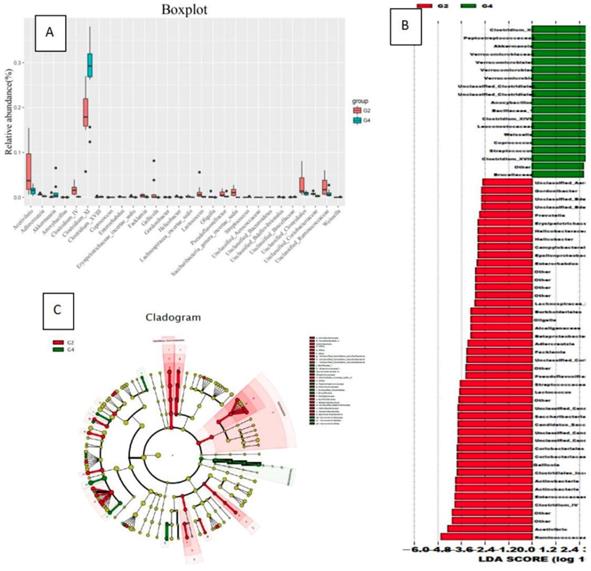 Modern research has shown that chronic inflammatory station leading to imbalance of the coliform flora may be an important cause of susceptibility to colorectal cancer [17-18]. In this group of studies, although the bacterial abundance of animals in the high-fat diet group did not change significantly, the types and distribution of bacteria changed significantly. In the comparison of gut microbiome, the content of candida in the intestine of rats in the high-fat diet group was significantly reduced compared with the normal diet group, while the content of Verrucomicrobia was significantly increased compared with the normal diet group. Verrucomicrobia is a kind of bacteria enriched in the intestinal mucosa, which will decrease in high-fat diets, obesity and other diseases. This study is similar to reports in the literature [19].

At the species level, rumenococcus, candida, saccharin, enterobacteria, clostridium IV, enterococcus, enterobacteria, vibrioaceticus, etc. were reduced in animals of the high-fat and high-calorie diet group. Most of these bacteria are already reported probiotics. The reduction of these bacteria may cause intestinal microenvironment disorders, and the intestinal mucosa barrier to resist external invasion will decrease, leading to increased susceptibility to carcinogenic factors [20-21]. After using DMH, the proportion of rumenococcus, Candida, Clostridium IV, and Enterobacter bacteria in the high-fat diet group decreased further, further indicating that the decrease in the proportion of these bacteria is an important cause of the increased intestinal susceptibility to carcinogens the reason.

In the high-fat and high-calorie diet group, bacterial genera such as Akkermansia, Warthococcus, and Staphylococcus increased. The increase in the proportion of these bacterial genera may be related to the decrease in the proportion of other bacterial genera. In this group of results, the content of Akkermansia increased in high-fat and high-calorie diets [22-23], and the literature reported that in high-fat and high-calorie diets and metabolic diseases, proportion of Akkermansia may decrease. The results were different from those reported in the literature. The reason was not clear. It may be related to the significant decrease in the proportion of other bacteria and lead to increase Akkermansia relatively in this group of studies. Further research will be conducted to conform our outcome. After the use of DMH to induce cancer, bacteria such as Clostridium XI, Streptococcus digesta, Ackermania, Clostridium XVIII increased, suggesting that these bacteria play a harmful role in the intestinal, which may be the reason of the intestinal tract to carcinogens.

Due to the complexity of the intestinal flora, a series of bacteria rise and fall after a high-fat, high-calorie diet but how these bacteria work and what role they play is currently unclear. From the perspective of clinically regulating the intestinal microecology, selective fecal transplantation can be used to supplement the decreased bacteria, but there is currently no better way to remove the increased bacteria [24].Therefore, it is significant to explore the decreased beneficial bacteria and find ways to improve these.

In summary, this study shows that high-fat and high-calorie diets can increase the susceptibility of the intestines to carcinogenic factors, which may be due to high-fat diets leading to inflammatory states and intestinal flora imbalances, especially rumenococcus, candida, Saccharomyces, Enterobacter, Clostridium IV, Enterococcus, Enterobacter, Vibrioaceticus and other genus reduction are important links. Exploring ways to improve these flora is an important factor to improve the resistance of the intestinal tract to cancer-inducing agents.