Purpose: To conduct a population-based study to determine whether the use of GnRH agonist and antiandrogens are associated with an increased risk of cardio-cerebrovascular disease (CCVD) in Asian patients with prostate cancer using the National Health Insurance Service-Elderly Cohort Database (NHIS-ECD).

Results: The 5-year AMI-free rates of patients diagnosed with prostate cancer and treated with GnRH agonists, antiandrogens alone, or androgen deprivation therapy (ADT)-naïve interventions were 97.0%, 96.5%, and 98.3%, respectively, while the 5-year IHD-free rates were 93.2%, 92.3%, and 94.5%, respectively. Exposure to GnRH agonists or antiandrogen regimens did not significantly increase the risk of AMI or IHD compared to ADT-naïve treatment in multivariate Cox proportional-hazards models after adjusting for other covariates. Five-year IS-free rates of patients exposed to GnRH agonists, antiandrogens alone, and those with ADT-naïve prostate cancer were 94.8%, 94.7%, and 95.5%, respectively, while the five-year CVD-free rates were 92.9%, 93.3%, and 94.6%, respectively. Cox proportional-hazards models also failed to show that men who received GnRH agonist or antiandrogen treatment alone carried a significantly increased risk for IS or CVD compared to ADT-naïve patients.

Conclusions: The current study based on Asian population suggests that treatment with neither GnRH agonist nor antiandrogens increases the risk of cardio-cerebrovascular disease compared to patients with ADT-naïve prostate cancer.

Androgen deprivation therapy (ADT) is routinely used to treat patients with advanced prostate cancer (PCa)[1]. It is well known that ADT causes side effects such as hot flushes, fatigue, decreased libido, and erectile dysfunction [2]. Recent multiple observational studies have shown that men treated with ADT are at an increased risk of developing cardio-cerebro-vascular disease (CCVD), including myocardial infarction (MI) and ischemic stroke (IS) [3-6]. These studies have led to issues and advisories regarding the relevance of ADT to CCVD [7]. The assumed biological mechanism underlying these observational studies is the link between ADT and the formation of atherosclerotic plaque. Recent animal studies suggest that ADT contributes to the development of atherosclerosis [8, 9]. ADT induces metabolic changes that promote the development and progression of atherosclerotic plaques under the effect of hormonal factors on plaque growth, rupture, and thrombosis [10].

However, these theories remain inconclusive. Further studies are needed to confirm the association between ADT and CCVD. In particular, physiological, genetic, and ethnic differences might contribute to metabolic changes associated with ADT. However, most studies investigating the association between ADT and CCVD involved the Western population. Only a few studies involved Asian populations, including a small number of patients in a single institution, which does not represent the whole population.

Therefore, this population-based study used the National Health Insurance Service-Elderly Cohort Database (NHIS-ECD). To determine whether the use of ADT was associated with an increased risk of CCVD in patients with PCa.

This study used claims data acquired from NHIS-ECD released by the Korean National Health Insurance Service (KNHIS). The KNHIS provides data sharing service to support policy and academic investigations using claims data collected under the national health insurance program. The cohort members of NHIS-ECD were selected by a simple random sampling method from patients aged 60 years or older who qualified for the health insurance program in 2012. These cohort members were followed up for 12 years until 2013 unless the individual was disqualified due to death or emigration. The NHIS-ECD contains information regarding 558,147 elderly patients, accounting for approximately 10% of the entire South Korean patients aged 60 years or older. The following variables were included in the NHIS-ECD data: socio-economic status (including death and disability), principal diagnosis or comorbidities based on the International Classification of Disease, 10th Revision (ICD-10), surgical procedures, and drug prescription (generic name, dosage, and prescription duration). Because patient data in NHIS-ECD were fully de-identified, the requirement for Institutional Review Board approval was waived.

Flow diagram for selection of the study cohort. 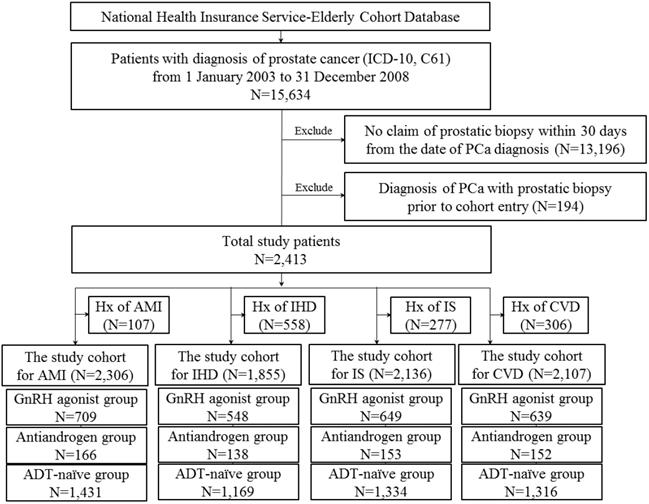 Male patients aged 60 years or older with a first diagnosis of PCa between January 2003 and December 2008, and prostatic biopsy within 30 days from the date of the first diagnosis were included in this study (Figure 1).

Baseline covariates were derived from medical claims during 12 months preceding the cohort entry. The variables included age, year of diagnosis of PCa, diabetes mellitus (ICD-10 code of E10-14), hypertension (ICD-10 code of I10, I11, I13, and I14), and Charlson comorbidity index (CCI). CCI was calculated from medical claims one year before PCa diagnosis using the method proposed by Quan et al [11].

Each patient was followed up from the cohort entry date until the diagnosis of the first CCVD event of interest, the start of another ADT, death, or the end of study period (31 December 2013). Analysis of variance (ANOVA) was used to compare means while Chi-square test was used to compare the proportions of study patients according to the different treatment regimens. We calculated the incidence rates of AMI, IHD, IS, and CVD during treatment with GnRH agonists, antiandrogens alone, or ADT-naïve interventions. Survival analyses were performed using Cox proportional-hazards regression. All covariates in Table 1 were adjusted to calculate the hazard ratios and their 95% confidence intervals. All analyses were performed using the SAS software version 9.4 (SAS Institute, Cary, NC, USA).

The overall patient characteristics in the prostate cancer study cohort are summarized in Table 1. Significant baseline differences were found in age, CCI, and BMI between ADT cohort and ADT-naïve cohort. Patients in the ADT cohort (GnRH agonist or antiandrogen only) were more likely to be older with a higher CCI. They also showed a distinct difference in age distribution. More than 20% of the ADT cohort were men aged above 80 years. Conversely, only 7.7% of men in the ADT-naïve cohort were aged above 80 years.

Overall patient characteristics of the cohorts

* Adjusted for all covariated in Table 1

Kaplan-Meier survival curves for patients with AMI (A) and IHD (B) according to prostate cancer treatment modality. 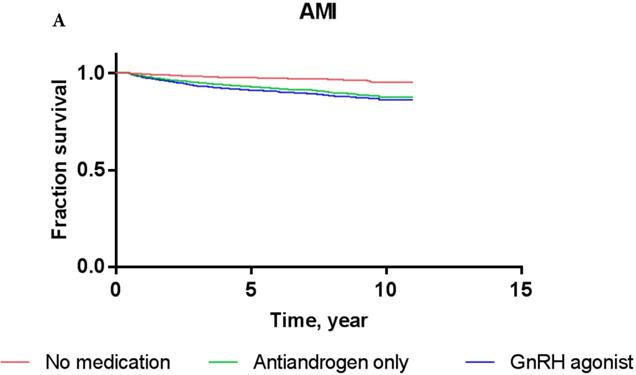 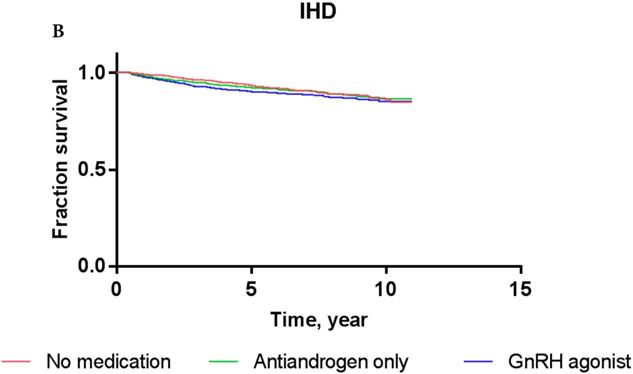 The key findings of this Asian population-based study are as follows. First, prostate cancer patients who received GnRH agonist or antiandrogens only did not show an increased risk of cardiovascular disease compared to ADT-naïve patients. Second, the use of GnRH agonist or antiandrogens was not a significant risk factor for developing cerebrovascular disease in Asian men with prostate cancer.

* Adjusted for all covariated in Table 1

Kaplan-Meier survival curves for patients with IS (A) and CVD (B) according to prostate cancer treatment modality. 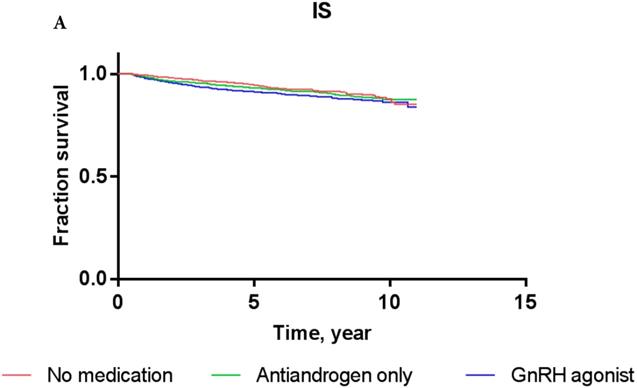 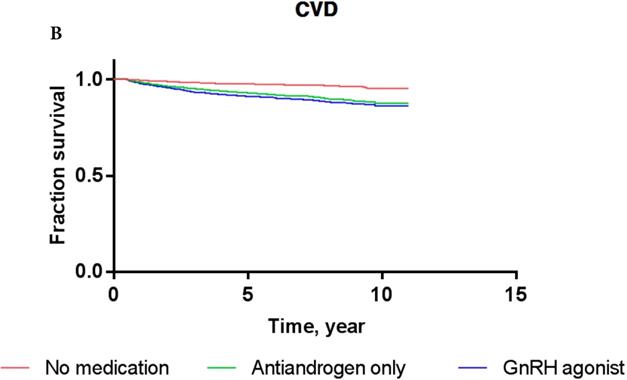 Despite ongoing review, the FDA drug safety communication has warned that ADT increases the risk of certain cardiovascular diseases, and physicians should monitor their development [12]. These recommendations are consistent with the Science Advisory issued by the American Heart Association, American Cancer Society, and American Urological Association. Recent meta-analyses using observational data of ADT and the risk of CCVD events in men with prostate cancer have also suggested that ADT might increase the risk of CCVD [13, 14]. The pathogenesis of ADT-induced CCVD may involve changes in body composition and metabolism. ADT has been shown to suppress testosterone production, which leads to decreased lean muscle mass but increased fat mass [15]. Another suggested mechanism is that the low level of testosterone induces insulin resistance and the adverse lipid profile, which increase vessel wall thickness and trigger atherosclerosis, resulting in endothelial dysfunction [16, 17].

However, the relationship between ADT and CCVD remains controversial. In addition, most studies investigating the effect of ADT on CCVD have been based on western populations including Caucasians. As mentioned above, the pathophysiological events underlying changes in body composition, especially fat mass, play a key role in the development of CCVD. Significant differences in body composition and fat mass have been found between western population and Asians. In general, the prevalence of obesity is significantly higher in western population than in Asian population [18]. In the United States, 33% of the population is obese. In the UK, 26.9% of the residents are obese. In Korea and Japan, the percentage of obese people is relatively very low [19]. A small amount of fat mass in the Asian population has an impact on the risk of CCVD following ADT.

Physiological and genetic differences according to ethnicity also affect the relationship between ADT and CCVD. Differences in androgen receptor (AR) CAG repeat length polymorphism [20-22] and deletion of UGT2B genes [23, 24] contribute to differences in the development of CCVD between Asians and Caucasians. These ethnic differences affect the development of CCVD following ADT. Therefore, further investigations are needed to determine the association between ADT and CCVD in Asian population.

Our results are in agreement with previous Asian population-based studies, including the Japanese population [25] and the Taiwanese population [26]. The Japanese population study showed no increased risk of coronary heart disease in patients exposed to ADT. The Taiwanese population study showed no increased risk of IS following ADT [27]. However, other Asian population studies suggested increased risks of CCVD in patients receiving ADT [28-30]. Although such discrepancies cannot be explained, studies reporting a positive association between ADT and CCVD involve relatively small numbers of subjects at a single institution. Therefore, they cannot accurately represent the population. The current study is a nationwide representative analysis of Korean population. This study analyzed data from NHIS-ECD, which sampled more than 55 million people aged 60 years or older through national health insurance service registration. The study represents approximately 10% of all South Korean patients aged 60 years or older. It therefore provides a highly representative cohort of the Korean population.

It is worth noting that this is the first population-based observational study to investigate the relationship between ADT and the risk of CCVD among Koreans, a population with homogeneous ethnicity. To the best of our knowledge, the sample size and observation period in this study are larger than those of previous studies involving Asian population. In addition, we carefully defined the potential confounders at baseline. Male patients with a history of any cardiovascular disease (except hypertension, ischemic, or hemorrhagic stroke) and renal failure were excluded from the analysis, which was thus more reliable by controlling potential confounders. In addition, those who were aged above 40 years in South Korea were advised to undergo health examination including electrocardiography and lipid profile. Any abnormal findings were covered by NHIS for further medical evaluation. Therefore, the analysis entailing frequent and widespread medical evaluation has considerable strength and power.

Our study has some limitations due to potential confounding factors associated with lifestyle. Smoking status and obesity are known risk factors for CCVD. However, they were not evaluated in the current study. Another limitation was that patients were not categorized by cancer status such as stage, metastasis, and Gleason score in the current study because cancer profile was unavailable in the current database. However, the extent or staging of prostate cancer might not modify CCVD risk. Lastly, the potential for disease misclassification based on claim database was another limitation. The Korean NHISS covers almost all medical costs of patients with major diseases such as malignancy, coronary heart disease, and stroke. Patients only need to pay 5% of the total medical cost. However, the registration and certification criteria for patients with major diseases are stringent, which ensures sufficient reliability and trustworthiness of medical claims.

The current study based on nation-wide population in Korea suggests that the use of ADT in prostate cancer patients does not increase the risk of CCVD compared to ADT-naïve patients. Although it is not sufficient to establish the association between ADT and CCVD, the Asian population differs from western population. Therefore, further well-designed studies including different regions and populations are needed to elucidate the increased risk of CCVD following ADT.

This work was supported by the National Research Foundation of Korea (NRF) grant funded by the Korea government (No. NRF- 2018R1D1A1B07049542).