Background: Chromosomal instability (CIN) and microsatellite instability (MSI) account for the major causes of colorectal cancer (CRC). As an important component of the CIN pathway, PIK3CA mutation is a negative prognostic factor in CRC. However, the relationship between PIK3CA mutation and mismatch repair (MMR) status has not been well clarified.

Conclusions: The molecular pathogenesis is different between dMMR and pMMR tumors with PIK3CA mutation in CRC. PIK3CA mutation may act as a clonally dominant truncal mutation in dMMR CRC. Thus, combination of PIK3CA mutation and MMR status might determine a specific group of CRC to select treatment or elevate prognosis.

Colorectal cancer (CRC) is one of the most common malignancies in the world [1], and ranks as the fifth cause of cancer-related death in China [2]. It is a heterogenous disease evolving from diverse genetic pathways, which attribute to tumor development and progression [3]. Therefore, uncovering the molecular alterations of CRC may be helpful to develop potential new approaches for the diagnosis and treatment.

Chromosomal instability (CIN) and microsatellite instability (MSI) are two crucial pathways in CRC pathogenesis [4]. MSI is a hypermutable phenotype at the genomic level that is caused by deficient DNA mismatch repair (dMMR) mainly because of germline mutations (Lynch syndrome) or hypermethylation of MMR genes [5]. MMR status can be determined by immunohistochemical assay (IHC). The dMMR tumors show loss of expression in MLH1, MSH2, MSH6 or PMS2 protein, whereas the pMMR tumors have intact expression of all four MMR proteins. Studies have found that dMMR CRC cases exert some distinct differences in clinicopathologic features compared with pMMR CRC cases, such as preference of proximal colon, mucinous or signet ring differentiation, and a favorable prognosis [6]. Moreover, advanced dMMR/MSI-H CRC patients may benefit from immunotherapy, such as anti-PD-1 therapies [7].

PIK3CA, which encodes the catalytic p110-alpha subunit of PI3K and thus regulates PIK3CA/AKT pathway downstream of EGFR, has been described to be mutated in 10%-20% of CRC patients. More than 80% of PIK3CA mutations occur in the helical and kinase domains [8]. Basic studies have reported that mutation in PIK3CA can accelerate tumor progression, usually alongside with KRAS/BRAF mutations [9, 10]. Clinical studies have shown that PIK3CA mutation may be a biomarker for resistant to anti-EGFR therapy of CRC [11]. Moreover, PIK3CA-mutant CRC patients may benefit from adjuvant aspirin therapy or PI3K inhibitor treatment [12, 13]. Therefore, PIK3CA mutation plays an important role in CRC treatment.

Recent study has reported that PIK3CA mutation is more commonly mutated in the MSI molecular subgroup of gastric cancer [14]. However, the relationship between PIK3CA mutation and MSI status in CRC patients remain elusive. In this retrospective study, we interrogated 424 pMMR and 104 dMMR CRC tumors by NGS to identify KRAS, NRAS, BRAF, PIK3CA and TP53 mutations. We further investigated the clinical and molecular differences of the PIK3CA-mutant tumors stratified by MMR status in Chinese CRC patients.

A total of 528 CRC patients who had undergone surgery at Cancer Hospital, Chinese Academy of Medical Sciences (CAMS) between 2013 and 2018 were enrolled. Among these 528 patients, 104 were dMMR CRC, whereas 424 were pMMR CRC. Clinicopathological characteristics were obtained from the medical records. None of the patients had received neoadjuvant therapy or radiotherapy before surgery. The study had been approved by the Institute Review Board of the Cancer Hospital, CAMS. Informed consents were obtained from all patients, and methods were carried out in accordance with the approved guidelines.

MLH1, PMS2, MSH2 and MSH6 expression was determined by IHC. Briefly, the tissue sections were deparaffinized in xylene, and then rehydrated in graded alcohol. After washing in distilled water, all tumor samples were stained in an autostainer (Autostainer Link 48, Dako, Denmark) with the antibodies of MLH1 (ES05, Dako) , MSH2 (FE11, Dako), MSH6 (EP49, Dako) and PMS2 (EP51, Dako), respectively.

The amplification-based NGS testing was performed to identify mutations in KRAS, NRAS, BRAF, PIK3CA and TP53. Briefly, multiplex PCR was performed with 10 ng of genomic DNA, and then adapters were ligated to each PCR product. The amplicon libraries were constructed after purifying with 75% ethanol. The quantity of amplicon libraries was determined using Ion Library Quantification Kit (Thermo Fisher, MA, USA). Each library was diluted to a concentration of 40 pM, and pooled in equal volumes. Template preparation was performed with Ion Chef, and sequencing was carried out on Ion S5 with 520 Chip. Finally, data were generated using the software of Torrent Suite. Variants with coverage depth> 500 and MAF >5% were identified as mutations using the Torrent Variant Caller.

DNA from PIK3CA-mutant tumors was further interrogated using a capture-based targeted sequencing panel (Burning Rock Biotech, Guangzhou, China) to parallelly profile somatic mutations of 33 cancer-related genes and MSI status. DNA from adjacent normal tissues was also tested to determine germline mutations. Briefly, fragment genomic DNA was obtained by sonication (M220 Focused- Ultrasonicator, Covaris, Woburn, Massachusetts, USA). PCR amplification was performed after the adaptors were added on both ends. After purification with 75% ethanol, the PCR products were hybridized with the capture probes, and enrichmented with beads. Moreover, PCR amplification was performed to get the libraries. All the indexed libraries were mixed with proper concentration, and were then sequenced on Nextseq N500 (Illumina, San Diego, CA). Sequence data were generated and analyzed by GATK 3.2. Variants with coverage depth> 500 and MAF >5% were identified as mutations.

Flow chart of the pMMR and dMMR CRC samples subjected to NGS testing. 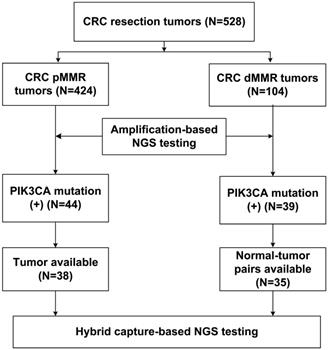 Patient characteristics in 528 CRC patients, including 424 pMMR and 104 dMMR patients.

Molecular and clinicopathological differences between pMMR and dMMR cases were investigated by Chi-square test or Fisher's exact test. The relationship between concurrent PIK3CA and RAS/BRAF MAFs was determined by paired Student's t-test. All analyses were performed with SPSS 18.0 Software. Statistically significance was identified when a two-sided P-value was less than 0.05.

With respect to the MMR status, a total of 528 CRC resection cases were classified into 424 pMMR cases and 104 dMMR cases. The clinicopathological characteristics were listed in Table 1, based on the MMR status. The results showed that dMMR cases were significantly associated with right colon location (65.4% vs. 20.8%) and reduced lymph node metastasis (23.1% vs. 73.6%) compared with pMMR cases. In addition, lymphovascular invasion (26.0% vs. 48.1%) and cancerous nodes (5.8% vs. 26.7%) were less frequently observed in dMMR cases than pMMR cases. The study population was subjected to NGS- based molecular testing, as summarized in Figure 1.

Clinicopathologic characteristics of pMMR and dMMR cases with PIK3CA mutation 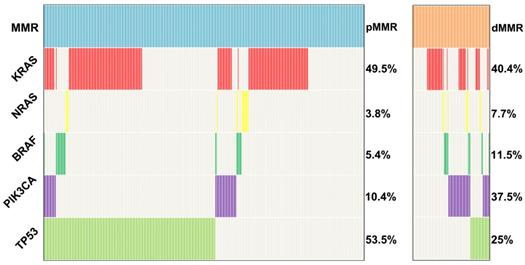 Clinicopathological features of CRC by PIK3CA mutation and MMR status.

Paired tumor-normal tissues from 35 PIK3CA-mutant dMMR patients were subjected to the hybrid capture-based NGS testing to parallelly profile somatic mutations of 33 cancer-related genes, MSI status and germline mutations. Moreover, 38 PIK3CA-mutant tumors with pMMR were also tested by the hybrid capture-based NGS testing to determine the somatic mutations of 33 cancer-related genes and MSI status. All 35 dMMR tumors were identified as MSI-H, whereas 38 pMMR tumors were MSS/MSI-L. The concordance rate was 100% between NGS-MSI and IHC testing. 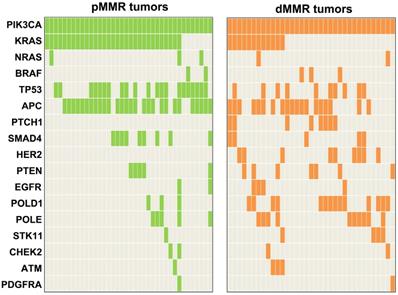 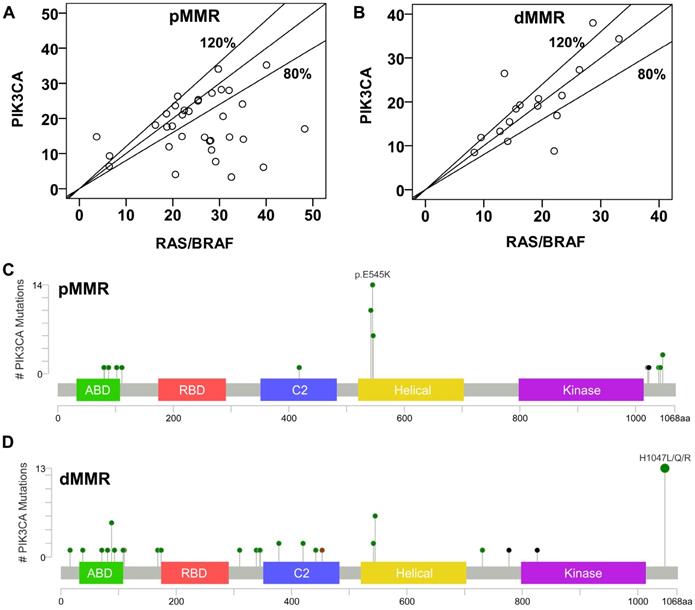 PIK3CA mutation is the most common alteration in PI3K pathway, which plays a pivotal role in tumor development [15]. PIK3CA mutation has been revealed to be a poor prognostic factor, and a negative predictive marker of anti-EGFR therapies in CRC [16]. In this study, we interrogated 528 Chinese CRC resection samples using NGS, and retrospectively investigated the molecular and clinicopathologic characteristics of PIK3CA-mutant dMMR CRCs stratified by MMR status.

Consistent with previous studies [6, 20], we found that lymph node metastasis, lymphovascular invasion, left colon/rectum location and TP53 mutation were more prevalent in pMMR tumors compared with dMMR tumors. Some studies have reported that less consistent or no correlations about the association of PIK3CA mutation and MMR/MSI status in CRC [17, 21]. However, these studies restrict to hotspot mutation analysis of PIK3CA exon 9 and 20 in western CRC population. We here screened PIK3CA mutation in all exon using NGS, and identified that PIK3CA mutation was more frequent in dMMR tumors than pMMR tumors in Chinese CRC patients.

There are some limitations in our study. First, although no significant difference of molecular characteristics was observed between the Lynch syndrome cases and non-Lynch syndrome cases in PIK3CA-mutant dMMR tumors, the number of Lynch syndrome cases was relatively small. Our findings need to be validated with future larger studies. Second, higher frequency of double PIK3CA mutations was observed in dMMR tumors than pMMR tumors, which we had to attribute to as-yet-unknown covariables. Further basic studies are needed to uncover the function of double PIK3CA mutations in dMMR CRCs.