Breast cancer is one of the leading lethal malignancies among women worldwide [1]. Clinical responses to antitumor therapies are often limited to a subset of patients [2]. Current strategies of breast cancer therapy include surgical resection and subsequent chemotherapy. The standard first-line chemotherapy has long been applied due to its superior efficacy and low toxicity. Despite its excellent and durable responses in the vast majority of cases, patients subjected to chemotherapy frequently experienced relapse within few years due to the development of acquired drug resistance. The current scenario strongly underlines the urgency to identify innovative and more effective molecular therapeutic targets for drug resistance of breast cancer. Although various studies have focused on drug resistance in breast cancer chemotherapy, the specific molecular mechanisms are still unclear. Thus, it is considerably interest to explore potential biomarkers that are significantly associated with drug resistance in breast cancer chemotherapy.

Long non-coding RNAs (lncRNAs) are a large class of non-protein-coding transcripts with length of > 200 bp. Although cumulative evidence has shown that lncRNAs are frequently deregulated in various diseases and are involved in numerous pathophysiological and biological processes such as proliferation, apoptosis, metastasis, and cell migration[3, 4], only a small numbers of lncRNAs have been characterized functionally[5, 6]. For instance, Liu et al. identified that LncRNA NKILA represses NF-kB signaling and cancer-associated inflammation via binding to NF-kB/IkB complex [7] and low NKILA expression is associated with breast cancer metastasis and poor patient prognosis [8]. However, the specific roles of lncRNAs in mediating drug-resistance and regulating breast cancer progression are not well studied.

A total of 35 primary breast infiltrating ductal carcinoma tissues and their paired normal tissues were surgically obtained at the First Affiliated Hospital of China Medical University. All cases were diagnosed both clinically and pathologically, and have not been preoperatively treated with chemotherapy, radiation therapy or endocrine therapy. After surgery, fresh tissues were snap-frozen in liquid nitrogen and stored at -80°C for total RNA extraction. Written informed consent was obtained from all study participants. This study was approved by the Ethics Committee of Human Study of China Medical University.

Total RNAs were isolated from three breast cancer tissues of patients with lymphatic metastasis and three corresponding normal tissues and quantified by NanoDrop ND-2000 (Thermo Scientific). RNA integrity was assessed using Agilent Bioanalyzer 2100 (Agilent Technologies). According to the manufacturer's standard protocols, mRNA samples were reverse-transcribed into cRNA and labeled with cyanine-3-CTP. The cyanine-3-CTP-labeled cRNA samples were hybridized onto the lncRNA microarray chips (Agilent Human lncRNA, 4*180K). After washing, the arrays were scanned by Agilent Scanner G2505C (Agilent Technologies). The obtained array images were analyzed using Feature Extraction software (version10.7.1.1, Agilent Technologies) to extract raw data, which were further analyzed using GeneSpring. To begin with, the raw data were normalized with the quantile algorithm. The probes with flags in “P” in at least 1 out of 2 conditions were chosen for further data analysis. Genes or lncRNAs with fold change ≥ 2.0 and p value ≤ 0.05 were considered as the differentially expressed ones. To understand the function of lncRNAs associated with the breast cancer, the Gene Ontology (GO) and KEGG analyses were performed to study the potential functions of the dysregulated lncRNAs and mRNA. Finally, network interaction of lncRNAs in the breast patients was constructed. At last, hierarchical clustering was performed to display the distinguishable expression pattern of these genes between samples.

Paclitaxel (Selleckchem) was prepared as a 10 μM stock solution in DMSO. Briefly, 1x106 cells were plated in 100-mm culture dishes. After 24 hours of incubation, cells were treated with 20 nM paclitaxel for a total of 5 days, with media refreshing at 3 days of treatment. After rinsed with PBS, cells were maintained in drug-free culture with media replacement every 48 hours until proliferative cell clones were established.

MTT assay was preformed using the Cell Growth Determination Kit (Sigma) as previously described [9]. Briefly, cells were seeded onto 96-well plates at 1x103 cells/well. After 24 hours of culture, cells were transfected with shRNA-LncRNA NONHSAT141924 or pcDNA-LncRNA NONHSAT141924 and treated with paclitaxel in 100 µL media. After 48 hours of treatment, 10 µL MTT (methylthiazol tetrazolium) solution was added into the media. After incubation at 37°C for 4 hours, the supernatants were removed, and cells were incubated with 100 µL of MTT solvent. Absorbance at 570 nm was spectrophotometrically measured using a BioTek ELx800. The assays were performed independently and repeated at least three times.

Transfected cells were seeded onto 6-well plates. After cultured to 90% confluence, cells were wounded by drawing a scratch line with the same width using a sterilized tip on the bottom of each well. At 72 hours after wounding, cell images around the scratch line were captured. Each experiment was repeated in triplicates.

24-well Transwell plates containing permeable polyethylene terephthalate membrane inserts with 8 µm pores (Invitrogen) were used. A total of 1x105 transfected cells in 100 µL FBS-free DMEM were placed on the top layer of the Transwell inserts. The bottom chambers were filled with DMEM containing 10% FBS. After 48 hours of incubation, non-migratory cells were removed from the top surface of the membrane and the cells that passed through the membrane were fixed with methanol and stained with 0.5% crystal violet. The number of migratory cells was counted using an inverted light microscope (Nikon).

Transfected cells were harvested and lysed in lysis buffer (Beyotime Biotech, Shanghai, China) and the lysates were subjected to Western blot analysis as described previously [11].

All statistical analyses were performed using SPSS version 19.0 software. All data are presented as mean ± standard deviation. The differences between two groups were analyzed using the Student t test. A p value less than 0.05 was considered statistically significant. All experiments were independently repeated at least three times.

Validation of the microarray data by qRT-PCR

LncRNAs and mRNAs expression profiles in breast cancer. A. Volcano plot, where the two vertical lines are the 2-fold change boundaries and the horizontal line is the statistical significance boundary (p < 0.05). Genes with fold change ≥ 2 and statistical significance are marked with red dots. B. Heat map and hierarchical clustering of lncRNA profile comparison between the breast cancer and paired normal breast samples. Each row represents one lncRNA, and each column represents one tissue sample. The relative lncRNA expression is depicted according to the color scale. Red indicates up-regulation and green indicates down regulation. The numbers 2.0, 0 and -2.0 are folds changes in the corresponding spectrum. 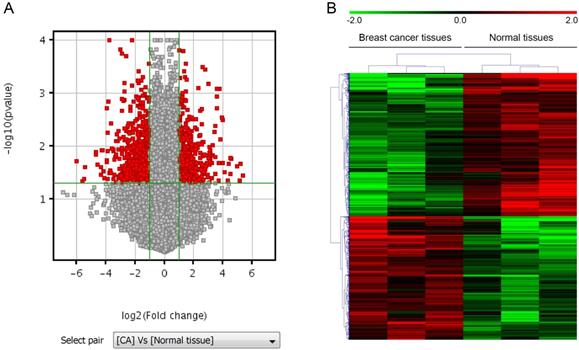 Comparison between microarray data and qRT-PCR results. Differential expression of NONHSAG014936, NONHSAT022406, NONHSAT089596, NONHSAG020595, FR278154 and NONHSAT141924 identified by microarray between 3 paired breast cancer samples and normal tissue samples was validated by qRT-PCR in 35 paired tissues. The expression levels of lncRNAs were normalized to that of U6. 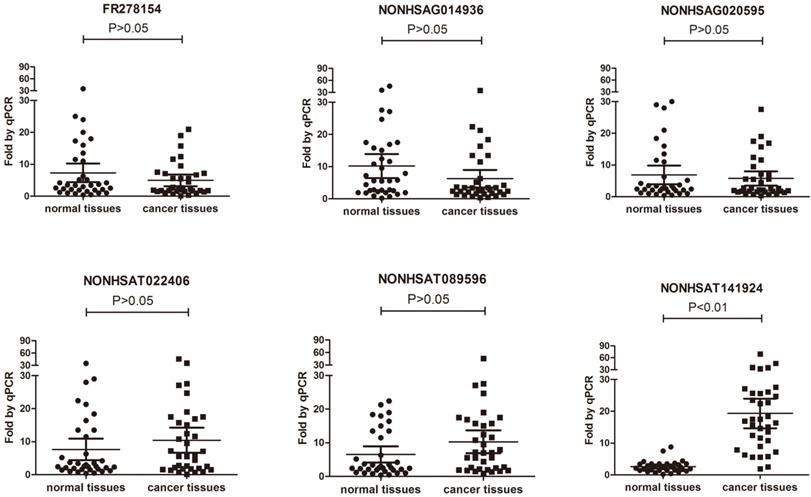 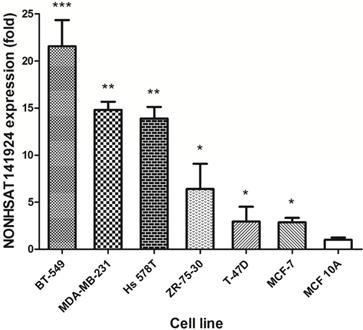 The LncRNA of differential expression.

The present study demonstrated that LncRNAs were differentially expressed both in vivo and in vitro in breast cancer and could play essential roles in chemotherapy resistance. Specifically, we identified LncRNA NONHSAT141924 as a novel LncRNA that positively regulates PTX-resistance. Furthermore, our results suggest that therapeutic inhibition of LncRNA NONHSAT141924 in breast cancer cells may significantly reduce cell survival rate and even reverse PTX-resistance phenotype by exerting an anabolic effect.

LncRNA NONHSAT141924 promotes PTX-resistance through p-CREB/Bcl-2 apoptosis signaling pathway in breast cancer. A. The survival rates of cells with LncRNANONHSAT141924 overexpression or knockdown and the blank control cells as measured using MTT assay under treatment of PTX with concentration ≥ 20nM (P < 0.05). B. The images of Western blot analysis showing the levels of Bcl-2, p-CREB, ABCB1, BCRP, E-cadherin, N-cadherin proteins in NONHSAT141924-overexpressed and knocked down cells. 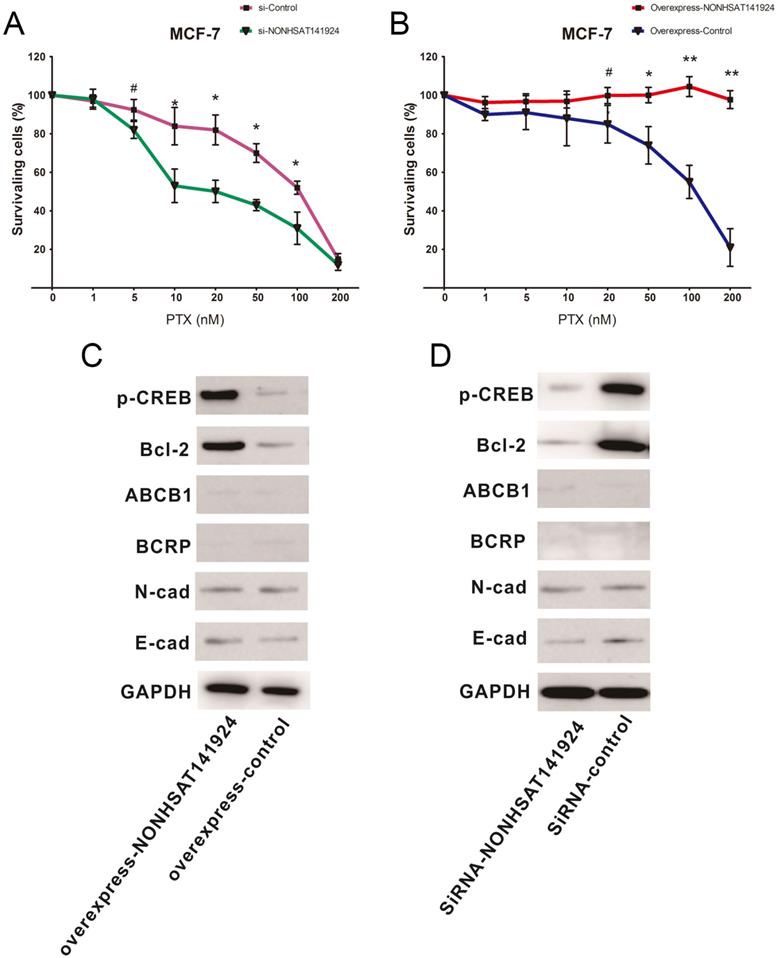 In summary, our study provides new findings that LncRNA NONHSAT141924 promotes paclitaxel chemotherapy resistance in breast cancer both in vitro and in vivo. LncRNA NONHSAT141924 functions through inhibiting p-CREB/Bcl-2 apoptosis pathway, one of the major pathways of chemotherapy resistance at present. These findings provide new insights into the possibility of using LncRNAs therapy for drug resistance in breast cancer. We anticipate that our study can provide a foundation for future investigations on the role of LncRNAs in regulating the breast cells' responses to chemotherapy and on the potentials of LncRNAs serving as an effective model system for studying gene regulation in the development of gene therapy for treating human cancers related to drug resistance.

This work was supported by the Science and Technology Plan Project of Liaoning Province (NO. 2013225585).