Osteosarcoma is the most common primary malignant tumor of bone that most commonly affects children, adolescents, and young adults, with a global incidence of approximately one to three cases per million annually [1, 2]. Surgical resection was the primary treatment before 1970. However, the survival of osteosarcoma patients treated with surgery alone is less than 20% [3]. The long-term survival rate was improved to 65-70% after the advent of multiagent chemotherapy regimens in the early 1970s, especially the combination of high-dose methotrexate, doxorubicin, and cisplatin (MAP) [4].

Osteosarcoma exhibits a predilection for the long bones near the metaphyseal growth plate and most commonly occurs in the distal femur (43%), proximal tibia (23%), or humerus (10%) [1, 2, 5]. The incidence is higher in adolescents of age 15-19, with eight to eleven cases per million annually, accounting for >10% of all solid cancers [6]. The patients with localized osteosarcoma that respond to preoperative combination chemotherapy always show good prognosis [7]. However, the overall 5‑year survival rate for patients with metastatic or relapsed osteosarcoma has remained at about 20% over the past 30 years [8]. The lung is the most common site of osteosarcoma metastasis (more than 85% of cases), with bone the second most common site [5]. Thus, seeking specific targets for early diagnosis and effective treatment is necessary.

Although candidate oncogenes (e.g., RUNX2, VEGFA, MDM2, and PRIM1) [9-12] and tumor suppressors (e.g., TP53, RB1, and PTEN) [13-15] have been identified in human osteosarcoma, the search for common molecular therapeutic targets in osteosarcoma has been disappointing to date [2]. Current clinical trials are focused on targeting the bone microenvironment (mainly osteoclasts and bone seeking) [8, 16], receptor tyrosine kinases (including Kit, VEGFR, FGFR, PDGFR, HER2, and IGF1R) [17-19], intracellular signaling pathways (SRC, mTOR, RAF, Aurora kinase A, and histone deacetylase) [20], and immune system [21-23]. Mifamurtide as an innate immune stimulant has shown clinical promise in the treatment of osteosarcoma [22, 23]. However, the strategies that target the bone microenvironment and signaling pathways remain controversial. For example, the Hedgehog, Notch, and WNT pathways have been implicated in both osteosarcoma and normal bone development, and targeted therapy may be problematic for children.

Osteosarcoma cell lines MG-63, Saos-2, U-2 OS, 143B, MNNG/HOS, and SJSA-1 were used for xenograft transplantation in BALB/c nude mice according to a previous report [24]. Briefly, 1×106 cells in 100 μL serum-free phosphate-buffered saline (PBS) were injected subcutaneously into each flank of locally bred BALB/c-nu mice (5 weeks old, female; five mice per group). The tumor size was measured every 5 days, and tumor volume was calculated by the formula (length×width×width)/2. For the highly tumorigenic cell lines, the experiments were stopped within a month. For the poorly tumorigenic cell lines, the experiments were stopped after 90 days.

shRNAs targeting HEY1 were cloned into the pLent-U6-RFP-Puro (Vigne, #LT88024) vector. Targeting sequences were as follows: shRNA-Ctr: 5′-GCACCCAGUCCGCCCUGAGCAAA-3′; shHEY1-1: 5′-GCAGGAGGGAAAGGUUACUUU-3′; shHEY1-2: 5′-CCCAACUACAUCUUCCCAGAU-3′. The 293T cell line was used for lentivirus packaging. Briefly, a 10-cm dish of 4×106 non-confluent 293T cells were co-transfected with recombinant pLent-U6-RFP-Puro (Vigene, LT88024), pMD2G (Addgene, #12259), and psPAX2 (Addgene, #12260) for knock-down (RNAi), and pLent-C-HA (Vigene, LT88007), pMD2G, and psPAX2 for overexpression. The lentivirus-containing supernatant was harvested after 48 h and used for the subsequent experiment.

Images of 143B cell-bearing mice were acquired using the Clairvivo OPT plus imaging system (SHIMADZU). Briefly, mice were anesthetized by 2% isoflurane gas for 5 min using the RC2 Anesthesia Machine (VetEquip). Then, postanesthetic mice were imaged under 530-nm laser irradiation at the experimental endpoint.

The microarray datasets in this study were obtained from the Gene Expression Omnibus (GEO, http://www.ncbi.nlm.nih.gov/geo/). Gene expression profiles (GSE36001 and GSE42352) were provided by Professor Leonardo A. Meza-Zepeda [25] and Professor Anne-Marie Cleton-Jansen [26], respectively. Both GSE36001 and GSE42352 contain the gene expression profiles of osteosarcoma cell lines MG-63, Saos-2, U-2 OS, 143B, MNNG/HOS, and SJSA-1 (or OSA). The Sanger software package (V1.0.8) (https://shengxin.ren/softs/Sanger_V1.0.8.zip) was used for volcano plot calculation and visualization.

Kaplan-Meier survival plots were generated using the R2: Genomics Analysis and Visualization Platform (http://r2.amc.nl). Briefly, osteosarcoma patients were divided into two groups based on the expression value of indicated genes, and the survival rate between the two groups was tested via log-rank test with P-value<0.05 considered significant.

All data were analyzed with GraphPad Prism 6 software and are provided as the mean ± standard error of the mean (SEM) unless otherwise indicated. Statistical analyses were performed using an unpaired Student's t-test. P<0.05 was considered to indicate statistical significance. 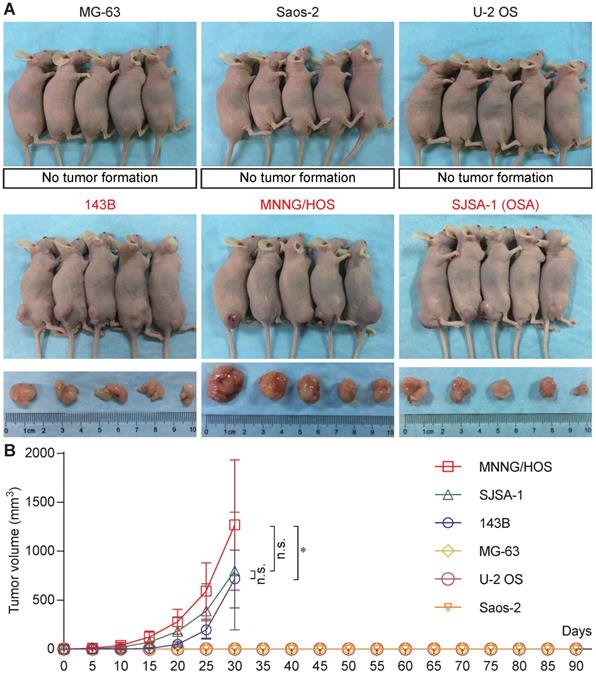 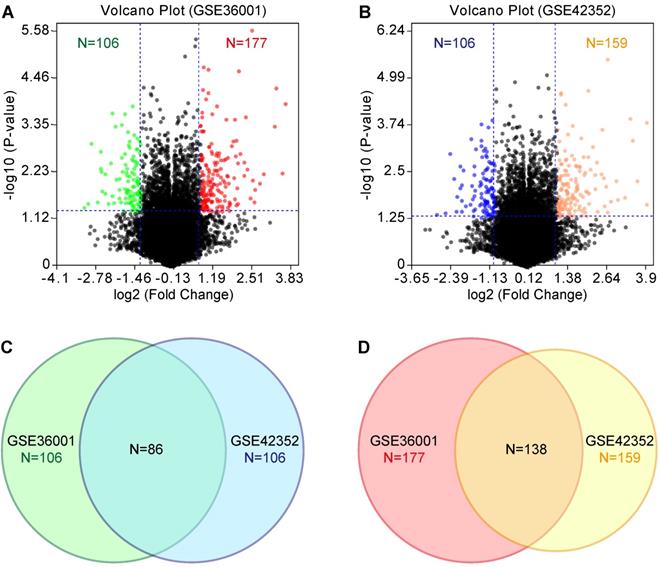 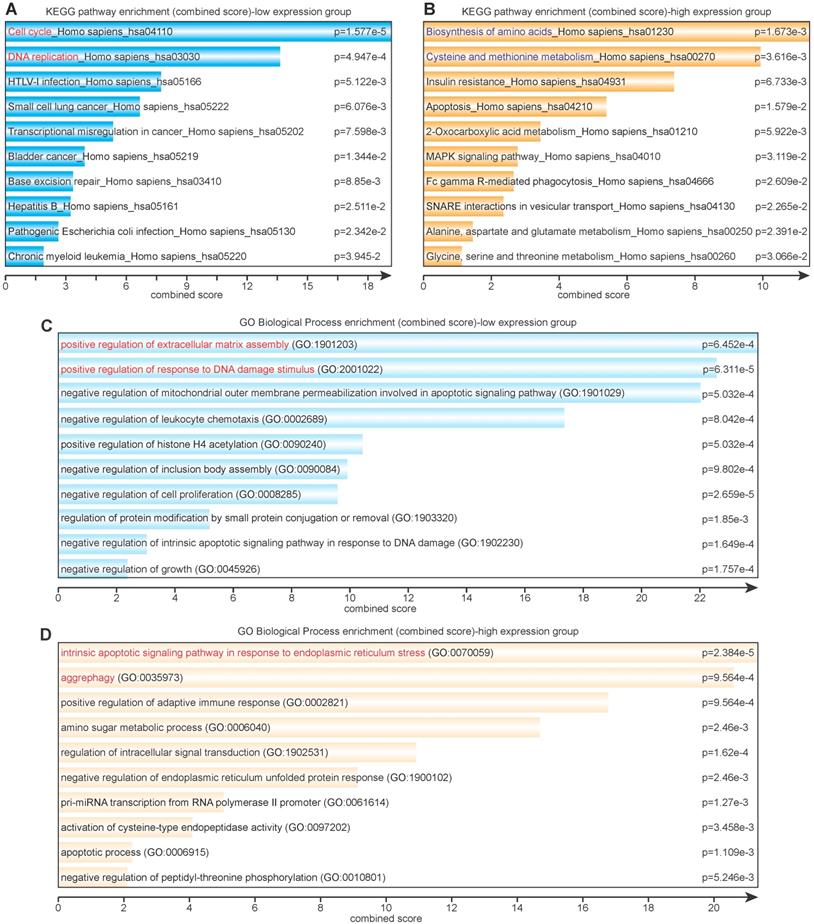 Importance of HEY1 in the tumorigenicity of 143B osteosarcoma cells

The protein expression level of HEY1 detected by western blot was consistent with the mRNA level in osteosarcoma cell lines (Figure 6A). Western blot analysis of changes in HEY1 expression showed that shHEY1-2 is more effective (Figure 6B) under an equivalent infection rate (Figure 6C). The 143B osteosarcoma cells with red fluorescent protein (mStrawberry) were visualized under visible light (Figure 6D) to monitor cell growth (Figure 6E). The appearance of subcutaneous tumors at the experimental endpoint (Figure 6E & F), tumor growth curves (Figure 6G), and tumor weight (Figure 6H) showed that knockdown of HEY1 mRNA inhibited the tumorigenicity significantly. On the other hand, overexpression of HEY1 in a non-tumorigenic cell line Saos-2 (Figure 6I) could help Saos-2 cells to obtain the tumorigenicity (Figure 6J-M). These results revealed that HEY1 is a key factor in the tumorigenicity of 143B osteosarcoma cells.

Identifying the tumorigenicity-associated genes in osteosarcoma is a valuable method for investigation of tumorigenic mechanisms. In this study, we evaluated the tumor-forming ability of six osteosarcoma cell lines. Three (143B, MNNG/HOS, and SJSA-1) were found to be tumorigenic, while the other three cell lines (MG-63, Saos-2, and U-2 OS) lacked tumorigenicity (Figure 1A). Thus, 143B, MNNG/HOS, and SJSA-1 were defined as the highly tumorigenic group, while MG-63, Saos-2, and U-2 OS were defined as the poorly tumorigenic group. Two microarray datasets from two independent studies containing the mRNA expression data of these six cell lines were used for analysis of differentially expressed genes. 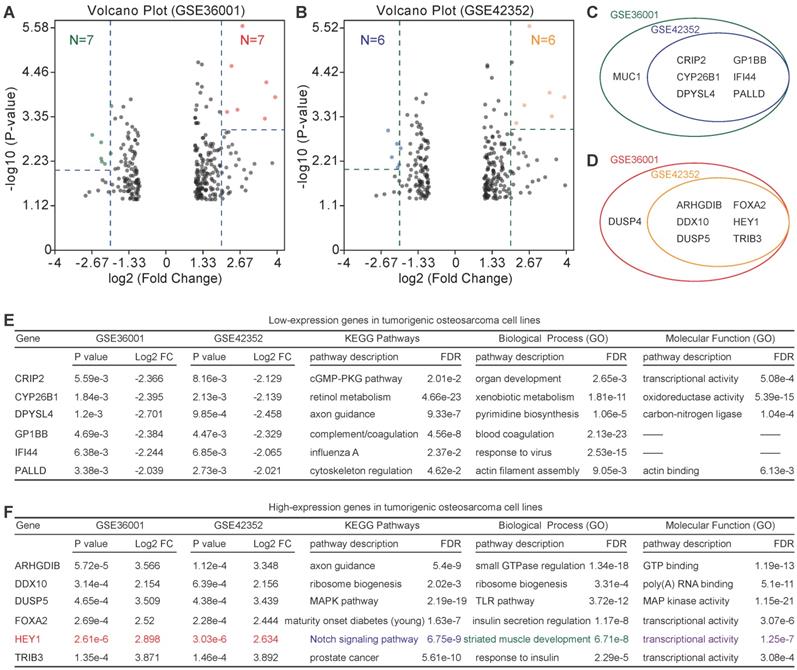 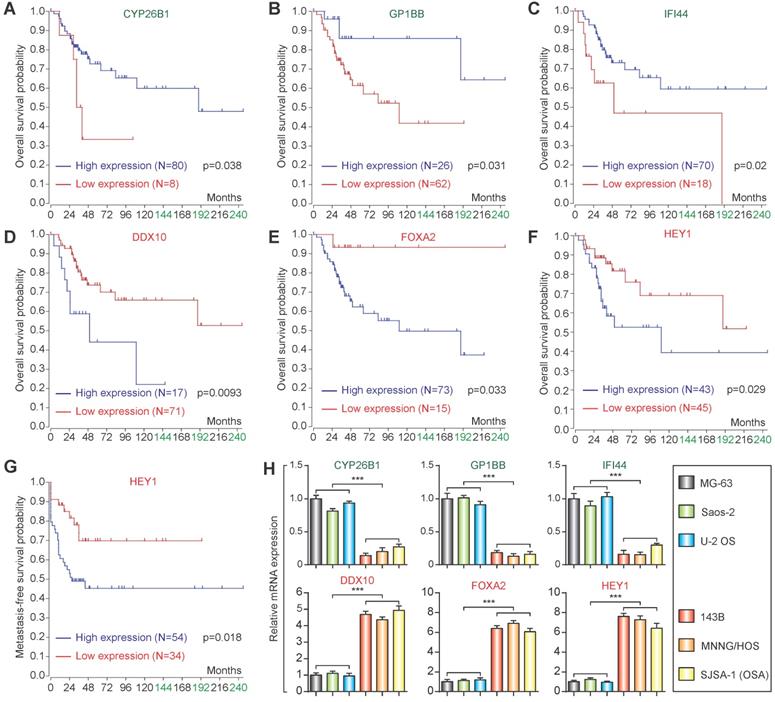 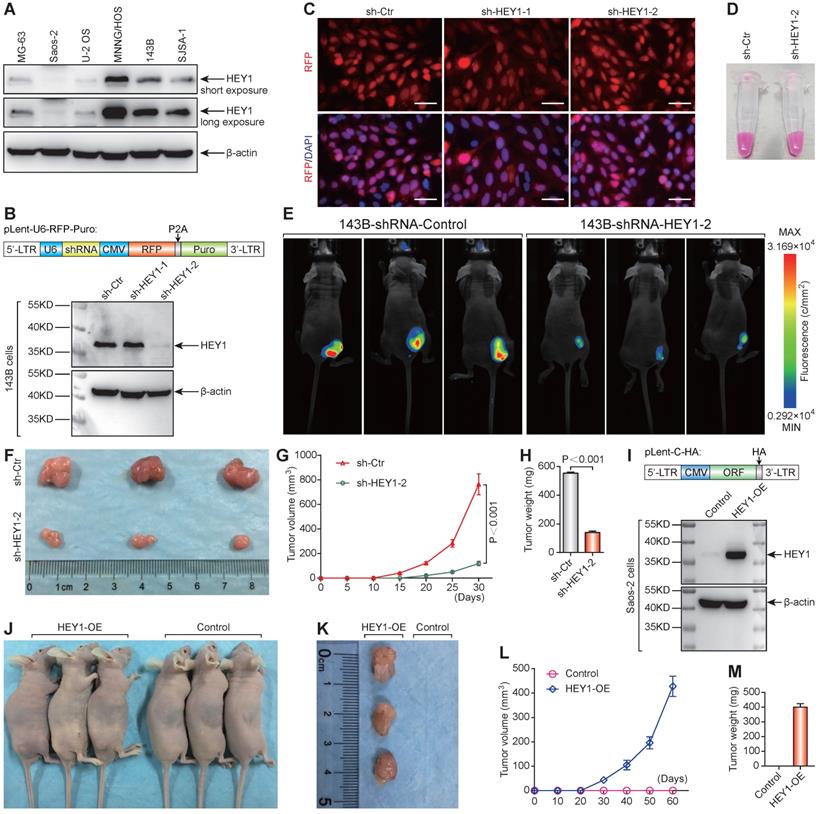 We noticed that HEY1 was highly expressed in the highly tumorigenic group with an extremely low P-value in both GSE36001 and GSE42352. In addition, the expression level of HEY1 was positively correlated with the tumorigenicity of osteosarcoma cell lines. Thus, HEY1 was selected for further investigation. In fact, HEY1 is a candidate oncogene that is highly expressed in glioblastoma [33, 34], rhabdomyosarcoma [35], hepatocellular carcinoma [36], head and neck squamous cell carcinoma [37], and renal cell carcinoma [38], among other cancers. It is also associated with poor prognosis in head and neck squamous cell carcinoma [37] and esophageal squamous cell carcinoma [39]. On the other hand, HEY1 acts a target gene of Delta-like canonical Notch ligand 4 (Dll4)-induced Notch signaling pathway activation and functions as an inhibitor of myogenesis [40]. Our data also proved that HEY1 is a key factor involved in the tumorigenicity of osteosarcoma cells. We anticipate that this result will promote preclinical studies on this malignant tumor.