Hepatoblastoma is one of the major malignant tumors in children and originates from the progenitor cell during embryogenesis, accounting for two-thirds of the pediatric malignant tumors [1]. The incidence rate is approximately 1.5 cases/million population per year (around 1% of cancers for young children) [2] and has been rising 4% per year continually [3]. This phenomenon is partly due to increased prematurity and very low birth weight [4,5]. The development of hepatoblastoma is also associated with some environmental factors, such as parental exposure to tobacco, metal and petroleum products [6-9]. Moreover, it is strongly associated with familial adenomatous polyposis [10], Beckwith-Wiedemann syndrome [11], and Glycogen storage disease [12], indicating some genetic underpinnings. Although progressive surgical techniques and chemotherapy regimens have increased survival rates, the prognosis of high-risk hepatoblastoma remains very poor [13]. As for the molecular mechanism, although Wnt/β-catenin, MYC, and Hippo pathways have been reported to be involved in the pathogenesis of hepatoblastoma [14-16], little is known about the molecular basis of this disease, and there are no validated prognostic or therapeutic biomarkers for hepatoblastoma patients.

LIN28B gene encodes an RNA-binding protein, which is featured by the conservative N-terminal cold-shock domain and two C-terminal CysCysHisCys zinc fingers [17]. LIN28B functions by blocking the maturity of tumor-suppressing microRNA (miRNA) let-7 family, which subsequently causes overexpression of numerous oncogenes, such as C-MYC and K-RAS, thereby supporting tumorigenesis and tumor growth [18,19]. Meanwhile, LIN28B itself is downregulated by let-7, leading to the formation of double-negative feedback [20]. In this way, LIN28B is aberrantly expressed in a broad spectrum of tumors and engaged in the regulation of miRNAs [18,20,21]. A study showed that LIN28B is sufficient to drive liver tumors in the let-7 miRNA dependent and independent ways in endogenous tumor models and is over-activated in mouse models of MYC-driven hepatoblastoma [19], which indicates its essential role in the development of hepatoblastoma.

We enrolled 275 histopathologically diagnosed hepatoblastoma patients and 1018 cancer-free controls from Guangdong, Henan, Shaanxi, Yunnan and Liaoning provinces (Supplemental Table 1). All controls are unrelated to patients genetically. Moreover, controls were matched to patients by age, gender, and ethnicity. Our study was approved by the Ethics Committee of Guangzhou Women and Children's Medical Center. Written informed consent was obtained from each patient or his/her guardian. The study protocol was compliant with ethical guidelines.

Four LIN28B polymorphisms (rs314276 C>A, rs221634 A>T, rs221635 T>C and rs9404590 T>G) were chosen and genotyped using the TaqMan real-time PCR method as we reported previously [22, 23]. Briefly, the selected polymorphisms were all potentially functional SNPs according to SNPinfo online software (https://snpinfo.niehs.nih.gov/snpinfo/snpfunc.html), which can affect the binding capacity of transcription factor binding sites (rs314276) or microRNA binding sites (rs221634 and rs221635), or leading to amino acids alterations (rs9404590). To validate the accuracy of genotyping results and for quality control, approximately 10% of the samples were randomly selected and re-genotyped. The concordance for the quality control samples was 100%.

GTEx Portal database (https://www.gtexportal.org/home/) was used to evaluate the correlation between genotypes of the selected polymorphisms and LIN28B mRNA expression levels [24].

The χ2 test was used to evaluate the demographic variables distribution, risk factors distribution, and LIN28B genotype distributions between case and control groups. The χ2 test was also performed to assess whether or not the LIN28B genotypes were consistent with Hardy-Weinberg equilibrium (HWE). Unconditional univariate and multivariate logistic regression analyses were used to estimate the strength of association between the selected polymorphisms and hepatoblastoma risk, using odds ratio (ORs) and 95% confidence intervals (CIs). Age and gender were adjusted for in the multivariate analysis. Further stratification analysis was performed based on the age, sex, and clinical stages. Moreover, we also performed false-positive probability analysis (FPRP) analysis to verify the significant results from the combined subjects [25]. Differences with P values <0.05 were counted as statistically significant. All two-sided statistical analyses were performed using SAS software (version 9.1; SAS Institute, Cary, NC, United States).

General characteristics of the subjects

We found that the rs9404590 T>G polymorphism was significantly associated with altered gene expression in transformed fibroblast cells using data from the GTEx Portal (P=2.20*10-4, Figure 1).

We preset 0.2 as the FPRP threshold. As shown in Table 3, at the prior probability of 0.1, the significant findings for the rs314276 C>A polymorphism remained noteworthy on the rs314276 AA genotype (FPRP=0.064), recessive model (FPRP=0.037) and the III+IV stage tumor (FPRP=0.144). All of the significant finding in rs9404590 T>G disappeared. Moreover, in the combined analysis, results with 4 risk genotypes remained noteworthy when compared with results with a risk genotype (FPRP=0.052) and 1-3 genotypes (FPRP=0.078), and in the stratified analysis, results of stage III+IV tumors also reached FPRP threshold (FPRP=0.144). 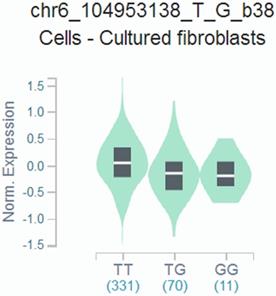 The LIN28B gene is located on chromosome 6q21 and encodes a miRNA-binding protein [26]. The heterochronic LIN28 gene the in Caenorhabditis elegans [27], and its mammalian homologue LIN28B gene is complementary to lin-4 homologues miR-125 and let-7 critical by the segment of the unusually long 3' untranslated region (UTR) in diverse mammalian tissues [17, 27-29]. In this way, LIN28B sustains the proliferative and metabolic capacities of pluripotent stem cells and facilitates the transition of them from naive to primed pluripotency [17, 30-32]. Since LIN28B functions as a key regulator in the diverse developing events, SNPs in the 3' UTR may play important roles. SNPs in this gene have been extensively explored concerning the regulation of secondary sexual characteristics and tumorigenesis. For example, LIN28B rs314276 C>A polymorphism has been shown to associate with reproductive timing [33,34], central precocious puberty [35], the linkage between puberty timing and adult disease [36], and the finger-length ratio [37]. Meanwhile, this variant was also found to be associated with the risk and survival of cancers, such as Wilms tumor [22], neuroblastoma [23] and epithelial ovarian cancer [38]. Previous data also showed that LIN28B rs221634 A>T, rs221635 T>C, and rs9404590 T>G were related to the susceptibility to Wilms tumor [22] and neuroblastoma [23].

The LIN28B is upregulated to repress the function of the tumor suppressor miRNA let-7 family in the diverse tumor types and serve as a regulator of miRNA [20,39-41]. The overexpression of LIN28B can lead to the activation of several oncogenes [42]. In the previous study, miR-100, let-7a, and the Caenorhabditis elegans lin-4 orthologue miR-125b are sharply downregulated in the hepatoblastoma [43]. It is noteworthy that two of the miRNAs (miR-125b and let-7a) in the cluster are LIN28B-related miRNA [27], indicating a potential molecular mechanism. Meanwhile, LIN28B and AURKA expressions were upregulated in a transcriptomic and genomic analysis of human hepatoblastoma, and miRNA-26-5p inhibited hepatoblastoma by repressing LIN28B [44]. LIN28B might also increase the risk of hepatoblastoma through LIN28B-RAN-AURKA pathway [44]. The previous study showed that LIN28B is an oncofetal cancer stem cell-like marker in the recurrence of hepatocellular carcinoma [45]. Hepatocellular carcinoma may have similar molecular mechanisms with hepatoblastoma, such as the activation of the Wnt/β-catenin signaling pathway [46-49]. Therefore, it was reasonable to investigate the genetic implication of the LIN28B gene in the risk of hepatoblastoma.

Despite the findings that LIN28B rs94904590 T>G and rs314276 C>A could increase hepatoblastoma risk, the study suffered from some minor limitations. First, we did not find the exact molecular mechanism underlying the established associations in the study. Secondly, the sample size might be small to conclude, partly due to the low incidence rate of the disease. Validation experiments are needed in the future. Thirdly, we only recruited the Han Chinese people in our study. Fourthly, we only included four potentially functional SNPs in the LIN28B gene, other SNPs including the ones without functional were not included in the current study. Finally, functional experiments should be performed to further explore the role of LIN28B in the carcinogenesis of hepatoblastoma.

aChi-square test was used to calculate the genotype frequency distributions, bStatistical power was calculated using the number of observations in each subgroup and the corresponding ORs and P values in this table.

In all, our study demonstrated that LIN28B rs94904590 T>G and rs314276 C>A might confer increased hepatoblastoma risk in Chinese children. In the future, studies with a larger sample size are called to clarify the impact of LIN28B SNPs on the risk of hepatoblastoma.

This study was funded by grants from the National Natural Science Foundation of China (No: 81800453) and the Guangdong Provincial Key Laboratory of Research in Structural Birth Defect Disease (No: 2019B030301004). The funders have no role in the manuscript writing, editing, approval, or decision to publish.