Background: CircRNAs play important roles in cancer development and progression and have the potential to serve as cancer biomarkers. The aim of this study was to investigate the role of circular RNA CCDC66 (circCCDC66) in gastric cancer and to reveal the underlying mechanisms.

Conclusion: CircCCDC66 promotes GC growth and metastasis by activating c-Myc and TGF-β signaling pathways, suggesting that it may serve as a potential biomarker for GC.

Gastric cancer (GC) is one of the most common cancers worldwide with high morbidity and mortality [1,2]. Although many advances have been made in the diagnosis and treatment of this disease, the prognosis of GC patients remains poor with a 5-year overall survival less than 30% in most countries [3]. Therefore, there is an urgent need to further understand the molecular mechanism for GC development and progression and to seek for biomarkers for GC early diagnosis and prognosis prediction.

Circular RNAs (circRNAs) are noncoding RNAs that are covalently linked to form a closed circular structure without 5' caps and 3' tails [4,5]. CircRNAs display cell or tissue specific expression and are conserved across species due to their resistance to RNase R. Compared to their linear counterparts, circRNAs are highly stable and accumulate in both nucleus and cytoplasm, indicating important roles in human health. CircRNAs participate in a wide range of biological processes, including transcription [6], mRNA splicing [7], RNA decay and translation [8], and their dysregulation leads to abnormal cellular functions and human diseases, such as cardiovascular diseases [9], temporal lobe epilepsy [10], Alzheimer's disease [11], metabolic diseases [12], and cancer [13]. Emerging evidence suggest that some circRNAs act as miRNA sponges [14,15] and interact with RNA binding proteins (RBPs) [16,17] to modulate gene expression. For instance, ciRS-7 serves as miR-7 sponge to regulate the expression of several oncogenes [18] and circHIPK3 as miR-124 sponge to suppress cell proliferation in multiple cancers [19].

Recent studies suggest that circRNAs are deregulated in various cancers, including hepatocellular cancer (HCC) [20], colorectal cancer (CRC) [21], esophageal squamous cancer [22], and breast cancer [23]. CircRNAs are involved in cancer growth, metastasis, and therapy resistance [24,25]. CircRNAs have also been shown to play important roles in gastric cancer proliferation, migration and metastasis and can serve as diagnostic biomarkers [26]. Zhang et al. demonstrate that the expression of circLARP4 is downregulated in GC tissues and circLARP4 represents an independent prognostic factor for overall survival of GC patients [27]. Liu et al. demonstrate that circYAP1 functions as a tumor suppressor in GC cells by targeting the miR-367-5p/p27 axis and it provides a prognostic indicator of survival in GC patients [28]. Yang et al. demonstrate that circ-CTNNB1 activates β-catenin signaling to promote gastric cancer progression through DDX3-mediated transactivation of YY1 [29]. These findings suggest that circRNAs are crucial for gastric cancer development and progression and have great promise to be used as biomarkers and targets for gastric cancer diagnosis and therapy.

Circular RNA CCDC66 (circCCDC66) was previously found to be highly expressed in human colorectal cancer and could promote CRC growth and metastasis [21]. However, its role in gastric cancer has not been reported yet. In this study, we found that the expression of circCCDC66 was increased in gastric cancer tissues and cell lines, and its expression level was associated with tumor stage and lymphatic metastasis. CircCCDC66 knockdown inhibited while circCCDC66 overexpression promoted GC growth and metastasis by inducing epithelial to mesenchymal transition (EMT) through the activation of c-Myc and TGF-β signaling pathways.

A total of 70 patients with gastric cancer who underwent gastrectomy at the First People's Hospital of Zhenjiang between November 2015 and October 2017 were enrolled in this study. The adjacent non-cancerous tissues were collected at 5 cm away from the tumor site. Tumor stages were classified following the 8th edition tumor-node-metastasis (TNM) classification system of the American Joint Committee on Cancer. Histological grade was assessed by two experienced pathologists. All the patients enrolled in this study had not received any radiation or chemotherapy and had no other cancers before. This study was approved by Institutional Reviewing Board of First People's Hospital of Zhenjiang and informed consent was obtained from each patient.

Control and circCCDC66 siRNAs were synthesized by Hanbio Biotechnology (Shanghai, China). The sequences of siRNAs were as follows: si-circCCDC66: 5'-CAAUUAGAGCAUCAGGAAATT-3'; si-control: 5'-UUCUCCGAACGUGUCACGUTT-3'; si-TGF-β1: 5'-GCAGAGUACACACAGCAUATT-3'; si-c-Myc: GUGCAGCCGUAUUUCUACUTT. GC cells (2×105/well) in logarithmic growth period were transfected with overexpressing plasmid and silencing siRNAs by using LipoFiter (Hanbio, Shanghai, China) according to the manufacturer's instructions. Cells were collected at 36 hours after transfection. The transfection efficiency was assessed by qRT- PCR.

At 24 hours after transfection, the cells were collected and plated into 24-well plates at 104 cells/well. The number of cells were counted every day for consecutive 6 days. For colony formation assay, the transfected cells (103 cells/well) were plated into the 6-well plates and cultured for consecutive 10 days. The colonies were fixed with polyformaldehyde and stained with 0.1% crystal violet.

For cell migration assay, the transfected cells (2×104 cells/well) were suspended in serum-free medium and plated on the upper chamber of transwell with 8 μm size pore (Corning, NY, USA). For cell invasion assay, the transfected cells (1×105cells/well) were placed in the upper chamber of transwell with 50 μl matrigel coated. The lower chamber of transwell was filled with 600 μl RPMI 1640 medium containing 10% FBS. After incubation for 36 h, the cells on the surface of upper chamber were removed by scraping with a cotton swab, while the cells on the lower surface of the inserts were fixed with polyformaldehyde for 30 min and stained with 0.1% crystal violet for 15 min. After that, each insert was counted under an inverted microscope (Olympus, Tokyo, Japan).

The transfected cells were plated in 6-well plates (4×105 cells /well). Wounds were created by using a 100 μl pipette tip at 24 hours after inoculation. Then, the floating cells and debris were washed out by PBS. Wound healing was observed at different time points and the control group and experimental group were photographed at the same time.

Cells were harvested at 36 hours after transfection and then stained with Annexin Alexa Fluor 647 and PI at room temperature in dark for 15 min. FACSCalibur flow cytometry (BD Biosciences, San Jose, CA, USA) was used to evaluate the percentage of apoptotic cells. Finally, Cell Quest Software was used to analyze the data.

4-6 weeks old male athymic nude mouse were purchased from Nanjing Model Animal Center (Nanjing, China) and maintained in SPF condition with a standard 12-h light-dark cycle. SGC-7901 cells transfected with si-circCCDC66 and si-control were suspended in PBS (6×106/200 μl) and then subcutaneously injected into the mice. Tumor growth was monitored twice per week. Tumor volume was evaluated using the formula 0.5× (a×b2), in which a means the long diameter, b represents the short diameter. Four weeks later, the mice were sacrificed and the tumor tissues were harvested. The tumor tissues were weighed and fixed in 4% formalin for immunohistochemical analysis.

All the data were expressed as mean ±SD. Chi-square test or one-way analysis of variance (ANOVA) were conducted by using SPSS20.0 software (SPSS, Chicago, IL, USA) to compare the statistical differences. The results were considered statistically significant when P-value<0.05. 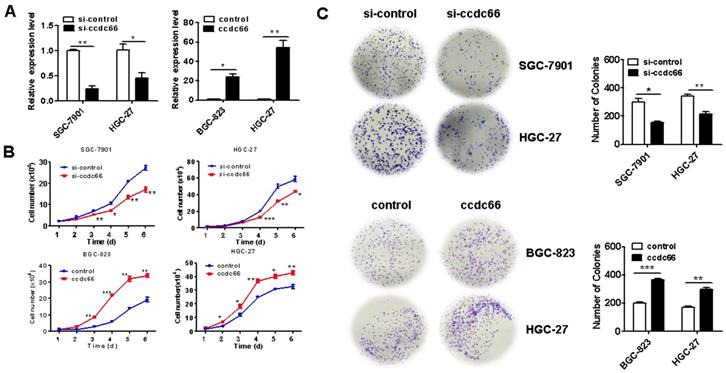 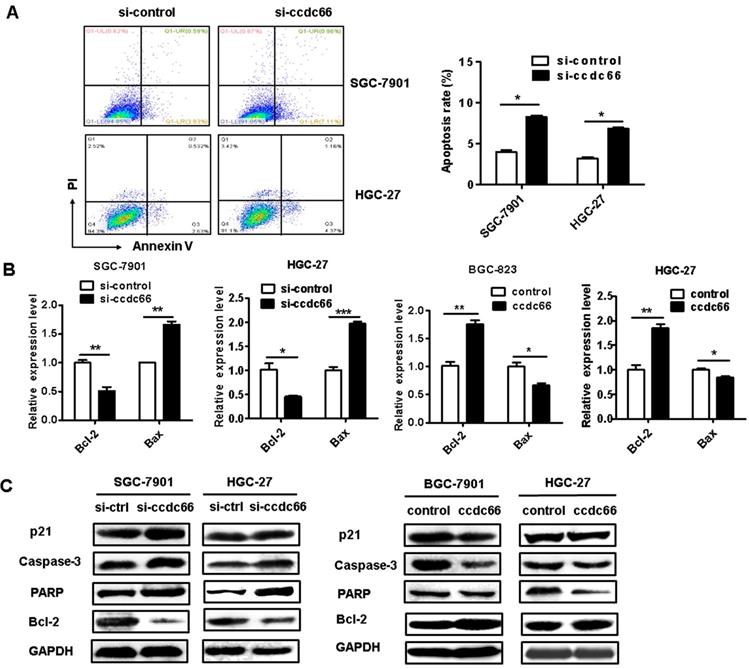 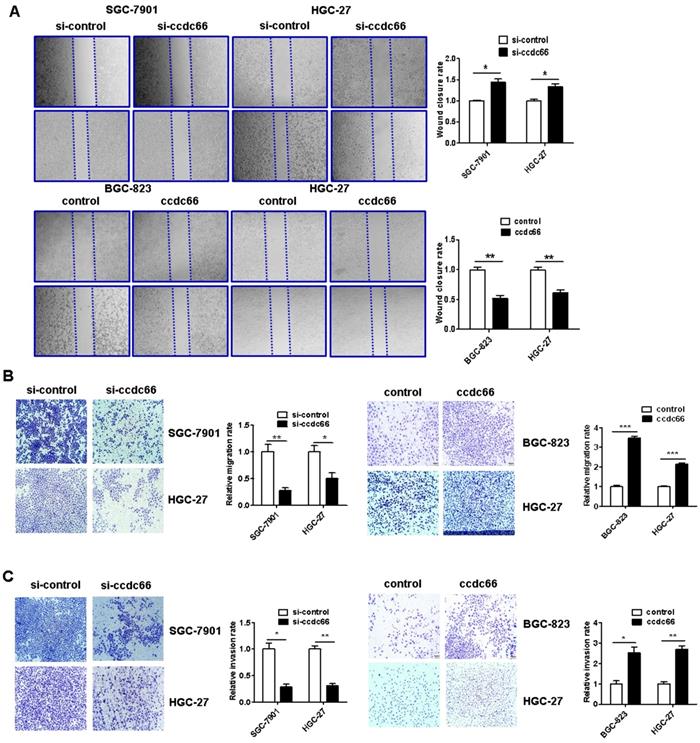 c-Myc and TGF-β1 knockdown abrogates the promotion of GC cell proliferation, migration, and invasion by circCCDC66 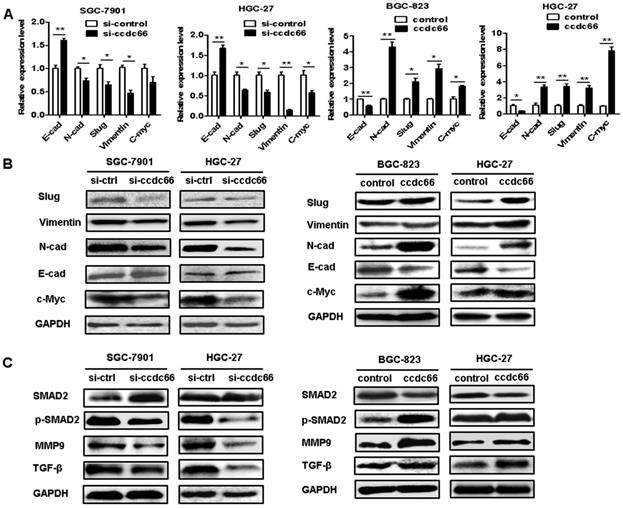 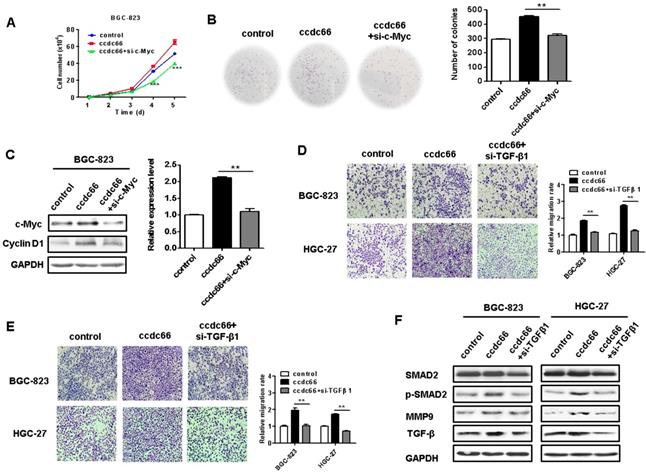 In recent years, circular RNAs have attracted great interest in cancer research field. Several circRNAs have been discovered to be aberrantly expressed in tumor tissues, plasma, serum and gastric juice of GC patients [30-32]. However, the expression pattern and biological function of circCCDC66 in GC have not been revealed. Herein, we reported that circCCDC66 was upregulated in GC tissues and cell lines, and its upregulation was significantly associated with tumor stage and lymphatic metastasis, suggesting a potential of circCCDC66 to be used as a marker for GC diagnosis. We further investigated the effects of circCCDC66 on gastric cancer progression and elucidated the underlying mechanisms. We found that depletion of circCCDC66 suppressed the proliferation, migration and invasion of GC cells but promoted the apoptosis of GC cells. CircCCDC66 overexpression showed the opposite effects. The results of in vivo study showed that the tumors in si-circCCDC66 group had smaller volumes and weights than that in si-control group, implicating that circCCDC66 is critically involved in GC progression.

CircRNAs have been identified as critical regulators of gene and protein expression in gastric cancer [33-37]. For instance, the expression of circOSBPL10 is upregulated in GC tissues and its level is a prognostic marker of the overall survival and disease-free survival of patients with GC. CircOSBPL10 promotes the growth and metastasis of gastric cancer by regulating miR-136-5p-WNT2 axis [38]. The expression of circAKT3 is higher in cisplatin (CDDP)-resistant GC tissues and cells than that in CDDP-sensitive samples. CircAKT3 promotes DNA damage repair and inhibits the apoptosis of GC cells by sponging miR-198 to upregulate PIK3R1 expression [39]. CircCCDC66 expression is first discovered to be elevated in colon cancer and is associated with poor prognosis [21]. CircCCDC66 controls cell proliferation, migration, and invasion via regulation of a subset of oncogenes. Recently, Wen et al. demonstrate that circCCDC66 targets DCX to regulate cell proliferation and migration by sponging miR-488-3p in Hirschsprung's disease [40]. Recently, Yang et al. suggest that circCCDC66 knockdown attenuates the proliferative and invasive abilities of GC cells by regulating miR-1238-3p/LHX2 axis [41]. In consistent with these findings, we reported that circCCDC66 was upregulated in GC tissues and cells and circCCDC66 overexpression promoted while circCCDC66 knockdown inhibited GC cell proliferation, migration and invasion, suggesting that circCCDC66 plays an oncogenic role in GC.

EMT is closely associated with tumor progression and metastasis and is regulated by various signaling pathways [42]. The previous studies have shown that circRNAs could induce EMT to promote tumor progression. For example, Li and colleagues demonstrate that cir-ITCH inactivates wnt/β-catenin pathway to inhibit esophageal squamous cell carcinoma [43]. Recently, Zhou et al. suggest that circRNA_0023642 could promote GC cell migration and invasion through the regulation of EMT [44]. In this study, we showed that circCCDC66 knockdown inhibited the expression of TGF-β and inactivated SMAD signaling pathway, thus reversing EMT in GC cells, suggesting that circCCDC66 is an important regulator of EMT in gastric cancer. We also found that circCCDC66 knockdown decreased while circCCDC66 overexpression increased the expression of c-Myc in GC cells. Our results are consistent with that reported by Hsiao et al. showing that circCCDC66 could upregulate c-Myc expression by acting as miRNA sponge for miR-33b and miR-93 [21]. However, the mechanism by which circCCDC66 regulate c-Myc and TGF-β signaling pathways in GC cells is currently unknown and deserves further investigation.