Materials and Methods: A total of 120 consecutive cases were included in this study. Lung tumors were removed intraoperatively by wedge resection, and stump smear cytology was performed, from which the cases were classified into 5 groups based on our classification. When the tumor was classified as Group I or II, the operation was finished. When diagnosed as a more advanced classification, a lobectomy and lymph node dissection were additionally performed.

Conclusion: Use of cytological findings along with Nakayama-Higashiyama's classification for determining operation procedure is effective for treatment of patients with small-sized pulmonary adenocarcinoma.

With the improved resolution of computer tomography (CT) and/or spread of CT screening, we often find small multiple ground-glass opacities (GGOs) in lesions in the lungs. It is often difficult to diagnose these lesions with bronchoscopy alone. Intraoperative diagnosis is often needed for these lesions. In addition, the incidence of second primary lung cancer after resection of non-small cell lung cancer (NSCLC) has been estimated to be 1% to 4% per patient-year,1-4 and even after resection of stage I NSCLC, the incidence was reported to be 2% per patient-year.4 In such cases, a lobectomy can disturb future therapeutic options for other lesions or second primary lesions.

It was recently reported that a limited pulmonary resection procedure, including a wedge resection and segmentectomy, was not inferior to lobectomy for the management of peripheral small-sized pulmonary adenocarcinomas, especially adenocarcinoma in situ (AIS) or minimally invasive adenocarcinoma (MIA) in the International Association for the Study of Cancer (IASLC)/American Thoracic Society (ATS)/European Respiratory Society (ERS) classification of lung adenocarcinoma.5,6 The survival of patients with AIS or MIA is 100% at 5 years after the operation.7 In the early stage of such types of lung cancers, it is better to resect the lesion with wedge resection, which needs limited hilar vessel handling compared to segmentectomy, considering the potential need for future surgery. To decide whether to perform a limited pulmonary resection or lobectomy, a method of intraoperative diagnosis is needed.

The lung tumors in the present patients were resected by wedge resection. The samples were cut at the center of the tumor and smeared onto microscope slides. The preparations were immediately fixed in the operation room and evaluated (Supplement Fig. 18).

Since 1993, we have been performing imprint cytology intraoperatively and classifying the samples into 5 groups based on the N-H classification (Table 1, Supplement Fig. 28), as recently reported.8 For the present study, adenocarcinomas smaller than 2 cm, excluding mucinous adenocarcinoma cases, were examined.

Since August 2005, we have been performing limited surgery with intraoperative imprint cytology based on the N-H classification. The present study included consecutive patients with small lung adenocarcinoma (≤1.5 cm) or GGO-predominant small adenocarcinoma (≤2.0 cm) tumors. Patients with clinical T1a-bN0 lung adenocarcinomas according to the 8th edition and who underwent surgery from August 2005 to February 2010 and subsequent follow-up were analyzed. Written, informed consent was obtained from all patients, and the ethical review board of our institution approved this study (Approval No. 18055).

The algorithm for deciding operation extent is shown in Figure 1. Choice of a limited resection, wedge resection, or segmentectomy was determined according to tumor location, and then the procedure was planned and performed for all patients. Imprint cytology, N-H classification, and margin cytology procedures were performed on an intraoperative basis. In cases of mucinous adenocarcinoma, the patient was excluded from the analysis. When the tumors were classified as N-H Group I or II and the margin cytology was negative, the operation was finished at that point. In patients with tumors classified as N-H Group III, conversion to a segmentectomy or lobectomy with lymph node sampling was done. In addition, after converting to segmentectomy, when any lymph node was diagnosed as positive, we converted to lobectomy along with mediastinal lymph node dissection. In cases classified as N-H Group IV or V, we converted to a standard operation including lobectomy and mediastinal lymph node dissection.

Differences in incidence between 2 or more groups were compared using contingency table analysis with Pearson's χ2 test. Kaplan-Meier analysis and the log-rank test were used for survival curves and their comparisons, respectively. Values of p≤0.05 were considered significant.

The 5-year-survival rate (5YSR) of the entire cohort was 98.2%. The 5YSR of Groups I and II, which included patients who underwent mainly a wedge resection or segmentectomy, was 100%, while the rates for Groups III and Group IV-V were 95.8% and 94.4%, respectively (p=0.53, Fig. 3). The cause of death of patients in Group III was another type of cancer or pancreatic cancer, while that in Group IV-V was the lung cancer itself. 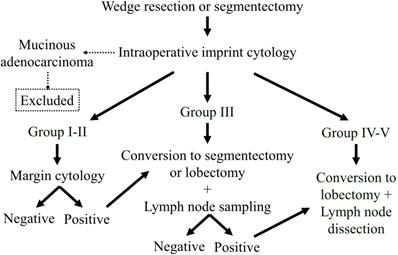 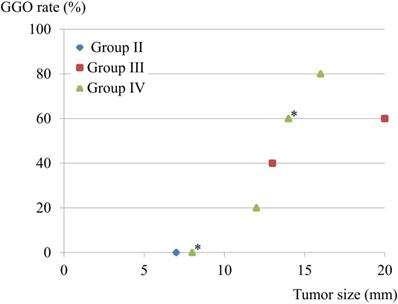 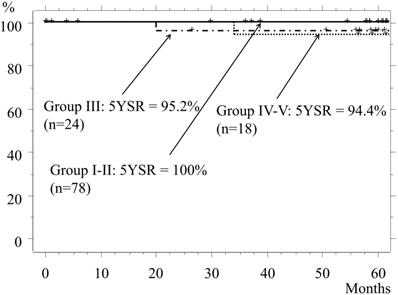 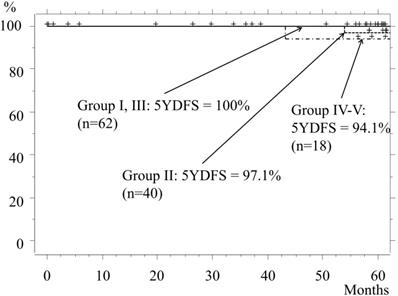 The 5-year disease-free survival (5YDFS) rate for the entire cohort was 98.1%, whereas the rates for Groups I and II were 100% and 97.1%, respectively. In Group II, recurrence from the margin after undergoing a wedge resection occurred in 1 patient, in whom the tumor had a GGO rate of 55% and was 11 mm in size. Even though margin cytology findings were negative, recurrence appeared at 54 months (4.5 years) after the operation, for which the patient underwent re-operation with a lobectomy. After that surgery, neither recurrence nor metastasis was seen for at least 4 years. The 5YDFS rates for Groups III and IV-V were 100% and 94.1%, respectively (Fig. 4).

Previous studies have reported that the malignancy of a small size pulmonary adenocarcinoma could be predicted using cytological diagnosis of imprint smears during a standard operation.9, 10 Furthermore, they concluded that such findings could provide important clinical information for planning the surgical procedure. However, there are no known reports of cytological results being applied to a surgical procedure. This is the first study of the clinical application of cytological classification in cases of small lung adenocarcinomas.

Several studies have presented the findings of limited resection for small pulmonary adenocarcinomas using intraoperative frozen sections.5, 6 However, for tumor diagnosis with a frozen section, an adequately sized sample is required, which is difficult with small tumors. On the other hand, an imprint smear method only uses the surface of the section and can provide a diagnosis within 15 minutes. In addition, we previously reported that the N-H classification is correlated with the IASLC adenocarcinoma pattern classification, the 4th WHO histological grading, and the 8th IASLC/ATS/ERS classification.8 Therefore, for intraoperative small tumor diagnosis, a cytological approach has some advantages over a frozen section method.

The indications for surgery in the present patients were scrupulously selected. Tumors that were ≤2 cm in size or >1.5 cm with less than 50% GGO were included. We previously reported that the GGO rate was related to prognosis in patients with small adenocarcinomas.11 In addition, another of our previous reports showed that the survival and disease-free rates of patients after a lobectomy for adenocarcinomas sized 16-20 mm and containing less than 50% GGO were significantly worse than for patients who underwent wedge resection for GGO-predominant adenocarcinomas.12

Cases with mucinous lesions were not included in the present study, because the smear sample from them contains mainly mucus and histiocytes, rarely tumor cells. In addition, a mucinous adenocarcinoma can easily spread in an aerogenous manner.13, 14 Furthermore, their tumor cells can spread from a macroscopic lesion widely throughout the surrounding lung parenchyma in an area larger than expected. Therefore, we considered that limited surgery was not indicated for cases with a mucinous lesion.

For preoperative diagnosis, positron emission tomography (PET) scanning has been used to diagnose a tumor's malignancy. We began to use PET scans from 2003. In the beginning, we did the scans only for selected cases. The examination has now been routinely performed since 2010. Therefore, PET scans were not available for all cases in the present cohort, but only for 57 cases. Just for information, the N-H classification correlated with the SUV-max of the PET scan (R=0.577, Supplement Figure 3). However, a PET scan can be affected not only by the tumor's malignancy, but also by its size and tissue density. In small tumors, there can often be false-negative tumors based on the SUV-max value (as a reference, see also Supplement Figure 3). This means that, if SUV-max is high, a lobectomy (or standard operation) is needed, but if the SUV-max is low, we cannot say that the tumor is non-invasive carcinoma. A low SUV-max can include also, for example, minimally invasive adenocarcinoma. Unfortunately, to determine whether a wedge resection is indicated, diagnosis by PET scan cannot be considered sufficient.

The outcomes of Group I-II were acceptable even after the limited resection procedure, with acceptable disease-free survival in the Group I patients. However, 1 patient classified as Group II had margin recurrence. A detailed retrospective examination of the sample used for margin cytology showed only a few small carcinoma cells on the slide. Therefore, the difference between Group I and Group II was not caused by a difference in malignancy, but rather a limitation of the margin scanning procedure. Fortunately, that patient underwent a re-operation 4.5 years after the first operation and has since shown a good outcome.

Use of cytological findings along with the N-H classification for determining operation extent is effective for patients with small pulmonary adenocarcinomas.

This study was conducted at a single institute, and the number of subjects, especially in Group V, was inadequate for definitive conclusions. In addition, the N-H classification is a qualitative system, though we are attempting to improve the scoring system for quantitation.

In our institute, we have used video-assisted thoracic surgery (VATS) since 2000. First, we used VATS technique only for selected cases with a small thoracotomy. Since 2010, we do complete VATS for patients with a small tumor. Because of the diverse indication for VATS and the gradual change of the procedure, it was not mentioned in this article.

Furthermore, the same samples were diagnosed and scored at multiple institutes, with the results compared.