Background: Gastric cancer (GC) is one of the main mortality cause worldwide. Previously, we found Forkhead box protein (FOXM1) or Urokinase-type plasminogen activator (PLAU) are independent prognostic markers of GC. This study aims to explore the combining prognostic efficacy and the potential insights underlying additive effect of FOXM1 to PLAU in GC progression through in-silico analyses.

Results: FOXM1 and PLAU are overexpressed in 17/33 cancer types including GC. Kaplan-Meier analyses indicate that the FOXM1+PLAU+ subgroup have the worst prognosis, while FOXM1-PLAU- subgroup have the best survival. Bioinformatics analysis indicated that FOXM1+PLAU+ associated genes are enriched in TGF-beta, DNA repair and drug resistance signaling pathways; FOXM1 and PLAU expression are negatively correlated with tumor immune infiltration. Genomic and proteomic differences between FOXM1+PLAU+ and FOXM1-PLAU- groups were presented. Data mining from LINCs suggested several chemicals or drugs that could target the gene expression pattern of FOXM1+PLAU+ patients.

Conclusion: FOXM1+PLAU+ can serve as effective prognostic biomarkers and potential therapeutic targets for GC. Due to the additive effect of these two genes, screening for drugs or chemicals that targeting the expression patterns PLAU+FOXM1+ subgroup may exert important clinical impact on GC management.

Although the incidence of gastric cancer decreased dramatically in recent years, it remains one of the main cause of mortality worldwide[1]. To some extent, the screening and therapy for the early stage gastric cancer patients is mature and effective, however, the survival of the late stage patients with distal metastasis is still very poor[2]. FOXM1, also named box protein M1, is known as a member of Forkhead box (Fox) superfamily of transcription factor that regulate the cell cycle, DNA synthesis and cell proliferation[3-5]. FOXM1 controls the transition of G1/S and G2/M phase by regulating the expression of AuroB kinase, CDC25B and P27[6-8]. FOXM1 triggers the DNA damage repair signaling by persistence activation of ATM-CHK2 signal axis and related to the MELK- mediates the oncogenic activation[9, 10]. FOXM1 is highly expressed in many MST (malignant solid tumors) such as non-small cell lung cancer[11], colorectal cancer[12], esophageal cancer[13, 14], gallbladder cancer[15], gastric cancer[16], glioblastoma[17, 18] and hepatocellular carcinoma[19, 20]. Most studies indicated the high expression of FOXM1 is related to the poor prognosis of patients of MST[21, 22]. FOXM1 plays an important role in the development of embryo, adult tissue homeostasis and tumorigenesis and metastasis, which including the process of cell senescence, cell migration and invasion[23]. Siomycin A, a FOXM1 inhibitor, downregulate the level of FOXM1in the metastatic melanoma cell lines and induce cell apoptosis[24]. Down regulation of FOXM1 expression the proliferation and migration of hepatocellular carcinoma and renal cancer[25-27]. It was also reported that FOXM1 could promote gastric cancer cell migration and invasion[28]. FOXM1 signaling is one of the key pathways in ovarian cancer development and targeting FOXM1 is an effective therapeutic strategy[29, 30]. Moreover, the overexpression of FOXM1 could induce the apoptosis and cell senescence, which was related to the ROS reaction and chemo-resistance[31]. Knockdown of the FoxM1 enhances the sensitivity of ovarian cancer and gastric cancer cells to cisplatin[32, 33].

PLAU, also named Urokinase-type plasminogen activator (uPA). Unlike other Urokinases, PLAU does not possess the kinase activity; it performs as a protease, which belongs to the serine peptidase of S1 of Clan PA[34]. PLAU participate the transition of plasminogen to plasmin, and proteolyzes the proteins related to the ECM remodeling and activates growth factors[35]. PLAU activates the MAPK, Jak-Stat signal pathway and focal adhesion kinase systems by its direct binding to the uPAR (Urokinase- plasminogen activator receptor) or indirectly by activation of plasmin which releases growth factors from ECM[36]. The status of PLAU is also the biomarker of prognostic and predictive factor in breast cancer and non-small cell lung cancer[37, 38] and synthetic antibody against PLAU has been demonstrated the inhibition ability to the cancer progression[39]. Using chicken embryo system, researchers demonstrated that PLAU play an important role in the early process of tumor cell dissemination which is the initial deliberation of cancer cell from the primary sites[40]. And in the mice PLAU or plasminogen deficient model, the distal metastasis such as lung and lymph node metastasis was decreased while no effect on the growth of tumor[41, 42]. Wang et al. showed that inhibition of PLAU expression could suppress the migratory and invasive ability of cervical cancer cells through down regulating MMP2 expression[43].

Previously, we found that overexpression of FOXM1 and PLAU were associated with gastric cancer progression and poor prognosis[44]. In the current study, several bioinformatics approaches were employed to explore the molecular mechanisms underlying FOXM1+/PLAU+ related malignant phenotype and potential therapeutic options.

Gastric cancer gene expression profiling dataset for Kaplan-Meier analyses were set up using raw data obtained from GEO (http://www.ncbi.nlm.nih.gov/geo/)[45]. Briefly, keywords “gastric”, “cancer”, “GPL96”, and “GPL570” were utilized. Only publications with raw data, survival information and at least 30 patients within the dataset were included. Affymetrix HG-U133 Plus 2.0 (GPL570) and HG-U133A (GPL96) gene chips were chosen because their probe sets are overlapped. By utilizing the Affy Bioconductor library in R (http://www.r-project.org), raw CEL files were MAS5 normalized. Finally, to set the average expression on each chip to 1000 to reduce batch effects, a second scaling normalization was performed as described[46, 47]. This merged dataset was used in survival analyses. Computation of differentially expressed genes and two class Gene Set Enrichment Analysis (GSEA)[48] were performed using data from Gene Expression Omnibus (GEO, accession number:GSE15459[49]). Gene-Drug interaction data was downloaded from LINCs dataset[50]. All other data are from The Cancer Genome Atlas (TCGA: http://cancergenome.nih.gov/) and GEO (accession no.GSE27342[51]). Differential expression analyses and immune infiltration analysis were using TIMER[52]. Gene network visualization was presented through GeneMAINA[53]. 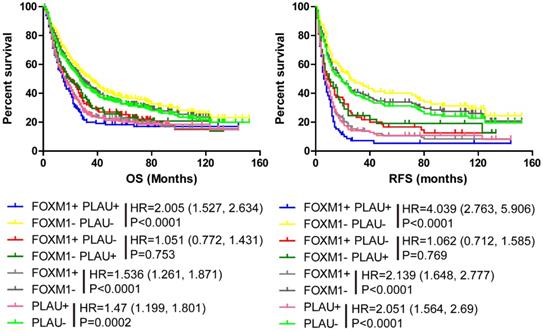 As mentioned, FOXM1 and PLAU are indicators of poor prognosis with shorter OS and RFS time in the gastric cancer, and results from microarray also indicated FOXM1+PLAU+ related genes are enriched in TGF-beta, DNA repair, MAPK and drug resistance signaling pathways. To search for the potential therapeutic drugs or chemicals targeting FOXM1+PLAU+ related molecular patterns, LINCs dataset was explored. As is shown in Supplementary Figure 7 and Supplementary Table 6, CDK inhibitors, mTOR inhibitors, JAK2 inhibitors, PI3K inhibitor, IKK inhibitor and IGF-1R inhibitors etc. could potentially reversed the gene expression patterns of FOXM1+PLAU+ or FOXM1-PLAU- groups. As a conclusion, the predicted inhibitors which could reverse the gene expression pattern in the different FOXM1/PLAU status groups may serve as potential therapeutic options in the gastric cancer in the future. 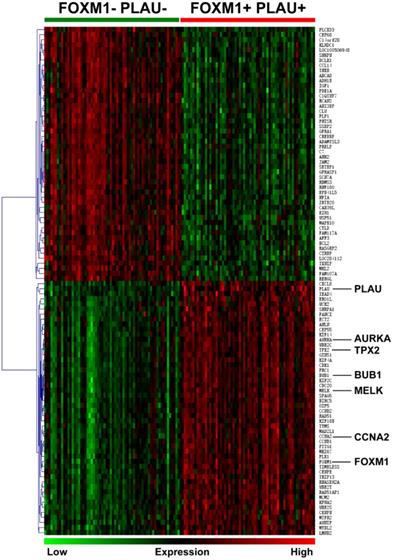 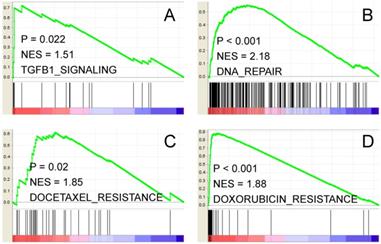 Association between FOXM1, PLAU and immune cell infiltration. Correlation r or purity adjusted r value and p value are presented in the figure. The blue line is the fitting curve.

Gastric cancer remains the third cause of mortality in the worldwide[1]. Because of the high recurrence rate and poor prognosis of GC, there still one half of the patients suffer surgery but with no changes in long term survival[55]. Therefore, more efforts should be encouraged to develop individualized therapies. Previously, we found that overexpression of FOXM1 and PLAU were associated with gastric cancer progression and poor prognosis. In the current study, several bioinformatics approaches are employed to explore the molecular mechanisms underlying FOXM1+/PLAU+ related malignant phenotype and potential therapeutic options.

We show that FOXM1 and PLAU are overexpressed in 17 cancer types including GC and the expression of these two genes are positively correlated with each other. Kaplan-Meier curve analysis using pooled gastric cancer dataset indicate that FOXM1+PLAU+ subgroup predict the worst prognosis, while FOXM1-PLAU- subgroup have the best OS and RFS. Genes related with PLAU+FOXM1+ subgroup play crucial roles in various signaling pathways, including cell cycle, DNA repair pathway, TGF-beta pathway and chromosome remodeling. FOXM1 is negatively correlated with infiltration of all six types of immune cells while PLAU is negatively correlated with B cells and CD4+ T cells; positively correlated with neutrophil and dendritic cells. Gene network analysis showed that FOXM1 was involved in RAS signaling pathway while PLAU was associated with blood coagulation, wound healing and cell-matrix adhesion. Moreover, literature mining indicates that FOXM1 could upregulated PLAUR expression[12]. If PLAU and FOXM1 were co-overexpressed, then the PLAU-PLAUR pathway would be over-activated. These could account for PLAU+FOXM1+ associated poor prognosis of GC patients. Furthermore, genomic and proteomic differences between FOXM1+PLAU+ and FOXM1-PLAU- groups were also computed using TCGA GC data. Several mutations and proteins of key signaling pathways are enriched or overexpressed in FOXM1+PLAU+ group.

Besides the well-known signaling pathways that FOXM1 and PLAU involved in, our results also indicate that FOXM1 and PLAU may participate in the JAK-STAT3, DNA repair and drug resistance (Docetaxel and Doxorubicin) in GC. JAK2-STAT3 axis activation is the feature in many solid tumor and play an important role in cell proliferation and microenvironment changed[56, 57]. Drugs targeting on JAK2-STAT3 pathway in autoimmune disease have been shown in phase 3 trial, but no response was seen in solid tumor even in the phase 1 trial[58, 59]. Dysfunction of DNA repair pathway cause the accumulating DNA damage, and induce the tumorigenesis. And therefore more effort has been make on the anticancer drugs which focused on the DNA repair[60-62].

Subsequently, we analyzed the potential inhibitors that could potentially reverse the gene expression patterns of the FOXM1+/PLAU+ subgroup and FOXM1-/PLAU- subgroup. As shown in Figure 3, inhibitors targeting cell cycle (CDK), PI3K-AKT, NF-κB, JAK2, TGF and mTOR would be effective as suggested by LINCs. Among these inhibitors, BMS-754807 is a reversible and potent inhibitor of insulin-like growth factor 1 receptor (IGF-1) and in vivo experiments show that combination with BMS-754807 and cetuximab improve the outcome of BMS-754807 single treatment[63]. TPCA-1 was reported as direct inhibitor of STAT3 and NF-κB, and is effective in a subgroup of NSCLC[64]. The potential therapy capacity of FOXM1 and PLAU is not limited in the gastric cancer, also suitable for the NSCLC.

Drug resistance is an important problem influence the prognosis of cancer. Suppression of FOXM1 and PLAU could sensitize the pancreatic cancer cell death by inducing DNA damage[65]. Our results also indicated that the genes related to the docetaxel or doxorubicin resistance were overexpressed in FOXM1+/PLAU+ subgroup. Therefore, those predicted inhibitors which could reverse the gene expression patterns of the FOXM1+PLAU+ subgroup may worth exploring as new therapeutic options for gastric cancer.

In summary, PLAU+FOXM1+ could serve as effective prognostic biomarkers and potential therapeutic targets for GC. Due to the additive effect of these two genes, screening for drugs or chemicals that targeting the expression patterns PLAU+FOXM1+ subgroup may exert important clinical impact on GC management. Nevertheless, this study is an in-silico study using multiple computational and bioinformatics approaches, wet lab experiments should performed to further confirm our findings.

15. Wang R, Song Y, Xu X, Wu Q, Liu C. The expression of Nek7, FoxM1, and Plk1 in gallbladder cancer and their relationships to clinicopathologic features and survival. Clinical & translational oncology: official publication of the Federation of Spanish Oncology Societies and of the National Cancer Institute of Mexico. 2013;15:626-32

54. Y. B, Y. H. Controlling the false discovery rate: a practical and powerful approach to multiple testing. Journal of the Royal Statistical Society Series B (Methodological). 1995;57:289-300