Malignant bladder carcinomas are the most common tumors in urinary systems. Bladder cancer concerns approximately 549,393 new cases each year worldwide and its incidence is constantly increasing [1, 2]. At time of diagnosis, non-muscle invasive bladder cancer (NMIBC) represents the majority of cases, accounting for 70% [1-9]. Early diagnosis and treatment of cancerous or precancerous lesions is thought to be important for reducing the risk of relapse and improving the prognosis of NMIBC [10]. However, the differentiation of chronic urocystitis from NMIBC can be particularly difficult, especially after previous treatment with attenuated mycobacteria (Bacillus Calmette-Guèrin) for deliberate induction of an inflammatory reaction [6, 8]. This treatment is often a primary treatment option for NMIBC aside from early cystectomy [6, 8]. Therefore, correct discrimination of urocystitis from NMIBC calls for a panel of biomarkers with both high sensitivity and high specificity.

Recently, several reports have highlighted the role of long non-coding RNAs (lncRNAs) as urine-based biomarkers for diagnosis of bladder cancer [1, 10-22]. Long non-coding RNAs are transcripts longer than 200 nucleotides that are not translated into protein [23]. LncRNAs do not contain open reading frames, but have conservative secondary structures. LncRNAs could interact with DNA, RNA or proteins as molecular sponges, scaffolds and activators to play important regulatory roles in a variety of biological processes [11]. For example, Wang and collaborators [13] determined that high expression of UCA1 (Urothelial cancer associated 1) in urine sediments allows detection of high-grade superficial bladder tumors. Another study [14] showed that overexpression of several lncRNAs, such as HOTAIR, HOX-AS-2, MALAT1, HYMAI, LINC00477, LOC100506688 and OTX2-AS1, has been found in urine exosomes of high-grade MIBC patients. Several other studies [10, 12] also proposed various panels of lncRNAs as liquid biopsy biomarkers to discriminate bladder cancer patients from healthy controls.

Encouraged by these successes, in this study, we attempted to discover and evaluate the prediction power of a panel of lncRNAs biomarkers to discriminate bladder cancer from urocystitis. We chose totally sixteen lncRNAs as our candidate biomarkers, as suggested by previous studies [1, 10-22]. We conducted a study of 140 NMIBC patients and 140 urocystitis patients. We found that the expression profiles of sixteen cell-free lncRNAs evaluated in urine were significantly different between NMIBC patients and urocystitis patients. Among these biomarkers, we chose four lncRNAs, namely UCA1-201, HOTAIR, HYMA1 and MALAT1, as our panel of lncRNA biomarkers for further investigation, due to their high value of area under curve (AUC) of the receiver-operating characteristic (ROC) curve. We found that this panel discriminated the NMIBC patients from urocystitis patients with high sensitivity (95.7%) and high specificity (94.3%). To further evaluate the clinical performance of our method, we then applied this cell-free, urinary lncRNA panel to an independent clinic study that included 60 NMIBC patients and 60 urocystitis patients. The specificity of our method remained as high as 96.7%: only 2 out of 60 urocystitis patients scored as cancer positive. The sensitivity of our method was 93.3%: 56 out of 60 cancer patients scored as cancer positive. These studies confirmed that the lncRNA panel could serve as a robust, accurate, and non-invasive method for bladder cancer detection. To our best knowledge, our study represents the first attempt of using cell-free urinary lncRNA biomarkers for non-invasive differentiation of bladder cancer from urocystitis.

We were approved for this study by the Institutional Review Board of Shandong Provincial Hospital Affiliated to Shandong University (Jinan, China) and conducted this study in accordance with the principles of Declaration of Helsinki. For all research participants, we obtained written-informed consent forms. In the cohort for biomarker discovery phase (Table 1), a total of 140 NMIBC patients, and 140 people that were diagnosed as severe urocystitis with reactive urothelial atypia (RUA) were recruited in the period of April 19th, 2015 and January 17th, 2018. The following criteria were used to include or exclude research participants: 1) inclusion criteria: confirmed bladder cancer that was diagnosed via cytologic examination; and 2) exclusion criteria: NMIBC patients that had chemotherapy/radiotherapy within 1 month, or NMIBC patients that were diagnosed of other malignancies within five years prior to urine collection.

Demographic Information of All Subjects Used in This Study.

Urine samples were collected on the day before treatment and kept on ice during collection. To remove cells and debris, urine samples were centrifuged at 1,500 g for 10 minutes and 13,800 g for 15 minutes at 4oC by following a previously published protocol [10]. We followed a protocol that was previously published for extracting cell-free, urinary lncRNA [10]. In brief, total RNA was isolated from 400 μL urine by using the miRNeasy Mini Kit (Qiagen) and following the manufacturer's instructions. We used NanoDrop spectrophotometer to measure the concentration of isolated RNA. Reverse transcription of urinary lncRNA was conducted by using the PrimeScript™ RT reagent kit (Takara, Dalian, Liaoning), in which the 20 µL RT volume contained 1 μg of template RNA, 4 μL of 5 × PrimeScript Buffer, 1 μL of PrimeScript RT Enzyme Mix I, 1 μL of Oligo dT Primer and RNase - free dH2O. The mixture was briefly centrifuged and incubated at 37°C for 30 minutes, followed by incubation at 85°C for 5 seconds and 4°C for 60 minutes. The quantitative polymerase chain reaction was conducted in a 25 μL reaction system, which contained 12.5 μL of SYBR® Premix Ex Taq™, 0.5 μL of ROX Reference Dye α, 1 μL of forward primer (10 μmol/L), 1 μL of reverse primer, 8 μL of RNas - free dH2O and 2 μL of cDNA on a CFX-96 real-time PCR System using the SYBR® Premix Ex Taq™ (Takara, Dalian, Liaoning). All reactions were performed in triplicate. GAPDH was used as an internal control. Raw Ct data was normalized by subtracting GAPDH Ct values from the biomarker Ct values to generate ΔCt. The relative gene expression were calculated by following the 2-ΔCT method as reported previously [24], where relative gene expression in a urine sample = 2 ^ (- ΔCt) and multiplying by 1000.

Boxplot of relative lncRNA expression level was conducted by using MedCalc software (MedCalc Software bv, Ostend, Belgium). Two-sided p-value was calculated when comparing the expression level between patient group and control group. A p-value smaller than 0.05 was chosen as statistically significant. For each biomarker, we performed receiver operating characteristic (ROC) analysis, followed by calculating the area under the curve (AUC) using MedCalc software. Based on the AUC value of each biomarker, we could decide whether or not a biomarker was discriminative in separating NMIBC patients and urocystitis patients. We chose the biomarkers that had AUC values larger than 0.70 to develop a predictive model. We selected decision tree algorithm as our classifier and applied 10-fold cross-validations to avoid overfitting. The classification was conducted by using the data collected in the biomarker discovery phase. Python scikit-learn package was used for the computational analysis. The classifier was then used for the data collected in the validation phase to predict whether or not a sample was from NMIBC patients.

Comparison of cell-free expression levels of sixteen candidate lncRNA biomarkers in urine between NMIBC group (blue) and urocystitis group (red). The p-value from t-test analysis was calculated for each comparison. We considered p<0.05 as statistically significant. 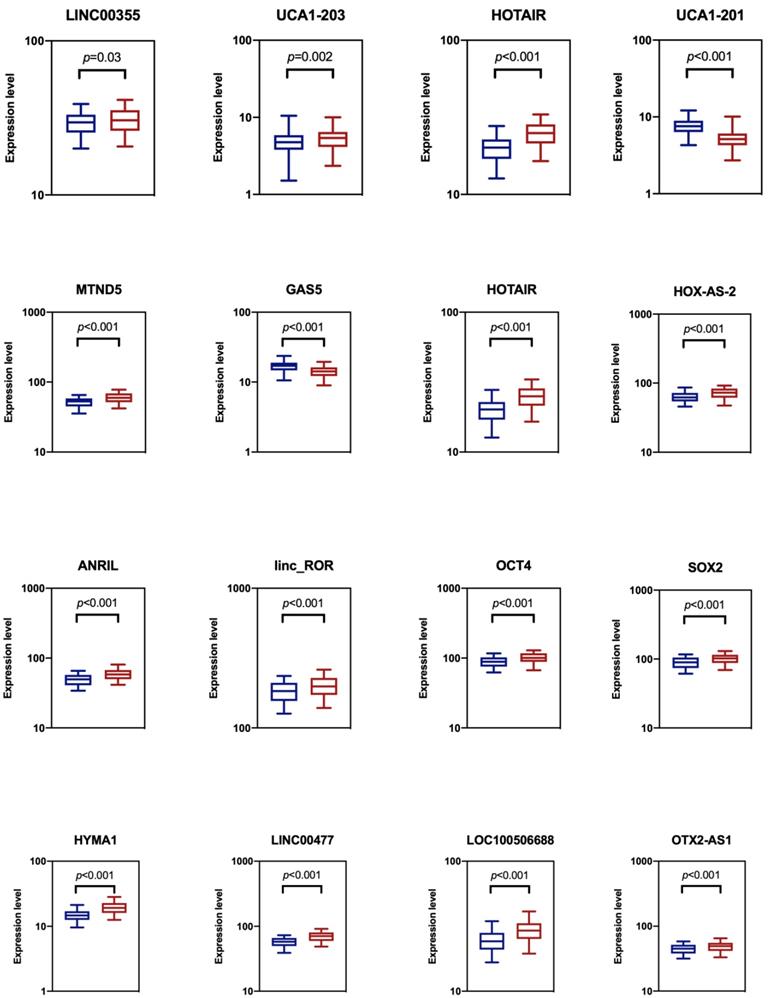 ROC curves of single lncRNA biomarker used to differentiate NMIBC and urocystitis in the training datasets. 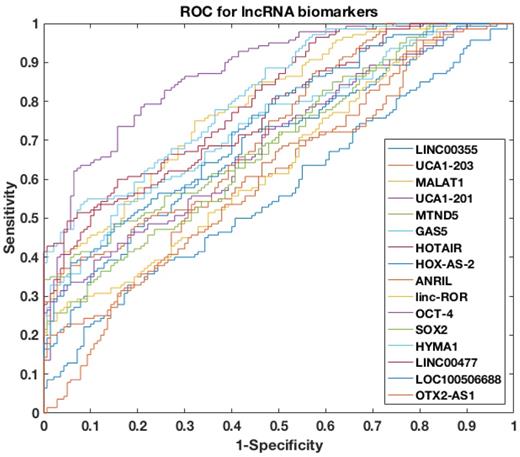 To further assess the power of differentiating NMIBC patients from urocystitis patients, the receiver operating characteristic (ROC) curve was evaluated for each candidate biomarker, followed by area under curve (AUC) calculation (Figure 2). Among the sixteen candidate biomarkers, nine biomarkers (i.e., UCA1-201, HOTAIR, HYMA1, MALAT1, LINC00477, LOC100506688, GAS5, ANRIL, and MTND5) demonstrated AUC values higher than 0.70 (i.e., an AUC value that normally suggests decent separation of clinical positives from negatives), while the other seven biomarkers had AUC values below 0.70. The AUC of top four biomarkers, i.e., UCA1-201, HOTAIR, HYMA1 and MALAT1, were even higher than 0.80, suggesting superior diagnostic performance in differentiating NMIBC and urocystitis.

To further explore the potential of using cell-free urinary lncRNAs as biomarkers to differentiate NMIBC and urocystitis, we then constructed a four-lncRNA panel that included UCA1-201, HOTAIR, HYMA1 and MALAT1. We applied a machine-learning model to predict NMIBC occurrence using the four-lncRNA panel. The input of this predictive model was the cell-free expression levels of the four lncRNAs, paired with the phenotype data (i.e., NMIBC or urocystitis). Totally 280 datasets were retrieved in the training phase, which was then used to train the model. Decision-tree algorithm was chosen as the classifier and python scikit-learn package was adopted for computation, which automatically adjusted the nodes and connections of the decision tree to optimize the fitting [25]. The predictive dramatically improved the discriminative power, as the AUC of the ROC curve reached 0.95.

Confusion matrix of applying the four-lncRNA panel to differentiate NMIBC and urocystitis in the validation datasets. 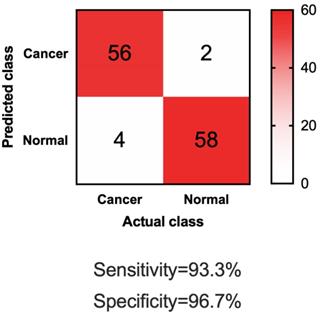 Primers Used in This Study.

We also would like to pinpoint a few limitations of this study. As mentioned in the paragraph above, in this study we aimed at discovering and validating biomarkers of bladder tumors, but not focused on uncovering the molecular insights into the mechanisms of cell-free lncRNA expression. We do want to point out that, as suggested by Raposo et al. [26], extracellular vesicles, such as exosomes, microvesicles and apoptotic bodies, can contribute to the remarkable stability of cell-free lncRNAs. We will design further studies to analyze the origin and protection mechanisms of cell-free lncRNAs in urine samples. Also, our study represented a single-center research. Larger number of independent cohorts from multi-centers are needed to validate our current findings. Finally, we will continue to improve the specificity of the constructed urinary lncRNA panel for bladder cancer diagnosis, especially for early-stage patients. We will also need to evaluate the discriminatory power of our lncRNA panel between bladder cancer patients and other patients with non-cancerous diseases (e.g., urinary tract infection).

In summary, we concluded that a panel of four lncRNA biomarkers could be used to differentiate bladder cancer from urocystitis, with high sensitivity and high specificity. This pave the way for further predictive study followed by pivotal clinical validation.

22. Leiblich A. Recent developments in the search for urinary biomarkers in bladder cancer. Current urology reports. 2017;18:100 -