Lung cancer continues to be the deadliest type of malignant tumor worldwide [1]. Recently, great progress has been made in understanding the tumor immune microenvironment and gives rise to the development of immunotherapy. Monoclonal antibodies against programmed death 1 (PD1)/ programmed death-ligand 1 (PD-L1) were shown to possess remarkable antitumor activity against several cancers, including non-small cell lung cancer (NSCLC). The efficacy of PD1/PD-L1 inhibitors, such as nivolumab, pembrolizumab, or atezolizumab, has been shown to be superior to that of docetaxel in a second-line setting for patients with advanced NSCLC [2-5]. Moreover, in patients with PD-L1 expression tumor proportion score (TPS) ≥ 50%, first-line setting of pembrolizumab has showed superior effects as compared to platinum-doublet therapy[6]. Therefore, detection of PD-L1 expression is important to guide the correct use of immunotherapy in clinical settings.

The availability of adequate amounts of tumor tissue is a challenge for PD-L1 staining in clinical settings [7], similar to testing for mutations in cancer driver genes. Currently, PD-L1 testing is only certified for tissue core biopsies. Since the majority of NSCLC patients are initially diagnosed at an advanced stage, a small biopsy or cytological tumor samples are typically obtained for histological typing and biomarker evaluation, which is a barrier to PD-L1 testing [8]. Regarding intratumor heterogeneity[9, 10], PD-L1 testing of cytological cell block specimens should be performed with caution. To date, the evidence of PD-L1 on cell block is scant; therefore, the feasibility of cell block remains controversial. In this study, we retrospectively collected paired surgical and cytological cell block samples in order to investigate the feasibility of performing PD-L1 staining on cell blocks from NSCLC patients and investigate the accuracy of this approach for determining PD-L1 status.

Patients with operable NSCLC which underwent primary tumor biopsies and surgical resection were collected, at the Shanghai Pulmonary Hospital, Tongji University from January 2016 to February 2017. Patients who have not received systemic therapy or radiation were enrolled. Paired cytological cell blocks and surgical samples was collected. 4-μm sections were obtained from paired FFPE tissue and cell blocks. This study was approved by the ethic committee of Shanghai Pulmonary Hospital, Tongji University and consents were obtained from each patient.

The procedure for cytological cell block processing was similar as described previously [11, 12]. Simply, samples were placed into ThinPrep (HOLOGIC Gen-Probe, San Diego, CA, USA) cytology test (TCT) preservation solution. Samples were centrifuged at speed of 2000rpm for 5 minutes. Supernatant was removed and the precipitant was collected. The sediment was packaged by warm agarose gel and had routinely dehydration before packaging in paraffin wax. Then sediment was processed to be embedding and sliced into 4-μm for further staining. Slides for PD-L1 and H&E staining were performed on serial sections from the same specimen. H&E stained slide was used for counting the number of tumor cell on cell block, which was manually counted by two pathologists (Z.D., C.W.) on each cell block via light microscope at 100 magnification. 10 tumor cells were considered as a cluster, then pathologists counted how many clusters contained in each slide of cell block slide.

IHC staining was evaluated independently by 2 pathologists who were blinded to clinical data. If disagreement happened, the third pathologist reviewed the slide and then had a discuss to reach a consensus. TPS was used to categorize the specimens based on multiple cutoff values (1% and 50%).

SPSS software system (version 21.0, SPSS, Inc., Chicago, IL) was used to perform the statistical analysis. The difference between categorical factors and PD-L1 expression, and difference of PD-L1 positive rate in cell block/resected tumor pairs were assessed by chi-square test or Fisher's exact test. The concordance of PD-L1 expression between cell blocks and matching resected tumors were calculated by Cohen's κ coefficient of agreement. Cohen's κ coefficient: the κ value ranged from -1 to 1, with -1 indicating perfect disagreement and 1 indicating perfect agreement. The strength of this agreement is defined as: poor if κ < 0.00; slight if κ was within 0.00 and 0.20; fair if κ was within 0.21 and 0.40; moderate if κ was within 0.41 and 0.60; substantial if κ was within 0.61 and 0.80; and almost perfect if κ was within 0.81 and 1.00. For the subgroup analysis based on tumor cell count, tumor cell count of cell block was used to categorize the cases into subgroups. The alpha for all tests was set at 0.05, therefore, the result was considered statistically significant if p < 0.05. All the tests were two-sided.

Relationship between PD-L1 staining of cell blocks and pathological characteristics

PD-L1 scoring was performed with two assays (28-8 and SP142). Predominantly membranous staining was observed among 112 tumor/cell block pairs, similar to IHC staining of PD-L1 in previous studies. Representative section of PD-L1 expressing tumor detected by two assays were shown in Figure 1. Two cutoffs (1%, 50%) were used to categorize PD-L1 expression into positive and negative groups. The frequency of PD-L1 expression was shown in the Figure 2.

Based on staining with the PD-L1 28-8 assay, the overall prevalence of PD-L1 expression in tumor cells of the cell block cohort was 67.9% and 20.5%, with cutoffs at 1% and 50% respectively. The rate of PD-L1 positivity was 78.6% and 27.7% in matching surgical sections with cutoffs at 1% and 50%, respectively. PD-L1 expression on surgical sections exhibited a significantly higher frequency with a TPS score≥1%, and a slightly higher frequency with TPS score ≥50% than that on cell blocks.

Based on staining with the SP142 assay, PD-L1 expression was detected in 25.0% and 14.3% of the cases with a TPS of at least 1% and 50% in the cell block cohort. PD-L1 was positive in 58.9% and 28.6% of the cases in the paired resected tumor cohort. The rates of PD-L1 expression with all TPS cutoffs were significantly higher in cytology cell block specimens as compared to surgical specimens (all p<0.001).

Comparison of PD-L1 between surgical and cytological cell block samples

Expression of PD-L1 in cell blocks displayed fair to substantial concordance at all TPS cutoff values when compared with matching resected tumors (Figure 3). A representative section of one PD-L1 TPS concordant tumor from cell block/resected tumor pairs are shown in Figure 4.

Since the range of tumor cells count(10-1,500) in our study was huge, we further investigated the impact of tumor cells number contained on PD-L1 expression in cell blocks. Subgroup analysis, categorized by division unit, of 50 tumor cells was made. As shown in the Fig. S1, fluctuation of the concordance rate and Cohen 𝛋 value increased as the number of tumor cells increased. Cutoff value for tumor cells were identified as the nearest relative tumor cell number of the fitted curve of κ when κ equaled to 0.80(almost perfect agreement). Therefore, the cutoff value for 28-8 and SP142 was 400 and 500 respectively. For PD-L1 expression measured by staining with 28-8, 96.0% cases were concordant with the TPS cutoff at 1% and 50%, and Cohen 𝛋 values were 0.915 and 0.865 when the tumor cell count reached 400. In addition to concordance, specificity was 100% at all cutoff values. The sensitivity was 100.0% and 80.0% at cutoff value of 1%, 50% respectively. Based on PD-L1 expression as measured by staining with SP142, and 100.0% cases were concordant with Cohen 𝛋 value of 1.000 at cutoff of 50%, when the number of tumor cells reached 500. High specificity (100.0%) and sensitivity (100.0%) was also observed. However, PD-L1 expression as measured by staining with SP142 only showed moderate concordance with 1% cutoff (𝛋:0.468). 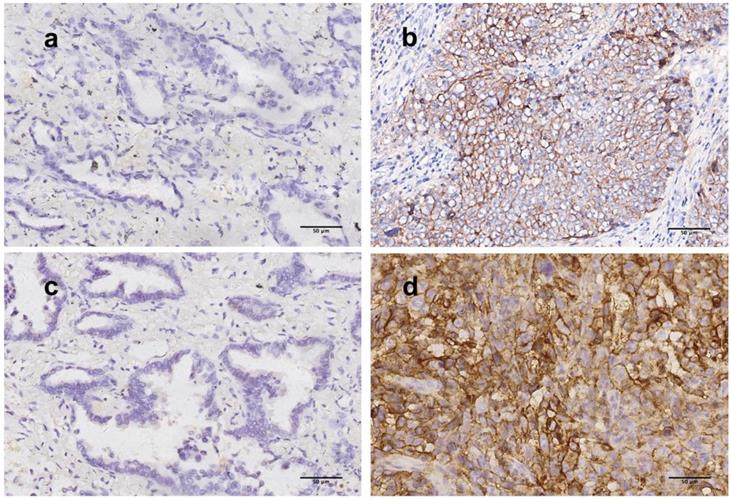 Patient characteristics of the enrolled 112 patients. 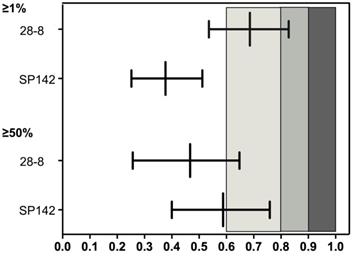 This study found that expression of PD-L1 in cytology blocks was inconsistent with resected tumor samples. PD-L1 detection by two companion diagnostic PD-L1 assays showed fair to substantial concordance between cell block/resected tumor pairs. However, PD-L1 scores were more concordant when a greater number of tumor cells were present in the cell block. Cytology cell block specimens were more reliable than surgical resection when enough viable tumor cells were present in the cytological specimens. Therefore, cytology cell block specimens containing sufficient tumor cells could be a surrogate for PD-L1 staining in patients with NSCLC.

The majority of lung cancer patients are initially diagnosed at an advanced stage when resected tumor samples are unavailable [15, 16]. In patients with advanced lung cancer, cytological preparations such as fine needle aspiration biopsies or endobronchial ultrasound biopsy specimens are frequently used for pathological or molecular testing [17]. However, the feasibility of cytological cell blocks for PD-L1 staining are still unknown. Previous studies with limited samples size showed consistency between cytology cell blocks and matching resected tumor or biopsy samples[18-20]. However, BluePrint II study found only moderately good agreement (ICC=0.78-0.85, κ=0.6-0.85) in assessing PD-L1 status on cytological cell block materials[21]. Consistent with this result, our study included 112 pairs of pre-treated resected/cell block tumors between which a fair to substantial level of concordance (66.1% to 87.5%) was found, based on two different PD-L1 assays in various cutoffs. Thus, not all cytology cell block samples are appropriate for PD-L1 expression staining.

Beside the spatial and temporal heterogeneity of PD-L1 expression, PD-L1 staining heterogeneity might also be a reason interfere reliability. Heterogeneity of PD-L1 staining using different antibodies have been demonstrated in the present study. Pairwise comparisons showed similarity on staining from 22C3, 28-8 and SP263, but the scores from SP142 test showed a significant reduction in labeling of PD-L1 expression in tumor cells[24, 25]. This might contribute to an apparent low prevalence of PD-L1 expression stained by SP142 on cell block in our study. Previous studies also showed a lower PD-L1 positivity rate tendency in cytology specimens[19, 26], suggesting that it is still challenging to detect PD-L1 staining by cytological samples and standardization of cytological samples by tumor cell numbers might be a feasible way to perform PD-L1 staining in clinical practice. 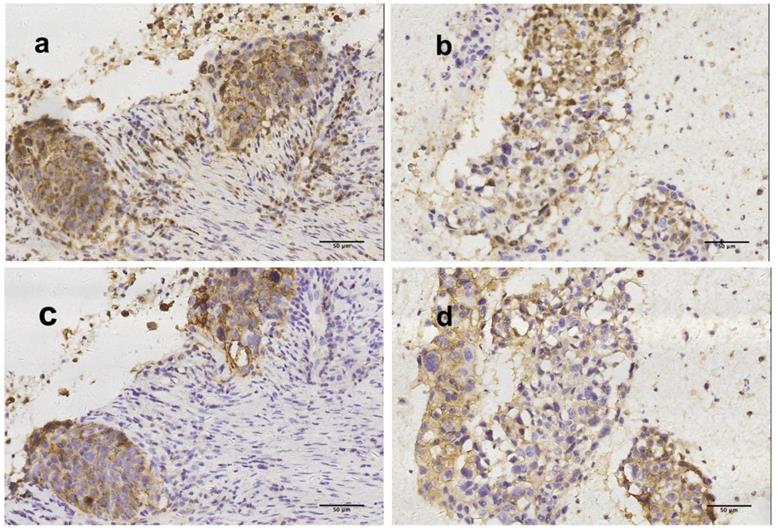 Since the tumor cells count had a huge range (10-1,500) in our study, we further investigated the impact of tumor cells number on the PD-L1 expression in cell blocks. We observed a high concordance of PD-L1 expression when cell blocks contained a greater number of viable tumor cells. Similar to our results, previous studies have also shown improved consistency of PD-L1 expression between EBUS-TBNA and biopsy specimens with increased tumor cell count[27] and cell blocks containing greater than 100 tumor cells would have satisfactory PD-L1 staining results[28]. Our study further investigated the threshold for cell block specimens to serve as a suitable surrogate for PD-L1 staining, which showed that a high rate of concordance was achieved with cutoff of tumor cells set (28-8: TC ≥400; SP142: TC ≥500). In contrast, previous studies demonstrated that cytological samples acquired through EBUS-TBNA or CT-guided fine needle biopsies contained sufficient numbers of tumor cells for histological diagnosis and molecular analysis[29, 30]. Therefore, cytological cell block with sufficient tumor cells may be a suitable surrogate for PD-L1 staining in clinical practice.

We should mention that this study had several limitations. First, since it was difficult to obtain paired cytological cell block and surgical resected tumor samples, a small size of 112 paired cases were included in this study. Second, none of the patients were treated with anti-PD1/PD-L1 inhibitors and the predictive role of PD-L1 expression in cell block is still unknown. Third, we mainly collected cell block from primary tumor. However, lymph node sample performed by EBUS/EUS was also an important source for cytological samples. Therefore, further investigation on accordance of cell block on metastatic lymph nodes is needed.

In conclusion, this study showed the feasibility of staining PD-L1 in cell blocks from NSCLC patients, which is highly consistent with resected specimens when samples contained more than 400~500 cancer cells, suggesting cytological cell blocks may be a suitable surrogate for evaluating PD-L1 expression in cases that have a sufficient number of tumor cells.