Cervical cancer is one of the most common gynecological malignancies worldwide with an estimated 570,000 cases and 311,000 deaths in 2018 [1]. The causal role of high-risk human papillomavirus (HR-HPV) in cervical intraepithelial neoplasia (CIN) has been approved by various studies [2, 3]. Especially, HPV16 is by far the most common type of carcinogenic globally, with the positivity rate of over 60% in cervical cancer patients [4]. The majority of HPV infections are transient with subclinical or asymptomatic appearance [5, 6], only a small proportion of women infected with the virus develop clinically significant pre-invasive lesions and cervical cancer. As a precancerous lesion of cervical cancer, it takes an average of 8 years for CIN to develop into cervical cancer. Therefore, it is of great significance to explore the main risk factors of CIN for blocking the occurrence of cervical cancer.

1019 participants were enrolled in the current study, including 623 participants with NC, 303 with CIN1, and 93 with CIN2/3. These participants came from the community cohort which was established during June 2014 to September 2014 and included around 20000 women in Jiexiu, Shanxi, China. The participants were considered eligible according to the following inclusion criteria: married, aged 18-65 years, Han ethnicity, and resided in Jiexiu for at least 1 year and the exclusion criteria included the following: washed vulva within 48 hours, had sexual intercourse or used drug in vagina within the last 3 days, used of antibiotics within one month. A cytobrush was used in the gynecological examination to collect exfoliative cells for TCT (Thinprep Cytologic Test) detection. Total 19593 women in the cohort completed TCT detection and 1074 women of them were diagnosed as atypical squamous cells of undetermined significance (ASC-US) and above. Among them, 44 women who refused to undergo colposcope and histopathologic examination and 11 women with cervical squamous cell carcinoma (SCC) were excluded (Fig.1). Informed consent was obtained from all individual participants and the study was approved by Shanxi Medical University Science Research Ethics Committee.

Vaginal PH value was measured using color strips with a PH range of 3.8-5.4. It was normal if PH was no more than 4.5 (PH≤4.5) and abnormal if PH>4.5. Vagina cleanness was judged strictly according to the National Clinical Laboratory Practice Guideline [18] standard: I~II was defined as normal, and III~IV as abnormal.

Detection of bacterial enzymes in vagina

In accordance with the operation instructions of the Aerobic Vaginitis (AV) / Bacterial Vaginal Disease (BV) Five Joint Test Kit (Beijing ZhongSheng JinYu Diagnosis Technology Co, Ltd., Beijing, China.), a drop of sample (about 35 ml) was added into each well. After incubating the mixture for 10 minutes at 37°C, a drop of color development solution A and B were added to the neuraminidase well and the coagulase well respectively. According to the technicians' instruction, the results were interpreted. In this study, negative results were defined as normal and positive results as abnormal. Besides, the standard quality control products in the kit were used for quality control testing of each indicator to ensure the accuracy of the experimental results. 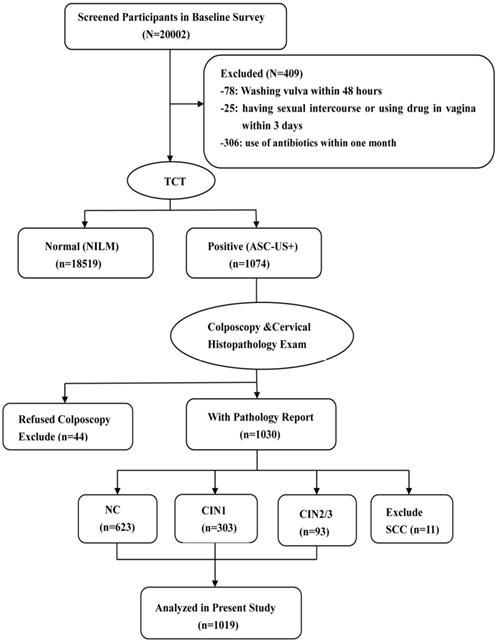 Data analyses were performed with SPSS 22.0 statistical software. Count data were examined by Chi-square and trend Chi-square tests. Multinomial logistic regression model was used to estimate odds ratio (OR). And the interaction among multiple factors was analyzed by generalized multifactor dimensionality reduction (GMDR). Statistical significance was set at α=0.05.

Our study showed that there were significant differences on occupation, passive smoking, frequency of vulva cleaning, frequency of underwear washing, washing vulva after sexual intercourse and contraception history between NC group, CIN1 group and CIN2/3 group (Table 1). There were no significant differences on age, education, marital status, age at menarche, gynecological history, numbers of pregnancy et al among the three groups (P>0.05).

Association between HPV16 and CIN

In the HPV16 negative group, H2O2, cleanness, β-glucuronidase and neuraminidase abnormities were risk factors for CIN2/3, and the abnormal rates increased with the severity of cervical lesions (Table 4). Among women with HPV16 infection, there were significant differences between the three groups in abnormal rates of H2O2, PH, cleanness, β-glucuronidase, coagulase, neuraminidase and leukocyte esterase, meanwhile, we observed that H2O2, cleanness, β-glucuronidase and neuraminidase abnormities were collective risk factors both in CIN1 and CIN2/3 group and abnormal PH and leukocyte esterase were also risk factors for CIN2/3 (Table 4). In addition, women with abnormal vaginal micro- environment factors in HPV16 positive group had a significantly higher risk on CIN than in HPV16 negative group (Table 4 and Fig.4).

* P -values for differences between groups were obtained from the chi-square test.

Eigenvalues of the related matrices

Orthogonal rotation of the factor load 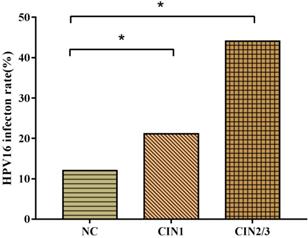 Lactobacillus, which is dominant bacteria in vagina, plays an important role in maintaining vaginal microenvironment. Some research showed that Lactobacillus could defend against pathogens and sexually transmitted infections through maintenance of a hostile PH and production of species metabolites, bacteriocin [19], while increase of PH value and decrease of H2O2 in vagina are closely related to the occurrence of vaginitis [20]. Incidence of precancerous lesions increased significantly in individuals with poor vagina cleanness than normal population [21]. In the study, we found that the abnormal rates of H2O2, PH and vagina cleanness gradually increased with the severity of cervical neoplasm, and the abnormity of H2O2, PH and vagina cleanness could increase the risk of CIN. It suggested that H2O2, PH and vagina cleanness might be used as indicators to predict the progress of CIN.

Association between vaginal micro-environment factors and CIN. *There was a statistical difference in comparison to NC group (P<0.05). 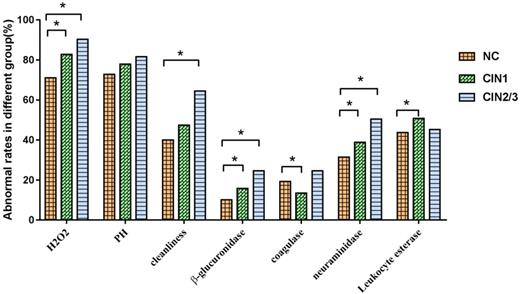 Trend of OR of vaginal micro-environment factors with the progress of cervical lesions in HPV16 negative group (A) and HPV16 positive group (B).

Interaction of vaginal micro-environment factors on CIN by GMDR analysis

In recent years, the combined detection of bacterial enzymes, such as, β-glucuronidase, coagulase, neuraminidase and leukocyte esterase, has been applied widely to evaluate the vaginal micro-ecology. Neuraminidase is closely related to Gardnerella infection [22]. Gardnerella could utilize the complement regulatory molecule CD59 to activate the epithelial p38-mitogen-activated protein kinase pathway in human epithelial cells, leading to cell death, Lactobacillus reduction and PH value elevation [23]. High expression of neuraminidase NEU3 in cancer cells leads to protection against programmed cell death, while in contrast, decreased NEU3 induces apoptosis, implying a critical role of NEU3 in the survival of cancer cells [24]. These studies indicated that vaginal neuraminidase may be a potential target for cervical cancer diagnosis and therapy. The results in our study showed that neuraminidase increased with the severity of CIN, suggesting that neuraminidase could be used as a potential biomarker in cervical lesions screening.

A recent study demonstrated that Gardnerella, Atopobium, Prevotella, Sneathia were significantly enriched, whereas Lactobacillus spp. was underrepresented in cervical cancer group as well as in CIN group [12]. However, the interaction of multiple vaginal micro-environment factors that secrete these pathogens was not defined on the occurrence of CIN. Our results from GMDR analysis showed the synergistic effect between abnormities of vagina cleanness, H2O2, β-glucuronidase and neuraminidase played an important role on CIN, and the role would be strengthened in women with HPV16 infection added with abnormities of PH and leukocyte esterase on CIN2/3. Lactic acid preferentially lyses bacteria other than Lactobacillus species [35, 36] and causes bacterial cell death by acidifying the cytosol, disrupting intracellular function [37], increasing the permeability of the cell membrane to H2O2, diacetyl et al. Gardnerella secretes neuraminidase that degrades vaginal mucus by cleaving sialic acid from the glycoproteins, increasing the risk of cervical disease [37]. A synergistic effect between Gardnerella and Prevotella was found in BV women [38]. In conclusion, our results suggested that vaginal micro-environment disorder could increase the risk of CIN, especially, the abnormality of H2O2, cleanness, β-glucuronidase and neuraminidase was of great significance to CIN regardless of HPV16 infection. There was interaction effect with abnormities of vagina cleanness, β-glucuronidase and neuraminidase on CIN regardless of HPV16 infection, particularly, with more vaginal micro-environment factors participating interaction effect in HPV16 positive group than HPV16 negative group. Although our study can't prove the causal association, we have found some valuable clues. Certainly, prospective cohort studies and experiment studies will be needed to provide powerful evidence in our future study.

We gratefully acknowledge the contribution of our coworkers involved in conducting the study and writing this article. We thank all the study participants, as well as the investigators and local healthcare workers from the Jiexiu Family Planning/Women and Children Health Service Center, for their help with the study. This study was financially supported by National Natural Science Foundation of China (81872705, 81273157, 81473060), National Health and Family Planning Commission of China (201402010) and Global Health Catalyzer Research Fund (2017).

34. Mitra A, Macintyre DA, Marchesi JR, Lee YS, Bennett PR, Kyrgiou M. The vaginal microbiota, human papillomavirus infection and cervical intraepithelial neoplasia: what do we know and where are we going next?. Microbiome. 2016;4:58-73