Correlation of triglyceride (TG)-to-high density lipoprotein cholesterol (HDL-C) ratio (TG/HDL-C) and the survival of gastric cancer (GC) remain unclear. The purpose of this study was to explore the precise effect of preoperative TG/HDL-C on clinical outcomes in GC patients. Patients with GC were enrolled from 2006 to 2014. A total of 957 individuals from a single center were divided into prospective training and retrospective test cohorts. The optimal cutoff value of TG/HDL-C was determined using X-tile software to separate the training cohort into low and high survival groups according to TG/HDL-C levels. Survival analyses were performed using Kaplan-Meier curves and a Cox proportional hazards regression model. Preoperative TG/HDL-C and clinical outcomes were obtained to determine the prognostic significance of serum lipids in the training and test cohorts. We observed that high TG and TG/HDL-C were significantly correlated with poor outcome in GC patients, and high TG/HDL-C harbored the highest area under curve to independently predict 5-year overall survival in two cohorts. Furthermore, c-index of the prognostic nomogram including TG/HDL-C was significantly higher than that without it. In summary, TG/HDL-C was an efficient and independent prognostic factor to predict 5-year case fatality of GC patients and to improve the efficacy of its prognostic nomogram.

Gastric cancer (GC) is one of the most common gastrointestinal tumors worldwide. There are more than 70% of GC patients in developing countries of Eastern Asia and China [1]. GC is the second most common tumors and third leading cause of death in 2015 according to Chinese Cancer Statistics [2]. Despite substantial development obtained in diagnosis and therapy for GC in recent years, the survival rate remains unsatisfactory because of tumor metastasis and relapses after surgery. The prognosis of GC patients may be improved with the detection of GC at its early stage [3]. Therefore, it is essential to find biomarkers to detect early stage of GC or predict clinical outcomes in individual patients with GC.

Dyslipidemia has been reported to be associated with various diseases including GC [4]. It is all known that dyslipidemia is significantly correlated with obesity, and obesity has been associated with increased risk of poor outcome in GC patients [5]. Triglyceride has served as an independent indicator for fatty acid oxidation involving tumor cell proliferation and growth [6]. However, the association between triglyceride (TG) and GC development remains unclear. Additionally, cholesterol has been reported to be involved in GC progression [7]. Conversely, high density lipoprotein cholesterol (HDL-C) presents anti-inflammatory capacity [8], which has been inversely correlated with GC risk [4]. A previous study showed that TG to HDL-C ratio (TG/HDL-C) was superior to TG as a predictor for the survival of triple negative breast cancer patients [9]. Another study of the meta-analysis reported the protective factors of total cholesterol (TC) and HDL-C for overall survival in cancer patients [10]. However, the association of preoperative TG/HDL-C with GC survival remained unclear.

In the present study, we aimed to investigate whether preoperative serum lipid levels affect GC mortality in GC patients undergoing surgical resection. Additionally, we attempted to construct a prognostic nomogram to improve the predictive capacity for GC patients according to clinicopathologic parameters and significant biomarkers.

We reviewed clinical characteristics of GC patients. All patients were divided into two cohorts. A total of 572 patients who underwent surgical resection or chemotherapy were prospectively enrolled in the training cohort between January 2010 and November 2014. The test cohort retrospectively collected 385 patients who underwent surgical resection or chemotherapy between January 2006 and December 2009. All individuals were from Nanjing First Hospital, Nanjing Medical University. The inclusion and exclusion criteria were as follows: 1) each informed consent was obtained from GC patients; 2) patients did not underwent anticancer treatment before surgery; 3) patients underwent a curative or palliative gastrectomy with standard lymphadenectomy; 4) the estimated life expectancy ≥ 3 months after surgery; 5) all patients were verified with biopsy-proven gastric adenocarcinoma. The clinicopathological findings were determined according to the 7th edition of gastric cancer tumor-node-metastasis (TNM) staging system of American Joint Committee.

All telephone or outpatient follow-ups of individuals performed as follows: occurred every 3 months for the first 2 years and then every half a year for 3 years, started after treatment and continued until January 2019 or until death. A total of 49 (5.12%) patients lost to follow-up during the follow-up period. The protocol was approved by the Medical Ethics Committee of Nanjing First Hospital, Nanjing Medical University. Informed consent for use of their information was obtained from all enrolled patients.

To explore the correlation of serum lipid levels (triglyceride [TG]; total cholesterol [TC]; low-density lipoprotein cholesterol [LDL-C]; TG to HDL-C ratio [TG/HDL-C]) and clinical outcomes of GC patients, preoperative peripheral blood, plasma and serum samples were collected from all enrolled patients at 5:00 to 8:00 am prior to surgery, and were detected within two hours after the sample collection. Preoperative serum lipid levels of blood samples were routinely tested by a blood analyzer (Beckman Coulter AU5841 [Beckman Coulter, CA, USA]). Additionally, Helicobator pylori infection was assessed by 13C-UBT.

The optimal cutoff value of TG/HDL-C

To assess the prognostic significance of preoperative lipid levels in GC patients, we performed ROC curve analyses to compare predictive capacity of TG, TC, HDL-C, LDL-C and TG/HDL-C in the training cohort (Figure 1). The results showed that the AUC value of TG/HDL-C was significantly higher than those of other serum lipid levels (all P<0.05). Subsequently, we used the X-tile to further determine the optimal threshold of TG/HDL-C (Figure 2). The results showed that the cutoff value of TG/HDL-C was 1.20 according to 5-year mortality in the training cohort patients. According to its cutoff value, the training cohorts were separated into high- and low-level groups. We then assessed the association of TG/HDL-C with clinical characteristics in the two cohorts (Table 2). In the training cohort, age (P=0.028) and depth of invasion (P<0.001) were significantly different between the high and low TG/HDL-C groups. Similar results were found when the test cohort was separated into two groups for clinical features according to the same cutoff value (Table 2).

Values are medians (interquartile range) or frequencies and percentages.

Patients received treatment for either curative or palliative purposes according to the Japanese Classification of Gastric Cancer Guidelines.

Data were analyzed using χ2 test or Mann-Whitney U test. 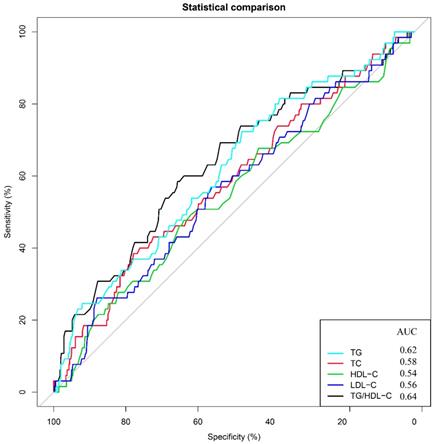 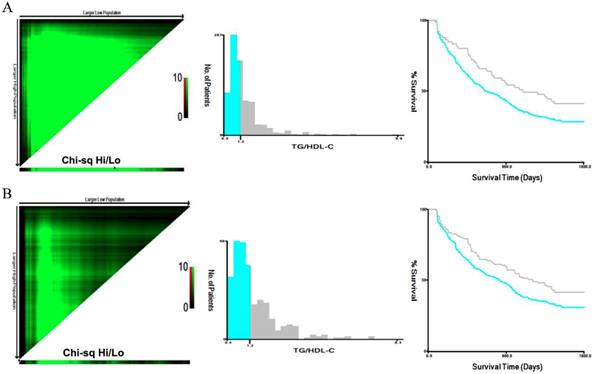 Associations between TG/HDL-C level and clinical characteristics in training and test cohort patients.

Values are medians (interquartile range) or frequencies and percentages.

Data were analyzed using χ2 test or Mann-Whitney U test.

Correlation of TG/HDL-C with survival

We performed survival analyses to investigate the correlation of clinical features with clinical outcomes in the training and test cohorts (Table 3). Our results showed that patients with patients with advanced age, tumor differentiation (moderate/poor), and advanced TNM stage, palliative treatment, and increased TG and TG/HDL-C suffered lower 5-year survival rates (all P<0.05, Table 3 and Figure 2). Furthermore, age, TNM stage, TG, and TG/HDL-C were independent predictors for 5-year mortality in both two cohorts after adjustment (Table 3).

Predictive capacity of TG/HDL-C for survival

Nomograms of patients with gastric cancer to predict 5-year overall survival. Locate the TG/HDL-C on the respective axis; draw a straight line up to the Points axis to determine how many points toward 5-year overall survival the patient receives for the TG/HDL-C; repeat this process for other variables; add the points and locate this number on the Total points axis; and draw a straight line down to find the patient's estimated risk of 5-year overall survival. The c-indexes for the training and test cohorts of patients are 0.732 (A) and 0.725 (B), respectively. Calibration curves for overall survival, which are representative of predictive accuracy, for the training (C) and the test cohorts (D). The 45-degree reference line represents a perfect match between predicted and observed values. 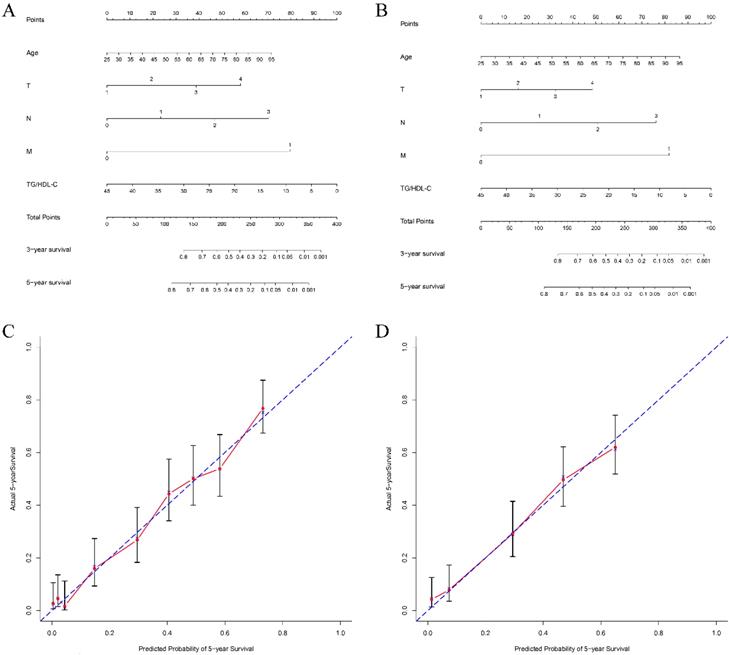 Univariate and multivariate analyses of prognostic significance of TG/HDL-C levels.

In the present study, we observed that the predictive power of TG/HDL-C was markedly superior to other serum lipids through the ROC analysis, and high TG/HDL-C was significantly independent prognostic factor for worse OS by using the X-tile to determine the optimal threshold for the TG/HDL-C in a prospective cohort. In addition, TG/HDL-C could improve the prognostic nomogram to predict the 5-year OS of GC patients, which was further confirmed in the test cohort.

As we all know, it is important to distinguish risk factors for tumor progression and strengthen the surveillance to lower the rate of recurrence and improve the quality of life for tumor patients. Up to now, the diagnosis of GC relies on clinical and physical examination, such as gastroscope and histopathology. However, the application of tumor biomarkers has not played an important role in the screening, treatment, surveillance and prevention of GC [12]. Plasma or serum reflects the biological object for tumor biomarkers as it represents physiological and pathological statuses [13]. TG and HDL-C are usually considered as the important serum lipids, which are involved in energy storage, signal transduction, and structural composition. Furthermore, several studies have reported that serum lipids were associated with clinical outcomes in many types of malignancies including GC [4, 14]. The present study enrolled the training and test cohorts of GC patients to explore the correlation between serum lipids and GC.

Hypertriglyceridemia is a common status of dyslipidemia, which is associated with cardiovascular and cerebrovascular diseases [15, 16]. Furthermore, several epidemiological studies had addressed the correlation between serum lipids and cancer risk. A large-scale cohort study suggested that high TG increased risk of rectal cancer and breast cancer [17, 18]. However, the inconsistent results of serum TG levels and GC risk have been reported from a FIESTA study [14] and a cohort study [19]. The correlation between TG and GC remains unclear. In our study, we enroll two independent studies to confirm the correlation between serum lipids and GC. We observed that patients with TG≥1.2 had a worse OS than those with TG<1.2 in both two cohorts. Furthermore, it could improve the prognostic nomogram in the prediction of the survival of GC patients. However, the detailed biological mechanisms of them require further investigation.

With regard to HDL-C, mounting evidence showed that it presents anti-oxidative and anti-inflammatory properties. A precious study showed that HDL-C inhibited LDL-C oxidative damage to prevent lipid peroxidation [20]. However, the association of HDL-C and cancer remained contradictory [4, 21]. In our study, although we observed no significant difference between HDL-C and GC, it could improve predictive significance of nomogram in the prediction of the survival of GC patients.

The present study of two cohorts aimed to further confirm the prognostic significance of TG/HDL-C in GC patients. Meanwhile, prognostic nomogram including TG/HDL-C can efficiently predict the 5-year OS of GC patients. However, the individuals in our study are from the single center, and the sample size is small. Therefore, our findings should further be verified by other large sample and prospective studies from multi-center organizations.

In conclusion, our findings have demonstrated that preoperative TG/HDL-C was an efficient and independent prognostic factor to predict 5-year case fatality of GC patients and to improve the efficacy of its prognostic nomogram. It may be considered as a readily indicator to monitor GC progression and to optimize therapeutic strategies for the GC.

The protocol was approved by the Medical Ethics Committee of Nanjing First Hospital, Nanjing Medical University and was performed in accordance with the principles of Declaration of Helsinki. Informed consent for use of their information was obtained from all enrolled patients.

ZLN and SKW participated in the design of the study and performed the statistical analysis. XQH, ZMW, GXZ, YPM and YSW collected patient information and prepared figures. HLS, XQH and ZLN conceived of the study, participated in its design and coordination, and helped draft the manuscript. All authors read and approved the final manuscript.