Conclusion: Swertiamarin treatment led to significant changes in the expression of a variety of genes that modulate cell survival, cell cycle progression, apoptosis, and invasion. Moreover, most of these genes can be clustered into pathway networks such as PI3K, JUN, STAT3, which are predicted targets of swertiamarin. Further confirmation of these targets will reveal the anti-tumor mechanisms of swertiamarin and facilitate the development of swertiamarin as a novel agent for cancer prevention and treatment.

Hepatocellular carcinoma (HCC) is a common cancer in China and becomes the fourth leading cause of cancer related deaths worldwide [1]. Despite recent developments in surgery, radiotherapy, and chemotherapy, current therapeutic approaches for HCC are still not effective. Recently, great efforts have been taken to investigate herbs with potential anti-cancer efficacy [2-4]. Nevertheless, herb extracts are usually crude mixture of many compounds, and the complexity of herbs hinders the development of anti-cancer drugs. Therefore, it is important to isolate, identify and elucidate the mechanism of action of single compound from herbs as lead candidate for cancer drug discovery.

The evaluation of anti-HCC efficacy of STM will greatly help develop novel therapeutics for HCC. To better understand the mechanism of action of STM in HCC therapy, in this study we employed microarray to screen differentially expressed genes in HepG2 hepatocellular carcinoma cells treated by STM.

HepG2 and SK-Hep-1 cells were cultured in Dulbecco's modified Eagle's Medium (DMEM) supplemented with 10% fetal bovine serum and 1% penicillin and streptomycin at 37℃ in a humid incubator with 5% CO2. STM (>95% purity) was purchased from Sigma Aldrich (St. Louis, MO, USA) and dissolved in dimethylsulfoxide (DMSO) to make stock solution at 60 mg/ml.

Male BALB/c-nu nude mice (weight 18-22 g) were purchased from Animal Center of Kunming Medical University (No. SCXK-2015-0002) and animal experiments were approved by Animal Care and Use Committee of Kunming Medical University. Each mouse received subcutaneous injection of 3×106 SK-Hep-1 cells, and when the tumor grew the mice were randomly divided into 2 groups (n=6): control group received intratumoral injection of PBS; STM group received intratumoral injection of 5 μg STM. Tumor volume was measured every week for 8 weeks, and then the mice were sacrificed and xenograft tumors were dissected to measure the weight.

HepG2 cells were seeded into 96-well plates at a density of 5,000 cells/well. After overnight incubation in a humid chamber at 37˚C, the cells were treated with DMSO or different dose of STM. Viable cells were evaluated using CCK-8 Assay kit (Dojindo, Japan) according to the manufacturer's instructions. CCK-8 solution was added to the cells in 96-well plates and the plates were incubated at 37˚C for 4 h, and then 150 μL DMSO was added to each well and the plates were incubated at room temperature for 10 min. The optical density of each well was read at 450 nm using a microplate reader (Bio-Rad, Hercules, CA, USA).

HepG2 cells were seeded onto coverslips in 6-well plates. After overnight incubation in a humid chamber at 37˚C, the cells were treated with DMSO or STM. The cells were fixed in 4% paraformaldehyde for 15 min, and then apoptotic cells were stained using TUNEL kit (Roche Diagnostic, Indianapolis, IN, USA) following the manufacturer's instructions. Apoptotic cells showed brown nuclear staining.

Transwell chamber (Costar, Cambridge, MA, USA) was used to evaluate cell invasion. The upper chambers were precoated with Matrigel overnight at 4ºC. HepG2 cells were treated with DMSO or STM, and 100 uL of the cell suspensions were seeded in the upper chambers, while the lower chambers were filled with complete medium supplemented with 10% BSA. After 24 h incubation, the cells on the upper surface of the filters were wiped by cotton swabs and the cells on the underside of the filters were fixed, stained with crystal violet and observed under a microscope. 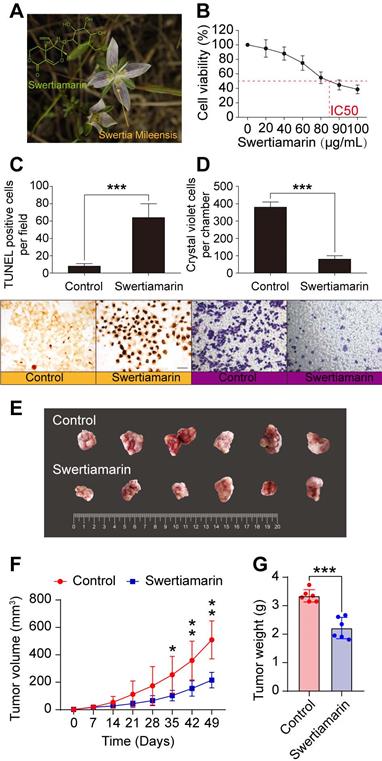 CapitalBio cRNA Amplification and Labeling Kit (CapitalBio) was used to produce fluorescent dye labeled cDNA. The labeled cDNAs were then hybridized to Agilent human mRNA Array which was designed with eight identical arrays per slide (8 x 60K format). After hybridization at 42°C overnight, the arrays were washed with 2X SSC and 0.2% SDS at 42°C for 5 min, followed by washing with 0.2X SSC and 0.2% SDS at room temperature for 5 min. The array data were analyzed for data summarization, normalization and quality control by using the GeneSpring software V13 (Agilent).

Next we performed pathway analysis to identify significant pathways of differentially expressed gene (DEGs) in accordance with KEGG (Fig. 3A). We also classified the DEGs into different biological processes (Fig. 3B). Among the significant pathways of DEGs, PI3K-Akt signaling pathway showed the highest P value, thus we further analyzed the expression changes of the DEGs involved in PI3K-Akt signaling pathway. The DEGs upregulated by STM were indicated by red while those downregulated by STM were indicated by green (Fig. 4).

The differential expressed genes in HepG2 cells treated by STM. A. Differential expressed genes (DEGs) identified in STM treated HepG2 cells. The x-axis is log2 ratio of gene expression levels between two cells; the y-axis is p value based on -log10. The red dots represent the very significantly DEGs (P<0.01 and absolute value of log2(FC)>1 ); the blue dots represent the other DEGs (P<0.01 and absolute value of log2(FC)<=1 ); the gray blue dots represent the transcripts whose expression levels did not reach statistical significance (P>0.01). B. PCR analysis of seven DEGs. 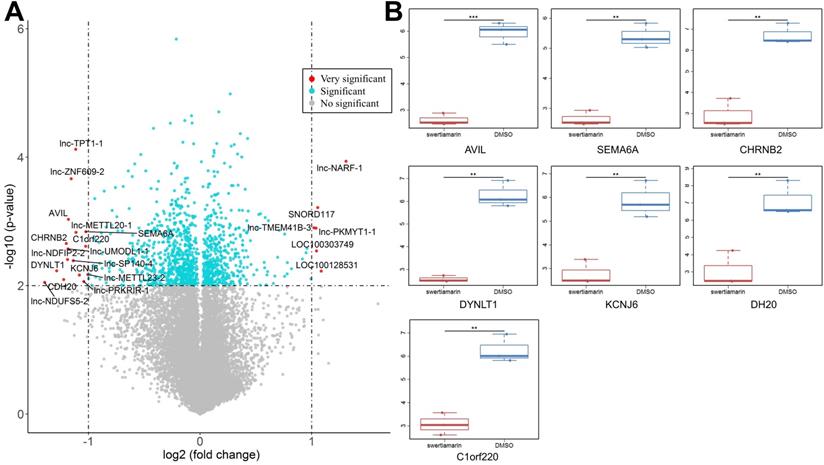 Prediction of targets of STM

To understand the mechanism underlying the anti-cancer activity of STM on HepG2 cells, we predicted the targets of STM. Chemical genomics-based virtual screening (CGBVS) could predict compound-protein interactions (CPIs) by using a support vector machine [8]. K Nearest Neighbor with K=3 (3NN) is another powerful program to predict and characterize drug-target associations [9]. We found that 47 targets of STM were predicted by CGBVS while 21 targets of STM were predicted by 3NN. Notably, 8 targets were predicted as the targets of STM by both programs (Fig. 5). Network analysis of these 8 targets and the most DEGs showed the potential functional interaction between them, which may then regulate the result gene (effector gene) to execute the activity of STM (Fig. 6).

Regulation network of JUN and STAT3

STM is a secoiridoid glycoside mainly isolated from Enicostemma species and has demonstrated a wide variety of biological activities such as anti-inflammatory, anti-pyretic, anti-microbial, anti-malarial, and anti-diabetic activity [10-16]. However, the anti-tumor activity of STM has seldom been reported. In this study, we first evaluated the anti-tumor activity of STM on HCC cells. Next we explored gene expression profiling of HepG2 cells treated by STM and performed bioinformatics analysis to elucidate the molecular mechanism and identify potential targets of STM to inhibit HCC. 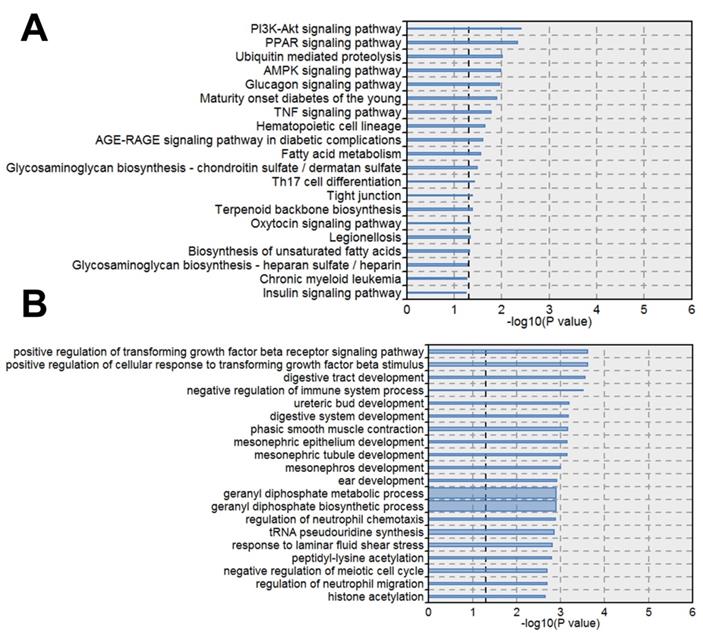 MMPs are crucially involved in the degradation of extracellular matrix and facilitate tumor invasion and metastasis. STM has been shown to downregulate the expression of MMP1 and MMP3 in fibroblast-like synoviocytes [19]. In this study, we did not find MMP1 and MMP3 in the list of DEGs. Instead, we found that MMP2 expression was downregulated by STM in HepG2 cells. Thus we speculate that STM may mainly downregulate MMP2 to inhibit the invasion ability of HepG2 cells. The differential regulation of MMPs by STM in different cell types may be due to cell type specificity. Further studies are needed to reveal the anti-metastasis mechanism of STM in HCC.

In conclusion, STM treatment led to significant changes in the expression of a variety of genes that modulate cell survival, cell cycle progression, apoptosis, and invasion. Moreover, most of these genes can be clustered into pathway networks such as PI3K, JUN, STAT3, which are predicted targets of STM. Further confirmation of these targets will reveal the anti-tumor mechanisms of STM and pave the way for the development of STM as a novel agent for cancer prevention and treatment.

Gene expression profiles of the PI3K-AKT signaling pathway in treated HepG2 cell. The red and green colors represent the log2(FC) of the corresponding genes. 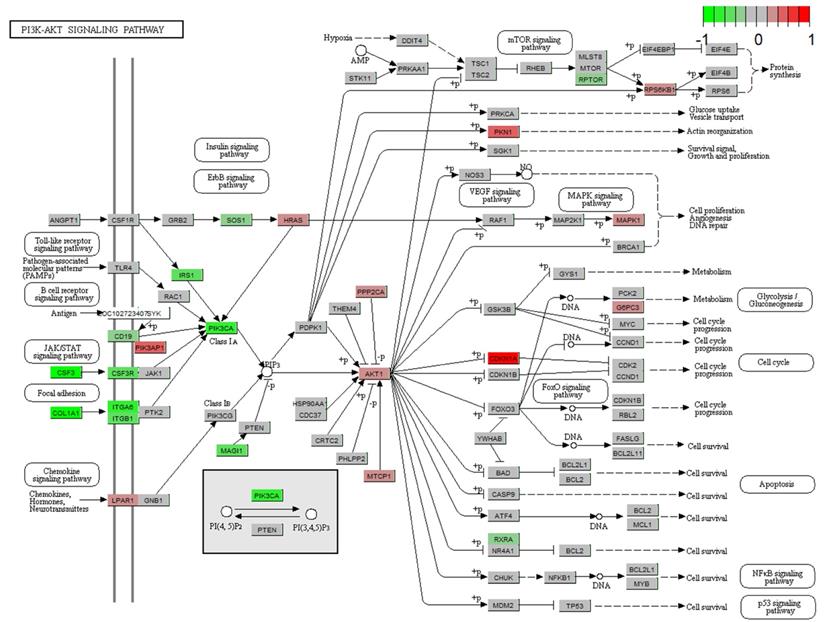 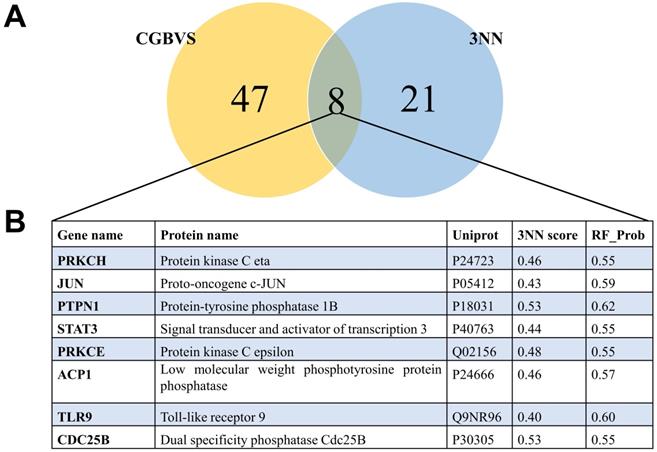 Network analysis of the consistent targets and the most differential expressed genes. The network shows the predicted functional interaction between the consistent targets (pink circle) and most DEGs (purple circle) according to the Genemania database. The gray nodes represents the result genes involved in the functional interaction between the pink and purple circles. Each colored line represents a different interaction, and the color line width indicates the confidence of the interactions. 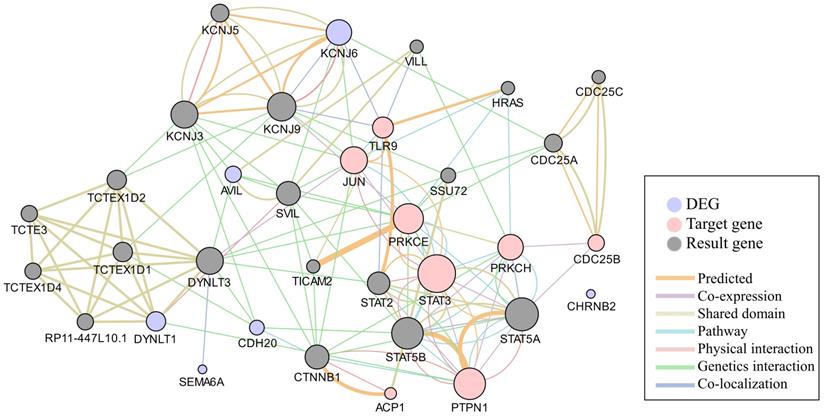 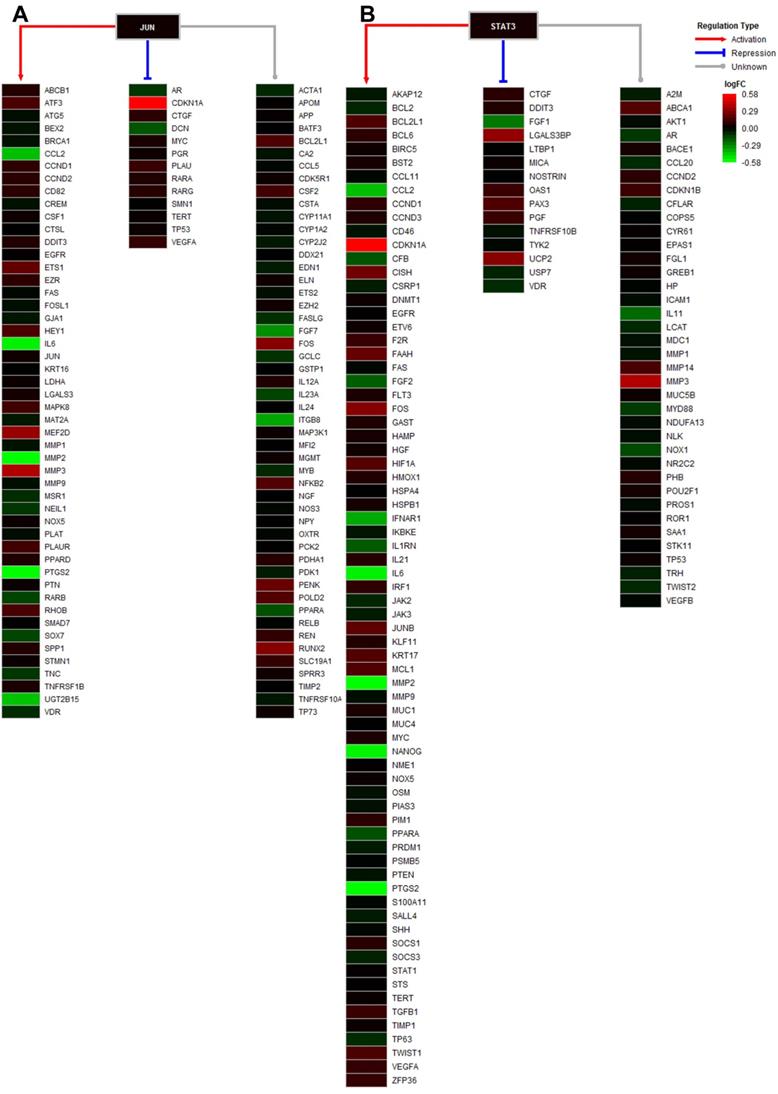