Retinoic acid-induced 14 (RAI14) is involved in the development of different tumor types, however, its expression and biological function in breast cancer are yet unknown. In the current study, we demonstrated that RAI14 was highly expressed in breast cancer. The high expression of RAI14 is positively correlated with the malignant progression of breast cancer and suggests a worse prognosis. Further, we found that knockdown RAI14 inhibits the proliferation, migration and invasion of breast cancer cells by regulating cell cycle and EMT through Akt/Cyclin D1, MMP2, MMP9 and ZEB1/E-cadhrin/Vimentin pathway. These findings revealed a novel function for RAI14 in breast cancer progression and suggest that RAI14 may become a promising diagnostic and therapeutic target for breast cancer.

Breast cancer is the most common female tumor worldwide. Due to the improvement of the level of diagnosis and treatment, breast cancer mortality rates have currently declined[1]. However, tumor invasion and metastasis remain the main cause of death in cancer patients. Indentifying the key proteins that promote the malignant progression of tumors and the development of new targeted drugs for breast cancer are important steps to improve the survival of cancer patients.

Retinoic acid-induced 14 (RAI14), also known as NORPEG, RAI13, is a novel protein-coding gene comprising six ankyrin repeats and two coil-coil domains [2]. RAI14 was first discovered in liver and can be induced in human retinal pigment epithelial cells (ARPE-19) by all-trans retinoic acid [3]. Studies have shown that RAI14 is expressed in many human tissues, especially in human placenta and testicular tissues [2, 4], and its function is closely related to the cytoskeleton. In recent years, more and more studies have found that RAI14 can be highly expressed in a variety of malignant tumors, including gastric cancer[5-7], lung cancer[8], ovarian cancer[9] and prostate cancer[10], and is positively correlated with the malignant progression of tumors. The high expression of RAI14 in these malignant tumors is significantly associated with the drug resistance response of tumor drugs and the proliferation and invasion of tumor cells. However, the expression and biological function of RAI14 in breast cancer have not been studied so far.

Our study aimed to analyze RAI14 expression in breast cancer tissue and its relevance to clinicopathological factors. Furthermore, we investigated the mechanism underlying the biological effects of RAI14 on breast cancer cells. Our results may provide a theoretical and experimental basis for the potential targeting of RAI14 in the diagnosis and treatment of breast cancer.

Tissue samples were obtained from 137 female breast cancer patients, who had undergone breast surgery at the First Affiliated Hospital of China Medical University, between 2011 and 2014. All patients did not received any radiotherapy, chemotherapy, endocrine therapy or other treatment before surgery, while excluding patients with other malignant tumors, skin disease, epidermal ulcer, diabetes, and other diseases. The clinical stage was determined based on the World Health Organization classification. The status of ER, PR and HER2 were examined in the hospital. All patients have written informed consent for this study, which was approved by the regional ethics committee of China Medical University.

The Immunohistochemical staining was performed on paraffin-embedded tissues according to the manufactuer's instructions of EnVision kit (MaiXin Biotech Co.,Fuzhou,China). The primary antibody was used rabbit anti-human RAI14 monoclonal antibody (1:150, Abcam, Cambridge, UK).The immunohistochemical scoring principle was according to the staining intensity (no signal=0, weak=1, moderate=2, high=3), and the percentage of staining cells (0%=0, 1%-10%=1, 11%-50%=2, 51%-80%=3, 81%-100%=4). The final score of 0-12 was based on multiplying the scores of intensity and percentage. The staining scores of RAI14 ≥4 was considered as high expression, <4 being regarded as low expression.

Cells were seeded in density 500 per well in 6 well plates. After 14 days cultured, colonies were fixed with 4% paraformaldehyde and stained with crystal violet. Colonies from 3 independent groups were counted and the data were presented as mean ± standard deviation (SD).

Transwell assay was used to evaluate cell migration and invasion. For migration assay, 4× 104 cells were seeded in the upper in serum-free culture medium (200μl), and the lower chamber filled with complete medium. The cells were fixed with 4% paraformaldehyde and stained with gemsa 15min, after 24h incubation. The images were acquired under microscope and migrated cells were counted in 5 random fields. The method of invasion assay was similar to migration, but the upper chamber coated with matrigel (BD Bioscience, Bedford, MA, USA).

Flow cytometry was carried out for the assessment cell cycle. Harvested cells at a density of 1× 106 cells/ml were fixed with 75% ice-cold ethanol, and then washed in cold PBS. Before analysis, cells were incubated with bovine pancreatic RNase (2mg/ml, Sigma) for 30nin at 37℃, followed by treated with propidium iodide (PI, 20μg/ml, Sigma) for 20min. Cell cycle analysis was performed using a Flow Cytometry System (BD Bioscience, Bedford, MA, USA).

Correlation between RAI14 and clinicopathologic parameters of breast cancer patients 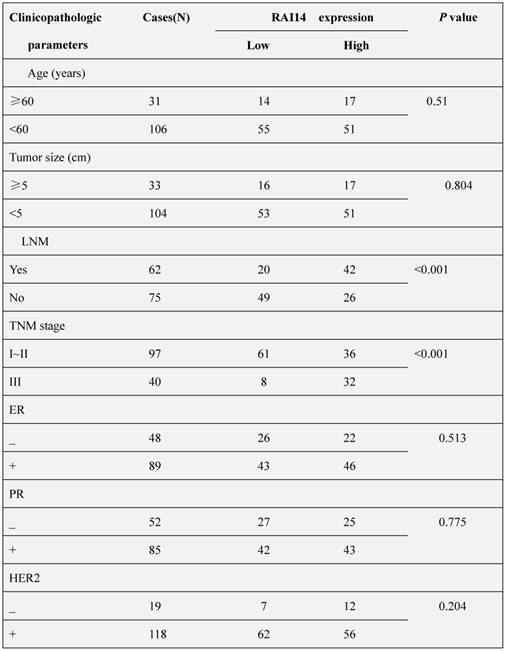 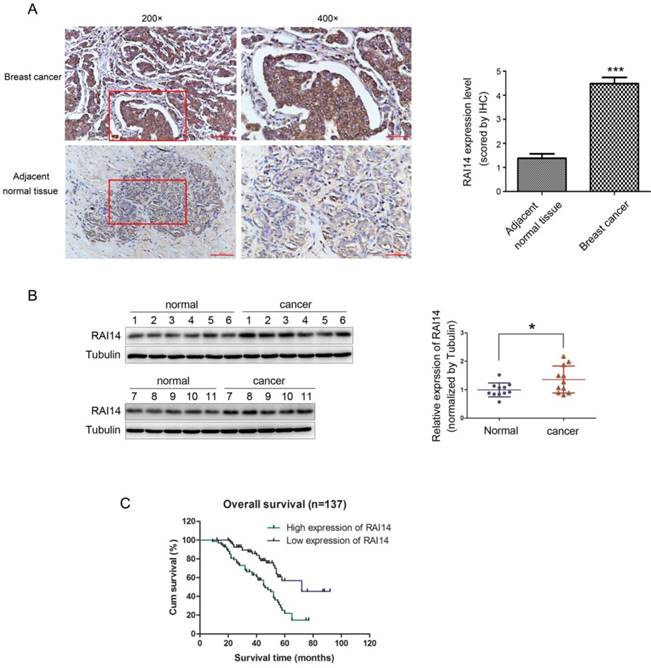 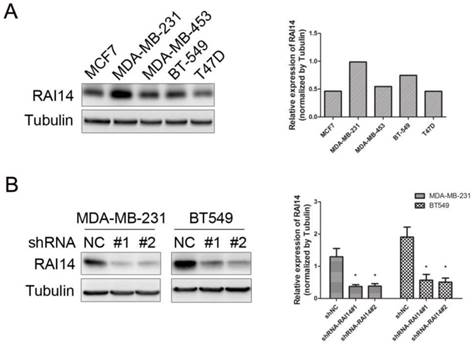 Knockdown of RAI14 expression inhibits the proliferation of breast cancer cells. (A)Proliferation was monitored by daily quantification of cell number for up to 3 days. * P < 0.05. (B) The colony forming assay showed that RAI14 knockdown inhibited cell growth in MDA-MB-231 and BT549 cells, * P < 0.05. (C) The cell cycle was suppressed after RAI14 knockdown. *P < 0.05. (D) The level of p-Akt and Cyclin D1 was decreased followed by knockdown RAI14, Tubulin served as protein loading control. 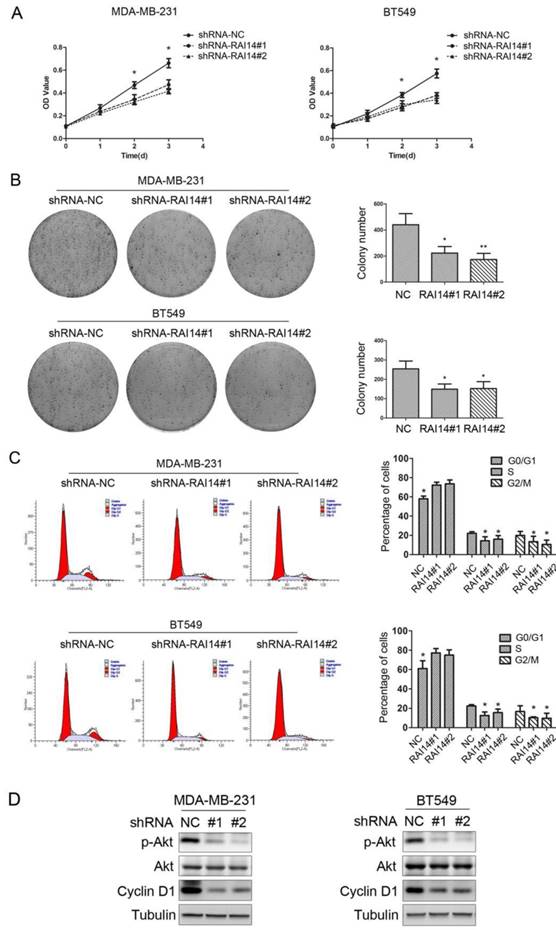 To study the function of RAI14 in MDA-MB-231 and BT549 cells, the RAI14 knockdown stable cell lines were used to analyze the silencing effect. As shown in Figure 2B, the level of RAI14 was significantly decreased in the shRNA-stable transfected cells compared to control.

Our migration assay revealed that the downregulation of RAI14 markedly suppressed MDA-MB-231 and BT549 cell migration (Figure 4A). Similarly, an invasion assay also indicated that RAI14 silencing significantly reduced cell invasion compared to control MDA-MB-231 and BT549 cells (Figure 4B), respectively. These results suggested that RAI14 silencing clearly inhibited breast cancer cell migration and invasion. Furthermore, western blotting analysis showed that knockdown of RAI14 inhibits the expression of MMP2 and MMP9 in breast cancer cells (Figure 4C). As indicated by the Western blot assay, the expression of the epithelial marker protein E-cadherin was increased, while the expression of the mesenchymal marker protein ZEB1 and vimentin were decreased in the shRAI14 group compared with the shNC group in both MDA-MB-231 and BT549 cells (Figure 4D). These results indicated that knockdown of RAI14 could inhibit the migration and invasion of breast cancer cells though affecting progression of EMT. 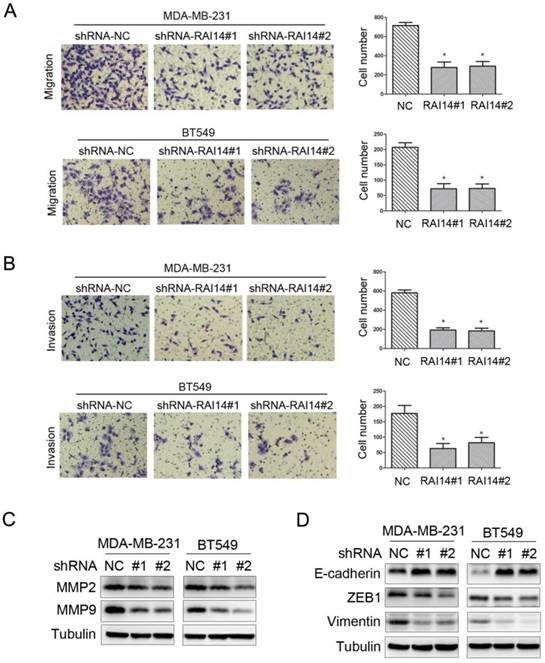 RAI14 was first discovered in liver and can be induced in human retinal pigment epithelial cells (ARPE-19) by all-trans retinoic acid [3]. Nowadays, more and more research is now focusing on the role of RAI14 in tumors. In gastric cancer, RAI14 was highly expressed in cancer, and the high expression of RAI14 could be an independent predictor of poor prognosis in gastric cancer patients [6]. RAI14 knockdown inhibited proliferation, migration and invasion and promoted apoptosis by downregulating the Akt pathway in gastric cancer cells, and RAB31 might be a downstream target gene of RAI14 [7]. In lung cancer, RAI14 was up-regulated in A549 and 31 of 71 patients. High expression of RAI14 could inhibit cell proliferation, indicating its potential as a new biomarker for lung adenocarcinoma [8]. In ovarian cancer, NR2F2 regulates the expression of NEK2, RAI14, and multiple other genes involved in the cell cycle [9]. In prostate cancer, RAI14 involved in the regulation of tumor cytoskeletal cell compartments [10].

Next, we want to explore how RAI14 affects cell proliferation, migration and invasion. AKT-Cyclin D1 pathway plays an important role in cell proliferation [11, 12]. Previous study has reported that RAI14 knockdown significantly reduced the level of the phosphorylated form p-Akt in gastric cancer cells. Meanwhile, the expression of its downstream protein Cyclin D1 was also decreased in the RAI14 deficiency cells. We also found that down-regulation of RAI14 can inhibit the phosphorylation of Akt and the expression of Cyclin D1 in breast cancer cells, which is consistent with previous reports [7].

Degradation of the basal membrane is a necessary step in most cancers, and the MMPs have played an important role in this process [13, 14]. In our study, we found that RAI14 knockdown reduced the expression levels of MMP2 and MMP9. In breast cancer, EMT has been defined as a critical component of the metastatic process [15, 16]. Once EMT occurs, cancer cells acquire phenotypes that are more likely to invade [16]. The occurrence of EMT is believed to change the expression of genes whose products play a key role in maintaining epithelial status, such as e-cadherin [17], and this inhibition occurs at the transcription level through the action of EMT transcription factors, such as ZEB1[18]. In our study, we found that RAI14 knockdown increased the expression of epithelial marker e-cadherin and decreased the expression of mesenchymal marker vimentin. Meanwhile, the expression of EMT transcription factor ZEB1 is reduced when knockdown RAI14 suppresses EMT. These results suggest that RAI14 silencing reduces the migration and invasion of breast cancer cells by inhibiting EMT.