Background: Currently, there is still some controversy regarding whether early breast cancer patients with a tumor size of ≤5 cm and 1-3 positive lymph nodes should undergo postoperative radiotherapy (PRT).

Materials and Methods: We obtained data from the Surveillance, Epidemiology, and End Results (SEER) 18 database. Then, we conducted propensity score matching (PSM), according to the radiotherapy record. The Kaplan-Meier and Cox regression analysis were conducted to explore prognostic factors in breast cancer. 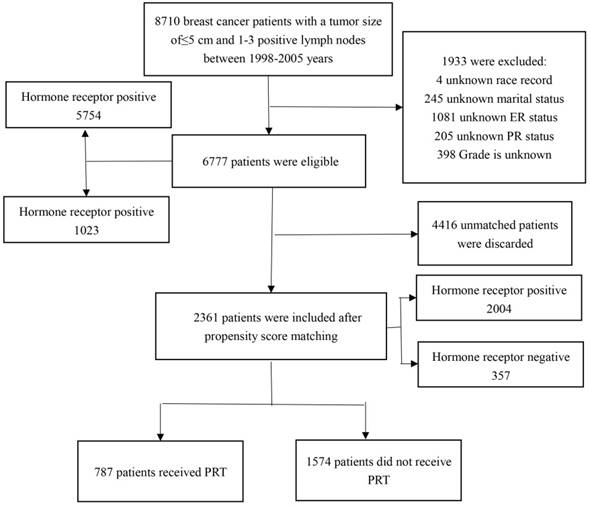 In order to improve the evidence level of the test and control for known variables except for PRT on the experimental, 1:2 patient pairing with a caliper size of 0.1 was performed by PSM. Patients aged 75 years who had undergone surgery were divided into two groups according to whether or not PRT was given. We used frequencies and proportions for categorical variables to describe the characteristics of patients and compared the difference of two groups using the chi-square (χ2) test. To evaluate the effect of radiotherapy, Kaplan-Meier analysis and log-rank test were conducted. A Cox proportional hazards regression model was conducted to predict independent risk factors for all-cause and breast cancer-specific death. All statistical tests were two-sided, with statistical significance evaluated at the 0.05 αlevel. All calculations were performed by R software (version 3.5.1).

Prognostic value of PRT on OS

Kaplan-Meier survival curves in early breast cancer patients with age >= 75 Years for overall survival before (A) and after (B) PSM. PSM: propensity score matching. 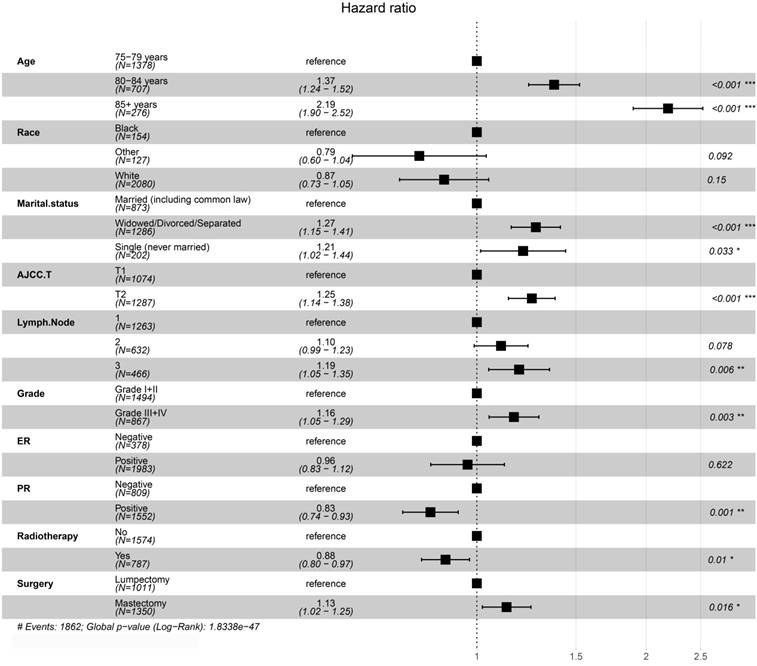 To our knowledge, this study is the first research to explore the role of elderly female breast cancer patients older than 75 years old with a tumor size of ≤5 cm and 1-3 positive lymph nodes, based on SEER database. We found that PRT may benefit for elderly women with early breast cancer, especially in HR+ patients or white patients.

Age was an important indicator for overall survival, and there was an imbalance in the age distribution of patients who received PRT (9.47%, ≥85-years-old) and those who did not receive PRT (20.33%, ≥85-years-old). The number of patients receiving radiation therapy decreased with age, which might be due to the lowering of expectations of survival for the elderly. However, there was no clear evidence that PRT was not beneficial to this population. We found an inverse association between the receipt of postoperative radiotherapy and age. Moreover, patients who received postoperative radiotherapy, on average, tended to have a higher OS. This is consistent with the research conducted by Ali et al [13]. As the average life expectancy in the United States continues to increase, the standard for “elderly” care may continue to rise. We chose 75 years old as the distinction for elderly patients compared to previous research using 70 years old and was consistent with the latest National Comprehensive Cancer Network (NCCN) clinical practice guidelines [14]. 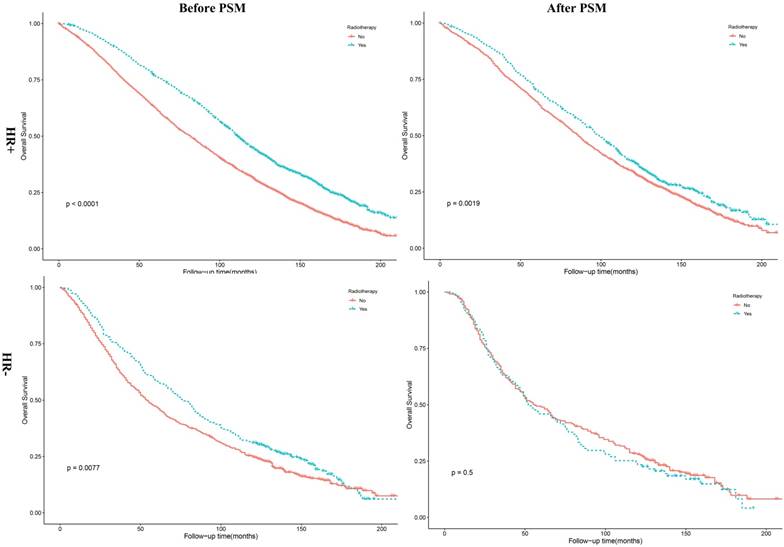 The treatment of breast cancer depends not only on clinical pathology, but also on the breast cancer molecular subtype. Previous study revealed that molecular subtypes were also associated with radiotherapy treatment [18]. Our results showed PRT was beneficial to breast cancer patients, especially in HR+ patients. However, we found no association between PRT and HR- patients. Compared with the number of HR+ patients (5754 patients), the number of HR- patients (1024 patients) was relatively insufficient. Therefore, research on larger prospective clinical trials of HR- patients was still needed to verify the conclusion.

There were also some limitations to our study. First, some potential sources of heterogeneity were inevitable. For instance, we didn't know whether those patients, who didn't receive PRT, gave up all treatment and it might lead to an exaggeration of adverse prognosis without postoperative radiotherapy. Second, we found that PRT can improve patient OS but lacks data regarding the side effects of radiotherapy in patients. Third, due to the lack of data on HER2, we couldn't analyze the role of PRT in different molecular subtypes. Fourth, most patients were white in SEER database, subgroup analysis by race may lead to improper conclusions for other race. Finally, the follow-up time is best calculated after surgery and the survival time in the SEER database is calculated from the date of diagnosis.

We thank the staff at the SEER database. This study was supported by National Natural Science Foundation of China (No. 81471670); the International Cooperative Project of Shaanxi province, China (No. 2016KW-008) and the Key research and development plan, Shaanxi Province, China (2017ZDXM-SF-066).

This study was approved by The First Affiliated Hospital, School of Medicine, Zhejiang University. The data released from the SEER database did not require informed patient consent because cancer is a reportable disease in every state in the US.