Methods: In this population-based study, patients diagnosed with AML between 1973 and 2015 were identified in the Surveillance, Epidemiology, and End Results database. Cumulative mortality by cause of death was calculated. To quantify the excessive cardiac-specific death compared with the general population, standardized mortality ratios (SMRs) were calculated. Multivariate Cox regression analyses were performed to identify risk factors associated with cardiac-specific death and AML-specific death.

Results: A total of 64,679 AML patients were identified between 1973 and 2015; 68.48% of patients (44,292) received chemotherapy. Among all possible competing causes of death, AML was associated with the highest cumulative mortality. The AML patients who received chemotherapy showed excessive cardiac-specific mortality compared with the general population, with an SMR of 6.35 (95% CI: 5.89-6.82). Age, year of diagnosis, sex, and marital status were independently associated with patient prognosis.

Conclusion: Cardiac-specific mortality in AML patients receiving chemotherapy is higher than that in the general population.

Acute myeloid leukemia (AML) is a malignancy originating from abnormally differentiated blasts of myeloid lineage [1]. It has been estimated that 61,780 new leukemia cases and 22,840 leukemia-related deaths will be observed in the U.S.A. in 2019 [2]. Previous reports showed that AML usually occurs in elderly adults, of whom the median age is 67 years, and approximately 30% of AML patients are over 75 years old [3]. Over the past decades, development in hematopoietic stem cell transplantation, supportive care and salvage chemotherapy has led to the prolongation of patient survival [4, 5]. The first-line induction chemotherapy regimen for AML, except for acute promyelocytic leukemia (APL), has been the daunorubicin and cytarabine (DA) regimen for more than three decades, and this anthracycline-containing regimen is believed to exert cardiac toxicity [6]. Previous studies on the adverse effect of anthracycline on heart physiology demonstrated that it may cause arrhythmia and congestive heart failure in patients with breast cancer and Hodgkin lymphoma [7-11]. Furthermore, a recent publication demonstrated that it may lead to left ventricular function impairment in children survivors of AML [12]. The treatment of APL has developed dramatically over the past three decades due to the elucidation of the PML/RAR fusion gene, from anthracycline monotherapy to arsenic-based therapy to a combinatorial therapy of arsenic and all-trans retinoic acid [13]. However, arsenic agents have been proven to impair cardiac electrophysiology and ultimately increase cardiac-specific mortality [14, 15]. Therefore, it is thought that chemotherapy is of high risk for AML patients, a population with many senior citizens [16]. Despite the fact that agents with heart toxicity are frequently used in AML, quantitative analyses of cardiac-specific mortality based on large sample sizes have not been reported. Thus, it is of great importance and urgency to clarify the cardiac-specific mortality in AML patients receiving chemotherapy.

Previous reports in this field mainly focused on the molecular interactions of heart toxicity, potential biomarkers, and preventive agents or were simply case reports [17-23]. It is also important to clarify the epidemiology of chemotherapy-related cardiac-specific death in AML patients to find some clues for basic research. The current study utilized data from the population-based Surveillance, Epidemiology, and End Results (SEER) database to report cardiac-specific mortality by age and to identify risk factors.

We accessed the SEER database, which is maintained and updated by the National Cancer Institute, to enroll AML cases. For all incident cases in the coverage areas, the SEER registries collect clinicopathological and demographic information, such as sex, race, age, socioeconomic status (SES), survival time, and vital status [24]. The 18 registries of the SEER database cover approximately 28% of the total population, with nine registries covering 9% of the total population [25].

The baseline characteristics of the included cases are summarized in Table 1, with frequencies for categorical variables and means and corresponding standard deviations for continuous variables; their differences were tested by chi-square analyses and unpaired t tests, respectively. Cumulative mortality was computed for each cause of death and grouped by age. As the mortality of cardiac-specific diseases increases significantly with age in the general population, we calculated the standardized mortality ratios (SMRs) with respect to the mortality data for each age category of the general population in the U.S.A. to address this problem [30]. We divided the observed number of cardiac-specific deaths by the expected number in the same age category, which was obtained by multiplying the cumulative person-time in AML patients in an age group with the age-specific cardiac-specific mortality rates for the general population in the same age group. All age-specific SMRs were computed for patients older than 50 years receiving chemotherapy. The 95% confidential intervals and p-values were also calculated [31, 32]. Multivariate Cox regression analyses were performed to identify the risk factors for both cardiac-specific and AML-specific death. All other analyses were performed with Stata software, version 14.0 (StataCorp. 2015. Stata Statistical Software: Release 14. College Station, TX: StataCorp LP.). A two-sided p < 0.05 was considered statistically significant.

Basic characteristics of all AML cases by chemotherapy status between 1973 and 2015. Data are number of patients in each category, with percentage in parentheses.

Cumulative mortality by causes of death in patients with AML receiving chemotherapy from 1973 to 2015 in SEER 18 registries.

AML-specific and cardiac-specific mortality by age in patients with AML receiving chemotherapy from 1973 to 2015 in SEER 18 registries. 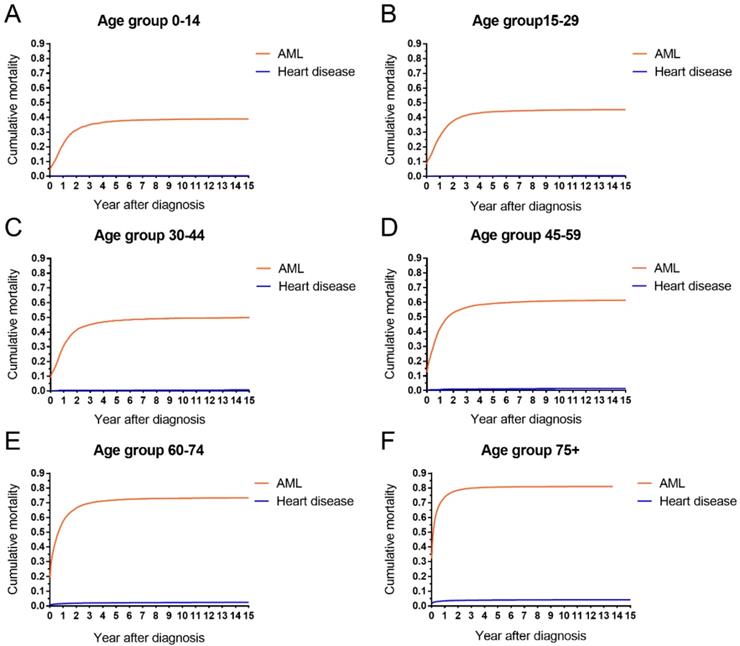 Differences in cardiac-specific mortality by sex, age, race and socioeconomic status in patients with AML receiving chemotherapy from 1973 to 2015 in SEER 18 registries. 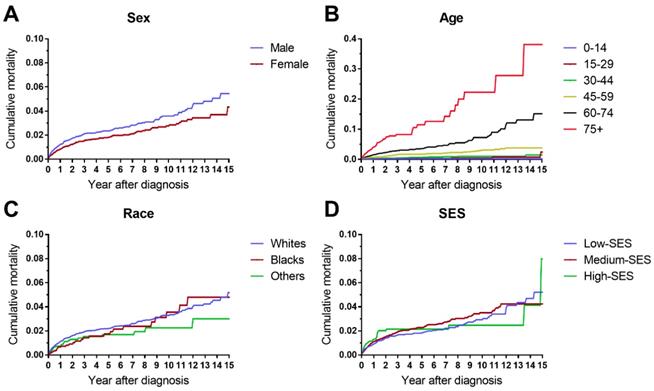 Multivariate Cox regression analyses for AML patients with chemotherapy by causes of death. Data are hazard ratios, with 95% confidence interval in parentheses.

Here, higher cardiac-specific mortality in AML patients who received chemotherapy was confirmed with an SMR of 6.35 compared with the general population. AML patients show increased cardiac-specific mortality as a result of both tumor cell infiltration in heart tissue and the administration of cardiotoxic chemotherapy, especially anthracycline-containing induction therapy [33-35]. The cardiotoxicity of anthracycline increases in a cumulative dose-related manner, and therefore, a maximally tolerated dose was set as a cumulative dose of 550 mg/m2 to achieve a balance between tumor control and cardiac function impairment [36]. In a study of induction chemotherapy, chemotherapy and cytokines released from the lysis of tumor cells may have instigated congestive heart failure in 18 out of 217 patients (8.29%); 5 of these patients recovered, whereas the remaining 13 patients did not (median survival of 71 days) [37]. Basic research studies have shown that anthracycline can also cause myocyte necrosis [38, 39]. These diverse detrimental effects are associated with polymorphisms of anthracycline metabolism enzymes, which makes tailored safety dosing possible [12, 21, 40, 41]. Although the mechanism of cardiotoxicity in AML has not been clarified, studies in breast cancer patients whose chemotherapy regimens contain anthracycline demonstrated that the impairment of heart cells is mediated by stress protective signaling and reactive oxygen [42, 43]. Notably, cardiac damage does not necessarily lead to cardiac-specific death, and thus, the mortality observed here may underestimate the cardiac damage. Therefore, future studies using ultrasound, MRI or PET as surveillance methods are of importance to provide a more precise landscape of heart damage. To study the excessive cardiac mortality that might be induced by chemotherapy, we calculated the SMRs, taking into account the increasing mortality from heart diseases with age in the general population. In the current study, we found a significantly higher SMR in patients who received chemotherapy and in each age category. Counterintuitively, patients who received chemotherapy showed a lower SMR compared with patients without chemotherapy. This result must be interpreted with caution, as there are differences in baseline characteristics, with generally higher ages and higher unmarried rates, in patients without chemotherapy. It has been reported that patients who receive chemotherapy are generally younger and have fewer comorbidities and better health [44-46].

In multivariate Cox regression analyses, the risks of death from heart diseases and AML increased with age, which seemingly contradicts the decreasing SMRs. This can be partially explained by the fact that the SMR was calculated by dividing the observed number of deaths in the AML cohort by the expected number of deaths in the general population who also show increasing mortality with increasing age. In terms of sex, females showed a reduced risk of cardiac-specific death compared with males, implying intrinsic biological differences in cardiac-specific disease mortality [16, 47]. In terms of marital status, unmarried patients and patients with unknown marital status showed a higher risk of death compared with married patients, in line with a previous publication [48]. This survival disparity may be associated with the impact of better social support on treatment adherence; living in a close and cohesive family increases the probability of adherence 1.7-fold, whereas living in an unstable family increases the risk of nonadherence 1.5-fold [49]. In terms of SES, residing in high-poverty regions was marginally associated with a higher risk of cardiac-specific death, which implies poor healthcare accessibility in poor regions [50, 51]. In AML-specific mortality, elderly patients and patients diagnosed in early decades had a higher risk of death. The higher risk of death in elderly patients may be attributable to treatment-related mortality and resistance to chemotherapy [52, 53]. Elder patients are less able to tolerate intensive chemotherapy because of poor performance status, more comorbidities and poor immunity towards posttreatment infection. Additionally, older individuals show a high incidence of unfavorable genetic mutations and treatment-resistant phenotypes [54-56]. Importantly, Black patients have a higher risk of death due to treatment differences and unmeasured genetic differences associated with excessive mortality during induction [57, 58]. A lower risk of AML-specific death in females may imply a protective role of estrogen [59, 60]. Inferior survival in patients from medium-poverty and high-poverty regions implies the impact of SES on survival via the limitation of access to healthcare resources, such as adequate treatment and surveillance [26, 61, 62].

The current study has strengths as well as limitations. First, the SEER database does not provide detailed information about the chemotherapy regimen, chemotherapy duration or application of hematopoietic stem cell transplantation, which have also been proven to be harmful to heart function [63, 64]. Moreover, the SEER database does not provide detailed information, such as comorbidities, types of heart disease, and menopause status of females, which would be helpful for further analysis. Second, due to the long-term follow-up of these patients, the hazard ratios here imply the average risk of a specific group. Third, the results in the current study may be biased by confounding factors owing to its retrospective nature. As all cases came from the 18 registries of the SEER database, the epidemiological trend here can only reflect the pattern in the selected areas, and great heterogeneity exists in different patient populations in terms of AML biology (different mutation patterns), healthcare services, and chemotherapy dosages based on physicians' preference. Therefore, caution should be used when interpreting the current results to predict the epidemiology of AML in other regions. Fourth, the calculation of SMRs did not adjust for other confounders, as we did in the multivariate Cox regressions, which may confound these results. Fifth, the standard mortality data of the general population from CDC WONDER are provided in a combined manner, and the exclusion of persons diagnosed with AML was not possible. However, due to the low incidence of AML (nearly 4 per 100,000) in the general population, our results may not be substantially biased. Last, the representativeness of the SEER database for the general population in the U.S.A. is moderately questioned, as the population in SEER registries are shown to have a lower SES and more diverse composition of ethnic minorities [65].

In summary, the current study distinguishes itself by the large sample size and long follow-up time, which make up for the limitations of not having a randomized clinical trial on this topic. Studying the long-term cardiac-specific mortality in AML patients may help to better tailor clinical surveillance protocols and ultimately improve patient wellbeing.

Availability of materials and data

All data in the current study can be accessed from the Surveillance, Epidemiology, and End Results database.

31. Vandenbroucke JP. A shortcut method for calculating the 95 percent confidence interval of the standardized mortality ratio. American Journal of Epidemiology. 1982;115:303-4