Background and Aim: Human SLFN11 gene encodes a protein with structural similarity to RNA helicases, which was reported to sensitize cancer cells to DNA-damaging agents. This study explored the epigenetic regulation and mechanism of SLFN11 in human gastric cancer.

Gastric cancer (GC) is the third most lethal cancer worldwide[1]. H. pylori (HP) infection is strongly associated with GC[2]. HP triggers the DNA damage response and immune response crosstalk promoting a vicious cycle of DNA damage and persistent inflammation that fuels tumorigenesis[3]. Although most GCs are sporadic, aggregation within families occurs in roughly 10% of cases. Truly hereditary cases are thought to account for 1-3% of GC, including at least three main syndromes: hereditary diffuse gastric cancer, gastric adenocarcinoma and proximal polyposis of the stomach, and familial intestinal gastric cancer[4, 5]. Hereditary diffuse gastric cancer was recognized to be caused by inherited CDH1 mutations[6].

Hereditary nonpolyposis colorectal cancer (CRC), also referred to as the Lynch syndrome, is the most common form of hereditary colorectal cancer. Lynch syndrome has a molecular phenotype of microsatellite instability that is caused by a germ-line mutation in any of the mismatch repair genes MLH1, MSH2, MSH6, PMS1, PMS2, or EPCAM[7]. The frequency of gastric cancer in carriers of Lynch syndrome mutations has been estimated at 1.6%, and it mainly happens to intestinal-type of Lauren classification[8]. The frequency of gastric cancer in families carrying TP53 mutations ranges from 1.8% to 4.9%[9]. A meta-analysis of more than 30 studies showed that the relative risk of GC in BRCA1 or BRCA2 carriers is 1.69%, which is higher than the relative risk for pancreatic, prostate, and colorectal cancer[10]. In microsatellite unstable sporadic GC, the mismatch repair defect is mainly caused by MLH1 promoter region hypermethylation[11].

Human cells and their genome are under constant attack by DNA-damaging agents, resulting in tens of thousands of DNA lesions daily [12]. The cells respond to DNA lesions by activating a complex mechanism, which is named DNA damage response (DDR)[13]. Defects of DDR may induce carcinogenesis[14]. Schlafen (Slfn) (from the word schlafen, which in German means sleeping) genes were originally identified during screening for growth regulatory genes[15-18]. To date, 10 mouse (Slfn1, 1L, 2, 3, 4, 5, 8, 9, 10, and 14) and 6 human (Slfn5, 11, 12, 12L, 13, and 14) Slfn genes have been identified[15-18]. SLFN11 was discovered by bioinformatics analyses of cancer cell databases as a causal and dominant genomic determinant of response to widely used anticancer drugs, including topoisomerase Ⅰ (camptothecin) /Ⅱ inhibitors (etoposide), alkylating agents (cisplatin and carboplatin) and DNA synthesis inhibitors (gemcitabine)[19]. Our previous study found that SLFN11 is frequently methylated in CRC, and methylation of SLFN11 reduced the sensitivity of CRC cells to cisplatin[20]. The epigenetic regulation and function of SLFN11 in human GC remain to be elucidated.

Total RNA was isolated by Trizol reagent (Invitrogen, Carlsbad, USA). PCR primers for SLFN11 and GAPDH are listed in Table 1.

Primers and siRNA used in this study

Bisulfite treatment was carried out as previously described[21]. BSSQ primers encompassed a 268 bp (-718 to -451 bp) region upstream of the transcription start site (TSS) of SLFN11. MSP and BSSQ primers are listed in Table 1. The thermal cycling conditions were described previously[20].

GC cells were seeded into 6-well culture plates at a density of 800 cells per well in triplicate. After 2 weeks, cells were fixed with 75% ethanol for 30 min and stained with 0.2% crystal violet (Beyotime, Nanjing, China).

GC cells were plated onto 6-well plates at a total of 1000 cells per well. After overnight incubation, cells were treated with cisplatin (1 μM) for 24 h and maintained in drug-free medium for an additional 2 weeks until visible colonies were evident. Cells were stained with 0.2% crystal violet.

For apoptosis analysis, GC cells were seeded in 6-well plates at a density of 1.5 × 106 cells/ml. Cells were treated with a concentration of 2 μM cisplatin for 24 h, harvested using 0.2% trypsin without ethylene diamine-tetraacetic acid (EDTA), stained according to manufacturer's instructions of the Annexin V-FITC/PI Apoptosis Detection Kit (KeyGen Biotechnology, China).

SLFN11 unexpressed or stably re-expressed BGC823 cells (1 × 106) were suspended in 0.1 ml phosphate buffer saline (PBS) and injected subcutaneously into the dorsal left side of 4-week-old male Balb/c nude mice (5 per group). The diameter of the tumors was measured every 3 days. Tumor volume (mm3) was estimated by the following formula: tumor volume = (length) × (width)2/2. Mice were sacrificed at the 21st day after inoculation, and tumor weights were measured after dissection. All procedures were approved by the Animal Ethics Committee of the Chinese PLA General Hospital. 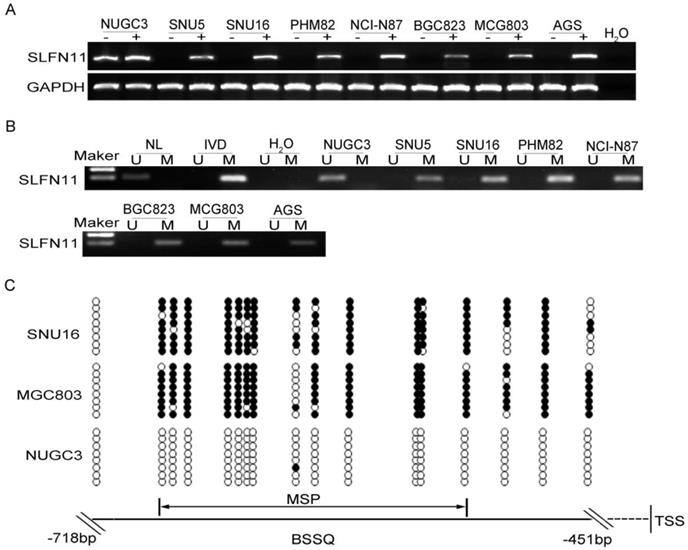 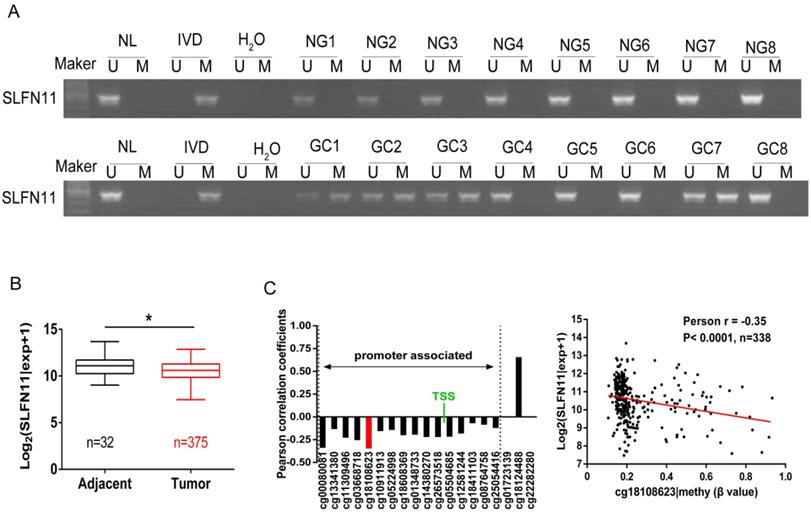 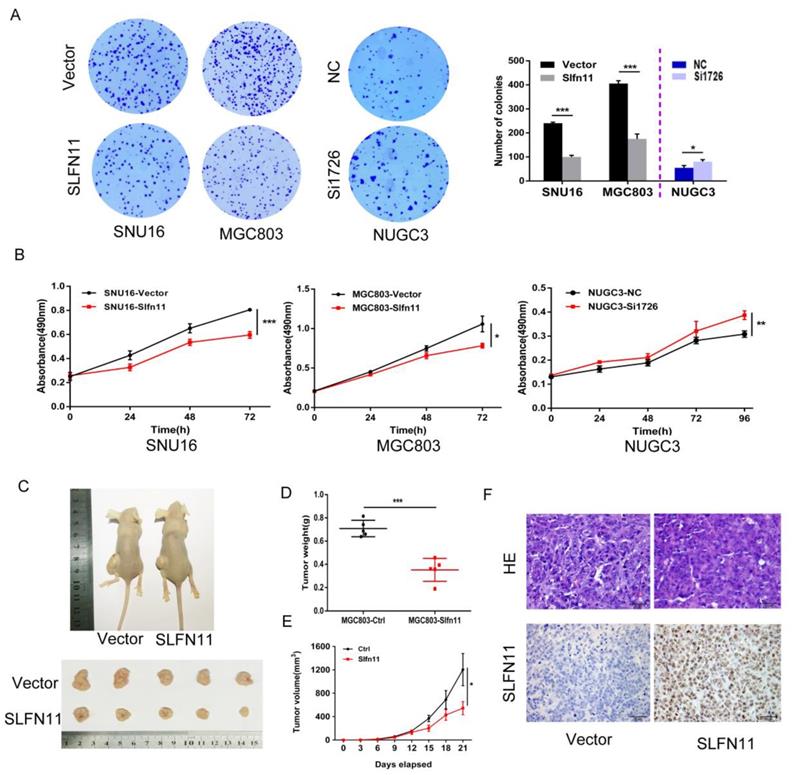 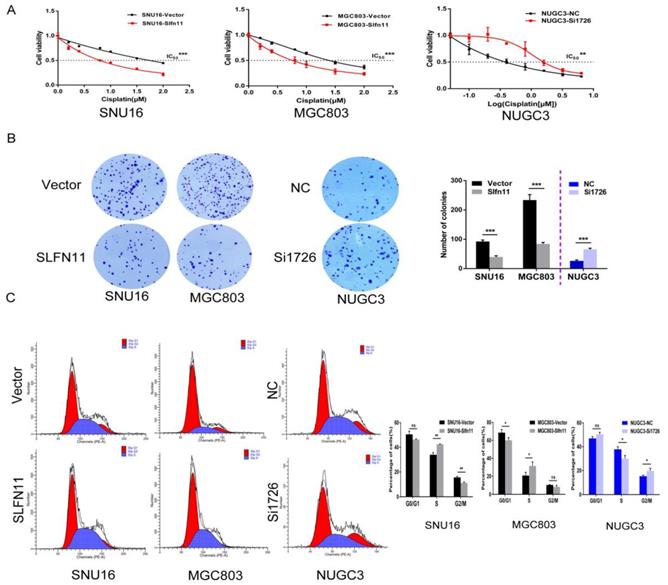 The sensitizing effects of SLFN11 on GC cells were also determined in the long-term colony formation assay. Under treatment with 1 μM of cisplatin, the numbers of colonies before and after stable re-expression of SLFN11 were 92 ± 5 versus 40 ± 4 in SNU16 cells and 234 ± 19 versus 84 ± 5 in MGC803 cells. The colony numbers were significantly reduced after re-expression of SLFN11 in SNU16 and MGC803 cells (both p < 0.001, Figure 4B). Upon treatment with 1 μM of cisplatin, the number of colonies was 26 ± 3 versus 66 ± 4 in NUGC3 cells before and after knockdown of SLFN11. The number of colonies increased significantly after knockdown of SLFN11 in NUGC3 cells (p < 0.001, Figure 4B). These results further indicate that SLFN11 sensitizes GC cells to cisplatin.

Given the impact that the DDR can have on both disease development and response to treatment, it seems reasonable to consider categorizing tumors according to their DNA repair defects and to use this information to personalize treatment[29]. Silencing of DDR genes by promoter region hypermethylation was frequently found in human gastric cancers[30, 31]. In the clinic, functional biomarkers of the DDR-pathway should be identified before treatment with a DNA-damaging agent. SLFN11 is a nuclear protein and its expression is causally associated with the activity of DNA-damaging agents in human cancer[19]. Our previous study found that SLFN11 is frequently methylated in human CRC and SLFN11 methylation reduced sensitivity of CRC to cisplatin[20]. In this study, we found that SLFN11 is methylated in 29.9% of human GC, and the expression of SLFN11 is regulated by promoter region methylation. Methylation of SLFN11 is significantly associated with tumor size. SLFN11 suppressed GC cell growth both in vitro and in vivo. These results suggest that SLFN11 is a tumor suppressor in human GC, and SLFN11 methylation is a potential GC detection marker.

DNA-damage checkpoints occur throughout the cell cycle. If DNA damage occurs during S-phase, the intra-S-phase checkpoint is activated blocking further replication[32]. Cisplatin is reported to cause replication arrest by DNA crosslinking in the S-phase[33]. Several studies indicated that DNA synthesis continues to occur in cells that fail to divide following treatment with cisplatin[34], suggesting that a cellular mechanism for bypassing platinum-DNA lesions may be operative. This mechanism is now known to be translesion synthesis (TLS), and the efficiency and fidelity with which cells are able to bypass DNA-platinum lesions is linked to drug sensitivity[35]. 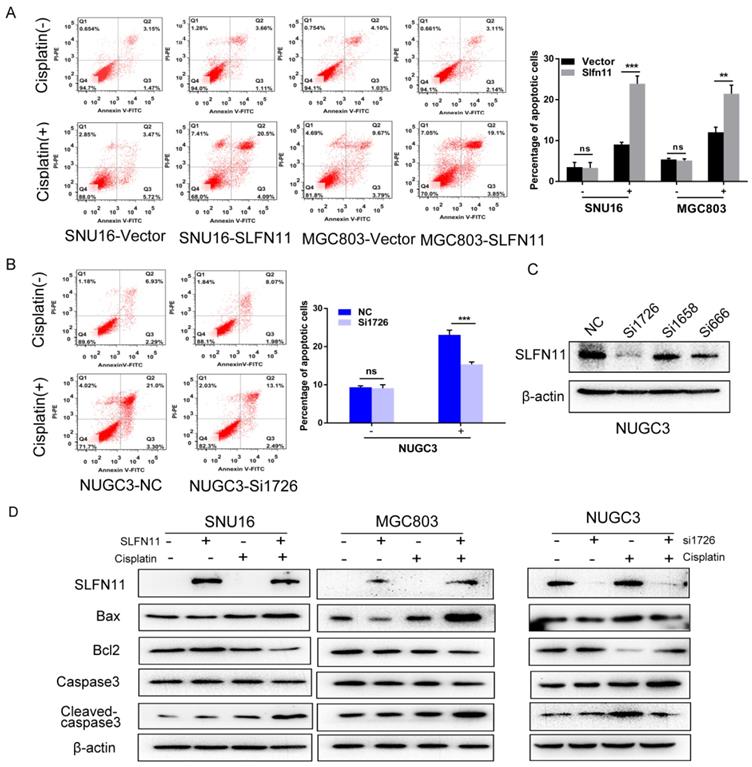 SLFN11 was reported to block stressed replication forks by inhibiting RPA binding to nascent DNA[28]. Thus, we explored the synergistic activity of SLFN11 and cisplatin in GC cells. As expected, S-phase arrest was induced by adding cisplatin to SLFN11 re-expressed GC cells compared to SLFN11 unexpressed parental GC cells. These results suggest that SLFN11 methylation is a resistant marker for cisplatin in human GC.

We thank Xiaomo Su for experiment preparation. The statistics work was helped by Xiaoyong Sai.

The datasets analyzed during the current study available from the corresponding author on reasonable request.

This study was approved by the institutional review board of the Chinese PLA General Hospital.

YP, LW and LLW performed the experiments and obtained the data. YP and LW wrote the manuscript. MG, GN and LZ provided experimental advices and supervised the study. All authors read and approved the final manuscript.

10. Friedenson B. BRCA1 and BRCA2 pathways and the risk of cancers other than breast or ovarian. MolGenMed. 2005;7:60