DOCK family proteins are evolutionarily conserved guanine nucleotide exchange factors for Rho GTPase with different cellular functions. It has been demonstrated that DOCK1 had adverse prognostic effect in acute myeloid leukemia (AML). We first analyzed data of 85 AML patients who were treated with chemotherapy and had available DOCK1 to DOCK11 expression information and found that DOCK1 and DOCK2 had prognostic significance in AML. In view of the known prognosis of DOCK1 in AML, we then explored the prognostic role of DOCK2. One hundred fifty-six AML patients with DOCK2 expression data were extracted from The Cancer Genome Atlas (TCGA) database and enrolled in this study. Patients were divided based on treatment modality into the chemotherapy group and the allogeneic hematopoietic stem cell transplant (allo-HSCT) group. Each group was divided into two groups by the median expression levels of DOCK2. In the chemotherapy group, high DOCK2 expression was associated with longer event-free survival (EFS, P=0.001) and overall survival (OS, P=0.007). In the allo-HSCT group, EFS and OS were not significantly different between high and low DOCK2 expression groups. Multivariate analysis showed that high DOCK2 expression was an independent favorable prognostic factor for both EFS and OS in all patients (all P<0.05). In conclusion, our results indicated that high DOCK2 expression, in contrast to DOCK1, conferred good prognosis in AML.

Genetic abnormality is not only the pathogenic basis of acute myeloid leukemia (AML) [1] but also has important prognostic implications. For example, NPM1 mutations and double CEBPA mutations are associated with favorable prognosis in cytogenetically normal AML (CN-AML) [2, 3], while DNMT3A and WT1 mutations are adverse prognostic factors [4, 5].

The dedicators of cytokinesis (DOCK) family, including DOCK1 to DOCK11 proteins, are evolutionarily conserved guanine nucleotide exchange factors (GEF) for the Rho GTPases Rac. It is involved in various pathologies including cancers, immune disorders, and central nervous system diseases [6]. For instance, high DOCK1 expression is an unfavorable prognostic marker in breast cancer and ovarian cancer [7,8], and it induces migration and invasion of malignant cells in lung and brain cancer [9, 10]. Fukui Y et al found that DOCK2 is only expressed in hematopoietic tissues [11]. In addition, DOCK2 is also associated with the development of various cancers [12].

From The Cancer Genome Atlas (TCGA) database (https://cancergenome.nih.gov/), 156 AML patients with DOCK2 expression data were enrolled in this study [14]. All patients were between ages 18 and 88, registered between November 2001 and March 2010, were selected from a set of more than 400 samples to reflect a realworld distribution of subtypes. Eighty-five patients were treated with chemotherapy alone, and other 71 received allo-HSCT. Patients treated with chemotherapy alone were defined as the chemotherapy group; patients who underwent allo-HSCT were defined as the allo-HSCT group. Then, each group was divided into two subgroups by the respective median DOCK2 expression levels. All clinical and molecular information including DOCK2 expression levels were publicly accessible from the TCGA website. All patients provided written informed consent and the research was approved by the Human Research Ethics Committee of Washington University. Primary endpoints were event-free survival (EFS) and overall survival (OS). EFS was defined as the time from diagnosis to removal from the study due to the absence of complete remission, relapse or death or was censored at the last follow-up. OS was defined as the time from diagnosis to death or was censored at the last follow-up.

The clinical and molecular characteristics of patients were summarized using descriptive statistics. The Mann-Whitney U test and the chi-square test were used to compare continuous and categorical data, respectively. EFS and OS were estimated with the Kaplan-Meier method and compared using the log-rank test. Cox proportional hazard model was constructed for EFS and OS to identify possible prognostic factors among the clinical and molecular variables. All statistical analyses were performed by SPSS software 20.0 and GraphPad Prism software 5.0. For all statistical analyses, P-values were two-sided and P<0.05 was considered significant.

Comparison of EFS and OS between different expression levels of Dock1-11 based on chemotherapy.

Clinical and molecular characteristics of patients according to DOCK2 levels 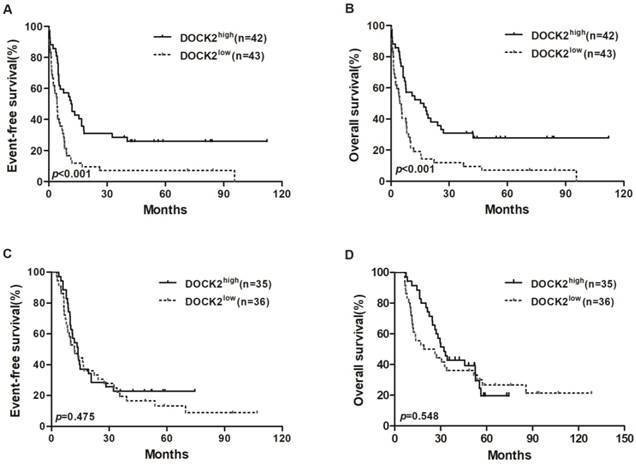 Prognostic value of DOCK2 in AML

In the chemotherapy group, high DOCK2 expressers had longer EFS and OS (all P<0.001; Figure 1A and 1B) than low expressers, but survival was not significantly different between DOCK2 high and low expression subgroups in the allo-HSCT group (Figure 1C and 1D).

Multivariate analyses for EFS and OS based on chemotherapy

Multivariate analyses for EFS and OS based on allo-HSCT.

Multivariate analyses for EFS and OS based on chemotherapy and allo-HSCT.

Previous researches have demonstrated that TP53 mutation and older age were negative prognostic factors in AML [15,16], while CBFβ-MYH11 was associated with favorable prognosis in AML [17]. Our study found that in high DOCK2 expression patients, there were more good-risk patients, more CBFβ-MYH11, and fewer TP53 mutations, suggesting that high expression of DOCK2 was more likely to co-exist with CBFβ-MYH11 rather than TP53 mutations. In the chemotherapy group, the survival analysis indicated that high DOCK2 expression was a favorable factor for EFS and OS, but it not in the allo-HSCT group, suggesting that the unfavorable effect of low DOCK2 expression might be overcome by allo-HSCT.

DOCK2 has been shown to be a specific Rac activator in mature lymphocytes [18]. It is involved in neutrophil chemotaxis [19] and NK cells differentiation [20]. Previous study found that DOCK2 plays a key role in the regulation of cell proliferation in diffuse large B cell lymphoma and follicular lymphoma via the ERK signaling pathway [21]. Nishihara H et al found that DOCK2 is associated with CrkL and regulates Rac1 in human leukemia cell lines [22]. Another study revealed that DOCK2 regulates CXCR4 signaling in immature hematopoietic cells [23]. In the present study, DOCK2 was associated with "neurotrophin TRK receptor signaling pathway", "neurotrophin signaling pathway", "appendage morphogenesis". We speculate that DOCK2 may play a prognostic role in leukemia by interacting with genes in these functional pathways.

A previous study suggested that knocking down DOCK2 could sensitize FLT3-ITD leukemic cells to cytarabine treatment through the inhibition of Rac1 pathway [24], whereas in this study, we observed a favorable prognostic impact of high DOCK2 expression in AML patients. This discrepancy might be related to the different research objects of the two studies, since we did not specifically study AML patients with FLT3-ITD.

DOCK2 may play different roles in the lymphoid and myeloid system [21]. This is similar to LEF1. High LEF1 expression has been reported as a favorable prognostic factor in CN-AML [25], but it is also an adverse prognostic factor in adult B-precursor acute lymphoblastic leukemia [26]. Low expression of DOCK2 is associated with poorer prognosis in colorectal cancer [27]. However, the expression level of DOCK2 is positively correlated with the proliferation rate of CXCL13-induced prostate cancer cells [28]. We theorized that DOCK2 had tissue-specific effects in different malignancies.

In summary, two of the 11 members of the DOCK family have prognostic significance in AML. DOCK1 has adverse prognostic effect and DOCK2 the opposite. This finding may further deepen the risk stratification system of AML.