HIF-1α (hypoxia-inducible factor-1α) is a transcriptional factor that participates in the regulation of oxygen homeostasis. Despites numbers of case-control studies working on this area, the actual relationship of HIF-1α gene generic variant rs11549465 C>T imposing on cancer susceptibility remains unveiled. To get a better understanding of such relationship, this meta-analysis was carried out by incorporating all eligible case-control studies. Qualified articles were acquired from PubMed, CNKI, EMBASE, PMC, and Wanfang database update to April 2019. Odds ratios (ORs) and their corresponding 95% confidence intervals (CIs) were employed to estimate the relationship of interest. Heterogeneity tests, sensitivity analyses and publication bias assessments were also carried out to ensure the strength of our conclusion. A total of 46 articles with 49 studies including 12920 cases and 13363 controls were included. The results indicated that HIF-1α rs11549465 C>T was significantly related to the increased risk of overall cancer under four genetic models (TT vs. CC: OR=2.06, 95% CI=1.34-3.16; TT vs. CC/CT: OR=2.42, 95% CI=1.60-3.65; CT/TT vs. CC: OR=1.21, 95% CI=1.04-1.40; T vs. C: OR=1.29, 95% CI=1.12-1.48). Furthermore, enhanced cancer risk was detected after stratification by cancer type, ethnicity, the source of controls and HWE. These results suggest that HIF-1α rs11549465 C>T polymorphism may predispose to cancer susceptibility.

Cancer ranks itself the leading causes of death around the world. In 2019, 1,762,450 new cancer cases and 606,880 cancer deaths are projected to occur in the United States. It has become a universal public health issue [1]. The most distinguished feature of cancer, un-controlled cell proliferation being one of them, is that it can assault the other vicinal parts of the body and diffuse to other organs. We refer this process to metastases, and this process could later evolve into a major cause of death from cancer. The exact etiology of carcinogenesis has not been fully verified [2]. More and more evidence point to genetic variation in contributing to the initiation and progression of cancer [3, 4]. However, due to cancer's complexity in nature, with heterogeneity being one of is feature, identification of this susceptibility is still a puzzle for us and most correlation has not been ascertained. On the other hand, during the decades, it has become universally agreed that single nucleotide polymorphisms (SNPs) are a common type of genetic variations that is the most frequently studied in connection with cancer susceptibility and that it consequently can act as the markers of many cancers [5].

Hypoxia possesses a vital role in the maintenance of tumor microenvironments. Hypoxic tumor microenvironment triggers extensive cellular responses, such as angiogenesis, proliferation and invasion [6]. By adjusting the oxygen pressure that results in gene alteration, hypoxia may control tumor cell phenotypes [6]. Hypoxia-inducible factor 1 (HIF-1) is a major transcriptional regulator implicated in homeostasis of oxygen. Koshiji et al. illustrated that HIF-1 leads to genetic instability by restraining the DNA mismatching repair system (MSH2 and MSH6) [7]. HIF-1 is a dimeric protein complex that possesses two components known as α and β subunits [8]. Studies have demonstrated that HIF-1α plays a vital role in activating various genes that is significantly involved with cell adhesion, erythropoiesis, angiogenesis and glucose transportation in the process of cancer development and progress [9].

We systematically searched EMBASE, PubMed, PMC, Wanfang and CNKI to retrieve relatively pertinent publications based on case-control studies (update to March 18, 2019). No language restriction is made for this analysis. The search terminology involved were as listed: 1) hypoxia-inducible factor-1 or HIF-1α or rs11549465 or 1772 C>T; 2) SNPs or polymorphisms or polymorphism or variants; 3) cancer or carcinoma or neoplasm or tumor. To acquire all qualified publications, we also reviewed the references of the selected studies.

Impertinent and irrelevant studies were excluded on primary stage. Elimination criteria were: if 1) the study population was not mapped out; 2) it is not case-control study; 3) lack of information in allele frequency. Other than that, editorials, reviews and meta-analysis were ruled out. Only case-control studies with detailed number of different genotypes for estimating odds ratios (ORs) with 95% confidence intervals (CIs) were taken into the final analysis.

Two authors (Hu-Nian Li and Ting He) were arranged to extract information of all the articles respectively. Items listed below were extracted from every single study: 1) authors name; 2) publication year; 3) ethnicity of the study subject; 4) cancer type; 5) allelic frequency; 6) quality score. Studies with scores ≤9 were of low quality, whereas those with scores >9 were of high quality [12, 13]. All the disputable parts were compromised by discussion before consensus was made finally.

We first performed Hardy-Weinberg equilibrium (HWE) for the controls utilizing the goodness-of-fit test. Homozygous model, heterozygous model, recessive model, dominant model, and allele model were employed to determine the relationship between HIF-1α rs11549465 C>T polymorphism and cancer risk by calculating ORs with the corresponding 95% CIs. Moreover, we conducted the stratification analysis by ethnicity, cancer type, source of control, and HWE in controls. We also used Chi square-base Q-test to gauge the presence of heterogeneity. The fixed-effect model was used to compute the pooled OR, given the studies were confirmed to be homogeneous (P>0.10 for the Q test). Or the random-effect model should be used instead. Sensitivity analysis was undertaken on the base of re-calculation of the ORs and 95% CIs by excluding each study individually. In order to detect the presence of publication bias, Begg's funnel plot and Egger's linear regression were adopted simultaneously. We also performed the trial sequential analysis (TSA) to avoid the random errors caused by repeated significance testing and dispersed data [13]. Version 11.0 STATA (Stata Corporation, College Station, TX) was selected to generate all statistical analysis. All the statistics were two-sided with P value <0.05 as a baseline significant finding.

The study workflow was graphically displayed in Figure 1. We first collected 196 articles of the interest by a comprehensive search in the above-mentioned databases. After a basic check-up on articles relevance and abstracts conciseness, 156 articles were ruled out, which left us a total of 40 articles for full text assessment. To expand its sample size to ensure statistical representativeness, we identified another 6 articles from retrieve studies, quantity adding up to 46 articles in total [14-59]. Ultimately, 46 articles with 49 studies were contained in this analysis. A total of 12920 cases and 13363 controls was enrolled into this study for analyzing (Table 1).

The main flowchart of this work. 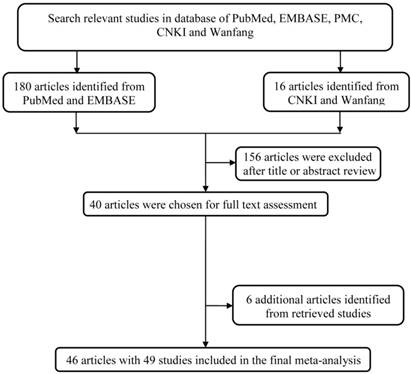 When it comes to the stratification analysis by the ethnicity, significant increased risk was detected in Asians, Caucasians and mixed population. In terms of source of controls, either population-based controls or hospital-based controls were associated with the increase risk of cancer. Further subgroup analysis by HWE in controls revealed that no significant correlation was observed in subgroup of HWE≤0.05. As regard to the quality of publications, significant increased risk was detected in high-quality and low-quality publications.

The Q test (P<0.001) implied an existence of heterogeneity under all the genetic models. Thus, we adopted a random-effect model to produce ORs and 95% CIs. In addition, the sequential sensitivity analysis was performed to give an evaluation of the impact of a sole study on the pooled estimation. Given the attempt of omitting in each study incurred no statistical fluctuation of the pooled ORs, we have reason to believe that the meta-analysis's data is of great reliability (Figure 3).

From the shape of the Begg's funnel plot shown in Figure 4, no evidence of asymmetry was found. Egger's test's statistics also gives no evidence of publication bias among the studies.

The TSA showed that the cumulative z-curve did not cross both the traditional threshold and the TSA threshold, yet the accumulated information was sufficient, indicating that no further evidence was needed to verify the conclusion (Figure 5).

Main characteristics of included studies in the meta-analysis

Forest plot for the correlation between the HIF-1α rs11549465 C>T polymorphism and cancer susceptibility under the allele comparison model. The horizontal lines represent the study-specific ORs and 95% CIs. The diamond represents the pooled results of OR and 95% CI. 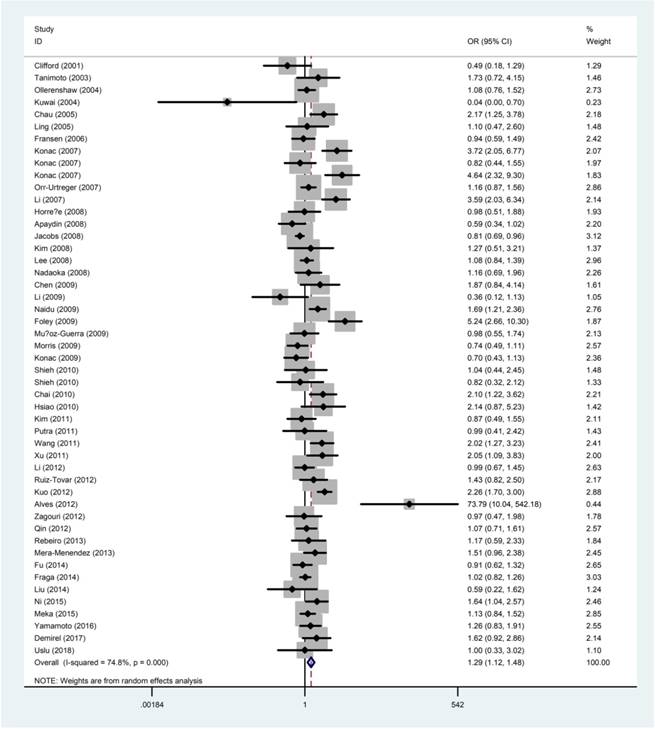 Sensitivity analysis of the association between HIF-1α rs11549465 C>T and cancer susceptibility. Each point represents the recalculated OR after deleting a separate study. 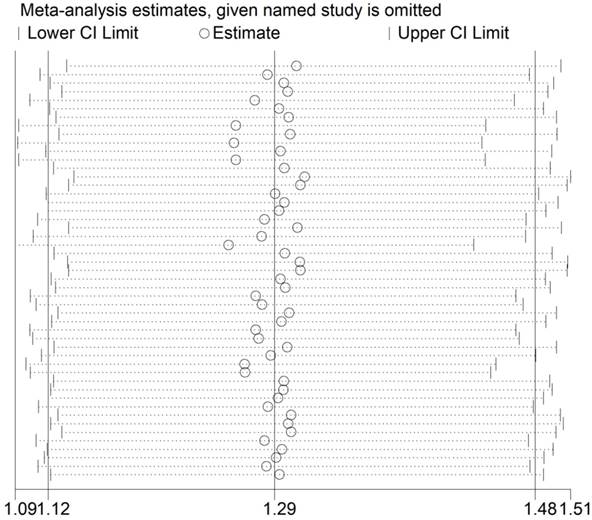 The HIF-1α gene is located at chromosome 14q21-24. HIF-1α regulates the expression of hundreds of genes which moderates the vital cellular functions like proliferation, apoptosis, angiogenesis, glucose metabolism, erythropoiesis, and iron metabolism [60]. Due to the complex functional mechanism and regulatory roles of HIF-1a in hypoxic stress, the possible role of HIF-1a gene SNPs in cancer susceptibility has evoked intensive investigation. The most broadly studied HIF-1α polymorphism rs11549465 C>T (Pro582Ser) could induce proline-to-serine amino acid substitutions. However, the exact role of rs11549465 C>T polymorphism in cancer risk obtained from different studies remain inconclusive. 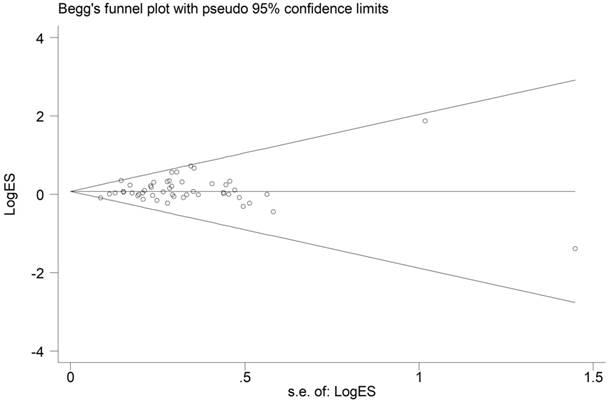 The required information size to demonstrate the correlation between HIF-1α rs11549465 C>T polymorphism with cancer susceptibility. The solid blue line is the cumulative Z-curve. The dashed inward-sloping line to the left represents the trial sequential monitoring boundaries. 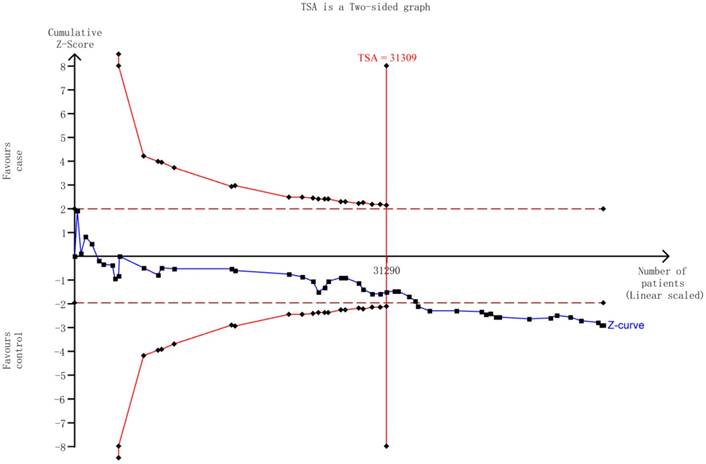 In the current meta-analysis, we undertaken many measurements to increase the credibility of our conclusion. First and foremost, we included as many as qualified studies to expand the analyzed sample size, by incorporating studies not only pressed in English but also in Chinese. Second, we adopted the sensitivity analysis and the publication bias. However, several limitations could not be settled down. First, between-study heterogeneity exists, which might weaken the persuasiveness of the conclusion. Second, the relationship strength was only assessed by use of unadjusted estimates. Lacking original data, such as environment factor, adjustment analysis was absent. Third, most of the included studies were conducted among Asians and Caucasians. The lack of other ethnicities, such as Africans, compromised the generalization of the conclusion.

In a word, our finding has come to a fruition that HIF-1α rs11549465 C>T polymorphism was significantly related to an increase in cancer risk. Our work no doubt will encourage more dedication into further elucidation of the etiology of cancer predisposition. However, with limited sample size of subgroup analysis, we must admit that this analysis is imperfect and thus in the future more case-control studies should be conducted with a larger size of samples.

H.L. and W.Y. conceived and designed the study; H.L. and T.H. collected articles and extracted information; H.L., Y.Z., F.D. and J.L. analyzed the data and prepared the tables and figures; H.L., T.H. and W.Y. wrote the manuscript. All authors read and approved the manuscript.

23. Orr-Urtreger A, Bar-Shira A, Matzkin H, Mabjeesh NJ. The homozygous P582S mutation in the oxygen-dependent degradation domain of HIF-1 alpha is associated with increased risk for prostate cancer. Prostate. 2007;67:8-13