Objective: Cancer-associated systemic inflammation response and hyperfibrinogenemia play crucial roles in cancer progression and prognosis. In this study, we assessed the clinical value of the preoperative fibrinogen and the neutrophil-lymphocyte ratio (NLR) in patients with adenocarcinoma of the esophagogastric junction (AEG) and upper gastric cancer (UGC).

Methods: Patients with AEG or UGC who underwent curative surgery were divided into a training set (n=161) and a validation set (n=195). Univariate and multivariate Cox analyses were performed to evaluate the prognostic indicators for overall survival (OS). The optimization cut-off values for fibrinogen and the NLR were 3.09g/L and 1.84, respectively. The combination of fibrinogen and NLR (F-NLR) was 2 for patients with high fibrinogen (≥3.09g/L) and elevated NLR (≥1.84), whereas those with one or neither were indexed as 1 or 0, respectively.

Conclusions: The preoperative F-NLR score is an independent prognosis indicator for patients with AEG and UGC. And it may help clinicians to identify those patients who at high prognostic risk and will benefit from planning individualized treatment strategies.

Gastric cancer is one of the common aggressive malignant tumors, with a high ratio of tumor recurrence and mortality [1, 2]. According to the position of the main tumor, gastric cancer is classified into upper, middle or lower third cancers. Although the pathological characteristics are similar, the position of tumor has an influence on the postoperative quality of life and survival of gastric cancer patients. Adenocarcinoma of the esophagogastric junction (AEG), is a representative malignancy located between the esophagus and stomach, and was originally characterized by Siewert [3]. It was well-known to have unique clinicopathological features and biological behavior. In recent decades, the incidence rate of AEG gradually rose globally, particularly in the western countries [4, 5]. AEG and upper gastric cancer (UGC) patients undergo surgery, a total gastrectomy is usually required. Recent researches have reported that distal gastrectomy provide a better long-term outcome for distal gastric cancer patients compared with total gastrectomy [6, 7]. Besides some studies have indicated that the prognosis for AEG is worse compare with distal gastric cancer patients [8]. Therefore, it is important to search suitable clinical prognostic factors to supply more accurate and precise evaluates of survival, extremely important in high-fatality malignancies such as AEG. This can both enhance outcomes and decrease costs by better choosing patients for eligible treatment [9].

Cancer-related systemic inflammatory response plays an important role in the progression and outcome of tumors [10, 11]. We previously reported that systemic immune-inflammation score SII (SII=N×P∕L), which was based on neutrophil (N), platelet (P) and lymphocyte (L) counts, had been demonstrated to be a predictive prognostic indicator in patients with advanced gastric cancer undergoing neoadjuvant chemotherapy [12]. Also, several common inflammation-based prognostic scoring systems, such as the neutrophil-lymphocyte ratio (NLR), platelet-lymphocyte ratio (PLR) and lymphocyte-monocyte ratio (LMR) have been reported to have prognostic value in various cancers [13-16]. In addition, the hemostatic also plays a key role in cancer progression and metastasis [17, 18]. Liver-produced fibrinogen is a key factor in the hemostatic cascade. Recent studies have confirmed that fibrinogen correlates with cancer progression, poor response to chemotherapy and adverse prognostic outcome in various malignancies [19-21]. Recently, several researches analyzed a new scoring system, that is, combining preoperative fibrinogen and the NLR (F-NLR). F-NLR has been demonstrated to be a significant prognostic marker in several types of cancers, such as non-small cell lung cancer, esophageal squamous cell carcinoma and gastric cancer [22-24].

Therefore, the current study aimed to evaluate the prognostic value of F-NLR in patients with AEG and UGC.

Two independent cohorts comprising 356 consecutive patients with AEG or UGC who underwent curative surgery were enrolled into the present retrospective study from Harbin Medical University Cancer Hospital. The training set that included 161 consecutive patients was collected between 2007 and 2011, and the validation set that included 195 consecutive patients was collected between 2012 and 2016 with the same enrolment criteria. The patients enrolled this analysis met the following inclusion criteria: 1) pathologically confirmed adenocarcinoma, 2) no neoadjuvant chemotherapy and/or radiotherapy before operation, 3) complete clinicopathologic parameters and outcome. The major exclusion criteria included: 1) multiple primary malignances, 2) hematological disease, bone marrow disease and autoimmune disease, 3) active infection or other inflammatory disease for nearly 1 month before surgery, 4) death within perioperative period. The Siewert classification was introduced to about tumor position [3]. According to previous published reports, [25, 26] AEG was well- defined as Siewert type I, II, and III tumors and tumors with the center was situate exceed 5 cm below the gastroesophageal junction within the upper one third stomach as UGC. Clinicopathological parameters and laboratory inspections of the patients were acquired from the medical records, including sex, age, tumor size, tumor location, histologic differentiation, surgical procedure, pTNM stage and blood cell count. The pTNM stage was according to the 8th TNM classification of American Joint Committee on Cancer (AJCC) staging manual. Permission for this retrospective cohort research was approved by the ethics committee of Harbin Medical University Cancer Hospital.

Hematological laboratory measurements including neutrophil count, lymphocyte count, monocyte count and fibrinogen concentrations, were extracted from the daily blood test administered in the week before surgery. According to the Youden index by Receiver operating characteristic (ROC) curve, the most appropriate cutoff threshold was found as 3.09g/L for plasma fibrinogen and 1.84 for NLR in the training cohort, and was then applied to the validation cohort. For these values, an area under the curve (AUC) as 0.650( 95%CI: 0.565-0.735) and 0.615(95% CI:0.527-0.702), respectively. Similarly, the optimal cutoff values of 110, 451 and 3.25 for PLR, SII and LMR also determined by ROC curve. Based on these cut-off values, the F-NLR score was classified as follows: F-NLR score of 2 [both a hyperfibrinogenemia (≥3.09g/L) and high NLR (≥1.84)], 1 [either hyperfibrinogenemia (≥3.09g/L) or high NLR (≥1.84)], 0 [neither hyperfibrinogenemia nor high NLR].

Statistical analysis was done using SPSS software version 22 (IBM, Armonk, New York, USA). A two-tailed chi-squared test and Spearman-rho test was used to evaluate differences in categorical variables. Differences between the overall survival (OS) generated by the Kaplan-Meier curves were decided using the log-rank test. OS was defined as the time in months between the date of surgery and the date of death or last follow-up. Univariate and multivariate analyses were carried out by Cox regression models to clarify the independent prognostic factors. Prognostic value and accuracy of the F-NLR prognostic models was assessed by receiver operating characteristic (ROC) analysis. All P values were quoted two-sided, and a P value of <0.05 was considered to represent statistically significant.

Due to the limitation of patient number, we combined the training and the validation cohorts to the combined cohort. The relationship between F-NLR and clinicopathological variables is shown in Supplementary Table S1. There was significant correlation of F-NLR with tumor size, PLR, LMR and SII in all 3 cohorts.

Prognostic analysis based on plasma fibrinogen, NLR or F-NLR

We conducted the Kaplan-Meier analysis and log-rank test to determine the survival differences between the groups categorized by fibrinogen, NLR or F-NLR. Patients with hyperfibrinogenemia had a much worse OS than those with low fibrinogen (P<0.001 in all 3 sets; Figure S1A-C). Patients with increased NLR had a poorer OS than those with low NLR (P=0.005 in the training set; P=0.014 in the validation set; P<0.001 in the combined set; Figure S1D-F, respectively). Furthermore, further analysis showed that plasma fibrinogen had a positive and significant correlation with NLR (Table S2).

Extension and accuracy of prognostic models with FNLR 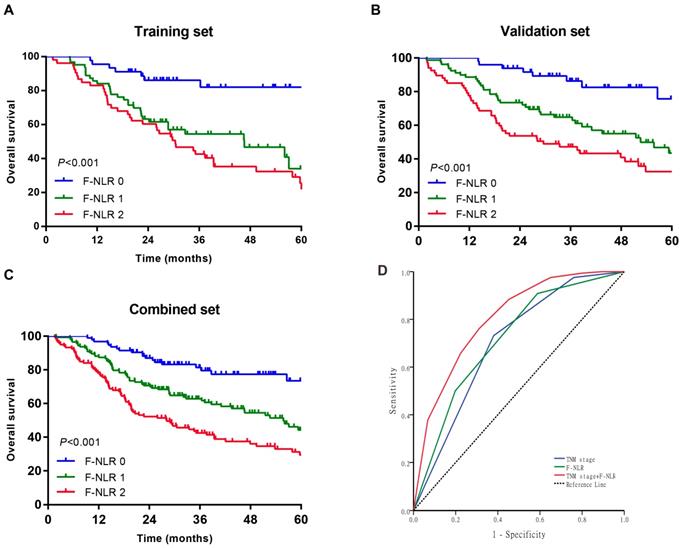 Although with the rapid developments in surgical techniques and adjuvant treatments, the median survival of gastrointestinal malignancies remains unsatisfactory [27]. A proper prognostic factor can allow patients with tumors to have an appropriate risk classification and allow for the adequate treatment to be assigned. Cancer progression and prognosis are not just determined by clinical and pathological features of the tumor. Personalized factors can also play a central role in estimate of survival. In our current retrospective study, we investigated the prognostic value of F-NLR score and the relationship between F-NLR and clinicopathological features in the patients with pTNM stages I-III AEG and UGC. 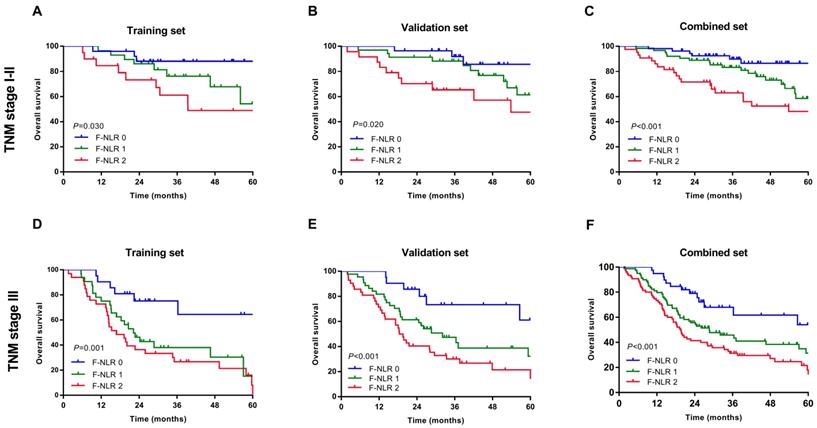 Inflammation and immune cells are essential components of the tumor microenvironments. By creating a favorable microenvironment and inhibiting anti-tumor immunity, systemic inflammatory responses of tumor cells are important in tumor growth, progression and metastasis [28]. A growing of evidence suggests that systemic inflammation responses are key prognostic indicators [29, 30]. The systemic inflammatory response disrupts balance of circulating white blood cell components [31]. Thus, it affects the number of neutrophils and lymphocytes in leukocyte during cancer progression. The neutrophil- lymphocyte ratio (NLR) has been recognized as a representative prognostic indicator in various malignancies, including gastric cancer [32-34]. 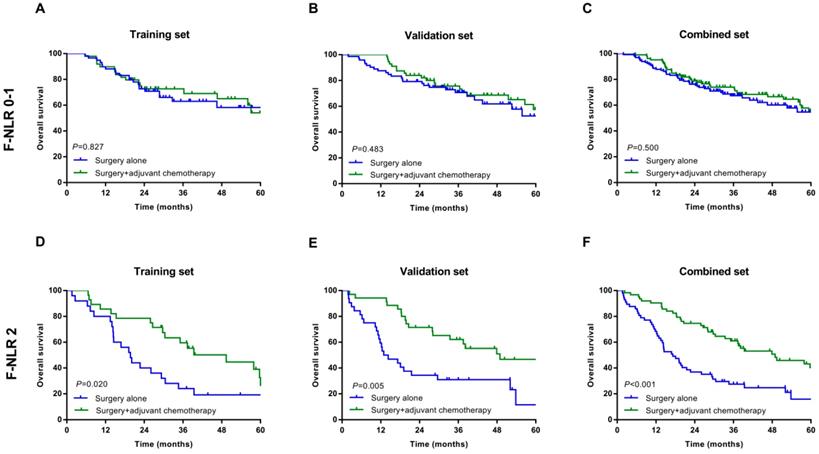 In addition, more and more studies have demonstrated that the association between haemostatic system and cancer progression in recent years [17, 18]. Increasing evidence performs that the activation of the haemostatic cascade plays a crucial pathophysiological role in tumor aggressiveness [35]. Fibrinogen is a main acute-phase protein and as an important component of the haemostatic system, has been shown to be a necessary regulator of the systemic inflammatory state and malignancy progression [36].It may mediate the original adhesion of white blood cells to endothelial cells and the release of pro-inflammatory cytokines, thus induce cancer cell proliferation and progression [37]. Hyperfibrinogenemia has been confirmed to be a significant prognostic predictor with tumor progression and poor response to chemotherapy in various malignancies [19-21].

Therefore, the combination serum fibrinogen and NLR (F-NLR) provides a good prognostic marker for cancer patients. Fibrinogen alone or NLR may have a limited effect on tumor progression. F-NLR increases the adverse effects of fibrinogen and NLR, ultimately increasing the predictive significance of cancer patients. Recently, the prognostic value of F-NLR was further demonstrated in various studies. Huang et al [22], proved that preoperative F-NLR scores can be a valuable prognostic marker for patients with early resectable non-small cell lung cancer. Kijima et al [23], reported that the F-NLR score is promising to be a predictor of therapeutic effects and prognosis in patients undergoing esophagectomy for advanced esophageal squamous cell carcinoma. Liu et al [24], demonstrated that F-NLR score independently predicts outcomes of patients with gastric cancer underwent curative surgery, consistent with the findings of our study. In the current study, we proved F-NLR as an independent prognostic factor for OS in AEG and UGC patients and integrated it into the pathological TNM staging system to improve its prognostic value. When the patients with different pathological TNM stages were analyzed separately, the F-NLR score still displayed potential prognostic value. Furthermore, we also found that the high-risk patients according to F-NLR 2 may benefit from postoperative adjuvant chemotherapy. Thus, to evaluate the pathological situation of tumor progression, preoperative FNLR levels counted from blood samples should be assessed. The fact that F-NLR score can be obtained from the routine blood sample makes it practical and inexpensive.

This study had several shortages. First of all, this study was a single institute, retrospective analysis and could not avoid the bias in population selection. Second, although we restricted some possible mixed factors, the hematologic cell counts can be influenced by several factors. Third, we were short of the follow-up information for disease-free survival, and our conclusions may be reinforced by using other methods of survival.

The preoperative F-NLR score is an independent predictor of survival in patients who underwent curative surgery for AEG and UGC. As it is objectively measured and daily available, which may be a useful clinical biomarker for identifying patients at high prognostic risk and planning individualized treatment strategies for patients with AEG and UGC.

We thank Sen Li , Yongle Zhang and Ziyu Zhu for their excellent technical assistance. We thank Yimin Wang and Shubin Song for data collection and analysis. We thank Yan Ma and Rui Xie for fruitful help.

All programs followed were according to the ethical standards of the Human Subjects Responsibility Committee (institutions and countries), as well as the 1964 Helsinki Declaration and subsequent editions. This research was approved by the Ethics Committee of the Harbin Medical University Cancer Hospital.