Ten-eleven translocation (TET) enzymes are implicated in DNA demethylation through dioxygenase activity, which converts 5-methylcytosine to 5-hydroxymethylcytosine (5-hmC). However, the specific roles of TET enzymes and 5-hmC levels in head and neck squamous cell carcinoma (HNSCC) have not yet been evaluated. In this study, we analyzed 5-hmC levels and TET mRNA expression in a well-characterized dataset of 117 matched pairs of HNSCC tissues and normal tissues. 5-hmC levels and TET mRNA expression were examined via enzyme-linked immunosorbent assay and quantitative real-time PCR, respectively. 5-hmC levels were evaluated according to various clinical characteristics and prognostic implications. Notably, we found that 5-hmC levels were significantly correlated with tumor stage (P = 0.032) and recurrence (P = 0.018). Univariate analysis revealed that low levels of 5-hmC were correlated with poor disease-free survival (DFS; log-rank test, P = 0.038). The expression of TET family genes was not associated with outcomes. In multivariate analysis, low levels of 5-hmC were evaluated as a significant independent prognostic factor of DFS (hazard ratio: 2.352, 95% confidence interval: 1.136-4.896; P = 0.021). Taken together, our findings showed that reduction of TET family gene expression and subsequent low levels of 5-hmC may affect the development of HNSCC.

Head and neck squamous cell carcinomas (HNSCCs) are heterogeneous diseases that involve multiple sites and cellular origins within the upper aerodigestive tract [1]. Despite aggressive multimodal treatment, survival for patients with HNSCC remains poor. Nevertheless, some patients survive much longer than expected [2]. Therefore, identification of prognostic biomarkers as clinical or biological characteristics that provide information on the likely health outcomes of patients, irrespective of the treatment, is essential [3, 4]. In HNSCC, epigenetic inactivation associated with tumor-suppressor genes (TSGs) is more frequent than somatic mutations and may drive tumorigenic and progression potential [5-7]. Aberrant gene promoter methylation is a key event in cancer development and has attracted increasing interest in basic and translational oncology studies because of the induction of reversible chemical modifications [8, 9].

Enzymes of the ten-eleven translocation (TET) family catalyze the stepwise oxidation of 5-methylcytosine (5-mC) in DNA to 5-hydroxymethylcytosine (5-hmC) and further oxidation products, not only generating new epigenetic marks but also initiating active or passive demethylation pathways [10]. Although tissue- and cell type-specific variations occur, it has been estimated that approximately 5% of all cytosines in the genome of mammalian cells are marked as 5-mC, and less than 1% are marked as 5-hmC. Moreover, 5-formylcytosine (5-fC) and 5-carboxylcytosine (5-caC) are 10-1000-fold less abundant than 5-hmC [11, 12]. Accordingly, 5-fC and 5-caC may simply be short-lived intermediates in the active demethylation process, whereas 5-hmC may be an active epigenetic mark that is stably maintained [13]. TET family proteins can convert 5-mC to 5-hmC, which is widely accepted as the sixth base in the mammalian genome, following 5-mC, the fifth base [14, 15]. The few clinical investigations that examined global DNA hydroxymethylation in relation to HNSCC have used genomic DNA from tumors.

Missense and truncating mutations in TET genes are present in nearly all solid tumor types at a relatively low frequency [16]. In the Cancer Genome Atlas cohort of HNSCC, TET1, TET2, and TET3 mutations were identified in nine (1.8%), eight patients (1.6%), and eight patients (1.6%) of 510 patients, respectively [17]. Our report indicated that TET mRNA is downregulated in HNSCC owing to DNA methylation; this may be a critical event in HNSCC progression. In particular, TET3 methylation confers HNSCC with unique clinicopathological features [18].

Recent studies have shown that aberrant levels of TET genes and 5-hmC are associated with tumorigenesis in different types of cancers [19]. In a number of cancers, 5-hmC has been shown to be markedly decreased and associated with tumorigenesis, progression, and outcomes [20]. Simultaneous analyses of 5-hmC and TET genes are important for predicting tumorigenesis and biological behaviors and for the development of future targeted therapies for HNSCC. However, systematic studies of the epigenetic and transcriptional regulation of 5-hmC and TET genes in HNSCC are still needed.

Accordingly, in this study, we compared the 5-hmC profiles between normal mucosa and HNSCC tissues and characterized the associations between 5-hmC and HNSCC tumorigenesis, progression, and outcomes.

In total, 117 primary HNSCC samples were obtained from patients during surgery at the Department of Otolaryngology, Hamamatsu University School of Medicine. All patients provided written informed consent, and the study protocol was approved by the Institutional Review Board of the Hamamatsu University School of Medicine (date of board approval: 2 October 2015, ethic code: 25-149). Clinical information, including age, sex, alcohol exposure, smoking status, tumor size, human papilloma virus (HPV) status, tumor size, lymph node status, stage, and recurrence, were obtained from the patients' clinical records.

The genomic DNA from 117 primary tumors and noncancerous mucosa was extracted using a QIAamp DNA Mini Kit (Qiagen, Hilden, Germany) according to the manufacturer's instructions. The 5hmC content of genomic DNA was determined with a Quest 5-hmC DNA ELISA Kit (Zymo Research, Irvine, CA, USA), according to the manufacturer's instructions. Assays were performed using 4 μg/mL anti-5-hmC polyclonal antibodies, loading 200 ng of DNA per well. Absorbance at 430 nm was evaluated using a SynergyH1 microplate reader and Gen5 software (BioTek, Winooski, VT, USA). The amount of 5-hmC was calculated as a percentage based on a standard curve generated using kit controls.

The 5-hmC and TET mRNA levels in tumors and normal mucosa and patient characteristics were analyzed statistically. Receiver-operator characteristic (ROC) curve analyses were performed for 5-hmC and TET mRNA levels and all patients for comparisons between tumor and normal tissues. DFS was measured from the date of the initial treatment to the date of diagnosis. Kaplan-Meier tests were used to calculate survival probabilities, and log-rank tests were used to compare survival rates. The prognostic value of methylation status was assessed by performing multivariate Cox proportional hazards analysis adjusting for age (≥ 65 versus < 65 years), sex, smoking status, alcohol intake, and tumor stage (I, II, and III versus IV). A p-value less than 0.05 was considered statistically significant. Statistical analyses were performed using StatMate IV software (ATMS Co. Ltd., Tokyo, Japan) and the Stata/SE 13.0 system (Stata Corporation, TX, USA). 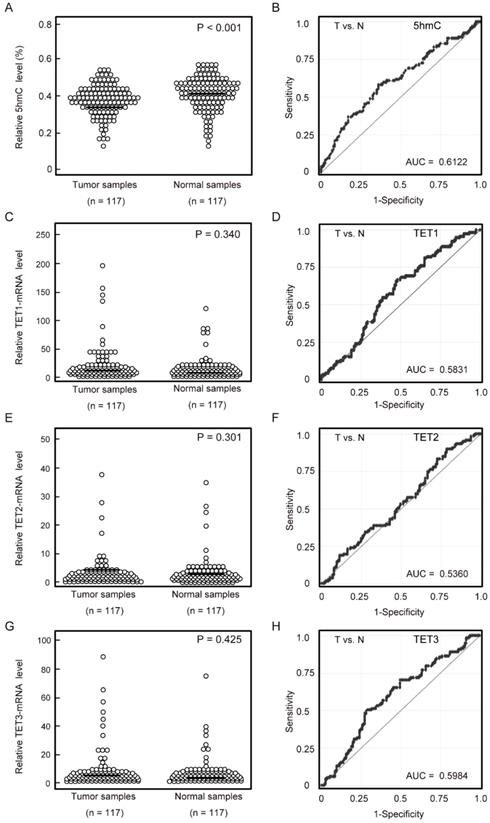 Comparison of 5-hmC levels and TET expression in HNSCC tissues

To identify factors affecting 5-hmC levels in HNSCC, we compared 5-hmC levels among the number of highly expressed TET genes and tumor sites of HNSCC. One or more TET high-expression events were associated with a significant increase in 5-hmC levels compared with no TET high-expression events (P < 0.05). The 5-hmC level showed the greatest increase when all three TET genes showed high expression (P < 0.001; Figure 3A). Moreover, in a comparison of 5-hmC levels at tumor sites among HNSCC, 5-hmC levels were found to be significantly higher in patients with oropharyngeal cancer than in patients with larynx (P = 0.019), oral cavity (P = 0.029), and hypopharynx (P = 0.009) cancer (Figure 3B).

Association of 5-hmC levels and TET expression with clinicopathological assessment

Among the 117 patients, differences in 5-hmC levels and TET1, TET2, and TET3 mRNA expression statuses according to clinical information were examined using Chi-squared tests (Table 1). The characteristics of patients with HNSCC are shown in Table S1. We found that 5-hmC levels were associated with clinical stage (P = 0.032) and recurrence (P = 0.018). Other clinical information, including age, sex, alcohol exposure, smoking status, tumor size, HPV status, tumor size, and lymph node status, was not related to 5-hmC levels. Smoking habit was associated with mRNA expression of TET1 (P = 0.031) and TET2 (P = 0.040). Other clinical information was not related to TET1, TET2, and TET3 mRNA expression (Table 1). Comparison of TET1, TET2, and TET3 mRNA expression in patients with laryngeal cancer, oral cancer, hypopharyngeal cancer, and oropharyngeal cancer are shown in Figure S1. 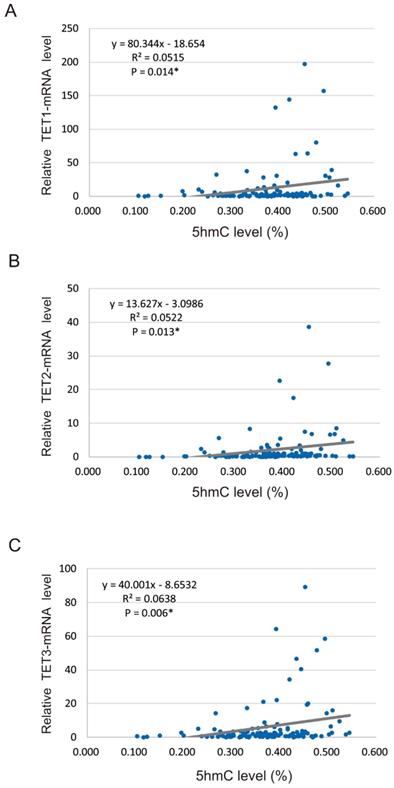 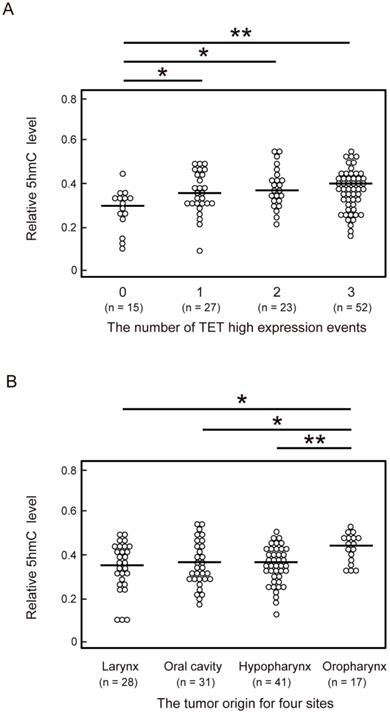 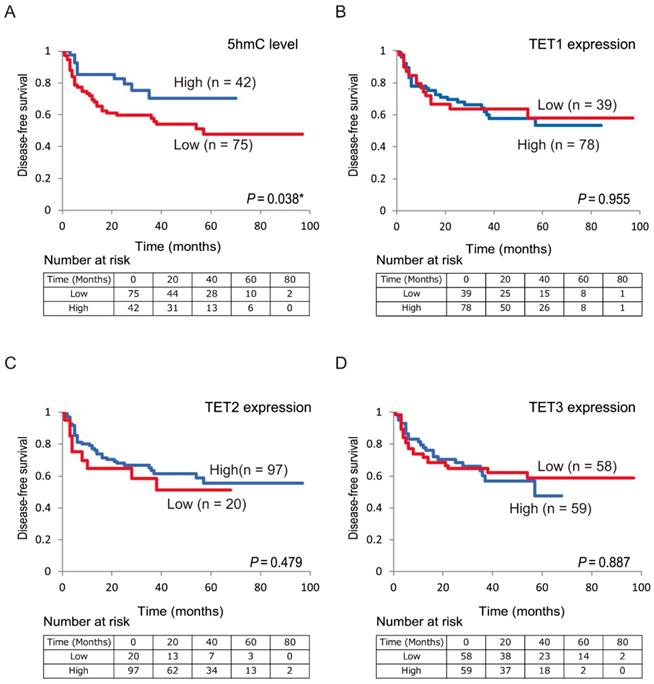 This is the first study examining 5-hmC and TET family gene levels in HNSCC. DNA methylation regulates epigenetic gene inactivation; however, the factors affecting DNA demethylation are still poorly understood in HNSCC. Recently, we showed that concurrent methylation analysis of TET genes was related to reduced DFS in unfavorable event groups [18]. Our current study found that aberrant expression of TET genes and altered levels of 5-hmC were associated with tumorigenesis and that lower 5-hmC levels were correlated with reduced survival. 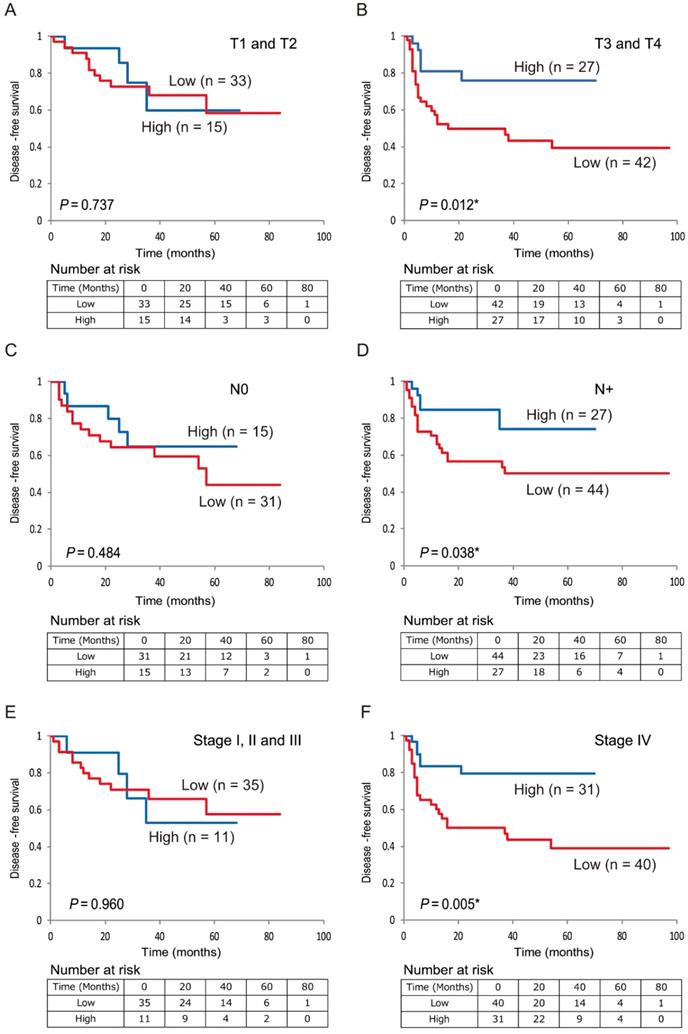 5-hmC is not simply an activating epigenetic mark, but is considered an intermediate in the active demethylation pathway and appears to play complex roles in gene regulation [11, 12]. 5-hmC levels of protein-coding genes are positively correlated with RNA expression intensity [26]. A pathway recently suggested for active DNA demethylation in the early mouse embryo involves the conversion of 5-mC to 5-hmC mediated by TET3, which is expressed at high levels in oocytes and zygotes [27, 28]. Future studies are needed to confirm the associations between 5-hmC and carcinogenesis and to examine potential mechanisms through which 5-hmC loss affects tumor growth.

Bisulfite treatment, the gold-standard technology for detection of DNA methylation, results in the conversion of unmethylated cytosine into uracil, which will be read as thymine after PCR amplification, with both 5-mC and 5-hmC being read as cytosine, cannot distinguish between 5-mC and 5-hmC [29]. Therefore, quantitative analysis of genome-wide distribution of these epigenetic marks has been considered for clinical applications [30]. Immuno-based assays, including dot blots, immunohistochemical assays, and ELISA, have widely been used as a quantitative method due to their analytical merits for analyses of 5-hmC [31]. Several approaches for 5-hmC mapping have been developed in recent years. Cell-free 5-hmC may represent a new approach for liquid biopsy-based diagnosis and prognosis [32, 33]. The 5-hmC profiles of cell-free DNA have been detected in patients with cancer, and 5-hmC gains in both gene bodies and promoter regions have been evaluated in patients with cancer and healthy controls [34]. Further studies of the loss of 5-hmC upon transformation of tissues may offer useful tools for dissecting 5-hmC biology in cancers.

In summary, we demonstrated for the first time that 5-hmC levels were abnormally reduced in patients with HNSCC; this may be a critical event in HNSCC progression. Interestingly, the 5-hmC profiles in primary tumors may be used to identify patients with positive lymph node metastasis and high tumor stage that are at a higher risk of recurrence. Further studies are needed to examine the differences in global demethylation patterns observed between 5-hmC-low and -high tumors and their effects on the onset and progression of HNSCC in more detail.

The authors would like to thank Ms. Yuko Mohri for her excellent technical support.

All samples were obtained with the written consent of patients. The study was approved by the ethical committee of Hamamatsu University School of Medicine (number 16-072).

27. Iqbal K, Jin SG, Pfeifer GP, Szabo PE. Reprogramming of the paternal genome upon fertilization involves genome-wide oxidation of 5-methylcytosine. Proceedings of the National Academy of Sciences of the United States of America. 2011;108:3642-7