Background: The glutathione S-transferase (GST) genes encode enzymes that metabolize carcinogenic compounds, and their variants, GSTP1 (Ile105Val and Ala114Val), GSTT1 (null/present), and GSTM1 (null/present), reduce enzyme activity that may affect the risk of developing cerebral glioma. This study undertook a case-control study and a meta-analysis to evaluate associations between these GST gene variants and the risk of glioma.

Results: Our case-control study found that the frequency of GSTP1 Ile105Val Val/Val genotype was significantly higher in the glioma group than that in the healthy controls (11.7% vs. 6.4%) (OR=1.50; 95% CI=1.05-2.04; P=0.01); the frequency of the Val/Ile + Ile/Ile genotypes was different from glioma patients and controls (88.3% vs. 93.6%) (OR=1.47(1.04-2.10); P=0.015); there were no associations between GSTP1 Ala114Val, GSTT1 (null/present) and GSTM1 (null/present) variants and glioma risk. Our meta-analysis confirmed that the GSTP1 Ile105Val variant was associated with an overall increased glioma risk. Moreover, our meta-analysis also confirmed the GSTP1 Ala114Val and GSTT1 null/present variants were associated with an increased glioma risk in the Caucasian population, rather than the Asian population.

Conclusions: This study showed that GST gene variants were associated with an increased risk of glioma with ethnic differences. Future large-scale, multi center, controlled, prospective studies are required to support these findings and to determine how these GST gene variants may affect the pathogenesis of glioma.

Glioma accounts for approximately 80% of all brain tumors and are associated with poor patient survival [1]. To the best of our knowledge, no environmental carcinogens, apart from ionizing radiation, have been implicated in the etiology of gliomas [2-4]. However, studies in rats demonstrated that brain tumors maybe induced by various carcinogenic substances, such as acrylonitrile, ethylene oxide and acrylamide [5-7]. However, studies in humans reported no definitive association with occupational or environmental exposure and the risk of primary brain tumor [8-10]. Several individuals may be exposed to toxic agents over time. Therefore, some researchers have focused on the polymorphisms in the glutathione-S-transferase (GST) A (GSTM1), u (GSTT1) and k (GSTP1) variants, which have been reported to be associated with the etiology of cerebral tumors [11-23]. These enzymes, as part of the phase II detoxification process, are involved in the metabolism of several electrophilic compounds, including carcinogens, mutagens, cytotoxic drugs and metabolites, and the detoxification of the products of reactive oxidation [24-26].

Due to the inconsistent findings in previously published studies regarding the association with GST gene variants and the risk of glioma, it was deemed necessary to perform a meta-analysis. At this time, there have been several previously published and formally analyzed systematic reviews and meta-analysis of published studies on the GSTP1, GSTM1 and GSTT1 variants and the risk of primary brain tumors, including glioma [1, 2, 38-40]. However, the results of these previous meta-analyses are inconclusive, or have not been updated, or do not include racial subgroup analyses. Therefore, a meta-analysis was performed to specifically investigate the association with GSTP1 (Ile105Val and Ala114Val), GSTT1 (null/present) and GSTM1 (null/present) variants and the risk of glioma that included data from this case-control study of 724 patients combined with other recently published and relevant studies.

The study subjects, including glioma patients and healthy controls, were enrolled from the Xiangya Hospital of Central South University (Changsha, China) between 2006 and 2013. All cases included in this study were histologically confirmed as glioma. The healthy controls were Han Chinese people, with no tumor and normal on physical examination and who were randomly selected from the Medical Examination Center of Xiangya Hospital.

The Chinese Clinical Trial Register approved the clinical study admission (Registration No. ChiCTR-COC-15006186), and the Ethics Committees of the Xiangya School of Medicine and the Institute of Clinical Pharmacology of Central South University approved the study protocol. A standardized questionnaire was used to collect demographic details and clinical data, including patient age, sex, smoking status, and glioma types. All the patients provided written informed consent in compliance with the Code of Ethics of the World Medical Association (Declaration of Helsinki) prior to participating in the study.

The SPSS software for Windows, version 13.0 (SPSS Inc., Chicago, IL, USA) was used for statistical analysis. The Hardy-Weinberg equilibrium was analyzed with the χ2 test. Data on age, sex and other characteristics were compared to glioma patients and healthy controls with the Student's t-test or χ2 analysis. The different distributions of the GSTP1 variants of the two groups were examined by the χ2 test. P<0.05 was considered to indicate statistically significant differences. The meta-analysis was performed using STATA version 12 (Stata Corp, College Station, TX, USA).The significances of the pooled odds ratio (OR) were tested by the Z-test, and P<0.05 was considered to be statistically significant. Heterogeneity was calculated with the χ2 analysis based on the Q-test and I2. If P<0.05 and I2>50% were present, the Mantel-Haenszel random effect model was used, otherwise a fixed effect model was used [42, 43]. Data was combined using fixed-effects models if the heterogeneity was significant. The potential publication bias was assessed using Egger's test and Begg's test.

Demographic and clinical characteristics of the subjects.

Meta-analysis about GSTP1 Ile105Val and Ala114Val variants and glioma risk

There were 7 publications that included 3,265 glioma patients and 1,273 healthy controls that included the GSTP1 Ile105Val variant dominant model (Val carriers vs. Ile/Ile). Because there was heterogeneity (I2=88.7%; P<0.001), a Mantel-Haenszel random-pooling model was used to analyze the published data. The results showed that the distribution of GSTP1 Ile105Val Val variant carriers in glioma and healthy controls showed no difference (OR=0.797(0.495-1.285); P=0.352) (Figure 2b).

Allele and genotype frequencies of the two SNPs in glioma patients (n=384) and healthy controls (n=340).

Selection of studies for inclusion in the meta-analysis. 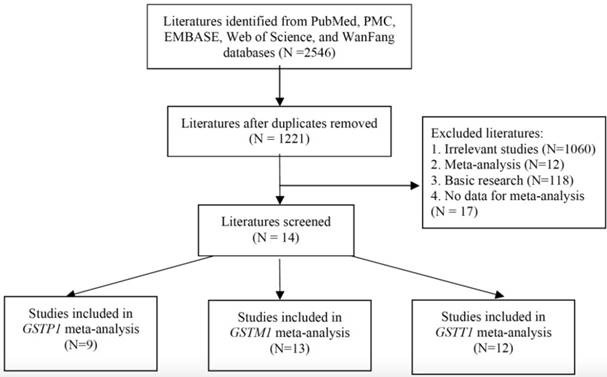 Characteristics of studies included in the meta-analysis.

Meta-analysis of the GSTP1 Ile105Val polymorphism and glioma risk. (a) Val/Val vs. Ile carriers; (b) Val carriers vs. Ile/Ile. CI, confidence interval. 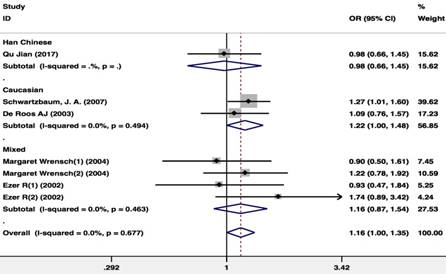 There were 12 publications that included 2,830 glioma patients and 4,429 healthy controls included in the publication analysis that included the GSTT1 (null/present) variant and glioma risk. Because there was heterogeneity (I2=52.5%; P=0.011), a Mantel-Haenszel random-pooling model was used in the analysis. There was no significant association with GSTT1 (null/present) variant and glioma risk in the Caucasian population (OR=1.296(1.023-1.641); P=0.031) (Figure 4b).

Susceptibility genes for the development of glioma have been identified with this study, and the findings are supported by previous studies. It has been previously reported that the rs25489 (Arg280His) and Arg399Gln (rs25487) polymorphisms of the XRCC1 gene may affect the risk of developing glioma in the Chinese population [44]. However, the development of cerebral glioma can only be partly explained by these gene findings, because glioma is a complex tumor, and its development may be associated with susceptibility to multiple genes as well as environmental factors.GST is known to catalyze the detoxification of reactive electrophilic compounds, such as cytotoxic drugs, and GSTs are a large family of cytosolic phase II xenobiotic metabolizing enzymes [45, 46]. GST enzymes are associated with the accumulation of increased amounts of reactive oxygen species, which is a phenomenon involved in carcinogenesis [47]. The individual variability in the GST enzyme activity may lead to different effects of detoxification of potential carcinogens and result in susceptibility to cancer [45, 46]. The enzymes, GSTP1, GSTT1 and GSTM1 are the predominant enzymes in the GST enzyme family, and they have been proposed to play a critical role in protecting the brain from toxic compounds [48, 49]. GSTP1 I105V and A114V and deletions in the GSTM1 and GSTT1 genes could substantially reduce the activity of these protective GST enzymes [1, 32, 33, 35].

It has been previously reported that GSTP1 is associated with susceptibility to other types of malignancy, including prostate cancer[50] and breast cancer [31]. Also, previous studies have shown that polymorphisms of the GSTP1gene may affect the response to chemotherapy and treatment outcome in breast cancer [51], and may also affect epirubicin treatment outcome as well as epirubicin-related toxicity [29]. These findings indicate that the GSTP1 gene is an important gene associated with the development and treatment of cancer.

The results of this study were consistent with those of Qin et al. and Gao et al. both involving the Han Chinese population [11, 37]. In the Qin et al. study, the distribution of rs1695 in GSTP1 allelic frequencies was significantly different from 72 cases of GBM and 302 control cases in the Han Chinese population. Furthermore, rs1695 in GSTP1 decreased the risk of GBM in the log-additive model (OR=0.56; 95% CI, 0.34-0.94; P=0.022) [11]. In the present study, GBM comprised 33.3% of total glioma cases. Gao et al. investigated 301 glioma patients and 302 controls in a case-controlled study and found a positive association between GSTP1 rs1695 and glioma risk. In the present study, Ile105Val GG genotype patients had a 1.5 times increase in risk compared with wild-type patients, and GG genotype patients had a 1.47 times increase in risk compared with AA+AG patients. Furthermore, both the literature review and the analysis undertaken in this study confirmed the positive associations.

Meta-analysis of the association between GSTP1, GSTM1 and GSTT1 variants and glioma risk.

Among the published genome-wide association studies (GWAS) relevant to the literature review and the analysis undertaken in this study, there was no direct information or data that could be applied to this analysis [52-57]. A previous study reported that the GSTP1 gene Ala114Val (rs1138272) polymorphism might be used as a predictive factor for cisplatin-based chemotherapy in osteosarcoma patients [30]. Another study reported that children carrying GSTP1 rs1138272 minor alleles might represent a susceptible population with increased risk of asthma associated with air pollution [58]. These findings suggest that this variant may be involved in oxidative stress, which is a common phenomenon in the development of glioma. However, no association with this polymorphism with the risk of glioma was observed in the present study. However, meta-analysis undertaken in this study showed that GSTP1 Ala114Val (rs1138272) was associated with the risk of glioma in the overall population and Caucasian population studied.

Ethnicity is an important factor associated with GST gene variants and glioma risk. In the meta-analysis in this study, a significant association was found between GSTP1 Ile105Val (Val/Val vs. Ile carriers) and glioma risk in the Han Chinese population, but not in the Caucasian or mixed population. The GSTT1 null/present variant was only significantly associated with increased risk of glioma in the Caucasian population. These results implied that the effects of GST gene variants affecting glioma was associated with ethnic differences. Further studies are required in future that includes populations of different ethnicities.

Meta-analysis undertaken in this study included nine publications that showed no significant association with the GSTP1 Ile105Val and Ala114Val variants. The funnel plots of the results of the three comparisons demonstrated that there was publication bias in the GSTP1 Ile105Val analysis; this may have been due to the limited research samples and unpublished negative results. There were no robust results from the exact effects of the GSTP1 variants. A widely expanded large-sample case-control study or GWAS may be necessary to identify the key pathogenic gene or genes associated with glioma.

This study had several limitations. The study was performed in a single center and had a limited patient sample size. Because of the limited number of patients, the cases of glioma were combined, without distinguishing between the histological type of glioma, grade, stage, or isocitrate dehydrogenase (IDH) gene status. While there were some studies that found the different genetic susceptibility to glioma subgroups, such as GBM and non-GBM tumors, IDH-mutant and IDH wild-type tumors [59-61].

WPL, QQ and JQ were involved in the conception and design of the study. HYL, MQZ and YJW collected the samples and DNA extraction. MQZ and YJW did the genotyping, literature searches, data extraction, and analyses. HYL, MQZ assessed the data quality. QQ and JQ contributed to data analysis and interpretation of the results. QL and JQ modified manuscript. All authors reviewed and approved the final manuscript.

9. Downs SH, Black N. The feasibility of creating a checklist for the assessment of the methodological quality both of randomised and non-randomised studies of health care interventions. Journal of epidemiology and community health. 1998;52:377-84

49. Hayes JD, Pulford DJ. The glutathione S-transferase supergene family: regulation of GST and the contribution of the isoenzymes to cancer chemoprotection and drug resistance. Critical reviews in biochemistry and molecular biology. 1995;30:445-600