Ovarian cancer is a common malignant disease with poor survival in women worldwide. There are 295,414 new cases of ovarian cancer and 184,799 death in 2018 [1]. Due to the lack of effective biomarkers, many patients are diagnosed at advanced stage with poor prognosis. Exploring the molecular mechanism of ovarian cancer progression would help develop novel therapeutic targets.

Circular RNAs (circRNAs) are involved in cancer development [2]. In osteosarcoma, hsa_circ_0081001 serves as a diagnostic and prognostic biomarker [3]. In triple-negative breast cancer, circ-UBAP2 predicts poor prognosis and promotes cancer progression [4]. But the function of circRNAs in ovarian cancer is unclear.

In this study, We found circGFRA1 was overexpressed in ovarian cancer. Downregulation of circGFRA1 inhibited cell proliferation and invasion, but induce apoptosis. Moreover, circGFRA1 could act as a sponge for miR-449a to regulate the expression of GFRA1 (GDNF family receptor alpha 1). circGFRA1 could be a potential diagnostic biomarker and therapeutic target for ovarian cancer.

Ovarian cancer cell lines OV119 and A2780 were obtained from ATCC (USA) and passaged within six months. The cells were cultured according to the manufacturer's instruction and short tandem repeat DNA profiling was performed before use.

Cells were seeded 24 hours before transfection. 48 hours after transfection, CCK-8 solution (10 μL) was added and cells were incubated for 2 hours before measuring the absorbance at 490 nM with Spectra Max 250 spectrophotometer (Molecular Devices, USA).

Cells were seeded on the EC matrix (Millipore, Germany) and 20% fetal bovine serum was added in the lower chamber as an attractant. Non-invading cells were gently removed while invasive cells were fixed and stained, imaged and counted 48 hours later.

Statistical analysis was performed with SPSS 19.0 software. Comparisons between groups were analyzed with t tests and χ2 tests. Unless otherwise indicated, data are presented as the mean ± s.e.m. of triplicate independent experiments. P < 0.05 was considered statistically significant.

circGFRA1 is overexpressed and promotes ovarian cancer progression in vitro

circGFRA1 is overexpressed and promotes ovarian cancer progression in vitro A. The expression of circGFRA1 in 50 pairs of ovarian cancer tissues (Tumor) and adjacent normal tissues (Normal). B. qRT-PCR was conducted after cell transfection. C. Cells were transfected and CCK8 assay was conducted. D. Apoptosis assay was performed 48 hours after transfection. E. Transwell assay was performed. Original magnification, ×200. **P < 0.01 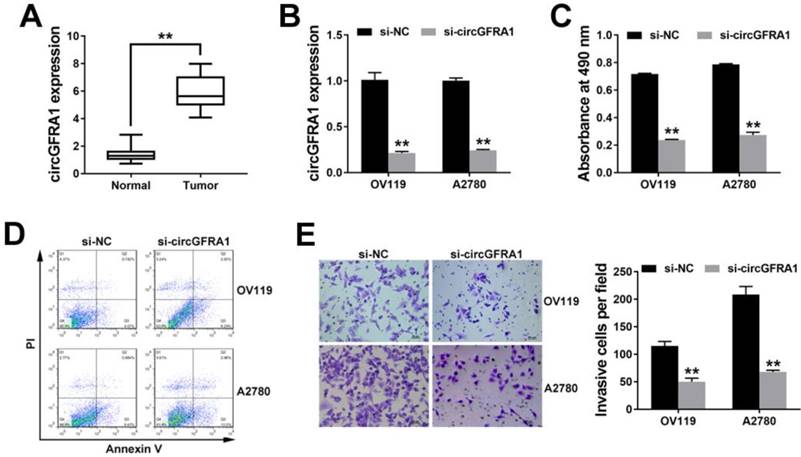 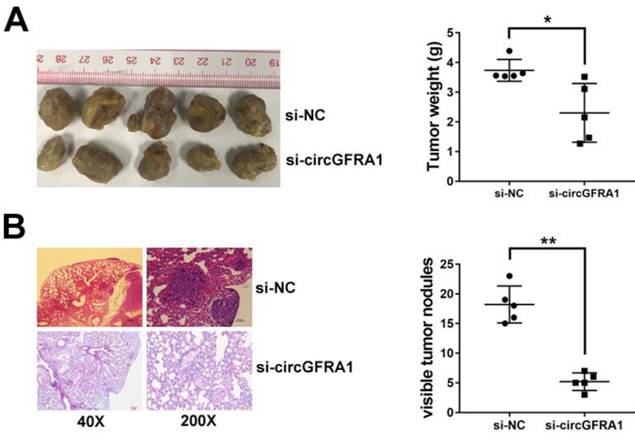 We detected the intracellular location of circGFRA1 in ovarian cancer cell and found that circGFRA1 mainly located in cytoplasm (Figure 3A). Thus, we explored the potential circRNA/miRNA interaction by Arraystars's home-made miRNA target prediction software. Binding site of miR-449a was found within circABCC2 sequence (Figure 3B). Therefore, we detected the expression of miR-449a in ovarian cancer tissues and adjacent normal tissues and found it downregulated in ovarian cancer (Figure 3C). Next, we conducted luciferase reporter assays to explore whether miR-449Aa could bind to circGFRA1. The luciferase intensity decreased when co-transfected with luciferase reporters and miR-449a mimics (Figure 3D). To confirm the direct binding between circGFRA1 and miR-449a, MS2bp-MS2bs based RIP assay was performed. We found that miR-449a mainly enriched in MS2bs-circGFRA1 group, indicating the specific binding of circGFRA1 and miR-449a (Figure 3E). Taken together, circGFRA1 could directly interact with miR-449a and act as a decoy for miR-449a.

Next, we continued to find target genes of miR-449a by TargetScan and found GFRA1 (Figure 4A). And GFRA1 was also overexpressed in ovarian cancer tissues (Figure 4B). Luciferase reporter assay showed that the luciferase activity decreased when co-transfected with miR-449 mimics and luciferase reporter (Figure 4C). And miR-449a could suppress the expression of GFRA1 (Figure 4D & 4E), indicating that GFRA1 was a downstream target of miR-449a.

circGFRA1 acts as a decoy for miR-449a A. The expression of U6, GAPDH and circGFRA1 were detected. B. The predicted binding site of miR-449a in circGFRA1. C. The expression of miR-449a in 50 pairs of ovarian cancer tissues (Tumor) and adjacent normal tissues (Normal). D. Luciferase reporter assay in cells co-transfected with miR-449a mimics and luciferase reporter. E. RIP assay was conducted after cell transfection. **P < 0.01 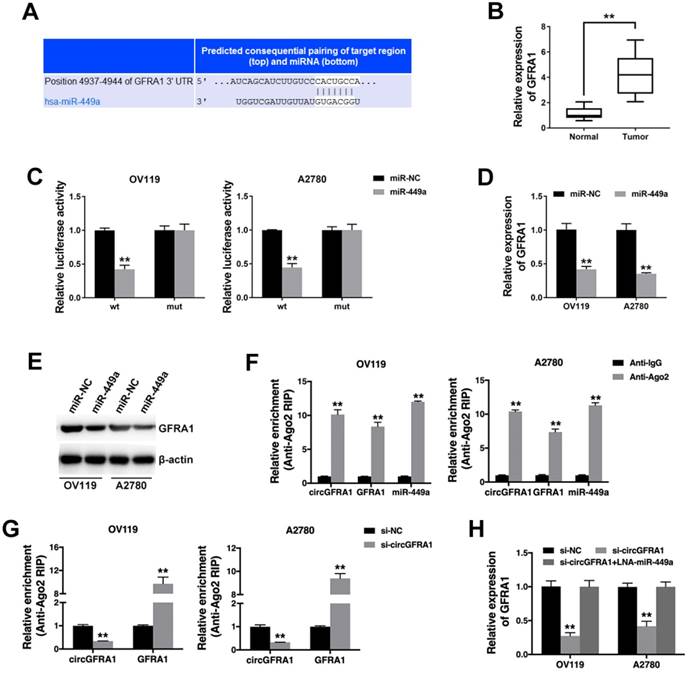 circRNAs have been reported to sponge miRNA to regulate cancer progression [15]. In hepatocellular carcinoma, hsa_circ_101280 promotes cell proliferation and suppressed apoptosis by sponging miR-375 [16]. In colorectal cancer, hsa_circRNA_103809 regulates cell proliferation and migration via miR-532-3p [17]. In breast cancer, hsa_circ_0052112 promotes cell migration and invasion by acting as sponge for miR-125a-5p [18]. In ovarian cancer, circ-ITCH suppresses cancer progression by targeting miR-145/ RASA1 signaling [19]. Here, we found that circGFRA1 could bind to miR-499a and acted as a sponge for miR-499a to regulate ovarian cancer progression.

miR-499a is a known tumor suppressor that suppresses cell proliferation and promotes apoptosis [20]. It has been reported that miR-499a suppressed tumor progression in multiple cancers, such as gastric cancer [21], bladder cancer [22] and prostate cancer [23]. In hepatocellular carcinoma, miR-449a was reported to suppress epithelial-mesenchymal transition and metastasis [24]. Here, we revealed that miR-449a was downregulated in ovarian cancer.

Moreover, we found that GFRA1 was a downstream target of miR-449a. GFRA1 was overexpressed in ovarian cancer. GFRA1 has been implicated in the regulation of cancer progression. In breast cancer, high expression of GFRA1 was adversely correlated with patients outcome [25, 26]. And anti-GFRA1 antibody may provide a targeted therapeutic opportunity for breast cancer patients [27]. In osteosarcoma, Kim M et al reported that GFRA1 contributes to cisplatin induced chemoresistance by facilitating autophagy via SRC-AMPK signaling [28]. In this study, we found that circGFRA1 could regulate the expression of GFRA1 via sponging miR-449a. Knockdown of circGFRA1 suppressed the expression of GFRA1 and inhibition of miR-449a could reverse it. circGFRA1 regulates ovarian cancer progression partly through sponging miR-499a and regulating GFRA1 expression.