Methods: Patients with stage II and III CRC who underwent curative resection were included from January 2009 to October 2015. The relationship between serum tumor markers and clinicopathological parameters was analyzed. DFS and OS were compared in stage II and III CRC.

Colorectal cancer (CRC) is one of the most common malignant tumors with the third highest morbidity rate and the second highest mortality rate among males and females combined in the United States1. In China, CRC is the fifth most commonly diagnosed tumor, and the mortality rate of CRC has increased in recent years due to changes in lifestyle2, 3. Despite great advances in surgery and drug therapy, the five-year relative survival rate is only 65%, ranging from 90% to 14% in different stages4. The prognosis of CRC is affected by many factors, such as the quality of surgery, patients' compliance, and adjuvant therapy. After curative surgery, postoperative pathological reports are usually the main references to predict the prognosis. In addition, preoperative serum tumor markers are classic and important components with referenced value.

The detection of preoperative tumor markers is widely used in clinical practice because of its great convenience and acceptability. Serum carcinoembryonic antigen (CEA) has always been at a core position as a reliable tumor marker in CRC, which is recommended by the NCCN guidelines as a prognostic and monitoring indicator. CEA is an acid glycoprotein involved in cell recognition and cell adhesion and is secreted by solid tumors. The level of preoperative CEA influences the prognosis of multiple tumors, such as gastric cancer, lung cancer and CRC5, 6, 7. Furthermore, CEA levels are correlated with the metastasis and recurrence of CRC after curative surgery8, 9. CA19-9 can be elevated in digestive system tumors. For CRC, the preoperative increased level of CA19-9 predicts poor survival of CRC, and postoperative CA19-9 is a valuable prognostic index for monitoring lung and liver metastasis10, 11, 12. CA125 is shown to be expressed in ovarian cancer and gynecological diseases13. Furthermore, CA125 is also an independent factor for the prognosis of CRC14. CA242 has high specificity and sensitivity in CRC. CA242 is expressed independently of CEA, and the combination of CEA and CA242 has more sensitivity in CRC than either alone15.

This study was a single-center retrospective clinical study and was registered in the Chinese Clinical Trial Registry (Approval No. ChiCTR1800016906). The studies on human subjects were approved by the ethics committee of Shanghai Jiao Tong University Affiliated Sixth People's Hospital (Approval No. 2018-KY-031K). Patients with pathologically diagnosed stage II and III CRC who underwent curative resection at the Department of General Surgery, Shanghai Jiao Tong University Affiliated Sixth People's Hospital were selected for participation from January 2009 to October 2015. Written informed consents were gained from all patients in this study. Patients under age 18 and those with emergency operations, incompatible pathological types, multiple primary tumors, unclear causes of death or death within 30 days, or incomplete data as well as those who were lost to follow-up were excluded.

The clinical characteristics of the patients, including gender, age, tumor location and pathological reports, were obtained from electronic patient records and the departmental database. Pathological stage was assessed according to the 8th AJCC criterion for CRC. The results of four preoperative tumor markers (CEA, CA125, CA19-9 and CA242) were collected from biochemistry reports of the Laboratory Medicine Department, and no patients received any adjuvant radiotherapy or chemotherapy before these four tumor markers were determined. The upper normal limits of CEA, CA125, CA19-9 and CA242 were 5 ng/ml, 15 U/ml, 27 U/ml and 15 U/ml, respectively. If the values of these tumor markers were above the upper limit, they were considered positive. To analyze the effect of the numbers of increased preoperative tumor markers on the prognosis of stage II and III CRC, the weight of each marker was first evaluated. Subsequently, the patients were scored as 0, 1, 2, 3 and 4 according to the positive numbers of tumor markers; thus, there were five groups in this study.

We first summarized the patients' basic information and then analyzed the factors affecting positive tumor markers. Then, the relationship between each group (different scores) and the clinical pathological indicators was tested, and we studied the survival differences among groups. Furthermore, we separately examined the survival differences among different groups with stage II and III CRC.

All data in this study were analyzed by IBM SPSS STATISTICS 22.0 software. Statistical methods mainly used the Pearson chi-square test (minimum theoretical frequency ≥ 5), continuous correction chi-square test (5>minimum theoretical frequency ≥ 1), Fisher's exact probability method (minimum theoretical frequency < 1) and rank sum test. Survival times, including 3- and 5-year survival rates, were assessed by the Kaplan-Meier method, and the log-rank test was used to compare the differences in survival rates among groups. Cox regression was used to detect the effect of various indicators on the prognosis of stage II and III colorectal cancer. P values were two-sided, with statistically significant differences at p < 0.05.

A total of 735 patients who underwent curative resection for stage II and III CRC with complete clinical and follow-up data were enrolled in our study. 346 Patients who met our exclusion criteria were excluded (Figure 1). 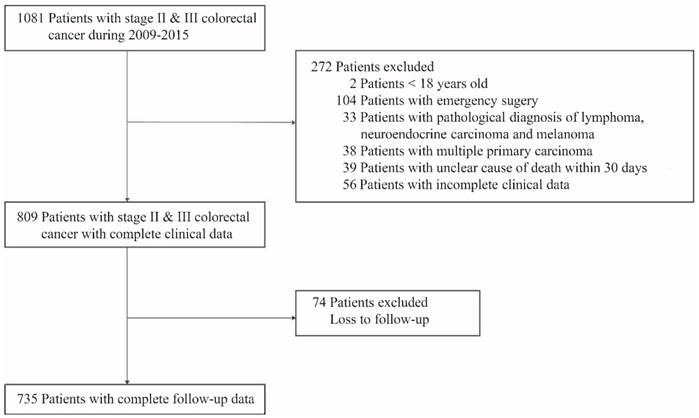 To verify the weight of each serum tumor marker on the prognosis of stage II and III CRC, we analyzed the differences among these increased tumor markers according to DFS and OS. The results showed no significant difference among these tumor markers between DFS (p=0.053; Figure 2A) and OS (p=0.23; Figure 2B), which meant that the weight difference of these tumor markers was narrow. Therefore, these 735 patients were scored on a scale of 0 to 4 (five groups) based on the number of preoperative increased tumor markers (if none/anyone/ any two/ any three/all among the 4 markers increased, the score is 0/1/2/3/4 respectively). Then, the association between different scores and clinicopathologic variables was revealed. We found that different scores were closely related to clinical stage, T stage, N stage, tumor location, pathology type, differentiation, lymphatic invasion and vascular invasion (all p values < 0.05; Table 4). There was no significant difference in gender, age, T3/T4, or perineural invasion (p>0.05; Table 4). In addition, these different scores significantly affected metastasis as well as the recurrence status and survival status (p < 0.05; Table 4). To further clarify which groups had differences, we selected the clinicopathologic variables with p values less than 0.05 for a subgroup analysis. As shown in Table 5, there was a pairwise comparison between different scores and variables (Table 5).

Univariate and multivariate Cox regression analysis for DFS and OS

In our study, 735 patients with stage II and III CRC were enrolled and analyzed based on their clinicopathological and follow-up data. We demonstrated the association between tumor markers and clinicopathological parameters, which was consistent with the findings of a previous study19. Further, patients were scored according to the number of preoperatively increased tumor markers. We also clarified the relationship between groups with different scores and clinicopathologic variables and confirmed that the higher the score was, the worse the survival. More importantly, we observed that patients with stage II with scores of 3 and 4 had shorter overall survival times than those with stage III with a score of 0, and this difference was statistically significant.

Further pairwise comparison of parameters with p values less than 0.05 in the Table 4 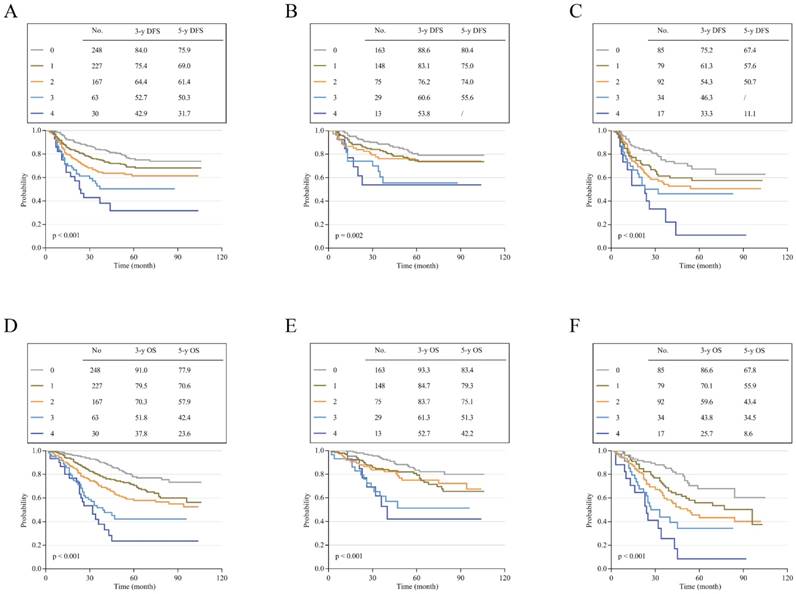 Many studies have focused on serum tumor markers in stages I to III CRC. Jung et al. analyzed 472 CRC patients and found that preoperative CEA was an independent prognostic factor with regard to CSS and DFS, and CA 19-9 also had prognostic value for CSS and DFS20. Another study that enrolled 237 patients found that CEA predicted OS (HR 2.50, 95% CI 1.17-5.36, P = 0.02) and DFS (HR 1.78, 95% CI 1.02-3.13, P = 0.04)7. Similar to our study, Gao et al. analyzed the relationship between serum tumor markers (including CEA, CA19-9, CA72-4 and CA125) and clinicopathologic factors and suggested that the combination of multiple preoperative tumor markers could improve the early diagnosis and treatment of CRC21. Additionally, Ning et al. found that the combined detection of serum tumor markers was useful not only in the diagnosis of CRC but also in gastric cancer22. A study from Japan and the United States focused on preoperative and postoperative CEA levels, and the results suggested that elevated postoperative CEA (hazard ratio, 2.0; 95% CI, 1.1-3.5) had a shorter RFS than normalized postoperative CEA (HR, 0.77; 95% CI, 0.45-1.30)23. Another innovative study demonstrated that the preoperative CEA cut-off point should be 2.35 ng/mL in stage I and II colon cancer24. In recent years, many studies have begun to explore the significance of postoperative tumor markers. A Japanese study suggested that the combination of post-CEA and post-CA 19-9 after R0 resection in stage IV CRC could predict the risk of recurrence25. Moreover, Araujo RL et al. showed that postoperative CEA ≥ 15 ng/ml strongly indicated recurrence after resection for colorectal liver metastases26. It can be seen that serum tumor markers are of great value in predicting the prognosis of CRC, and we still need to mine more data and conduct more research to show their value.

Nevertheless, few studies had been involved in the survival of patients with stage II and III CRC who were scored based on an increased number of serum tumor markers. As is known, according to the results of current large clinical trials27, 28, there are still many controversial points in the subsequent treatment of stage II and III CRC after curative resection. Our study found that stage III patients with low scores had longer DFS and OS times than stage II patients with high scores, which surprised us. Based on pathological reports, postoperative radiotherapy and chemotherapy may have defective aspects. Should we refer to the preoperative serum tumor markers when we give postoperative chemotherapy to stage II patients? In other words, should all stage III patients require whole-course chemotherapy? At the same time, our research has some shortcomings. This is a single-center retrospective case study with a limited number of cases included. In addition, the few numbers of patients with scores of 4 in the study restricted our study of these patients.

Despite some new findings from our study, it is important to note that tumor markers cannot replace the pathological criteria or the role of imaging examinations in the follow-up of CRC. However, as a supplement, serum tumor markers should be given more attention. We will further explore the significance of preoperative and postoperative tumor markers and use serum tumor markers to detect the metastasis or recurrence of CRC as soon as possible.