Centromere protein N (CENP-N), an important member of the centromere protein family, is essential for kinetochore assembly and chromosome segregation; however, the relevance of CENP-N in cancers remains unknown. The aim of this study was to investigate CENP-N expression and its functional mechanisms in oral squamous cell carcinoma (OSCC). CENP-N expression was up-regulated significantly in vitro and in vivo in OSCCs. Overexpressed CENP-N was closely (p < 0.05) correlated with tumor growth using quantitative reverse transcriptase-polymerase chain reaction, immunoblot analysis, and immunohistochemistry. CENP-N knockdown (shCENP-N) cells showed depressed cellular proliferation by cell-cycle arrest at the G1 phase with up-regulation of p21Cip1 and p27Kip1 and down-regulation of cyclin D1, CDK2, and CDK4. Interestingly, we newly discovered that calcitriol (1, 25-dihydroxyvitamin D3) controlled the CENP-N expression level, leading to inhibition of tumor growth similar to shCENP-N cells. These results suggested that CENP-N plays a critical role in determining proliferation of OSCCs and that calcitriol might be a novel therapeutic drug for OSCCs by regulating CENP-N.

CENP-N binds directly to the centromere-targeting domain of CENP-A [4,5]. CENP-N depletion causes down-regulation of several CENPs and is considered essential for making a new centromere [6]. Other functions of CENP-N, including in cancer research, are unclear, whereas centromere, mainly the CENP complex, is well elucidated.

The current study found that CENP-N is overexpressed in oral squamous cell carcinoma (OSCC) in vitro and in vivo. We also identified a novel drug for tumor growth suppression through CENP-N down-regulation.

The ethics committee of Chiba University approved the protocol of the current research project (protocol number, 680). All subjects provided written informed consent for inclusion in this study.

IHC of OSCCs and normal tissues (100 samples) was performed as described previously [13], with appropriate antibodies such as anti-CENP-N (Proteintech). The OSCCs and normal tissues were obtained from the primary OSCC patients from 2007 to 2016, excluding distant metastasis. The IHC scores were calculated from the staining intensity and proportion of the cells stained for CENP-N. Regarding the intensity of the stained cells, we classified four levels (0, 1, 2, 3) as described previously [14]. The median score of all OSCCs was 153.99. CENP-N was classified as positive and negative using the median score of all OSCCs as the cut-off points [15,16]. Cases with a score over the median score were considered CENP-N-positive.

To investigate the effectiveness of CENP-N knockdown on cellular growth, we performed a cellular proliferation assay as mentioned previously [20-24]. For details, shCENP-N and shMock cells (Ca9-22 and SAS) were disseminated in six-well plates (1×104 viable cells/well). Every 24 h, the cells were trypsinized and counted in triplicate using a hemocytometer (up to 168 h).

Fisher's exact test and Student's t-test were used to analyze the statistical differences. p < 0.05 indicates statistical significance. All data are expressed as the mean ± standard error of the mean.

Increased CENP-N mRNA and protein expression levels in OSCCs. (A) Significant (*p < 0.05, Student's t-test) up-regulation of CENP-N mRNA is seen in 10 OSCC cells compared with the HNOKs by RT-qPCR. The data are expressed as the mean ± standard error of the mean (SEM) from three assays. (B) The expression of CENP-N protein is up-regulated in OSCC cells compared with the HNOKs by immunoblot analysis. (C) Representative IHC results for CENP-N protein in normal oral tissue and primary OSCC tissue. Scale bars = 50 μm. (D) The status of CENP-N protein expression in primary OSCC (n = 100) and its normal counterparts by the IHC scoring system. 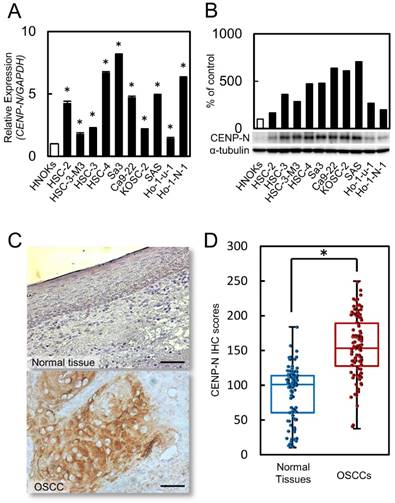 Correlation between CENP-N expression and clinical classification in OSCCs.

We treated the cells with calcitriol to determine the optimal concentrations for inhibiting CENP-N expression. Calcitriol inhibited CENP-N mRNA and protein expression levels in a dose-dependent manner (Fig. 3A, B; optimal concentrations, 20 μM with the Ca9-22 cell line and 10 μM with the SAS cell line). CENP-N mRNA and protein levels in the cells treated with an optimal concentration of calcitriol decreased significantly (p < 0.05) compared with control cells (Fig. 3C, D). To assess the effect of calcitriol on cellular growth, we performed a cellular proliferation assay. The cellular growth of the calcitriol-treated cells was significantly (p < 0.05) lower than that of control cells (Fig. 4A). In the cell-cycle analysis, the percentage of the G1 phase in the calcitriol-treated cells was clearly (p < 0.05) higher than that of control cells (Fig. 4B). We also evaluated the protein levels of p21Cip1, p27Kip1, cyclin D1, CDK2, and CDK4. As expected, the p21Cip1 and p27Kip1 protein levels were up-regulated, and the cyclin D1, CDK2, and CDK4 protein levels were down-regulated in the cells treated with calcitriol (Fig. 4C). These data indicated that calcitriol treatment inhibited cellular proliferation by cell-cycle arrest at the G1 phase similar to CENP-N knockdown. 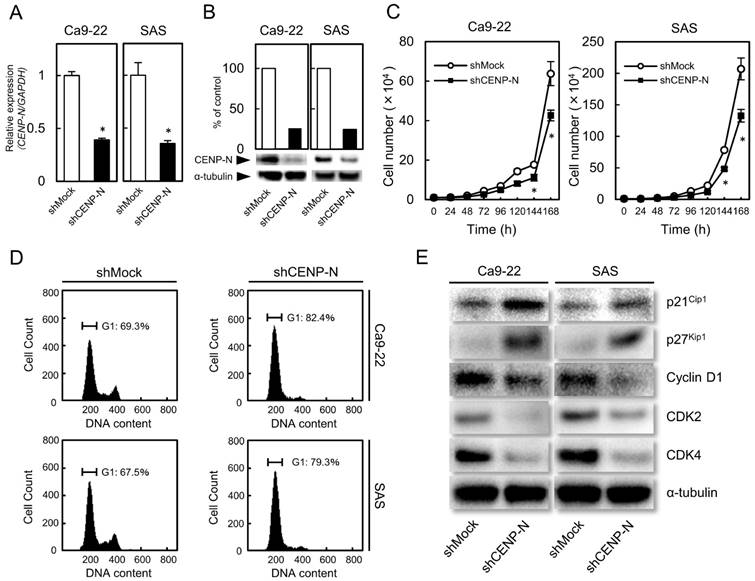 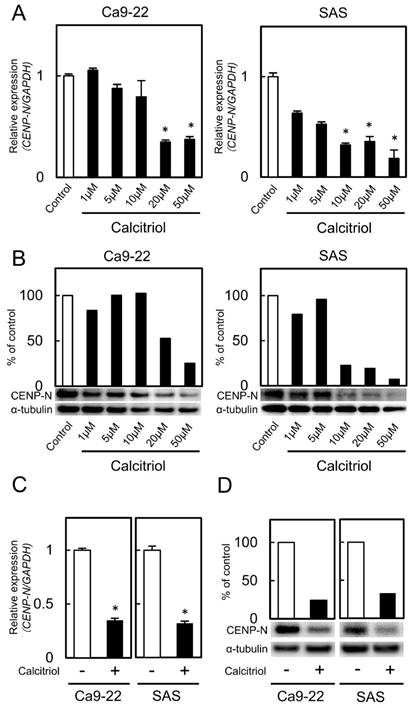 Of the CENPs, only CENP-A integrates centromeric chromatin instead of histone H3. CENP-A acts as an oncogene in the regulation of cellular growth in liver cancer [25]. CENP-A also is a reliable biomarker for tumor progression and prognosis in breast, ovarian, and lung cancers [26-30]. CENP-N binds the centromere-targeting domain of CENP-A; however, the functions of CENP-N in cancer research have not been reported to date.

Similar to the previous data, which showed that knockdown of cyclin D1 and CDK4 shows negative regulation of CENP-N by microarray [31], we found that CENP-N knockdown cells not only down-regulated cyclin D1 and CDK4 but also up-regulated p21cip1 and p27kip1. Thus, our date indicated for the first time that CENP-N plays a decisive role in tumor growth in OSCC by cell-cycle progression.

Calcitriol is the most biologically active metabolite of vitamin D with high affinity for the vitamin D receptor (VDR) and has been reported to have anticancer effects [32]. Calcitriol acts on bone and mineral homeostasis, inhibits proliferation, and induces differentiation of various normal and malignant cells [33]. However, the exact molecular mechanism behind these anticancer effects is unknown. Calcitriol prescribed for patients with hypocalcemia, osteoporosis, and prevention of corticosteroid-induced osteoporosis, affects the cell cycle with accumulation of cells at the G1 phase of the cell cycle. In addition, calcitriol inhibits its downstream genes, including CENP-A [34,35]. Since CENP-N is a critical binding partner of CENP-A, we speculated that calcitriol also controls CENP-N expression. Consistent with our hypothesis, CENP-N expression decreased after treatment with calcitriol. In addition to our CENP-N knockdown experiments, calcitriol also had an anticancer effect on OSCCs by cell-cycle arrest at the G1 phase with up-regulation of p21Cip1 and p27Kip1, and down-regulation of cyclin D1, CDK2, and CDK4 (Fig. 4D). Therefore, these data suggested that CENP-N is an important target for cancer treatment using calcitriol.

In conclusion, CENP-N is a useful biomarker involved in the proliferation of OSCCS, and calcitriol might be a novel therapeutic drug for OSCCs through regulation of CENP-N. 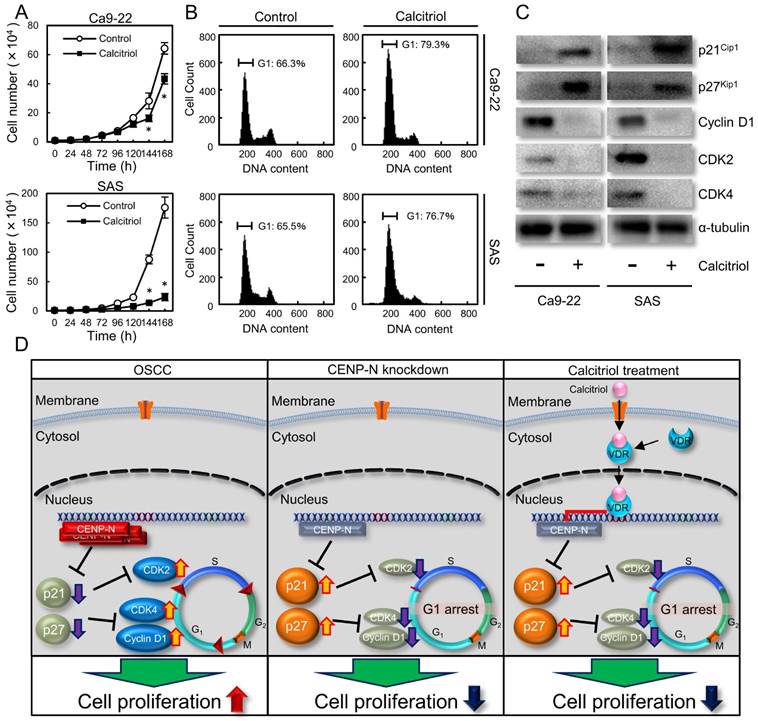 We thank Lynda C. Charters for editing this manuscript. We declare that all authors have no conflicts of interest.