Background: To investigate the relationship between the pretreatment serum lipid concentrations and the clinical outcomes in patients with locoregionally advanced nasopharyngeal carcinoma (NPC) who were treated with a combination of chemotherapy and radiotherapy.

Methods: From August 2002 to April 2005, 400 patients with stage III or stage IVa nasopharyngeal carcinoma were recruited for a randomised clinical trial of induction chemotherapy combined with radiotherapy or concurrent chemoradiotherapy. Pretreatment serum lipid concentrations were examined in 342 patients. Both univariate and multivariate analyses were conducted to investigate the association of serum lipid levels with different treatment outcomes.

Conclusions: The pretreatment serum level of HDL-C was an independent prognostic factor for patients with locoregionally advanced nasopharyngeal carcinoma who were treated with chemoradiotherapy.

The clinical significance of circulating lipid levels in the diagnosis and prognosis of atherosclerosis and coronary artery disease has long been recognised [2]. Recently, some epidemiologic studies have documented an association between low circulating cholesterol and high overall cancer incidence and mortality [3-5]. Cancer patients often present with an altered serum lipid profile including changes in the levels of high-density lipoprotein cholesterol (HDL-C). Compared with the profiles of non-cancer subjects, considerable changes have been documented in the serum lipid profiles of patients with breast cancer [6], lung cancer [7], prostate cancer [8] and endometrial cancer [9]. Lipids are known to play a crucial role in tumour development and progression [10]. However, few systemic studies have focused on the association of HDL-C and the prognosis of cancer patients.

In our previous study [11], we found that pretreatment body mass index (BMI) was an independent prognostic factor for locoregionally advanced nasopharyngeal carcinoma. As we already know, BMI is a reflection of habits, such as physical activity, dietary protein intake and lipid intake. However, the relationship between the pretreatment serum lipid levels and the prognosis of locoregionally advanced nasopharyngeal carcinoma is not clear. To the best of our knowledge, no published articles have discussed this question. Thus, based upon the data of a large, prospective randomised clinical trial [12], we conducted a further study to investigate the effect of the pretreatment serum lipid profile on the prognosis of patients with locoregionally advanced nasopharyngeal carcinoma who received a combination of chemotherapy and radiotherapy.

In the present study, pretreatment serum lipid concentrations were examined in 342 patients (the serum lipid concentration was not tested in the rest 58 patients because the doctor in charge believed the lipid level was not necessary to be known for chemotherapy or radiotherapy). The serum levels of total cholesterol (TC), triglyceride (TG), high-density lipoprotein cholesterol (HDL-C) and low-density lipoprotein cholesterol (LDL-C) were examined from samples obtained during the early morning prior to breakfast and before any anti-cancer treatment had been administered. The lipid levels were measured immediately by Hitachi 7600 Biochemistry Automatic Analyzer. We followed the guidelines published by the American Heart Association, and defined elevated lipid levels as TC>200 mg/dl, TG>150 mg/dl, LDL-C>130 mg/dl. Low HDL-C level was defined as HDL-C<40 mg/dl [15].

All endpoints were measured from the date of random assignment, and statistical tests were performed using SPSS V17.0 (SPSS Inc., Chicago, IL). The time to the first defining event was assessed for the following endpoints: local-regional failure-free survival (LR-FFS-persistence/recurrence in the nasopharyngeal region and/or in the cervical region), distant failure-free survival (D-FFS-haematogenous metastasis), failure-free survival (FFS-disease failure at any site) and overall survival (OS-all cause mortality). The survival rates were calculated with the Kaplan-Meier method and were compared with the log-rank test. A 2-tailed p value of less than .05 was considered statistically significant.

As previously described by Huang[12], no significant differences were observed with respect to the failure-free survival, loco-regional control, or distant control between the IC + RT and the IC + CCRT groups for the total 400 NPC patients.

In the present study, the median age was 43 years (range, 18-65 years) for the entire 342 patients. The mean HDL-C was 50 mg/dl (range, 24-100 mg/dl). The baseline characteristics of the 342 patients are shown in Table 1 according to the AHA subgroups. There were 80 patients (23.4%) in low- HDL-C group and 262 (76.6%) patients in high-HDL- C group. The two groups showed similar demographics, such as in the T and N stage, age, BMI and radiotherapy dose. Aside from these factors, compared with high-HDL-C patients, the low-HDL-C group contained a higher proportion of male patients (p =0.003). 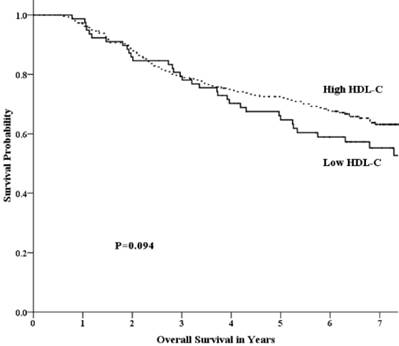 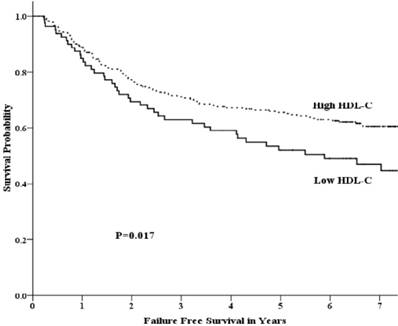 In the present study, which included data from a large, randomised trial of patients with locoregionally advanced nasopharyngeal carcinoma, we found that a low pretreatment HDL-C level was associated with poor failure-free survival. We did not find a correlation between the prognosis of patients with NPC and the levels of TC, TG or LDL. The findings of this study demonstrated that the pretreatment HDL-C level was a significant favourable independent prognostic factor for patients with locoregionally advanced nasopharyngeal carcinoma.

In our study, a multivariate analysis showed that HDL-C was an independent prognostic factor for both FFS and OS. Many published studies have focused on the role of lipid profiles in carcinogenesis [16-18]. This study first investigated the prognostic value of lipid profiles, including those of TC, TG, HDL-C and LDL-C in patients with locoregionally advanced NPC. Our study revealed that HDL-C may act as a anti-carcinogenic factor among lipid profiles and influences the prognosis of patients with NPC.

In clinical practice, doctors did not routinely recommended every NPC patients to receive pretreatment lipid profile test because the result of lipid profile did not influence the permission of chemotherapy. However, our results indicate that pretreatment HDL-C is a prognostic factor and would be applied in risk stratification for locoregionally advanced NPC. So we advise locoregionally advanced NPC patients routinely receive this test in future.

Currently, with the improvement in radiotherapy techniques and imaging technology, excellent local control rates can be achieved after primary treatment of NPC. Therefore, it is very difficult to find a locoregional prognostic factor when little locoregional failure occurred. In the present study, we provide evidence that high HDL-C levels improve the 5-year FFS in patients with NPC (p = 0.017) and provide marginal benefits with regard to the 5-year LR-FFS in patients with NPC (p = 0.062). These results indicate that the level of HDL-C may be a potential independent prognostic factor of locoregional control in patients with locoregionally advanced NPC. Larger sample size of study or meta-analysis may confirm the role of HDL-C in the local control of NPC. Distant metastasis represents a major cause of treatment failure, particularly in patients who present with advanced primary disease [19]. Our study showed that HDL-C was a marginal independent factor for D-FFS according to a Cox regression analysis (p =0.059). The inner mechanism of influence of HDL-C on the metastasis of NPC is still unclear, and further laboratory research is needed.

In our previous study, BMI was a favourable prognostic factor for patients with locoregionally advanced NPC. Patients with a higher BMI had a better prognosis. In this study, an inverse association was observed between BMI and HDL-C levels (r=-0.250, p<0.001) according to a Pearson correlation analysis. This result was consistent with that of Rutherford's study [20] which showed that HDL-C levels were inversely related to BMI in an American cohort. Interestingly, although HDL-C and BMI demonstrated an inverse relationship, they were both favourable prognostic factors for locoregionally advanced NPC. This phenomenon implies that HDL-C and BMI may operate through different mechanisms in regard to their influence on the prognosis of NPC. A Cox regression analysis further confirmed that HDL-C and BMI were both independent prognostic factors for locoregionally advanced NPC. This result indicates that the combined factors of HDL-C (biomarker) and BMI (anthropometric characteristics) would be of great benefit to predict NPC prognosis.

In the current study, the unbalanced distribution of gender is one potential confounding factor in our results. The low-HDL-C group contained a higher proportion of male patients. Compared with female patients, male patients had a lower FFS in this study and in other studies [21-24]. However, a Cox regression analysis showed that, after the adjustment for age, gender, T stage, N stage, BMI, radiotherapy dose and treatment modality, HDL-C was still an independent prognostic factor for NPC.

There remains a relative paucity of research that has examined the influence of lipid profiles on the survival of patients with locoregionally advanced nasopharyngeal carcinoma. The level of HDL-C in the blood is influenced by several lifestyle-related factors, such as obesity and dietary components [25]. The function of HDL-C in reverse cholesterol transport is important in the development of atherosclerosis. However, it is not clear whether this function of HDL-C could influence carcinogenesis. According to several previously published studies, HDL-C prevents the generation of reactive oxygen species [26, 27], modulates cytokine production [28], and acts as an anti-inflammatory modulator [29] and anti-carcinogenic factor [30]. These studies provide a possible explanation for the involvement of plasma HDL-C in tumourigenesis as well as in the progression and development of cancer. However, further studies are required for a better understanding of this phenomenon.

The major limitation of this study is that the data were obtained exclusively at one center. NPC is a unique disease that is characterised by an unbalanced endemic distribution. Our report reflects findings in patients who were referred to a single cancer centre in an area where NPC is endemic. It is uncertain whether the same conclusion could be extrapolated to an area with a low incidence of NPC. Therefore, our findings should be interpreted with caution until they are validated in a large multi-institutional pooled analysis.

In conclusion, the pretreatment level of HDL-C in the serum was an independent prognostic factor for patients with locoregionally advanced nasopharyngeal carcinoma who were treated with chemoradiotherapy. The mechanism by which HDL-C influences the prognosis of NPC is unclear and should be further investigated in future studies.