Background: Esophageal squamous cell carcinoma (ESCC) has been having a high mortality rate in China. Most patients are diagnosed in advanced stages, leading to the poor prognosis and low 5-year survival rate. Detection of precancerous lesions or early cancers is the key to improving this situation. Although previous studies have identified some risk factors for ESCC, they rarely paid attention to the premalignant esophageal lesions. We thus initiated a population-based screening study aiming to assess risk factors associated with esophageal precancerous lesions (EPLs) in a high risk Chinese population.

Methods: From September 2013 to July 2015, we screened residents aged 40-69 years from 53 randomly selected communities in Feicheng, China (n = 5076). Each participant went through questionnaire interview, physical examination, endoscopy and biopsy. Using logistic regression, we compared participants with EPLs to that with normal esophageal mucosa for finding potential risk factors of EPLs.

The incidence rate of esophageal cancer (EC) is ranked eighth in the most common cancer-related diseases worldwide (1). There were 455,800 new EC cases and 400,200 deaths caused by EC around the world in 2012 (2). Although some cancers, such as breast cancer and prostate cancer, have higher incidence rates than EC, they have lower mortality rates, which reflects lower fatality rates compared to EC.

There is also a remarkable difference in EC incidence rates among different geographical regions. The highest incidence rates were found in China, Iran, South America, and South Africa, which is often referred to as the “esophageal cancer belt” (2). As one of the countries in this belt, China bears a heavy disease burden with respect to EC (3), with Feicheng having one of the highest rates of incidence. Whereas the incidence of esophageal adenocarcinoma has been rising slowly and steadily over the past four decades, squamous cell carcinoma (ESCC) is still the most prevalent subtype in China (4, 5). It is among the five leading causes of cancer death in both men and women (6).

For ESCC patients, the cancer stage at first diagnosis is a decisive factor for prognosis (7). Because the early symptoms of ESCC are not obvious enough to attract the patient's attention, individuals are often in the advanced stages of cancer when they go to hospital for examination. Thus the age-specific 5-year survival rate for adults with EC is 10.9% in Europe (8) and ~10-15% in China (9-11). Moreover, without active and appropriate treatments, patients who have been diagnosed as having EPLs may continue to develop into an advanced stage (12). Currently, the factors causing high rates of ESCC in Feicheng remain obscure. Here we used a population-based design study, a powerful and critical method, to identify the possible risk factors for EPLs/ESCC.

Feicheng is located in the central part of Shandong Province, with a total of 605 communities. We randomly selected 53 communities in Feicheng. The work of recruitment was assisted by Feicheng Disease Control Center and Community Health Centers. The purpose and process of this research were thoroughly explained to each eligible participant. A signed informed consent was mandatory before recruitment.

Inclusion criteria: 1) Being a permanent resident in Feicheng. 2) Aged 40-69 years.

Exclusion criteria: 1) Refusing to participate in the study. 2) Working outside Feicheng more than six months a year. 3) Having endoscopy contraindications. 4) Having an iodine allergy or hyperthyroidism. 5) Having EC history (13).

There are 5076 participants in the final analysis. Figure 1 summarizes the inclusion and exclusion process of this study.

Questionnaire interview was conducted at Community Health Centers by trained investigators using a structured questionnaire. Detailed demographic characteristics, habits, lifestyle information as well as health and disease information was collected. Participants went through a simple physical examination and then endoscopic test at the Cancer Screening Center of Feicheng Hospital. During the endoscopy, physicians used Lugol's iodine staining method to find suspicious tissues, which were biopsied and analyzed.

In order of severity, esophageal mucosa status mainly includes normal esophageal mucosa, minor mucosa changes, esophagitis, esophageal squamous simple hyperplasia (ESSH), and esophageal squamous dysplasia (ESD) (14). ESD is classified as mild, moderate, or severe. Mild and moderate ESD together falls under low-grade ESD. Severe ESD, including squamous cell carcinoma in situ, is considered as the high-grade ESD (15). Mild ESD is the earliest form of EPLs. The progression, from chronic esophagitis, by way of ESSH, to ESD, is known as a common route to the ESCC (12, 14, 16). In our study, we grouped the participants into 3 groups: 'normal', 'minor changes/esophagitis/ESSH', and 'ESD/ESCC'. For the participants with multiple diagnosis records in one biopsy, we only care about the most severe one.

All the variables in this study are categorical. So we calculated frequencies and percentages for each variable. We described the difference in demographic characteristics, habits, lifestyle, and health information between 3 groups by χ2-test (Table 2). To assess the association between ESD/ESCC and the factors of interest, we used multinomial logistic regression model to estimate the unadjusted odds ratios (ORs) with 95% confidence intervals (CIs). Further adjusting for sex and age, adjusted ORs (95% CIs) were also showed in Table 3. The group of 'normal' was defined as the reference throughout the whole analysis. 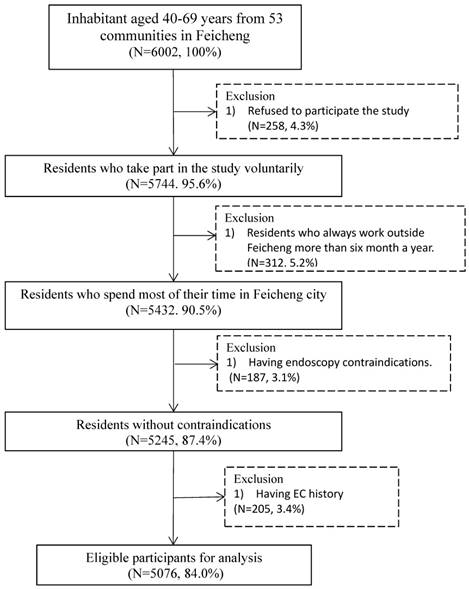 As shown in Table 1, a total of 570 EPLs cases and 56 ESCC cases were diagnosed. EPLs cases included 406 cases of mild ESD, 105 cases of moderate ESD, and 59 cases of severe ESD (or squamous cell carcinoma in situ). Cases of ESCC were dominated by early-stage cancer, containing 30 cases of intramucosal carcinoma and 26 cases of invasive carcinoma.

Diagnosis results among the participants

Table 2 presents the demographic characteristics, as well as distribution of habits, lifestyle and health information. Among the participants, 51.64% were men, 90.84% were farmers. Overall, study population had a relatively low education level, most of individuals didn't or just completed the 9-year compulsory education. And participants who were diagnosed with ESD/ESCC were more likely older people. Tobacco smoking and alcohol consumption were both significantly different between different pathological groups. Participants who mostly drank tap-water in the past 10 years were less in the group of 'ESD/ESCC' compared with another two groups. In terms of heating method in winter, cereal straw and coal heating were more common in the group of 'ESD/ESCC', electric heating was more common in 'norma' group. Meanwhile, 21.25% participants in the group of 'ESD/ESCC' had a very poor oral health, whereas 9.11% in good oral health.

Characteristics of 5076 participants from a high risk Chinese population

We conducted a population-based screening study in Feicheng, China, aiming to figure out the risk factors associated with EPLs. We found that drinking low-quality water might lead to an increased risk of having EPLs. Previous studies indicated that ESCC is the result of a combination of multiple risk factors, containing environmental and biological factors (17, 18). Drinking water is one of the basic necessities of life, as well as a potential way of exposure to risk factors. Different from pond water or well water, tap water had been purified and disinfected before delivering to users. Purification and disinfection can significantly reduce the concentrations of most carcinogens. Several studies suggested that high level of nitrate in drinking water would increase the risk of ESCC, possibly through the formation of N-nitroso compounds (19-21). So we should conduct a further study to find out the specific carcinogens in drinking water, which have been increasing the incidence of EPLs/ESCC in Feicheng.

Another main finding of our study was that house heating method may influence the odds of having EPLs/ESCC. Cereal straw heating is associated with the raised risks of having EPLs. Meanwhile, electric heating might be associated with reduced risk of having EPLs/ESCC. Some studies found that indoor air pollution caused by using stoves or fireplaces is associated with the higher risk of having lung cancer and breast cancer (22-24). Only one study suggested that using heating stoves without ventilator installed in their home may lead to increased risk of ESD (25). Our research examined in details the use of different materials for house heating in this area, and showed that cereal straw heating is a risk factor for EPLs. Our primary hypothesis is that bad heating materials can cause loads of pollutants, such as polycyclic aromatic hydrocarbons and sulfur dioxide, which may contaminate air, water and food. Biomass fuel is widely used in daily heating in Feicheng population, thus significantly increasing the chance of people contacting carcinogens or mutagens.

The third interesting finding was that we observed no significant association between tobacco smoking and the risk of EPLs/ESCC. Tobacco smoking was identified as a strong determinant of ESCC in many western countries (5, 26, 27). And a previous national-wide case-control study (28) that was conducted in China also indicated the same association. However, this is not the case in Feicheng. Our study even suggested a mild inverse association between tobacco consumption and EPLs/ESCC in the adjusted model. This inverse association occurred both in current smoker and former smoker, but without statistically significant. With respect to alcohol consumption, unlike many studies (27, 29), we didn't observe any statistically significant increased/decreased EPLs/ESCC risks among participants who were current drinkers or former drinkers. This is possibly due to the smokers/drinkers in this area consuming relatively small daily amounts of tobacco/alcohol, and indicates the fact that there must be the other risk factors dominating the incidence of EPLs/ESCC in this population.

To the best of our knowledge, this is the largest population-based screening study to date to investigate the EPLs - both for sample size and number of cases found. The study has several strengths. First of all, due to the population-based research design and the high participation rate (84%), subjects in our study would be more likely representative of the general population in Feicheng. Secondly, by conducting the interview prior to endoscopic test for each participant, we are able to reduce the possible changes in their habits, lifestyle, and behavior after being diagnosed with the disease. Third, we collected comprehensive questionnaire data. And all subjects received the gold standard test (endoscopy with Lugol's iodine staining and biopsy) for EPLs, which allowed us to examine the numerous risk factors accurately.

Meanwhile, we should be cautious about the results interpretation due to limitations of the study. The first concern is recall bias, which is caused by the inaccuracy or incompleteness of the remembering information by study participants, and which is a common issue in cross-sectional study. Our well-trained investigators had tried their best to help every participant to fill out questionnaire forms. During data collection, study objectives and hypothesis were blinded to all the investigators and participants. Another potential problem must to be considered is sampling error. Generally, physicians would pick out one through three skeptical blocks of tissue for biopsy in one time endoscopy, the risk of false negative results might exist. What's more, our study lacked detailed information on environmental exposure. Although our findings indicated that low quality drinking water and bad house heating methods are risk factors for having EPLs, we are not able to explain the mechanisms underlying these associations. Future plans of our research include a follow-up study and an environmental investigation to confirm the observed associations in this study.

In conclusion, EPLs is brought on by a confluence of risk factors, which vary between different populations though. We should not perform identical strategy to prevent this disease, especially in an area with extremely high incidence rate. In Feicheng population, people who consume tobacco or alcohol may not be more vulnerable to EPLs/ESCC. Low-quality drinking water might raise the risk of having EPLs. Bad house heating methods associated with increased EPLs risk which should be held in high regard.

We greatly appreciate those individuals who took part in our study. Without their dedication and cooperation, our study could not have begun. In addition, our study has been supported by many research groups and organizations. We are very grateful for all the supports giving by investigators, clinicians and pathologists from Shandong Cancer Hospital, Shandong Cancer Control and Prevention office, Department of Biostatistics of Shandong University, Cancer Center of Feicheng Hospital, Centers of Disease Control, and Community Health Centers.