Background & Aims: According to the stage of tumor, it's hard suitable to predict the prognosis for gallbladder cancer, especially for node-negative gallbladder cancer. Therefore, we aimed to create a nomogram based on demographic and clinicopathologic characteristics to estimate individualized potential impacts on postoperative overall survival.

Methods: 789 patients with node-negative gallbladder cancer were selected from the Surveillance, Epidemiology, and End Results and randomly divided into training and internal validation group. Univariate and multivariate survival analysis were used to identify prognostic factors. The nomogram was constructed using Cox proportional hazards models. We evaluated the performance of the nomogram with Harrell's concordance index and calibration curve. The nomogram was externally validated in 115 patients with node-negative gallbladder cancer from the Sir Run Run Shaw hospital.

Conclusion: This nomogram can be used as a decision model to predict the outcomes of postoperative overall survival for node-negative gallbladder cancer, and may give useful guidance to clinicians for next treatment.

Gallbladder cancer (GBC) is one of the most common and aggressive biliary tract malignancies and has a low annual incidence [1], poor prognosis [1-3] and high mortality. Surgery is recommended as the first line therapy for patients with resectable gallbladder cancer [4], but 5-year survival rate is rather low, with approximately 5%. Lymph node (LN) status plays an important role in prognosis [5-7], i.e. positive LN status indicates a poor prognosis. Several different LNs scoring systems, such as tumor-node-metastasis (TNM), lymph node ratio (LNR) and log odds of positive LN (LODDS), can be used to evaluate the prognosis of GBC, but there are rare of scoring systems for LN-negative patients.

The incidental gallbladder cancer (IGBC) is the most common form of gallbladder cancer diagnosed today [8], and many patients present without lymphatic metastasis. Interestingly, the 5-year survival rate of T1N0 patients is only up to 30% compared with a 3% survival rate in T1N1 patients. Positive LNs mean a worse prognosis, but LN status cannot be a prognostic factor for node-negative gallbladder cancer patients. Therefore, various covariates may have an influence on overall survival (OS) of node-negative patients. Fan [9] et al reported that the more number of examined lymph nodes in patients with node-negative gallbladder cancer, the better outcomes of postoperative overall survival. Min [10] et al showed that tumor characteristics, such as tumor differentiation, can predict long-term outcomes after surgery in patients with GBC. Except that, the patients' characteristics also have effects on prognosis. Unfortunately, due to the absence of large, prospective, randomized, clinical trial data, it is difficult to know which patients with lymph node-negative GBC will have better outcomes of postoperative overall survival and who need additional treatment or intensive follow-up.

In the study, we created a nomogram to help clinicians and patients to estimate individualized outcomes of postoperative overall survival and make individual plans for next therapy. 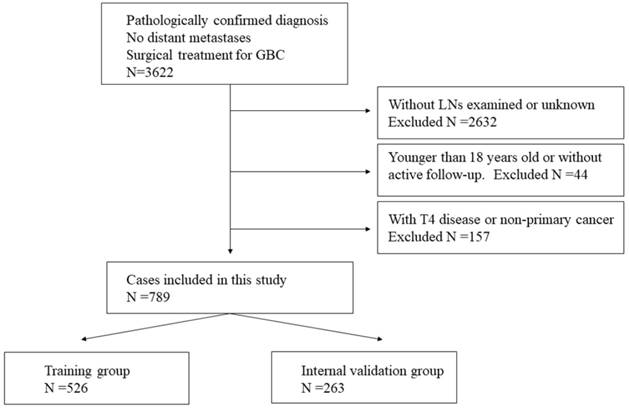 An initial query of SEER database (2004-2014) identified 3622 patients who underwent surgical treatment for GBC with negative LNs status and migration stage. Exclusion criteria were as follows: patients who were younger than 18 years old, with T4 disease, without primary gallbladder tumor, no LN was examined, without active follow-up. And the final study cohort included 789 patients. The complete patient selection flowchart was shown in Figure 1. The standardized patients' data, including patient demographics, tumor morphology, staging, treatment details, follow-up and so on, were collected. To develop the prognostic nomogram and validate it based on a random split-sample approach, using a computerized module, the 789 patients were randomly divided into training group (n=526) and internal validation group (n=263) in a two-to-one ratio. Moreover, according to the selection criteria above, 115 patients from Sir Run Run Shaw hospital (2007-2013) were selected as external validation group.

The primary end point of interest in this study was overall survival. Observed variables were age, sex, race, grade, histology, tumor size, pathologic T category, surgery type, No. of examined LNs and so on. In the training part, OS curves for different variable values were estimated using the Kaplan-Meier and compared using the log-rank test. Variables which showed significance in the univariate analysis (P< .05) were entered into multivariate regression survival analysis. Statistical analyses to identify prognostic factors were performed using the SPSS 24.0 (SPSS, Chicago, IL). According to the above statistical analyses, a nomogram, where we fitted an automated backward variable selection with respect to the Cox proportional hazards model, was performed using R software packages (http://www.r-project.org). In the validation and calibration part, the nomogram was subjected to 268 patients for internal validation of the primary training group, and external validation with 115 patients from Sir Run Run Shaw hospital. We evaluated the performance of the model with Harrell's concordance index (C-index) and calibration curves (1-, 3-, 5-year OS) and compared it with the 7th AJCC stage.

Demographic and clinicopathologic characteristics of training and validation group were shown in Table 1. A total of 789 patients were included as primary training group and internal validation group in the study from SEER database. There were 381 patients (48.3%) older than 70 years, and 537 of patients (68.1%) were female. Pathological examination showed GBC which consisted of 72.9% adenocarcinoma (NOS), 9.5% papillary adenocarcinoma and 8.7% adenocarcinoma with subgroup type, captured 91.1 percent of histological type. The most proportion of patients' grade and T category of tumors were moderate and T2, respectively. Surgical details indicated that 19.0% patients underwent radical surgery with liver, while 100% patients were performed with lymphadenectomy. The median survival time was 71.8 months (95% IC, 67.1 to 76.5). 115 patients with node-negative gallbladder cancer were taken as external validation group. Most patients were female (75.7%) as similar to training group, but the percent of patients who were younger than 60 years was up to 40.9%. The similar results of pathological examination and surgical details were shown in external validation group. The median survival time was 79.3 months (95% IC, 71.9 to 86.7).

Patients and tumor characteristics of the SEER database and SRRSH database.

A nomogram for 1-, 3-, 5-year OS was established on the basis of five significant factors (Figure 2). In the nomogram, the contribution to the overall survival trend from the T category was the maximum, and the one from the sex affected the minimum. Histology, age and No. of examined LNs also had made moderate contributions for OS. Interestingly, the more No. of examined LNs didn't mean the longer OS. For example, there was a 75 years old female patient with adenocarcinoma (T1aN0) and 8 LNs examined after surgery. According to the nomogram, her total points was about 15 points and the percent of 1-, 3-, 5-year OS was approximately 90%, 76%, 70%, respectively. However, if the patient (T1aN0) with 10 LNs examined only differed from the No. of examined LNs, the percent of 1-, 3-, 5-year OS was lower than those of previous.

Univariable and Multivariable Analysis with Cox Regression in Training Group.

Performance and Validation of the Nomogram

Nomogram for estimating the 1-,3-, 5- year OS for node-negative GBC patients. 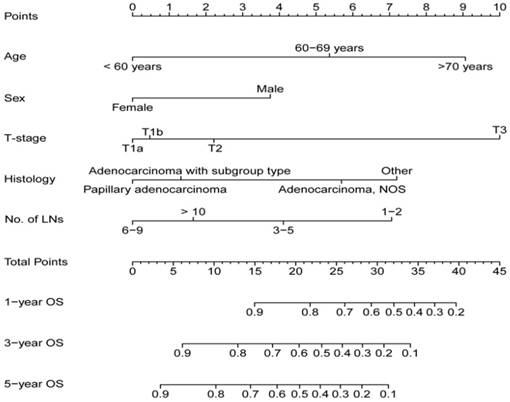 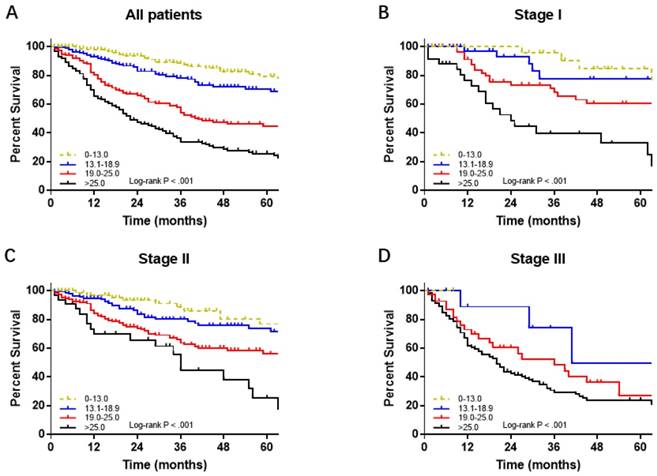 Nomogram has been increasingly popular and important in personalized cancer prediction [11], in which clinicians optimize the patients' therapeutic recommendations according to their specific and individual information. As one of the cancer prediction models, it has been used in various cancers, such as lung [12-14], breast [15-17], pancreas [18, 19] and prostate cancer [20-22] et al. Although the 7th AJCC stage system is widely applied for GBC to estimate OS, it cannot be an ideal model for node-negative GBC in prediction of OS. For node-negative GBC patients, only T-stage can be used to evaluate the survival time, because the values of N-stage and M-stage are constantly as 0. Therefore, we developed the nomogram based on patients, tumor characteristic and surgical details to estimate the OS of operable GBC patients.

Just as cancer prediction models usually consist of many variables, five prognostic factors were included in the nomogram according to the results of univariable and multivariable analyses. T-stage was one of the most important factors. Interestingly, there were some differences from previous decision-making systems. For example, general regularity in GBC is that the more No. of LNs examined, the better prognosis. Inadequate removal of LNs may result in the misclassification of LN-positive patients as N0, and the N-stage has been referred as one of the strongest prognostic factors for gallbladder cancer patients [5]. Patients with LN metastasis will have a shorter survival time and 30-40% increased risk of death, compared to patients without LN metastasis [23, 24]. Surgery remains the only effective and potentially recommended treatment for patients with resectable and node-negative GBC [4]. The early LN metastasis is a characteristic of gallbladder adenocarcinoma [25]. Some studies suggested that extended regional lymphadenectomy could improve survival compared with standard regional lymphadenectomy. For complete resection, extended surgical procedures, such as extensive lymphadenectomy and major hepatectomy, even common bile duct (CBD) resection or pancreatoduodenectomy, are often required [26]. However, the more No. of examined LNs is accompanied by higher risk of complications, because the removal of too many LNs may cause the side effects such as lymphatic leakage. Thus, for balancing the risk against the reward for each subgroup, the most appropriate subgroup of No. of examined LNs is not more than 10, but 6 to 9 in the nomogram for the node-negative GBC patients. Age also had a great influence on survival time in the present study as expected. Generally, elder patients possess a poorer tolerance of stress and a damaged compensatory mechanism, but younger patients usually show more aggressive of the biological behavior of malignant tumors. We found that the younger patients with node-negative GBC, the longer survival time. Wang [27] et al showed the similar results in gallbladder cancer. The outcomes of OS also depended on sex and histology. Interestingly, the percent of the female was higher than the male in the patients with gallbladder cancer, while the female had a better result of OS.

Validation of the nomogram is as important as development. For validating the nomogram, we chose one thirds of patients from SEER database at random as internal validation and 115 patients from SRRSH database as external validation. The calibration curves presented excellent agreement between predicted and observed outcomes in the 1-, 3-, 5-year OS in SEER database group. In addition, good agreement is also shown in SRRSH database group. At the same time, the nomogram showed greater discrimination in predicting OS, as the value of C-index was up to 0.724 and 0.716 in SEER and SRRSH database group, respectively. Moreover, there was sufficient preponderance over the 7th AJCC stage group in estimating 1-, 3-, 5-year OS. More importantly, the nomogram could further classify patients into four risk subgroups in each stage of node-negative GBC patients. Identifying subgroups of patients might have a positive influence on the future treatment. It can give physicians some guides and help them select patients who need additional treatment or intensive follow-up. Although the nomogram is better than the 7th AJCC stage group, it still has some limitations which need to be considered in the present study. As a population-based database, SEER provides us with the largest series of gallbladder cancer patients available, but some of the known survival predictors, are nearly all missing in the SEER data, such as some tumor markers and molecular factors. This study was performed using SEER database and, therefore, is limited to predictive factors available in this database. In addition, the data for external validation of nomogram is not from large, prospective, randomized and multicenter clinical trials. Other prognostic factors, which are in the molecular and gene fields, will be collected and used to improve this nomogram in the future study.

In conclusion, we developed and validated a decision model on basis of SEER and SRRSH database to predict the outcomes of postoperative overall survival for node-negative gallbladder cancer patients. Using this nomogram, clinicians may be able to obtain useful guidance to select who need additional treatment or intensive follow-up, which helps make individual therapies for these patients.

Mingyu Chen performed the research, Bin Zhang and Long Pan collected and analyzed the data, Mingyu Chen and Jiasheng Cao designed the research study and wrote the paper, and Xiujun Cai contributed to the design of the study. All authors read and approved the manuscript.