Advanced and chemotherapy-resistant ovarian cancer causes high mortality of ovarian cancer, and it is important to find safe and effective drugs to reduce the chemotherapeutic resistance of ovarian cancer. In our study, we attempted to clarify the resistance mechanisms of SKOV3/DDP cells in vitro and evaluated the sensitization to triptolide (TPL) in vivo. Our results indicated that the overexpression of AKT and p-AKT greatly enhanced the cisplatin (DDP) tolerance of SKOV3/DDP, and the combination of DDP+TPL had a significant tumour inhibition effect compared to DDP treatment (p<0.05), via reducing the expressions of p-PI3K, p-Akt, Survivin, VEGF and MMP-2, and the increase of Caspase-3. Collectively, these results suggest that the synergistic anticancer effect of TPL and DDP warrants their potential clinical applications in further.

Ovarian cancer is the main cause of death and accounts for substantial morbidity and mortality worldwide [1]. Epithelial ovarian cancer (EOC) belongs to one of the most common type of ovarian cancer, and is usually diagnosed at an advanced stage for the ineffective screening strategies. Though a combination of cisplatin‑based chemotherapy and surgical resection has prolonged clinical remission for EOC patients, while only a 30% overall survival is obtained for patients with advanced disease, mainly caused by the chemoresistance [2]. Moreover, the severe side effects of cisplatin (e.g., severe toxicity, functional impairment) have also limited its clinical applications [3-5]. Therefore, it is important to find a suitable sensitizer to cisplatin for EOC patients, and clarify its mechanisms of action.

As the important source of emerging preventive and therapeutic agents, phytochemicals play a key role in cancer treatment, and triptolide (TPL), purified from the Thundergod vine, Tripterygium wilfordii Hook. f, have been regarded as one of the most promising anti-inflammatory agents, and has been widely used to treat a variety of cancers and rheumatoid arthritis [4, 6-10]. However, little study has been done to evaluate its sensitisation effect on cisplatin-resistant EOC.

In previous work, our group indicated that TPL had synergistically enhanced the cytotoxicity of cisplatin, and promoted the apoptosis of the SKOV3PT cells through mitochondria - derived ROS accumulation [9]. However, little work was done to explore the potential role of PI3K/Akt pathway in cisplatin-resistant EOC though silencing the PI3K/Akt signal channel showed a positive role in the treatments of other cancers [11]. As we know, the PI3K/Akt pathway plays a key role in regulating the cell cycle, and it can directly regulate tumourigenesis, metabolism, cell growth, proliferation, angiogenesis, survival and apoptosis [12, 13]. In various cancers, PI3K/Akt pathway is overactive, therefore this pathway shows an important role in the development of various therapies [14].

In our work, we investigated the role of the PI3K/Akt pathway in cisplatin-resistance EOC using SKOV3/DDP cells and further studied the therapeutic and sensitisation effects of TPL by reducing the production of pathway-related proteins using animal model.

SKOV3/DDP cells were cultured at density of 19,000 cells/cm2. Twenty-four hours after plating, the scramble siRNAs or negative control FAM were mixed with RNAi-Max transfection reagent, and the best transfection concentration and siRNA fragments were determined using a flow cytometry assay.

Whole-cell lysates of samples were prepared by cell lysis buffer, containing 1 mM PMSF and protease inhibitor cocktail [4]. Protein concentrations were determined using polyacrylamide gel electrophoresis. After the protein was electrotransfered to polyvinylidene difluoride membranes, 5% nonfat milk in TBST was used to block nonspecific binding sites for 1 h at RT. Primary antibodies were added and incubated with membranes overnight at 4 °C, and then washed using TBST, then appropriate HRP-conjugated secondary antibody was added and incubated for 1 h.

To develop primary tumour xenografts, an insulin syringe was used and injected in the BALB/c-nu nude mouse with 20 μl PBS containing 500,0000 SKOV3 /DDP cells. Mice were checked daily. When the tumour xenografts in mice reached a size of 100 mm3, PBS (50 ml/kg/d every day), DDP (4 mg/kg/d on the 1 day and 8 day), TPL (0.15 mg/kg/day every day), DDP+TPL (4 mg/kg/d of DDP on 1 day and 8 day, 0.15 mg/kg/day of TPL every day) was injected i.p. into the mice. At the end of experiment, the mice were sacrificed and their tumours were removed, measured, and weighed. This study had gotten the approval by the Ethical Committee of the second affiliated hospital of Nanchang University, and all methods used in the present study were in accordance with the approved guidelines.

Sample sections were soaked in xylene and rehydrated in alcohol. Then, samples were covered with 50 μL of proteinase-K solution and incubated at RT for 25 min, and 3 % H2O2 was used to inactivate their endogenous peroxidase activity. The TUNEL assay was done using a kit (Trevigen, MD, USA) based on the manufacturer's protocol. A positive control and negative control were performed, and four randomly chosen fields per sample with at least 100 cells were determined at high magnification to calculate the percentage of TUNEL-positive nuclei.

Sample sections were fixed in 10% buffered formalin, and were then embedded in paraffin and were mounted on slides. After deparaffinisation and rehydration, sample sections were soaked in 3% hydrogen peroxide to inactive endogenous peroxidase activity, and 10-mM sodium citrate (pH 6.0) was used for antigen retrieval by microwaving. Samples were then incubated 2.5% horse serum and with antibodies overnight at 4 ºC, and were detected using the Avidin-Biotin Complex System (Vector Laboratories). 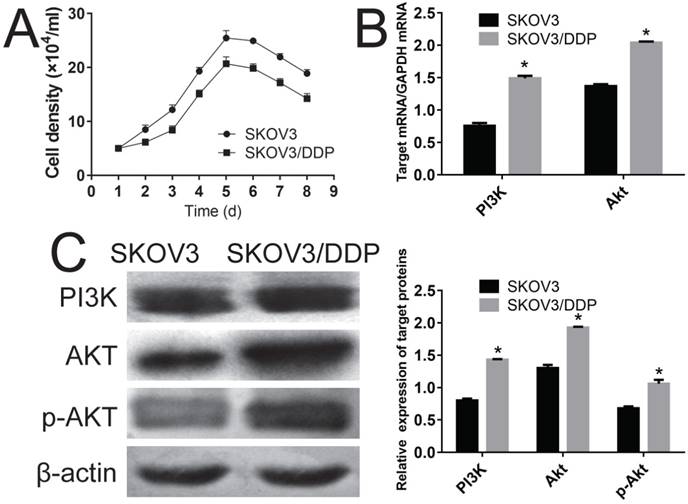 Verification of the mechanism of SKOV3/DDP cells

To confirm the role of PI3K/Akt channel in the cisplatin resistance of SKOV3/DDP cells, specific siRNA was performed to interfere with the production of AKT in SKOV3/DDP cell line. First, three different transfection concentrations of 50 nM, 80 nM and 100 nM were tested; 50 nM was chosen for the analysis of comparable transfection efficiency (Fig S1). Three siRNA fragments named as siRNA-1, siRNA-2 and siRNA-3 were used, and siRNA-2 was chosen for its significant inhibition efficiency with respect to Akt expression (85%, P<0.05) (Fig S2). Just as expected, the transfection of siRNA-2 arrested SKOV3/DDP cells in the G0/G1 phase (up to 44.9% from 29.2% in control) and made a typical subdiploid peak (up to 45.7% from 4.2%) on the DNA histogram (Fig 2, P<0.05). Moreover, the Western blot results indicated that transfection of siRNA-2 significantly reduced the overexpression of Akt and p-Akt in SKOV3/DDP cells (Fig 2, P<0.05). 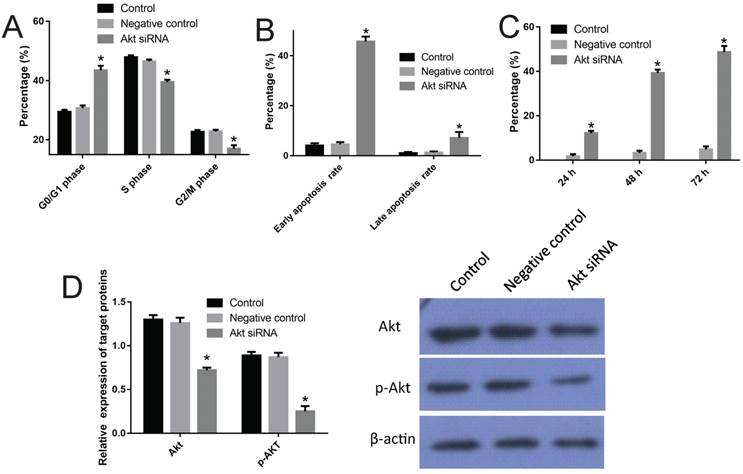 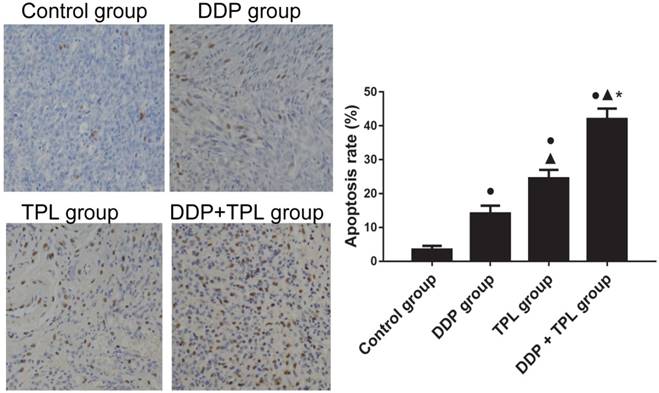 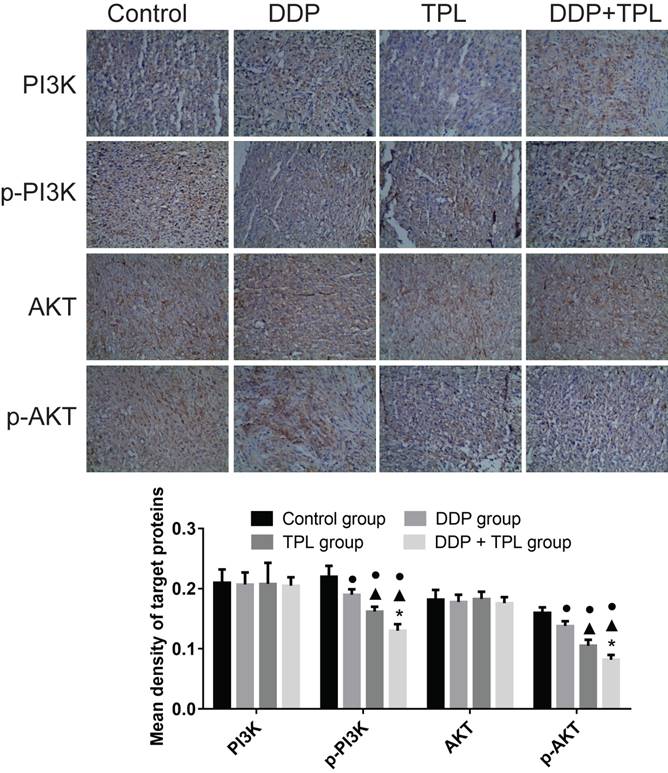 To better understand the sensitisation of mechanism of TPL with respect to DDP, protein production of PI3K, p-PI3K, Akt and p-Akt was compared among the control group, DDP group, TPL group and DDP+TPL group. In Fig 4, the protein productions of PI3K and AKT remained stable, while the levels of phosphorylated PI3K and AKT significantly decreased after DDP, TPL, or DDP+TPL treatment (P<0.05). 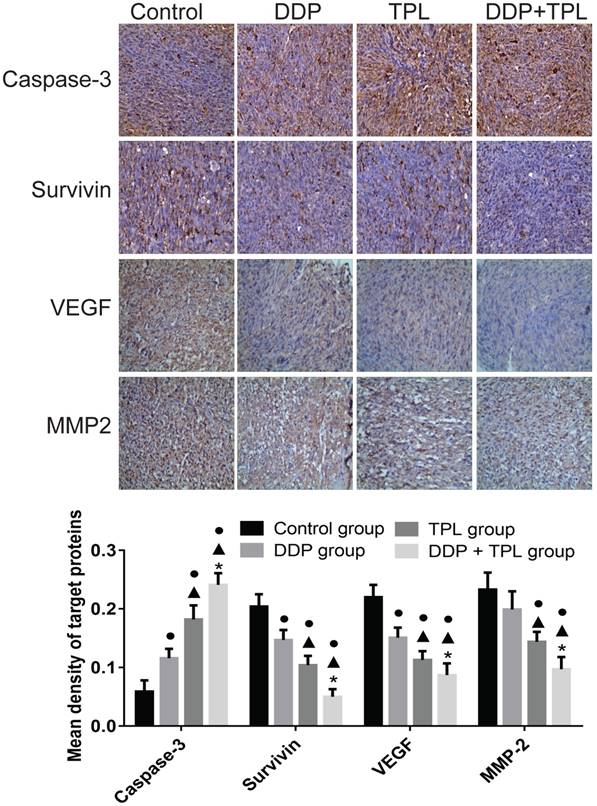 Cisplatin has been used as the first line for cancer treatment, including ovarian cancer, small-cell lung cancer, lymphomas, bladder cancer, cervical cancer and germ cell tumours. Cisplatin can bind to DNA and cause the DNA strands to crosslink, which triggers cells to die in a programmed way. Although the combination of platinum‑based chemotherapy and the apparent curative resection has significantly improved survival length of patients, the serious adverse side-effects and drug resistance hindered its application in ovarian cancer therapy [15].

Therefore, the naturally occurring and plant-derived compound is solely studied as potential therapies for cancers [16]. As phytochemicals can influence multiple signalling channels and enhance the efficiency of conventional chemotherapy and radiation therapy, they may present synergistic effects even a lower doses is used [17]. To date, TPL had been investigated for its pleiotropic anticancer activities, via inhibiting the proliferation and inducing apoptosis of different cancers both in vitro and in vivo, and it also shows a sound effect on drug‑resistant multiple myeloma and cervical cancer [6, 9, 18-23].

Currently, various small molecule signal transduction inhibitors have been used to treat cancers, and some of them are undergoing clinical evaluation, and these inhibitors offer significant promise in prostate cancer and have recently become standard therapy in renal cell carcinoma. As one of the most important channels, the PI3K/Akt pathway is thought to be up-regulated in about 40% of prostate cancers, and molecular changes of PI3K/Akt/ signalling channel have been regarded to differentiate benign from malignant prostatic epithelium, and have a strong connection with increasing cancer stage, grade, and risk of biochemical recurrence [24-26].

Classically, cancer was regarded as a set of diseases that were caused by progressive genetic abnormalities (include mutations in tumour-suppressor genes, oncogenes and chromosomal abnormalities). Caspase-3 belongs to a member of the cysteine protease family, playing a crucial role in apoptotic channels by cleaving a variety of key cellular proteins [27], while Survivin belongs to a member of the inhibitor of apoptosis (IAP) family that inhibits caspase activation, thereby negatively regulation the apoptosis or programmed cell death [28]. Other proteins, e.g. vascular endothelial growth factor (VEGF), which supplies adequate blood for tumour growth [29], and MMP-2,the altered expression and activity levels of which is strongly implicated in the progression and metastasis of various cancer [30-32], were also evaluated. Similar to the PI3K/Akt pathway, the combination of DDP and TPL significantly increased the expression of Caspase-3 (P<0.05) and decreased the production of Survivin, VEGF and MMP-2 (P<0.05), which indicated the promoting effect of DDP + TPL on caspase-3 expression as well as an inhibitory effect on Survivin, VEGF and MMP-2, contributing to tumour apoptosis and tumour suppression (Fig 4 and Fig 5).

In conclusion, our work indicated that TPL had significantly down-regulated the expression of Survivin and the phosphorylations of PI3K and Akt, which significantly enhanced the production of Caspase-3. And the overexpression of Caspase-3 and the reduction of VEGF and MMP-2 caused by TPL had markedly promoted cell apoptosis and tumour suppression (Fig 6). Therefore, we propose that TPL assists DDP in lowering the resistance of EOC to cisplatin, which indicates that TPL is a promising agent that should be further evaluated in combination with other chemotherapeutic agents for the treatment of human ovarian cancer. However, our findings are based on one cisplatin resistant ovarian cancer cell line derived from SKOV3 cells, which might not be a true representative of high grade serous ovarian cancer - the most common subtype of epithelial ovarian cancer and responsible for most ovarian cancer deaths, and these findings may be cell line specific and not be clinically truly relevant. 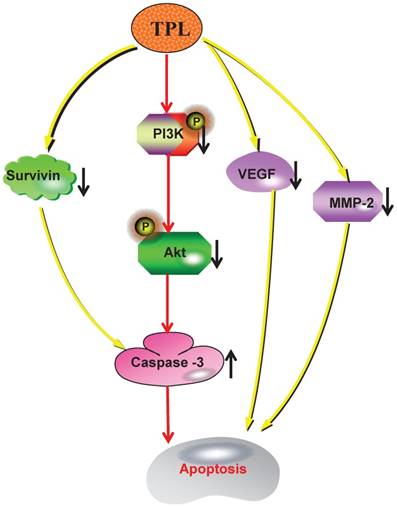 All data generated or analyzed during this study are included in this published article.

This study was carried out in strict accordance with the recommendations in the Guide for the Care and Use of Laboratory Animals of the National Institutes of Health. The protocol was approved by the Committee on the Ethics of Animal Experiments of the Second Affiliated Hospital of Nanchang University.

15. Berkenblit A, Cannistra SA. Advances in the management of epithelial ovarian cancer. The Journal of reproductive medicine. 2005;50(6):426-38