Background: Early biochemical recurrence (BCR) was considered as a sign for clinical recurrence and metastasis of prostate cancer (PCa). The purpose of the present study was to identify a lncRNA-based nomogram that can predict BCR of PCa accurately.

Materials and methods: Bioinformatics analysis, such as propensity score matching (PSM) and differentially expressed genes (DEGs) analyses were used to identify candidate lncRNAs for further bioinformatics analysis. LASSO Cox regression model was used to select the most significant prognostic lncRNAs and construct the lncRNAs signature for predicting BCR in discovery set. Additionally, a nomogram based on our lncRNAs signature was also formulated. Both lncRNAs signature and nomogram were validated in test set. GSEA was carried out to identify various gene sets which share a common biological function, chromosomal location, or regulation.

Conclusion: In conclusion, our lncRNAs-based nomogram is a reliable prognostic tool for BCR in PCa patients. In addition, the present study put forward the direction for the further investigation on the mechanism of PCa progression.

Although radical surgery or radiation is demonstrated to be an effective treatment for patients with localized prostate cancer (PCa), approximately 20% of these patients will develop biochemical recurrence (BCR).[1] BCR was defined as two or more consecutive PSA values of >0.20 ng/mL. Previous studies suggested that BCR is a significant predictor for cancer progression, even cancer-specific mortality.[2, 3] Therefore, it is critical to identify the patients with high-risk of BCR after radical prostatectomy (RP).

Many clinical factors like Gleason score, TNM stage and margin status have served in previous models for prediction of BCR.[4, 5] Among these factors, Gleason score is a dominant prognostic factor. However, sampling error and subjectivity in assessing Gleason score is notable confounding factors. Recently, gene expression signatures turn out to have prognostic value in breast cancer and changed clinical care. Hence, previous studies tried to develop gene molecular signature to enhance the predictive power of clinical factors.[2, 6] However, few studies investigated the potential role of long noncoding RNAs (lncRNAs) as novel signatures for predicting BCR. LncRNAs, defined as transcripts containing ≥ 200 nucleotides without coding function, were once considered as transcriptional “noise”.[7, 8] Recently, more and more studies lncRNAs have revealed that lncRNAs play important roles in various biologic processes such as gene regulation, cell proliferation, migration and apoptosis.[9] LncRNAs could act as proto-oncogene or anti-oncogene. Apart from their role in tumor initiation and progression, lncRNAs also have turned out to be promising biomarkers.[10-12]

Up to now, bioinformatics analysis has been extensively applied in molecular experiments and clinical practice. Hence, the aim of our study was to identify significant lncRNAs associated with early BCR by bioinformatics analysis of lncRNAs sequencing data downloaded from The Cancer Genome Atlas Project (TCGA) database. Using Cox regression analysis, a five lncRNAs signature and a nomogram based on the lncRNAs signature that could predict early BCR were constructed. This nomogram may help identify patients with PCa at high-risk of early BCR. Extensive surveillance and aggressive treatment may be needed for these patients. In addition, analysis of the pathway and function of the five lncRNAs can bring new insights into the underlying molecular mechanism of PCa.

The raw lncRNAs sequencing data (Fragments Per Kilobase Of Exon Per Million Fragments Mapped, FPKM) from PCa samples were obtained from TCGA data portal. After that, lncRNAs expression levels were summarized into transcripts per kilobyte million (TPM) values.

Patients from discovery set were selected and divided into early BCR group and long-term BCR survival group (no BCR after a minimum of 5 years follow-up). To reduce the bias due to confounding factors that may be involved in early BCR significantly, Propensity score matching (PSM) analysis was performed between the two groups. Age, lymph node status, T stage, and Gleason score were well adjusted. Patients with early BCR and patients with long-term BCR survival were matched 1: 1. Eventually, 39 paired patients were identified. To find different lncRNAs expression between early BCR group and long-term BCR survival groups, differentially expressed genes (DEGs) analysis was conducted using linear models for microarray data (LIMMA) method. Only lncRNAs with P < 0.005 were defined as significantly expressed lncRNAs and considered as candidate lncRNAs for further bioinformatics analysis.

The relationship between lncRNAs and clinical features was assessed by t test for continuous variables and χ2 test for categorical variables. To assess associations between lncRNAs and BCR, Kaplan-Meier curves and log-rank tests were used. To do the multivariable survival analysis, Cox regression model was used. The concordance index (C-index) was performed to evaluate the discriminatory power of the signature. Calibration plots were generated to assess whether actual outcomes approximate predicted outcomes for nomogram. The x-axis represents the prediction calculated use of the nomogram, and the y-axis represents the actual freedom from BCR. All statistical analyses were performed using R (version 3.4.2, www.r-project.org). All statistical tests were 2-sided, and p-value < 0.05 was considered statistically significant.

LASSO Cox regression analysis was performed to build a prognostic signature, which selected five lncRNAs (RP11-783K16.13, RP11-727F15.11, PRKAG2-AS1, AC013460.1, CRNDE) from the 105 lncRNAs identified before. LASSO coefficient profiles of the 105 lncRNAs are presented in Figure. 1B. A formula to calculate the risk score for their risk of BCR was derived based on their individual five lncRNAs expression levels weighted by their regression coefficients as follows:

Clinical-pathological features of PCa patients in early BCR and long-term BCR survival groups before and after PSM. 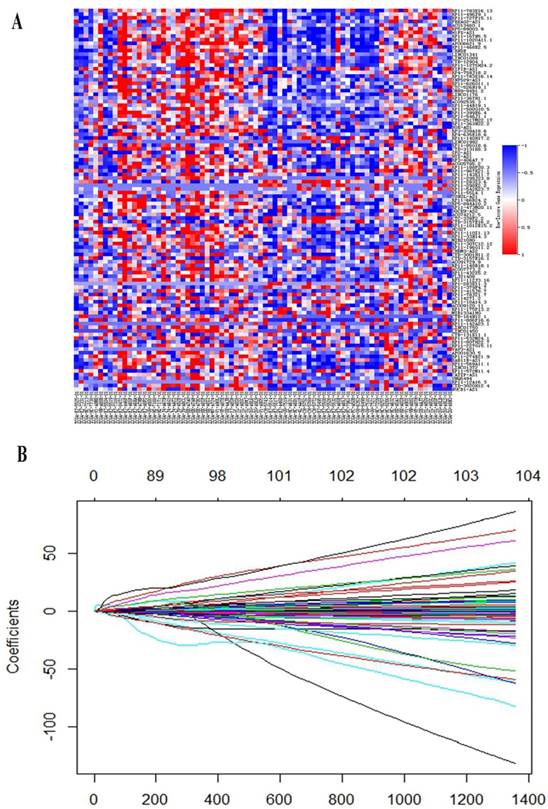 To predict the probability of BCR, we constructed a nomogram that integrated our lncRNAs signature in discovery set. The predictors included age, T/N stage, Gleason score and lncRNAs signature. (Figure 3A) The C-index of the nomogram was 0.74.

Time-dependent ROC curves at 2, 3, and 5 years and Kaplan-Meier survival analysis between patients with low risk scores and high risk scores in discovery set (A), test set (B) and entire dataset (C). 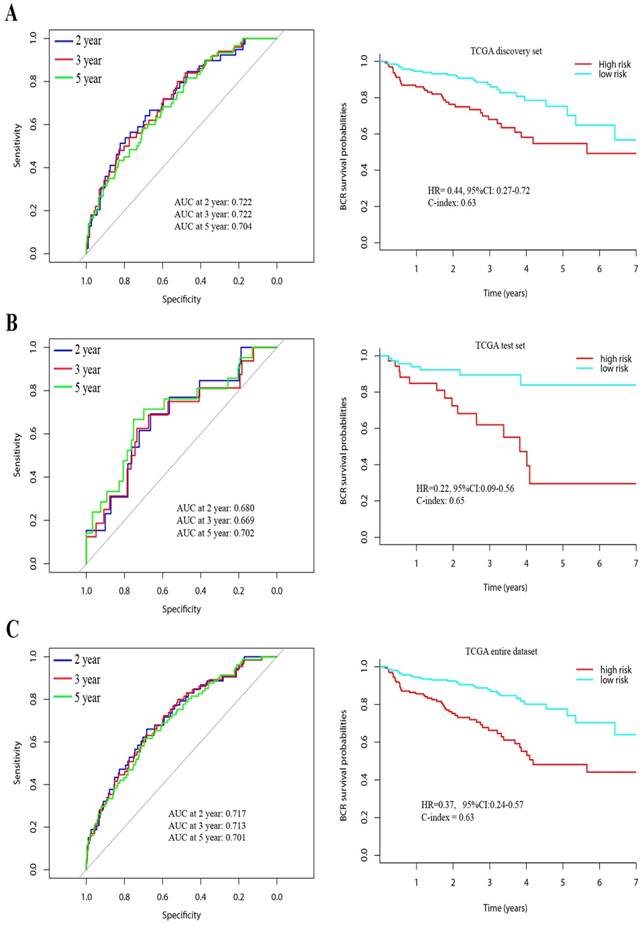 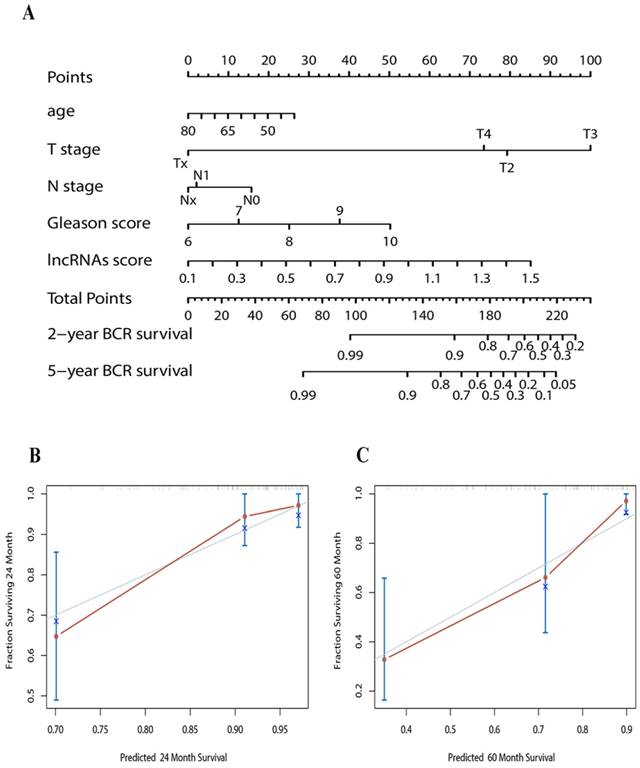 Most patients with early BCR will progress to clinical recurrence or metastasis and need immediate intervention. Patients with indolent cancer can be followed without immediate treatment.[3] To avoid unnecessary overtreatment of indolent disease, precise prediction that can stratify patients into high or low-risk groups has a significant clinical value.

Previous studies had reported various gene signatures that could provide prognostic information for PCa BCR.[2] However, few studies focused on the role of lncRNAs as novel signatures for PCa BCR. LncRNAs have shown its important roles in biological processes in various cancers, such as proliferation and angiogenesis of cancer cells.[15] In previous studies, lncRNAs could be used not only as a novel biomarker in the diagnosis of cancers but also as an adjunct to improve the specificity and sensitivity of existing biomarkers.[16] Therefore, lncRNAs were selected as potential parameter in our novel signature for prediction of BCR in PCa. Subsequently, a nomogram based on lncRNAs signature was also constructed in our study.

Five lncRNAs (CRNDE, PRKAG2-AS1, RP11-783K16.13, RP11-727F15.11 and AC013460.1) were identified significantly associated with PCa BCR in this study. Our five lncRNAs signature showed significant discrimination of the BCR both in discovery and test set. Besides, the lncRNAs-based nomogram provided much better discrimination of the BCR in both sets. Despite some biases in the development of lncRNAs signature, the validation in the test set indicated that the bias may not be large in this instance. Early BCR was considered as a sign for clinical recurrence metastasis. Overestimating the risk of patients that more suitable for active surveillance implied a higher disease burden due to overtreatment. Therefore, our nomogram that could identify patients into high or low-risk group of early BCR may help to select appropriate treatments and better clinical management in PCa patients.

In 2018, TA Bismar established a gene molecular signature (HDDA10) for predicting PCa BCR with AUC = 0.65.[6] Nevertheless, our five lncRNAs signature showed better discriminatory power with AUC = 0.72 in discovery set, 0.68 in the test set and 0.72 in the entire dataset. Our lncRNAs-based nomogram could provide new tools and insights on adjuvant therapies in future randomized controlled trials (RCTs). Patients with high-risk of BCR could receive adjuvant or other systemic therapies, while patients with low-risk could be entered into the group with active surveillance. Therefore, evaluation of treatments could be assessed more accurately.

In our five lncRNAs signature, CRNDE was certified that could regulate PI3K/Akt/Wnt/β-catenin axis to exert its oncogenic role in Hepatocellular carcinoma cell proliferation and growth.[17] In addition, CRNDE could promote cervical cancer cell growth, metastasis and progression of bladder cancer.[18, 19] Ding J suggested that CRNDE may promote colorectal cancer cell proliferation via epigenetically silencing DUSP5/CDKN1A expression.[20] Xie H demonstrated that CRNDE may modify susceptibility for various cancers and serve as a new predictive factor for prognosis and diagnosis in various cancers.[21] Hence, these previous studies proved the role of CRNDE in our signature was reasonable and reliable from the other aspect. However, the remaining four lncRNAs had not been investigated before. The future study may focus on these lncRNAs and investigate their function in PCa. Furthermore, these lncRNAs may have potential value in molecular targeted treatments. Although most lncRNAs are not yet functionally annotated in PCa, this study indicated the associated biological signaling pathway of the five lncRNAs through GSEA. The potential molecular function may put forward the direction for the further study on the mechanism of PCa progression.

In a word, a lncRNAs signature that could predict PCa BCR was identified by bioinformatics analysis. Additionally, a lncRNAs-based nomogram was also constructed. Our results showed that the nomogram can effectively classify patients into high or low-risk group of BCR. This nomogram comprising lncRNAs signature might help clinicians selecting personalized clinical management. Additional studies are needed to validate our results and further RCTs can test the role of this nomogram for prediction of the efficacy and safety of adjuvant therapy. In addition, functional studies are also required for better understanding the molecular mechanism in PCa.