Ophiopogonin-B (OP-B) has been reported to suppress metastasis and angiogenesis of adenocarcinoma A549 cells in vitro and in vivo. More and more evidences indicate that inflammatory microenvironment facilitates tumor metastasis. Digital Gene Expression (DGE) analysis of non-small cell lung cancer (NSCLC) cell lines showed that OP-B downregulated the expression of linc00668, which promoted progression of cancer. Herein, we simulated the inflammatory microenvironment by co-culturing A549 cells with LPS-treated THP-1 cells and found that the level of linc00668 increased significantly in the mock group, while OP-B treatment inhibited the level of linc00668 and reversed epithelial-mesenchymal transition (EMT) induced by linc00668. In addition, overexpression of linc00668 in A549 cells suppressed the expression of E-cadherin and induced expression of N-cadherin, while OP-B treatment reversed these changes. Bioinformatic prediction and dual-luciferase reporter gene assay validated that linc00668 sponge miR-432-5p and at last acted on EMT to execute the anti-migration function of A549 cells under inflammatory microenvironment. Taken together, OP-B inhibits metastasis of A549 cells via the linc00668/miR-432-5p/EMT axis.

Non-small cell lung cancer (NSCLC) accounts for approximately 80~85% of all lung cancer cases, mainly including adenocarcinoma and squamous cell carcinoma. Despite remarkable advances in clinical diagnosis and treatment, the average five-year survival rate of NSCLC patients is only 16% in the USA, and <10% in the UK[1, 2]. Adenocarcinoma is the most common type of NSCLC, which has high mortality due to its metastasis at an early stage [3, 4]. Therefore, preventing metastasis is very important for improving curative effect and prolonging the life of patients.

Increasing evidences indicated that inflammatory microenvironment facilitated tumor metastasis by enhancing epithelial-mesenchymal transition (EMT) [5, 6], while the underlying mechanisms remained to be validated. Long non-coding RNAs (lncRNAs) are a class of RNA transcripts which usually longer than 200 nucleotides in length [7, 8]. Recently, lncRNAs have emerged as important regulators of physiological and pathological processes [9, 10]. LncRNA-dysregulation has been reported to be correlated with tumor development [11, 12], and recent studies have revealed an essential role of lncRNAs in regulating EMT and tumor metastasis [13]. For example, linc00668 has been reported to be up-regulated in gastric cancer tissues and serves as an independent predictor for overall survival of gastric cancer patients [14].

Ophiopogonin-B (OP-B) has been reported to suppress metastasis and angiogenesis of adenocarcinoma A549 cells in vitro and in vivo [15], while the underlying mechanisms remained to be elucidated. In this study, digital gene expression (DGE) analysis and quantitative RT-PCR (qRT-PCR) assay validated that linc00668 is significantly inhibited in A549 cells by OP-B. Herein, we aimed to identify the role of linc00668 in the metastasis of A549 cells under inflammatory microenvironment, and to investigate the regulation effect of OP-B on the process of linc00668-regulated metastasis of A549 cells.

A549, 293T and THP-1 cells were obtained from the Cell Bank, Chinese Academy of Sciences (Shanghai, China), and cultured in DMEM-F12 medium (Gibco, Australia) supplemented with 10% FBS, 100 U/mL penicillin and 100 μg/mL streptomycin (Gibco, Australia) at 37℃ in a humidified 5% CO2 incubator.

A549 cells at exponential stage were used for transfection. Before transfection, 1 × 106 A549 cells were cultured in 6-well plates with 2 mL complete medium for 24 h until they were 90% confluent. The over-expression vector of linc00668 was constructed in pcDNA3.1 (+) by Genscript which purchased from Nanjing Realgene Inc (Nanjing, China). The vectors and microRNAs were transfected, respectively, into A549 cell line by Lipofectamine2000 reagents and cultured with Opti-MEM serum-free medium following the instructions.

The cells were collected and lysed with cell lysis buffer (Beyotime, Shanghai, China). Samples of the lysates were separated on 12% SDS-PAGE gels and transferred to nitrocellulose filter membranes. The membranes were incubated with primary antibodies at 4 °C overnight, including Vimentin, E-cadherin, N-cadherin, ZO-1, ZEB1, Stat3, Stat5 (CST, USA) and β-actin (Santa Cruz, USA), followed by incubation with an HRP-conjugated anti-mouse or anti-rabbit secondary antibody separately. Then immunoreactivity was detected by enhanced chemiluminescence (ECL) (Bio-Rad, USA). Quantitative analysis was performed by Image Lab™ software.

Total RNA was isolated from cells using TRIzol reagent (Invitrogen, USA). For mRNA and lncRNA quantification, the RNA was reverse transcribed into cDNA with a RevertAid First Strand cDNA Synthesis Kit (Thermo Fisher, USA). EvaGreen 2× qRT-PCR MasterMix-Low ROX (abm, Canada) was used for quantitation with specific primers for the mRNA and lncRNA. GAPDH was used as an internal control. For miRNA quantification, reverse transcription was performed using an miRNA First Strand cDNA Synthesis (Stem-loop Method) Kit (Sangon Biotech, Shanghai, China). A MicroRNA qRT-PCR Kit (SYBR Green Method) (Sangon Biotech, Shanghai, China) was used for quantitation with specific primers for miRNA, and U6 was used as an internal control. The primer sequences were listed in Table S1. All quantitative real-time PCR experiments were performed with an Agilent Technologies Stratagene Mx3000P system (Agilent Technologies, USA). The data was processed with the 2-ΔΔCt method, and the fold changes were normalized to the expression of the internal controls.

Transwell invasion assay was performed using 8.0 μm Transwell Permeable Supports #3422 (Corning, USA). Cells were harvested 24 h after transfection and 5×104 cells suspended in 100 μl serum-free medium were seeded into the upper chamber pre-coated with Matrigel Matrix (BD Biosciences, USA), and 600 μl medium containing 10% FBS was added to the lower chamber. After incubation for 24 h, cells that did not invaded through the membrane were mechanically removed with a cotton swab. Next, 4% paraformaldehyde was used to fix the cells on the bottom surface of the membrane for 10 min, and then cells were stained with a 0.4% crystal violet solution. The invading cells were imaged using a digital microscopy (Leica, Germany).

In our previous study, we have reported that OP-B inhibited metastasis of A549 cells in vitro and in vivo. Herein, we established a co-culture system to investigate whether OP-B affected EMT of lung adenocarcinoma cells in the inflammatory microenvironment. Firstly, A549 cells were co-cultured with LPS-stimulated THP-1 cells for 24 h, after that the cells were treated by 5 or 10 μmol/L of OP-B for 24 h. For aberrant Stat3, 5 signaling playing important role in chronic inflammation conditions [16, 17], we then detected the level of Stat3 and Stat5 by western blot, the results showed that the levels of Stat3 and Stat5 were all stimulated under the co-culture condition, while 5 or 10 μmol/L of OP-B treatment significantly decreased the levels of Stat3 and Stat5 (Figure 1A-B).

Then effects of OP-B on the invasion ability of co-cultured A549 cells were evaluated by transwell assay, and the results showed that OP-B prevented the migration of co-cultured A549 cells across the transwell chamber (Figure 1C-D). More importantly, the results of western blot showed that co-culture decreased the expression of epithelial markers E-cadherin and increased the expression of mesenchymal markers N-cadherin and Vimentin. However, OP-B treatment reversed these changes (Figure 1E-F). Meanwhile, the expression of Vimentin, ZO-1 and ZEB1 were not changed by the treatment. These results indicated that OP-B inhibited the migration of A549 cells under the inflammation microenviroment by reversing the EMT markers E-cadherin and N-cadherin.

Effects of linc00668 on lung cancer cell migration and invasion

It's known that Stat3 promotes metastasis by enhancing EMT-associated signaling pathway. In order to find out the underlying mechanisms that OP-B regulating the EMT pathway and whether Stat3 was included in the pathway, we reanalyzed the transcriptome date performed before and carried out bioinformatic analysis.

Similarly, through co-culture with LPS-stimulated THP-1, we set up an inflammation microenvironment for A549 cells, detection of linc00668 by qRT-PCR showed that the level of it increased significantly in the mock group (P<0.001), while OP-B treatment decreased the level of linc00668 (P<0.01) (Figure 2E).

OP-B inhibits the migration of A549 cells co-cultured with LPS-challenged THP-1 cells. (A~B), Levels of Stat3 and Stat5 were detected by western blot assay with specific antibodies, β-actin was used as a control. (C~D), Effects of OP-B on the migration of cells across the Transwell chamber in the co-culture system. Images are representative of three independent experiments. (E~F), Effects of OP-B on the levels of EMT-related markers in co-cultured A549 cells. Levels of E-cadherin, ZO-1, N-cadherin, ZEB1, and Vimentin were detected by western blot assay, β-actin was used as a loading control. Error bars represented mean ± SD from three independent experiments. (*), P < 0.05; (**), P < 0.01; (***), P < 0.001. 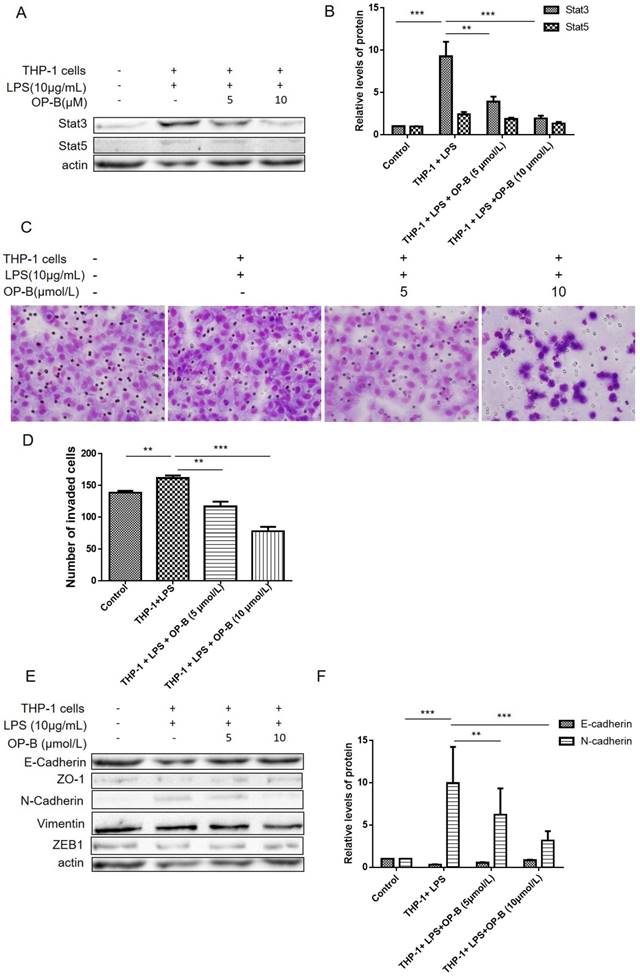 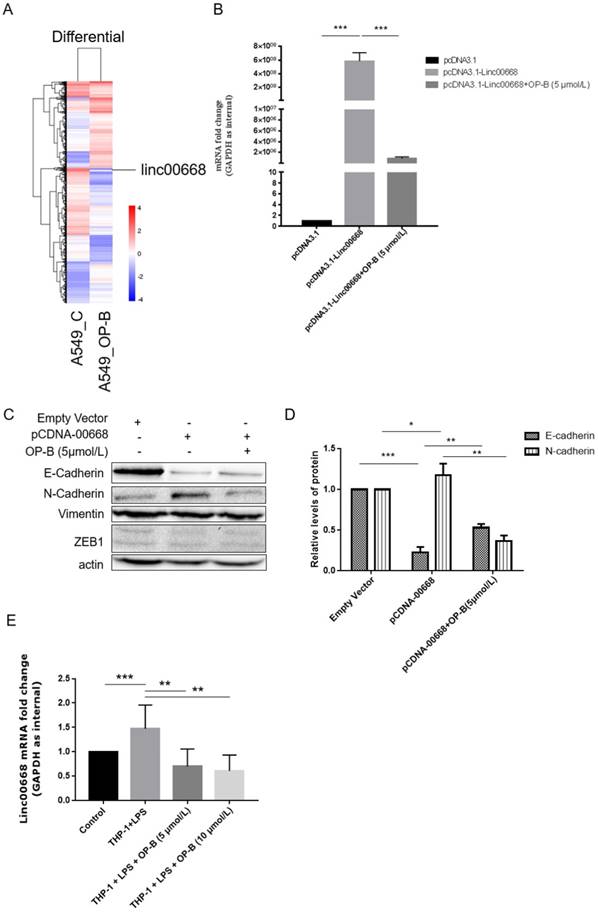 As shown in Figure 3B, co-transfection with pmirGLO-linc00668-WT vector and miR-432-5p mimic reduced luciferase reporter activity significantly in 293 T compared with the control group (P<0.01). Results of qRT-PCR showed that OP-B treatment enhanced the level of miR-432-5p in A549 cells (P<0.05) (Figure 3C). Following results of qRT-PCR showed that overexpression of miR-432-5p in A549 cells resulted in the increasement of E-cadherin or reduction of Vimentin significantly (P<0.05) (Figure 3D). Meanwhile, the results of western blot also validated that miR-432-5p could inhibit the EMT signaling pathway (Figure 3E).

More and more evidence showed that increasement of inflammatory cells and soluble inflammatory factors like chemokines and cytokines in primary cancer sites are strongly associated with poor prognosis due to metastasis [18, 19]. As an important member of inflammation signal pathway, Stat3 plays a significant role in the occurrence, development, and invasion of tumors [17]. Activated Stat3 can destroy to varying degree extracellular matrix and lead to the degradation and destruction of basement membranes, providing suitable environment for the early metastasis of tumor cells [17, 20]. In addition, Stat3 can also promote EMT process and propel the transformation of chronic inflammation to cancer [20, 21]. 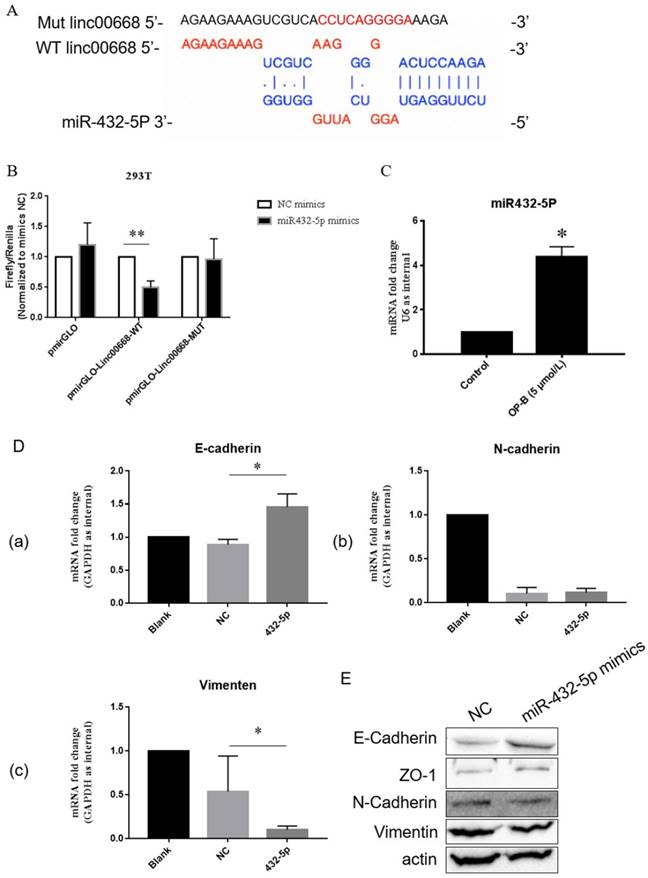 A schematic model of the molecular mechanisms associated with OP-B- regulated metastasis in A549 cells. OP-B inhibited the process that linc00668 sponge miR-432-5p and at last acted on EMT to execute the anti-migration function of A549 cells under inflammatory microenvironment. 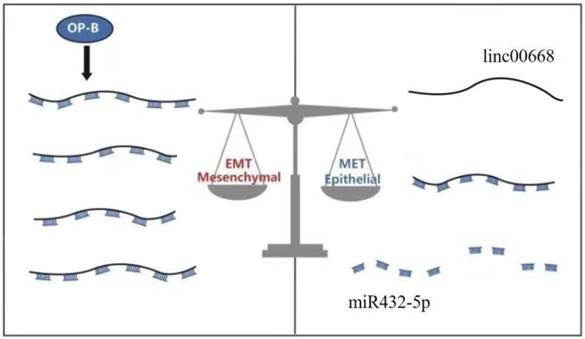 Natural compounds from traditional Chinese medicine have potential in inhibiting metastasis of cancer cells. Our previous study found that OP-B inhibited the migration and metastasis of A549 cells in vitro and in vivo [15], whether it inhibits cancer cell-metastasis in the inflammatory microenvironment is still unclear.

In the simulated inflammatory microenvironment, we found that OP-B treatment remarkably suppressed the invasion of A549 cells, and significantly reversed the changes in the expression of EMT markers in A549 cells, especially the expression of N-cadherin. In addition, OP-B treatment significantly decreased the levels of Stat3, the key master regulator that control cancer proliferation and invasion (Figure 1A). The results suggested that OP-B suppressed the invasion of human lung adenocarcinoma cells in the inflammatory microenvironment. However, the underlying mechanism warrants further elucidation.

Recently, a large number of lncRNAs have been reported to be implicated in regulating NSCLC proliferation, migration and invasion. Clinical data analysis showed that linc00668 was highly expressed in solid tumor, and correlated with the malignancy of tumor patients. While, whether linc00668 affects invasion and whether OP-B inhibits migration through acting on linc00668 warrants further investigation.

Analysis of the transcriptome date showed that linc00668 was significantly downregulated by OP-B in A549 cells, which was validated by qRT-PCR (Figure 2A and B). Furthermore, investigation found that the level of linc00668 increased significantly in THP-1 and A549 co-cultured system compared with that in A549 cells, while OP-B treatment suppressed the expression of linc00668 in the co-cultured system (Figure 2E). Meanwhile results of western blot showed that overexpression of linc00668 induced the reduction of E-cadherin, while promoted the level of N-cadherin (Figure 2C-D).

Bioinformatics prediction showed that linc00668 could potentially bind to miR-432-5p. That was validated by double luciferase reporter gene experiment (Figure 3A-B). Results of qRT-PCR showed that OP-B treatment increased the level of miR-432-5p in A549 cells (Figure 3C). Further experiments by qRT-PCR and western blot showed that overexpression of miR-432-5p resulted in inhibition of EMT signaling pathway (Figure 3D-E).

Taken together, Ophiopogonin-B inhibits metastasis in lung adenocarcinoma A549 cells via the Linc00668/miR-432-5p/EMT axis (Figure 4).

The present study was supported by the National Natural Science Foundation of China (No. 81503374), the Priority Academic Program Development of Jiangsu Higher Education Institutions (PAPD), the Research Foundation of Education Bureau of Jiangsu Province (No. 16KJA360001). China and Europe taking care of healthcare solutions (No. PIRSES-GA-2013-612589). Postgraduate Research & Practice Innovation Program of Jiangsu Province (No. KYCX18_1566).