Gastric cancer (GC) remains the fifth most common cancer and the third leading cause of cancer death worldwide [1-2]. Although great progress has been made in early screening and detection, only about 25% of all subjects with GC are presented with resectable disease. The majority of the patients are diagnosed with locally advanced or metastatic GC needing systemic palliative chemotherapy [3-4]. Accordingly, a platinum-based two- or three-drug combination regimen has been identified as one of the standard first-line options for patients with advanced GC, with an approximately objective response rate (ORR) of 20 to 30%, and median overall survival (OS) of 6 to 10 months [4-7].

Cisplatin is the first platinum compound to be discovered and shows strong anti-tumour activity in various malignancies. However, its application in clinical practice is extremely limited due to its severe nephrotoxicity, high-frequency of vomiting, obvious peripheral neuropathy, as well as the requirement of intravenous hydration, especially for old patients [6-7]. Oxaliplatin, a third-generation platinum with a 1,2-diaminocyclohexane (DACH) carrier ligand, has been confirmed to have comparable efficacy and less nephrotoxicity and gastrointestinal toxicity compared to cisplatin [8-9]. Thus, it is now widely used in patients with colorectal cancer, GC, and relapsed or refractory lymphoma [10].

EMBASE, PUBMED, Cochrane Central Register of Controlled Trials (CENTRAL), MEDLINE, as well as American Society of Clinical Oncology (ASCO) and European Society of Medical Oncology (ESMO) (up to June 2018) were systematically searched using the following combination terms: (“platinum” or “cisplatin” or “oxaliplatin”), (“gastric” or “stomach” or “gastro-oesophageal” or “oesophago-gastric”), (“cancer” or “carcinoma” or “tumor” or malignancy” or “neoplasia”), (“metastatic” or “locally advanced” or “unresectable” or “recurrent” or “stage IV”), and (“clinical trial” or “prospective trials” or “randomized controlled trial”). The search was limited to English language, and relevant references in the primary publications were also checked to find additional studies. All studies were selected and systemically reviewed in accordance with the Preferred Reporting Items for Systematic Reviews and Meta-Analyses (PRISMA) statement.

The publications and data were reviewed and extracted by two independent investigators (Z.Y.Y. and Z.F.). The relevant information of each study including: (1) article or publication information, such as first author's name, year of publication, etc.; (2) patient characteristics, such as diagnosis, age, gender, etc.; (3) study designation information, such as phase, total study population, subjects enrolled per arm; (4) information about treatment, such as treatment strategy, dose and cycle used; (5) response and toxicity profile and so on were carefully extracted, and they were recorded and entered into an electronic database.

And any discrepancy was resolved by discussion and consensus with a third reviewer (J.Z.Y.). Response was determined in accordance with Response Evaluation Criteria in Solid Tumors (RECIST, version 1.1) by the investigators. While adverse events were assessed and recorded according to the National Cancer Institute's Common Toxicity Criteria for Adverse Events (NCI-CTCAE) (version 3.0 or 4.0), which has been widely used in cancer clinical trials. The primary endpoints were complete remission rate (CRR), partial remission rate (PRR), ORR, and disease control rate (DCR). The second endpoint was the toxicity response.

Review Manager (RevMan) Version 5.3 (Copenhagen: The Nordic Cochrane Centre, The Cochrane Collaboration, 2014) software was applied to conduct the statistical analyses of the odds ratios (ORs) for CRR, PRR, ORR and DCR, as well as treatment-related adverse events. Heterogeneity between selected studies was determined by the χ2-based Q statistic, and it was considered with statistical significance when Pheterogeneity < 0.05 or I2 > 50%. When heterogeneity existed, data was analyzed with a random-effects model; otherwise, a fixed-effects model was performed. OR > 1 indicated more deaths or progressions with the cisplatin-based regimen, and OR > 1 indicated more toxicities and ORR with the cisplatin-based regimen. A two-sided p value < 0.05 was considered statistically significant. All confidence intervals (CIs) had a two-sided probability and coverage of 95%. A funnel plot was used to assess potential publication bias.

A total of 2,140 patients from six phase II or III RCTs met the inclusion criteria and were selected in the final analysis (Figure 1). The evaluation of references in the primary publications did not yield any additional studies for analysis. Review articles, non-RCTs, irrelevant topics, non-comparative studies, phase I studies and case reports were excluded. 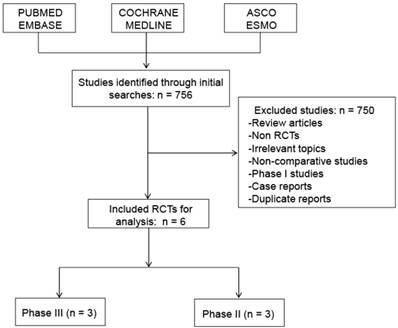 756 initial publications were obtained through a systematic database search. Six RCTs with 2140 subjects diagnosed with advanced GC were included in the present analysis. The characteristics of the selected studies are listed in Table 1. All of the enrolled patients received a cisplatin-based or oxaliplatin-based regimen as first-line treatment. And all six studies were reported in full text and had sufficient data for data extraction.

Meta-analysis of CRR and PRR

Meta-analysis of ORR and DCR

The potential publication bias was determined by performing a funnel plot analysis, and there was no evidence of obvious asymmetry or publication bias among the included studies (Figure 4). 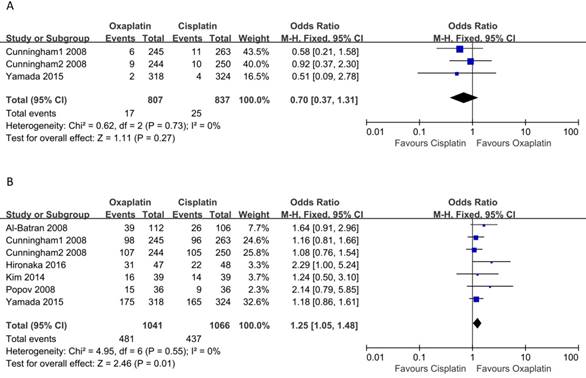 Meta-analysis of objective response rate (A) and disease control rate (B). 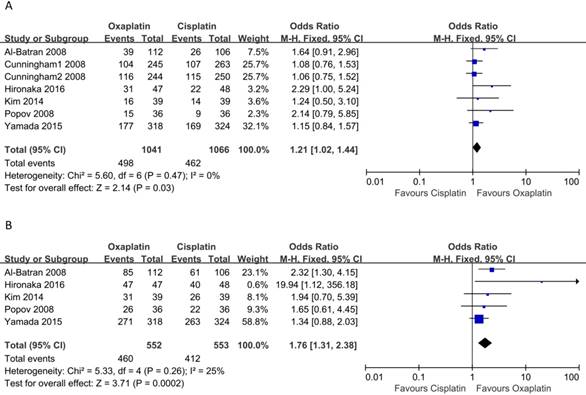 Characteristics of the included studies.

Accordingly, first-line systematic chemotherapy with platinum, fluorouracil and/or taxane could significantly improve the efficacy in patients with advanced GC, leading to an approximately ORR of 20 to 30% and median OS of 6 to 10 months [3-7]. Moreover, a recent meta-analysis demonstrated that the platinum-based treatment was associated with more favorable therapeutic effect compared to non-platinum-containing therapy in such cases [19]. Therefore, oxaliplatin and cisplatin have become the most commonly used agents in the care of advanced GC. On one hand, Lu et al. suggested that the addition of oxaliplatin to S1 could significantly prolong the median PFS (6.5 versus 4.0 months, p = 0.02), OS (14.0 versus 11.0 months, p = 0.03) and increase 1-year survival rate (63.8% versus 48.9%) compared to S1 monotherapy [20]. On the other hand, in combination with S1, cisplatin remarkably increased the median OS (13.0 versus 11.0 months, p = 0.04) and PFS (6.0 versus 4.0 months, p < 0.0001) than S1 alone in a Japanese study [21].

Funnel plot of publication bias in the meta-analysis. 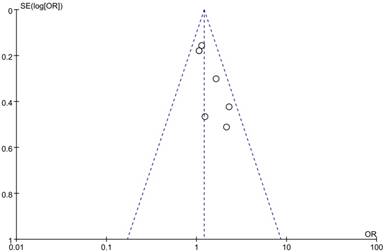 As for the adverse events, similar to the results reported by Huang J et al., oxaliplatin-based regimen therapy significantly decreased the risk of all grades of neutropenia, anemia, febrile neutropenia, nausea, stomatitis, creatinine elevation and thromboembolism, as well as leukopenia, neutropenia, anemia and febrile neutropenia at grades of 3-4 compared to cisplatin-based regimen. Unfortunately, oxaliplatin- based therapy markedly increased the risk of all grades of thrombocytopenia, diarrhea, sensory neuropathy, total bilirubin, aspartate aminotransferase and alanine aminotransferase elevations, and grades 3-4 of diarrhea, fatigue and sensory neuropathy [17]. The results were in accordance with previous studies [17-18].

However, it was noteworthy that several limitations should be taken into consideration when interpreting the results of this meta-analysis. The main limitation was the lack of adequate random sequence generation and blinding procedure of the RCTs, which might increase the risk of bias of this pooled-analysis. In addition, the present meta- analysis was based on published results, but not individual patient data. Finally, although no efforts were spared to search the literature comprehensively, there still existed the possibility that few relevant publications were not identified.

In summary, oxaliplatin-based regimen was significantly superior to cisplatin-based regimen in terms of PRR, ORR and DCR as first-line chemotherapy for advanced GC, and it could reduce the occurrence of most adverse events, but with an increased risk of thrombocytopenia, sensory neuropathy, diarrhea, fatigue and liver dysfunction. Thus, on the one hand, for patients with bulky disease that may lead to the obstruction of digestive tract, the primary tumor should be shrunk as soon as possible to alleviate the related symptoms, the oxaliplatin- based chemotherapy regimen is preferred. On the other hand, the cisplatin-based therapy is preferred for patients with renal insufficiency or abnormal liver function, in order to prolong survival time and improve the quality of life for advanced GC.

This study was supported by grants from Anhui Natural Science Foundation (NO. 1808085MH306).