Patients with metastatic rectal cancer who underwent the resection of primary site and received preoperative and postoperative radiotherapy were identified in the SEER database (2004-2014). This study was approved by the Institutional Review Board of Fudan University Shanghai Cancer Center. The inclusion criteria were listed as follows: The site code represented “rectum (130)”; patients with distant metastases (M1); surgery was performed in primary site; patients with a known treatment sequence consisting of ''radiation before surgery'' (preoperative radiotherapy), ''radiation after surgery'' (postoperative radiotherapy); CRC was the only type of primary cancer; information about cancer-specific survival (CSS) and survival months were available.

The differences between two groups were calculated by using χ2 test. The Kaplan-Meier method was used to analyze CSS and relative 5-year survival rate was calculated. The difference was compared using the log-rank test. Multivariate analyses were performed to recognize the specific factors which influence CSS. All statistical analyses were performed with SPSS 25.0 and R (version 3.4.4).

Flow diagram of the PSM process 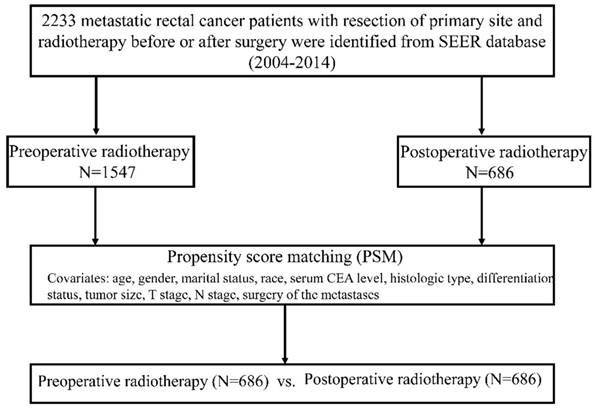 Survival benefits of radiotherapy in metastatic rectal cancer have been shown in several retrospective studies [8, 9]. However, another study found that postoperative pelvic radiotherapy did not improve recurrence-free survival of metastatic rectal patients after resection of primary tumor [10]. Indeed, stage IV rectal cancers comprise a heterogeneous group, which impedes the progress of prospective studies. Several studies with small sample size compared of local recurrence rate and overall survival of stage IV rectal cancer patients with or without neoadjuvant chemoradiotherapy and the results are inconsistent [11-14]. In the present study, we demonstrated that patients with resectable rectal cancer received radiotherapy before definitive primary resection surgery had better prognosis than radiotherapy after surgery using a relative large-population bases database. 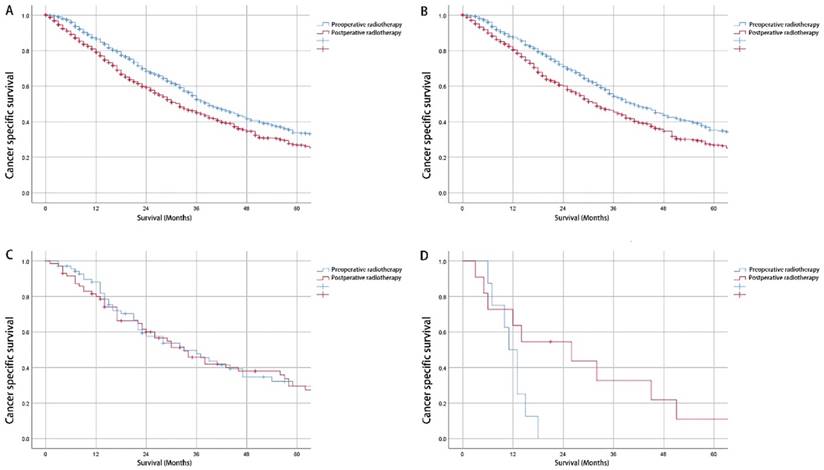 Univariate and multivariate analysis for cancer-specific survival in metastatic rectal cancer with resection of primary site.

It is well documented that distant disease may have a decisive role in prognosis. The resection of distant lesion has been added in our PSM model to reduce the selection bias. Our present study also demonstrated that metastatectomy were significant prognostic factors for CSS in metastatic rectal cancer. In stage IV colorectal cancer, the value of surgery has been well established [15, 16]. Lin et al [17] reported that concurrent chemoradiotherapy followed by resection of metastases converts to survival benefit in metastatic rectal cancer. These results indicated that neoadjuvant chemoradiotherapy and metastatectomy should be taken into consideration for curative intent.

However, there are several inevitable limitations in our present study. The main deficiency is that the data of systemic chemotherapy is unavailable. Although chemotherapy has a critical effect on prognosis of metastatic rectal cancer patients, the chemotherapy regiments and course of treatment are missing in SEER database. Similarly, neither of BMI nor inflammation index which may affect the prognosis are available. Further, despite we employed the propensity score to minimize selection bias, some unknown confounders remain unnoticeable due to its retrospective nature. Moreover, because preoperative radiotherapy may result in tumor down-sizing and down-staging, inclusion of tumor size, T stage and N stage in the PSM model underestimated treatment effect in the preoperative radiotherapy group. A higher percentage of patients with elevated serum CEA level in preoperative radiotherapy group enhanced this effect further.

8. Tong D, Liu F, Li W, Zhang W. The impacts of surgery of the primary cancer and radiotherapy on the survival of patients with metastatic rectal cancer. Oncotarget. 2017;8:89214-27