O Blood Type Is Associated with Unfavorable Distant-metastasis-free Survival in Female Patients with Nasopharyngeal Carcinoma: A Retrospective Study of 2439 Patients from Epidemic Area

Purpose: To identify the association between ABO blood type and the survivals in nasopharyngeal carcinoma patients.

Nasopharyngeal carcinoma (NPC), arises from the nasopharyngeal epithelium [1]. In 2012, there were 86,500 cases reported worldwide, in which 71% of all new cases in east and Southeast Asia, with China contributing 53.5% of these cases [2, 3]. Several factors have been proved to enhance the risk of NPC, smoking, alcohol consumption, and family history of cancer and so on [4-6].

The ABO gene, located on chromosome 9q34.1 to 9q34.2, encodes a specific glycosyl transferase that synthesizes A and B agglutinogens to form the ABO blood type agglutinogens [7], expressed by erythrocytes, most epithelial cells, endothelial cells and so on[8]. Relationship between the ABO blood type and prognosis have been reported in many tumor types, such as leukemia [9], pancreatic cancer [10-12], bladder cancer [13], gastric cancer [14-16], renal cell carcinoma [17], breast cancer [18,19], lung cancer [20,21] and so on.

Therefore, we sought to conduct a study to assess the prognostic value of different blood types in NPC patients, to determine whether certain blood type is an independent predictor of prognosis so as to guide the clinical practice.

We reviewed all the 2,626 patients who were newly diagnosed with NPC without distant metastasis between January 2001 and December 2004 at the Sun Yat-sen University Cancer Center (SYSUCC). We collected data on basic characteristics including age, gender, tumor family history, cigarette smoking status at diagnosis, alcohol drinking status at diagnosis, BMI status at diagnosis, whether to receive chemotherapy, chemotherapy cycles and ABO blood type. 187 patients with missing data were excluded from this study. All cases were restaged according to the 7th edition of the UICC/AJCC staging system [28]. Computed tomography and/or magnetic resonance imaging was essential for disease staging before treatment, and all patients were treated by CRT (n=2287), or IMRT (n=152) with or without chemotherapy. For 2D-CRT, high energy 6-8 MV X-ray of linear accelerator was used. The radiation field included the skull base, nasopharynx and neck. Face-neck joint field and lower cervical anterior tangent field were irradiated to a dose of 36 Gy, and then followed by bilateral preauricular fields plus anterior tangent field to a total dose of 60 to 78 Gy. For IMRT, simultaneous integrated boost (SIB) technique was used. All patients were scanned with serial 3-mm slices from the vertex through the clavicles in supine position with a head, neck, and shoulder thermoplastic mask. GTV was defined as the primary nasopharyngeal gross tumor volume and the involved cervical lymph nodes and was prescripted 66-70Gy in 30-32 fractions. CTV1 was defined as the GTVnx plus a margin of 5-10 mm for potential spread and was prescribed 60Gy in 30-32 fractions. CTV2 was defined by adding a margin of 5-10 mm to CTV1 (reduced when adjacent critical organ at risk (OAR)) and included the retropharyngeal lymph nodal regions, clivus, skull base, pterygoid fossae, parapharyngeal space, inferior sphenoid sinus, and posterior edge of the nasal cavity and maxillary sinuses, and was prescripted 54Gy in 30-32 fractions. For N0 patients, lower neck was not irradiated. While for N positive patients, the whole neck was delineated in CTV2. Chemotherapy included induction chemotherapy (IC), concomitant chemotherapy (CC), and adjuvant chemotherapy (AC). Chemotherapy regimen was mainly based on platinum.

The flowchart of study design was shown in Figure 1. We first analyzed the endpoints including overall survival (OS), disease-specific survival (DSS), locoregional relapse-free survival (LRFS) and distant metastasis-free survival (DMFS) among all the 4 ABO blood types pairwise over strata in the whole 2439 patients to select certain blood type with prognostic value. Then, we further compared certain blood type patients with others in the whole 2439 patients, 559 female patients and 1880 male patients respectively. 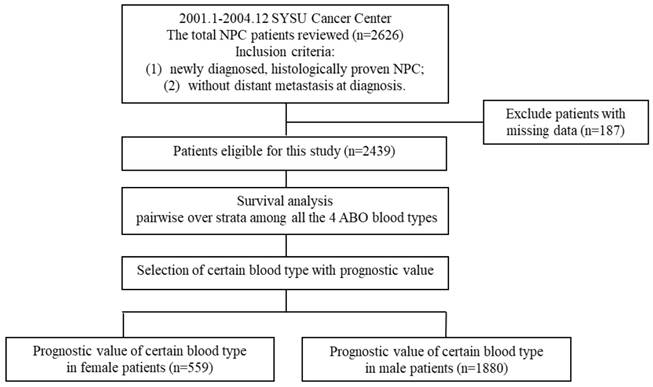 Distant metastasis-free survival curves for patients with blood type O and non-O blood types. (A) In total patients, (B) in female patients and (C) in male patients.

Pairwise comparisons of all endpoints among ABO blood types in total patients.

Univariate and multivariate analyses between patients with O and non-O blood type.

In subgroup analysis by Ouyang et al [26], the increased risks of OS and DMFS associated with A blood type were only observed in male patients, which was attributed to unbalanced gender distribution between the patients with blood type A and non-A blood types. However, the results of our subgroup analysis showed A blood type patients had similar prognosis with others, whether in male patients or not (Figure 6; Figure 7). It should be pointed out that patients in our study made up a consecutive cohort, which included several pathological types, radiotherapy techniques and other features, so as to decrease some bias compared with selected cohort studied in other studies. So these results may help to further confirm that A blood type may have no prognostic value in NPC. Peng et al [24] showed that ABO blood type was not an independent prognostic factor for DFS, OS, DMFS or LRFS after adjusting for plasma Epstein-Barr virus deoxyribonucleic acid (EBV-DNA). There might be some prognostic value in ABO blood type but offset by adjusting for plasma EBV-DNA. Moreover, it used the four-year survival endpoints to analyze, might get the misleading conclusion resulting from insufficient follow-up time.

Survival curves for patients with blood type A, B, AB and O in the total 2439 patients. (A) Overall survival, (B) disease-specific survival (C) locoregional relapse-free survival and (D) distant metastasis-free survival. 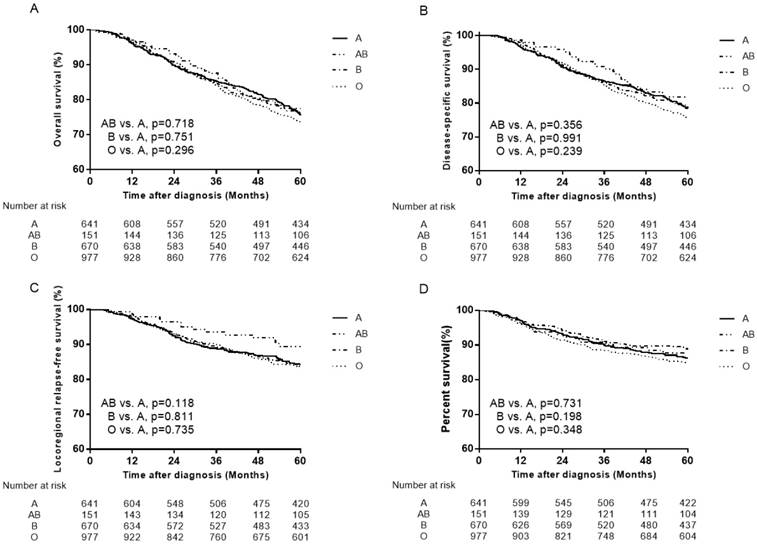 Survival curves for patients with blood type A and non-A in the total 2439 patients. (A) Overall survival, (B) disease-specific survival, (C) locoregional relapse-free survival and (D) distant metastasis-free survival. 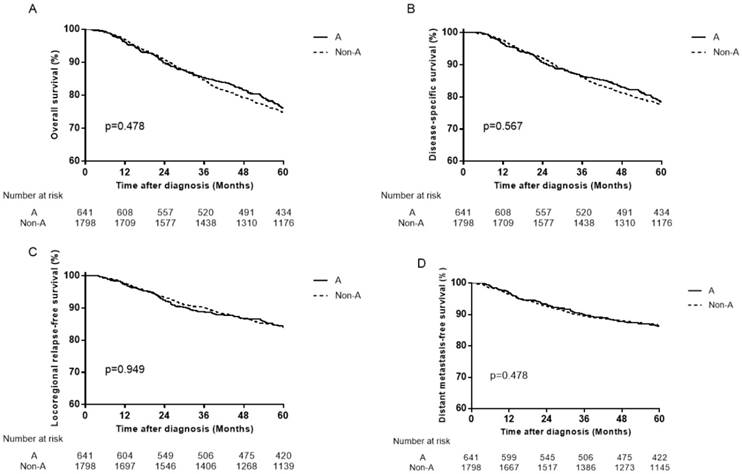 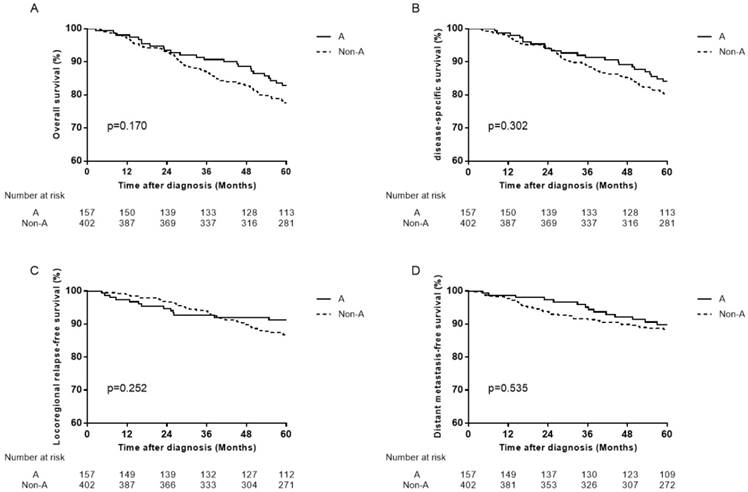 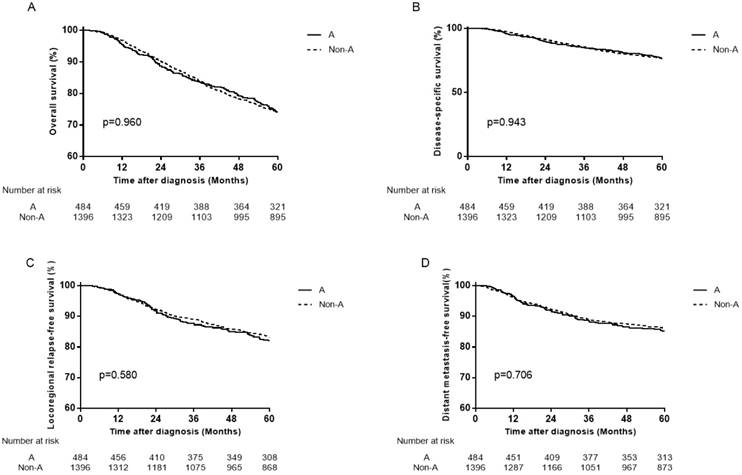 The mechanism of how ABO blood type might influence NPC progression remains relatively elusive. Underlying molecular and pathogenic differences play important roles in the effect of ABO blood types on survival. Firstly, ABO gene is located on chromosome 9q34, which is a common region of loss in NPC [30]. Secondly, a study in women showed an association between ABO blood group status and the serum levels of soluble intercellular adhesion molecule-1 (sICAM-1) [31]. The sICAM-1 concentration was higher in women with O blood type, particularly higher than those with A blood type. In addition, the higher serum sICAM-1 concentration was related to the worse survival in NPC [32]. Neoplastic transformation and evolution to metastatic disease are characterized by a dramatic aberration in cellular cohesive interaction. The adhesion molecules were shown to facilitate tumor cell mobility, adhesion of tumor cells to endothelium, neovascularization at the metastatic sites, and host inflammatory response to cancer [33,34]. Intercellular adhesion molecule 1 (ICAM-1) is an inducible cell-surface adhesion molecule, and the ICAM-1/ lymphocyte function associated antigen-1 (LFA-1) pathway plays a major role in a variety of cell-mediated immune responses. It has been reported that ICAM-1 on the surface of cancer cells or antigen-presenting cells (i.e. macrophages) is a costimulatory factor that stabilizes T-cell receptor-mediated binding between these cells and T lymphocytes [35]. Soluble ICAM-1 would work as an immunosuppressive agent by blocking LFA-1 on T lymphocytes, thus rendering it less available for binding with cell-surface ICAM-1 on cancer cells [36]. In this manner, the shedding of sICAM-1 may enhance the metastatic process by escaping host immune surveillance. This process therefore represents an additional potential mechanism for high levels of sICAM-1 in patients with NPC that has metastasized via hematogenous and lymphatic routes. So the higher concentration of sICAM-1 in O blood type patients, may partially explain the poorer survival of O blood type NPC patients. Thirdly, the expression change of serum tumour necrosis factor-alpha (sTNF-α) level is closely related to tumour progression and prognosis in many cancers including NPC [36-38]. Individuals of blood group O had higher sTNF-α levels than others [39]. While, high expression levels of sTNF-α could predict bone invasion, post-treatment distant metastasis and poor overall survival in NPC patients [40]. Further basic researches about NPC genetic, biological differences associated with the ABO blood types are required. Therefore, our next research direction will be for these underlying mechanisms for further exploration and validation.

The limitations of our study are related to its retrospective nature. We were unable to collect adequate information regarding the patients' pretreatment plasma EBV-DNA copy number, which has been demonstrated to strongly predict survival [28]. We excluded patients with missing data, such as with unknown ABO blood type. Finally, 233/2439 (11.9%) patients for the entire population, 124/977 (12.7%) and 166/1462 (11.4%) patients with O and non-O blood type were lost to follow up, respectively.

This work was supported by the Hi-Tech Research and Development Program of China (Grant number 2006AA02Z4B4), the National Natural Science Foundation of China (No. 31170805) and the National Key R & D Program of Precise Medical Research of China (NO. 2016YFC0904600). The funders had no role in study design, data collection and analysis, decision to publish, or preparation of the manuscript.