Materials and Methods: Patients who were diagnosed only with intrathoracic metastasis between March 2011 and October 2016 and had EGFR-mutations were selected for this study. Prognosis was determined based on metastatic patterns by univariate and multivariate analysis.

Conclusion: The prognosis of EGFR-mutant lung adenocarcinoma patients diagnosed only with intrathoracic metastasis was different, indicating that M1a staging should be refined.

Lung cancer is one of the most common malignant tumors that seriously endanger human health [1]. Based on the data published in 2015 by CA-A Cancer Journal for Clinicians, there are 1.82 million new cases of lung cancer worldwide each year. Nearly 1.59 million patients died from lung cancer every year, of which 0.49 million were women and 1.1 million were men [2]. Non-small cell lung cancer (NSCLC) accounts for more than 80% of all pathological types of lung cancer. For early NSCLC, surgery is the best treatment option. However, the vast majority of lung cancer patients are usually in advanced stage when diagnosed and lose the chance for surgery [3, 4].

The Institutional Review Board of Shanghai Chest Hospital approved this study. Informed consent for the study was obtained from all patients. All patients were diagnosed with lung adenocarcinoma had intrathoracic metastasis in our hospital between March 2011 and October 2016. In addition, all patients included in our study were with M1a metastasis when initially diagnosed. Patients diagnosed with intrathoracic metastases were divided into three groups: Group A (pleural metastasis only), Group B (contralateral lung metastasis only) and Group C (had both pleural and contralateral lung metastasis with or without pericardial effusion). NSCLC staging was performed according to the 8th TNM classification. The inclusion criteria were as follows: (1) Advanced lung adenocarcinoma with intrathoracic metastasis only. (2) All patients included were diagnosed histopathologically or cytologically. (3) With EGFR mutation and treated with EGFR-tyrosine kinase inhibitors (EGFR-TKIs: erlotinib, gefitinib or icotinb). (4) A systematic examination was performed before treatment. The clinical characteristics included sex, age at diagnosis, smoking status, EGFR mutation type, local consolidative therapy history (LCT, including surgery or radiotherapy for local metastatic lesions, such as bone, brain or other sites metastatic sites, which occurred after disease progression), performance status, T stage, N stage, brain metastasis, T790M mutation, treatment with Osimertinib.

First generation EGFR-TKI included gefitinib (250mg/times; one time/day), erlotinib (150mg/times; one time/day) and icotinib (125mg/times; three times/day). Chest computed tomography (CT), brain magnetic resonance imaging, bone scanning, abdominal B ultrasonic examination or whole body fluorodeoxyglucose (FDG) tumor imaging or FDG PET-CT were performed for all patients for initial staging evaluation. The nature of pleural fluid was assessed by pleural effusion cytology. Pleural nodules were diagnosed by chest CT, PET-CT, or biopsy of the chest wall nodules. OS time was calculated from the date of diagnosis of lung adenocarcinoma with intrathoracic metastases to the date of death or last follow-up visit. Progression-free survival (PFS) of first-line EGFR-TKIs was defined as the date from the initiation of TKIs therapy until the date of progression or last follow-up visit (June 15, 2018).

Clinical information were analyzed using χ2 tests or Fisher's exact tests, where appropriate. OS was calculated by the Kaplan-Meier method, and independent prognostic factors were assessed by Cox proportional hazards regression analysis. A Cox proportional hazard multivariable model was used for overall survival to determine the risk of death in lung adenocarcinoma patients with EGFR-mutations who received EGFR-TKI. Comparisons among the groups were performed using the Log-rank test. The level of significance was set to 0.05. For pair-wise comparisons between the three groups, Bonferroni correction was adopted and the corrected P value was 0.0167 (corrected P=0.05/3≈0.0167). SPSS statistical software version 24 was used for all statistical analyses.

A total of 137 patients were selected and analyzed based on the inclusion criteria. Patients selection was performed as shown in Figure S1. Characteristics of the entire patient cohort and each subgroup category are summarized in Table 1. The χ2 test showed that clinical data such as age, sex, smoking history, EGFR mutation type, and LCT history were balanced among Group A, Group B and Group C (P>0.05) (Table 1).

* The definition of “smoker” in our study means the patient who has smoked >100 cigarettes during their lifetime. 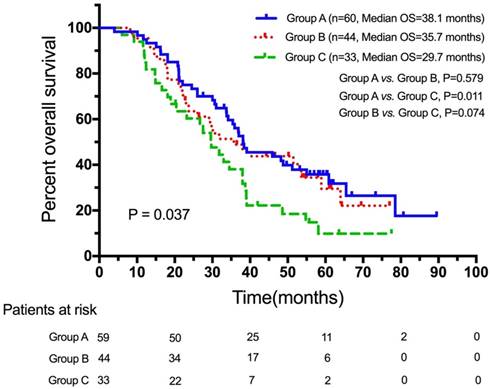 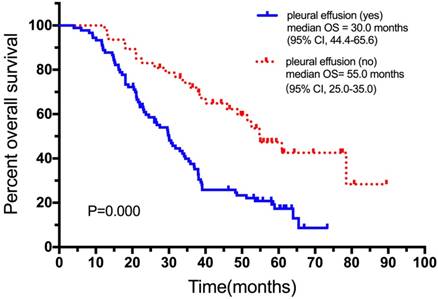 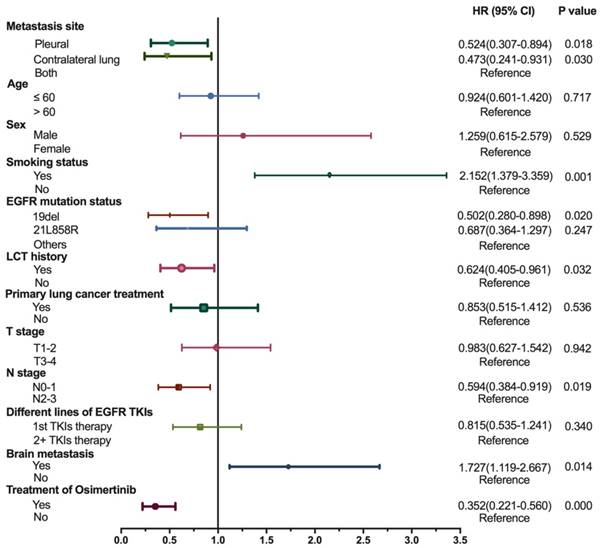 It is largely unknown what the prognostic differences are among patients with multiple metastatic patterns of intrathoracic metastasis lung adenocarcinoma patients with epidermal growth factor receptor (EGFR) mutations. In addition to investing the influence of different intrathoracic metastasis patterns on prognosis, this study also examined the most relevant prognostic factors, such as smoking status, EGFR mutational status, brain metastasis, age, sex, LCT history, primary lung cancer treatment, and different lines of EGFR TKIs. Our study used the Bonferroni correction, a rigorous statistical method which was considered efficient to avoid overestimation and was used to decrease Type 1 error of multiple testing. Using this correction, the positive findings were reduced and the false negative results were increased on multivariate analysis for OS.

Smoking status and N stage are well-known prognostic factors for lung cancer [12, 13]. In addition, LCT history, brain metastasis and treatment with Osimertinib have also been considered as important clinical prognostic factors [14, 15]. This study demonstrated that different metastatic patterns of intrathoracic metastases were also had prognostic value. In addition to being easy to keep track, we believe that these metastatic patterns should be considered in clinical practice. However, subgroup analysis demonstrated that the OS benefit for Group A was significant in patients with N0-1 disease but not in patients with N2-3 stage and T3-4 stage disease. We inferred that the poorer prognosis for N2-3 stage and T3-4 stage patients might have diminished the differences between the metastatic groups. 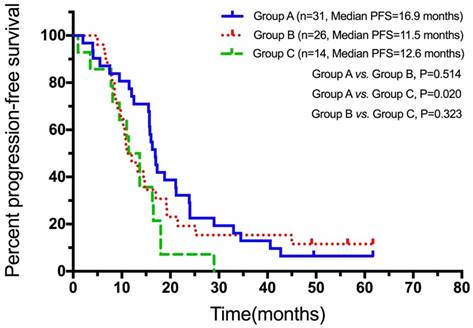 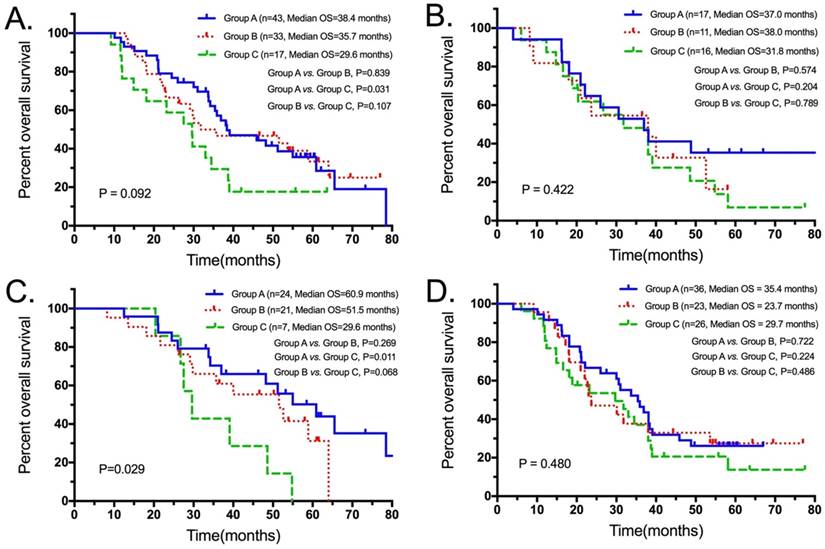 Additionally, subgroup analysis showed that the difference between Group A and Group C were not statistically significant among patients with T1-2 stage disease. This negative result may be caused by Bonferroni correction, which was too rigorous and considered efficient in avoiding overestimation, while it reduced the positive findings. Moreover, the small sample size for each subgroup may have affected the statistical analysis. The OS for the three cohorts in those with exon 21L858R mutation patients were consistent with the entire patient cohort. However, for patients with a deletion in exon 19, the three groups did not show statistical differences for survival. This result may be partly explained by the inherent biological and prognostic differences between EGFR exon 19 deletion patients and 21L858R mutant patients. Based on previous studies, lung adenocarcinoma patients with a deletion in exon 19 showed significantly better efficacy for EGFR-TKIs treatment compared to the patients with an exon 21L858R mutation [16, 17]. Since patients with a deletion in exon 19 had a better therapeutic effect for EGFR-TKIs, this may, to a certain extent, covered up the differences in prognosis for the different metastatic patterns. A recent meta-analysis performed by Wang H et al. showed that NSCLC patients with the exon 19 deletions had higher response rate to tyrosine kinase inhibitors and better overall survival compared to NSCLC patients with 21L858R, suggesting that the improved prognosis for patients in the exon 19del group may reduce the differences between the metastatic groups [18].

The TNM classification system attempts to roughly assess the whole-body tumor burden by categorizing primary tumor size and local involvement, extent of nodal disease, and distant metastases [23, 24]. However, along with disease aggravation, the accuracy of the TNM classification system as a surrogate for overall tumor burden would collapse [24]. For example, a patient with only a single intrathoracic metastatic site would have the same stage as a patient with diffuse intrathoracic metastatic disease. Although neither patients would be suitable for surgery, their prognosis and therapy may not be the same. Moreover, tumor burden varies with different metastatic patterns for intrathoracic metastases. Simultaneous lung and pleural metastasis are associated with a higher tumor burden compared to lung metastasis only or pleural metastasis only [25]. Hence, from the perspective of tumor burden, it is reasonable that the results from our study showed the prognosis of simultaneous lung and pleural metastasis were worse.

Studies have suggested that the increased number of metastatic sites would make tumor cells secreted more microenvironment factors, such as vascular endothelial growth factor, which would accelerate tumor progression [14, 26, 27]. This study showed that patients with simultaneous metastasis of lung and pleura had a worse prognosis, and inferred to be associated with the biological characteristics of tumor cells. Furthermore, we inferred that different patterns of metastases of intrathoracic metastatic patterns may be related to the biological characteristics of tumor cells, such as invasiveness and transitivity.

The major limitation of this study is its retrospective nature. Secondly, the sample size was small for each group. In addition, malignant effusion and pleural metastases are immeasurable lesions, while malignant pericardial effusion is also a type of intrathoracic metastasis. However, the number of such patients was too few to be included in this analysis.

In conclusion, the prognosis for different metastatic patterns of intrathoracic metastasis is distinct in EGFR-mutant lung adenocarcinoma patients, indicating that M1a should be refined.

This study was supported by the National Natural Science Foundation of China (No.81502450) and Science and Technology Commission of Shanghai Municipality, China (No.18441904700). The funding agencies played no role in the design or conduct of this research.

Investigations involving human patients in this study were performed in accordance with the principles of the Declaration of Helsinki and with the ethical standards of the institutional and/or national research committee.

Informed consent was obtained from all study participants.

10. Eberhardt WE, Mitchell A, Crowley J. et al. The IASLC Lung Cancer Staging Project: Proposals for the Revision of the M Descriptors in the Forthcoming Eighth Edition of the TNM Classification of Lung Cancer. J Thorac Oncol. 2015;10:1515-22