This study aims to investigate the molecular characteristics of Chinese gastric cancer patients. In our study, the KRAS, BRAF, and PIK3CA mutation status of 485 GC patients were analyzed by Sanger sequencing. Kaplan-Meier analysis was used to plot survival curves according to different genotypes. The results show that the frequency of KRAS, BRAF and PIK3CA mutations were 4.1%, 1.2% and 3.5%, respectively. BRAF mutations were significantly concentrated in stage III and IV gastric cancer (P=0.009). KRAS G12V mutation carriers have much shorter OS than other mutation carriers and wild-type group patients (P=0.013). In conclusion, only the KRAS G12V mutation has an adverse effect on patient survival.

Gastric cancer (GC) is the fifth most common malignancy and the third leading cause of cancer-related death in the world (http://globocan.iarc.fr/Default.aspx) [1]. In China, the incidence of GC is much higher than in any other countries and it is the third most common cancer and the leading cause of death [2]. The geographical differences may partly reflect differences in population-specific genetic risk factors and the prevalence of Helicobacter pylori infection, which plays critical roles in GC pathogenesis [3, 4]. Surgery is the primary treatment for patients with early-stage GC. However, GC is often diagnosed at an advanced stage [5]. In most of the world, GC continues to pose a significant challenge for health care professionals.

In the present, management and prognosis of patients with GC are based entirely on the TNM staging system. However, TNM staging information is not enough for individual treatment and potential targeted therapy. Increased understanding of oncogenic mutations and cell signaling pathways led to the successful application of targeted therapies in various cancers.

The RAS/RAF/MEK and phosphoinositide 3-kinase (PI3K)/Akt/mTOR signaling pathway are key signals that are activated in the different tumors. These pathways are involved in the diverse cellular process, including cell growth, survival and motility [6-8]. Mutations in KRAS, BRAF and PIK3CA in the above pathways have been detected in various malignancies. Identification of these mutations in tumor has predictive value or prognostic value for clinical application. In colorectal cancer, anti-EGFR drugs should only be provided to patients with wild-type KRAS [9]. BRAF mutation has an adverse prognosis in patients with metastatic colorectal cancer [10, 11]. In melanoma with BRAF mutation, vemurafenib therapy improves rates of overall and progression-free survival of melanoma patients [12]. Mutated PIK3CA in colorectal cancer patients indicated low dose aspirin use improves patient's survival [13, 14]. Several studies have partially analyzed KRAS, BRAF and PIK3CA mutation in GC patients [15-18], but the clinical implications of these mutations in GC patients are not addressed. Further investigation for these genetic alterations in GC is required.

In the present study, we analyzed the molecular characteristics of GC in Chinese patients. We accessed the status of KRAS, BRAF and PIK3CA mutations by using Sanger sequencing, and investigated the clinicopathological characteristics and prognostic role of gene mutations in GC patients.

The study retrospectively analyzed 485 GC patients who underwent surgical resection at the Sixth Affiliated Hospital of Sun Yat-sen University from December 2009 to May 2016. All patients underwent informed a consent process approved by the Institutional Review Board of the hospital. The criteria for patient inclusion were: (1) Aged 18-80 years; (2) Primary lesion was pathologically diagnosed as gastric carcinoma; (3) Clinical information, including follow-up data, was completed. The criteria for exclusion were: (1) With a history of other tumors or hematological malignancy; (2) Accompanied with severe infection, severe kidney dysfunction, or severe hepatic dysfunction; (3) Accepted preoperational chemotherapy, radiotherapy, targeted therapy, and immunotherapy. Formalin-fixed, paraffin-embedded tumor tissues were obtained. Clinical data was collected. The study protocol was approved by the Institute Research Medical Ethics Committee of Sun Yat-sen University. Overall survival (OS) was defined as the time from the beginning of surgical resection to death or last follow-up.

Assessment of KRAS, BRAF and PIK3CA mutation was performed in the Molecular Diagnostic Laboratory of the Sixth Affiliated Hospital of Sun Yat-sen University, using an adequate quality-control procedure. All tissue samples were formalin-fixed paraffin-embedded and histologically confirmed. Genomic DNA from analyzed samples was extracted with Hipure FFPE DNA Kit (Cat No: D3126-02, Magen, China) according to the manufacturer's protocol. Exon 2 (codon 12 and 13) of KRAS, exon 9 (codon 542 and 545) and exon 20 (codon 1047) of PIK3CA, and exon 15 (codon 600) of BRAF were assessed.

The prior PCR amplification was performed on an ABI 9700 PCR system. Amplification was done in 20μL reaction contain 50-100ng of DNA template and 500nM primers, with the following program: 5min at 98°C for initial denaturation followed by 45cyclers of 25sec at 95°C, 25 sec at 58°C and 25 sec at 72°C, and a final extension at 72°C for 10 min. The primers were listed in Table 1. PCR products were purified, sequenced by using BigDye Terminator v3.1 Sequencing Standard Kit (Thermo Fisher Scientific, USA) with an ABI Prism 3500Dx genetic Analyzer (Applied Biosystems, Foster City, CA).

Primers and conditions of Sanger sequencing.

Table 2 summarizes the clinicopathological characteristics of study subjects. Of these 485 patients, males were over twice females (68.0% vs. 32.0%). A majority of patients (79.1%) were older than 50 at diagnosis. Most patients (65.2%) had stage III or stage IV tumor. Nearly half of the tumors (41.4%) were located in the lower gastric.

KRAS, BRAF and PIK3CA mutations, and their correlations with patient characteristics

Associations between gene mutations and clinicpathological characteristics of patients.

Associations between different mutations of KRAS and clinicpathological characteristics of patients.

KRAS is a downstream effector of EGFR. Activating mutation of KRAS is thought to stimulate the RAS/RAF/MEK/signaling pathway independent of EGFR activation. We found the overall KRAS mutation rate was 4.1%, which were close to most of the previous studies in China and Japan (4% - 4.9% in Japan and 4.5% in China) [15, 16, 18]. In patients and animal models, the malign function of KRAS G12V mutation has been identified in other tumors, such as colorectal cancer, lung cancer, and pancreatic cancer by multiple techniques [16, 19-25]. As to gastric cancer, we found KRAS G12V is a poor prognostic marker, which has not been reported before. Moreover, our cohort is the biggest one in the related reports [15, 26], which can more effectively reflect the southern China GC patients' molecular profile. Also, we found tumor locations were not associated with the overall survival of GC patients or with mutations of KRAS, BRAF, and PIK3CA. KRAS is a key biomarker for predicting response to anti-EGFR therapy in colorectal cancer[11, 27] .Some phase III trials on addition of cetuximab or panitumumab to system chemotherapy reported that in advanced GC or oesophagogastric cancer, the anti-EGFR antibodies provided no additional benefit[28, 29]. Thus, more evidence is needed to elucidate KRAS mutations' predictive value to GC.

BRAF is a downstream effector of KRAS, its prognostic value for colorectal cancer is wildly accepted [10, 11]. In GC, the frequency of BRAF mutation is very low. Large-scale trials are needed to test its clinical value in GC.

PIK3CA, encodes the p110 catalytic submit of PI3K, frequently mutated in some human tumors [30]. Exon 9 and exon 20 are two PIK3CA mutational hotspots that affected the helical and catalytic protein domains, respectively. The PI3K/AKT/mTOR pathway has a close association with the RAS/RAF/MEK/signaling pathway, that active RAS can interactive catalytic submit of PI3K and lead its activation in the regulation of cellular functions [31]. 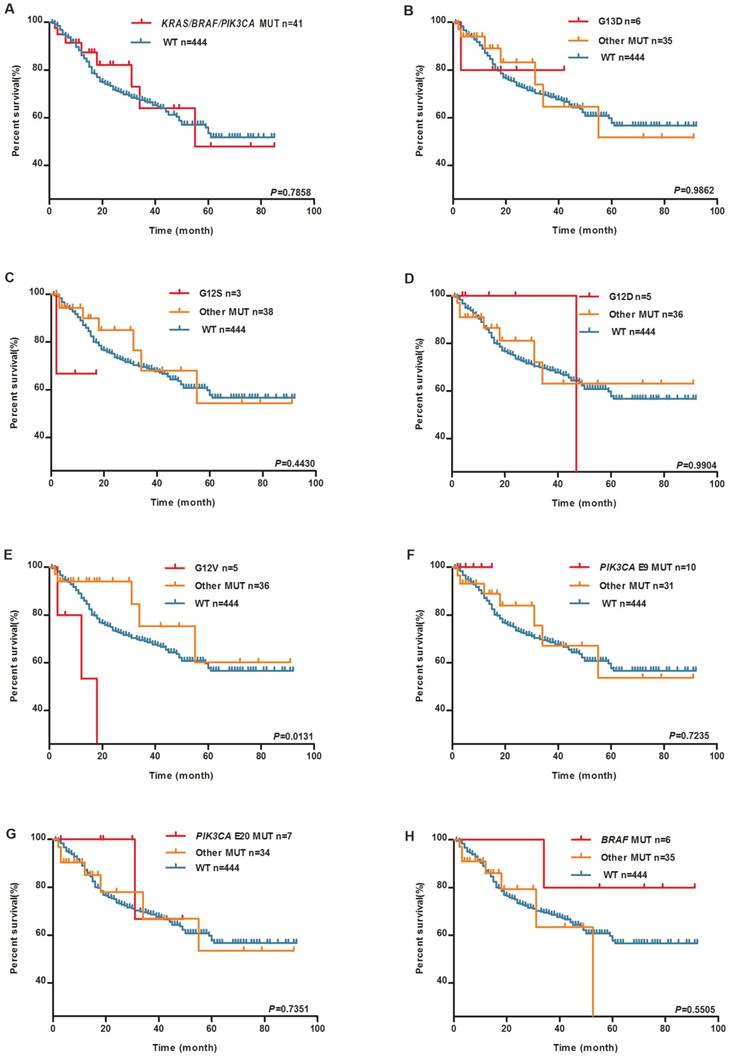 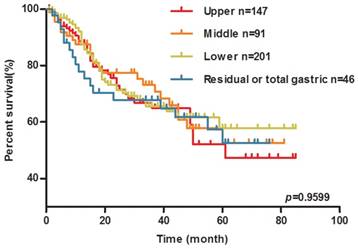 To validate our main conclusion, we analyzed clinical and somatic mutations data of the TCGA database on LinkedOmics website (http://www.linkedomics.org). However, the result showed that there is no significant association between KRAS G12V mutation and patients' survival (P=0.87, Supplementary Figure 1) [39]. The deviation between our cohort and TCGA cohort may be due to the small sample of KRAS G12V mutated patients in the database and the genetic background difference between Asian people and western people. Further validation will be carried out in our center. 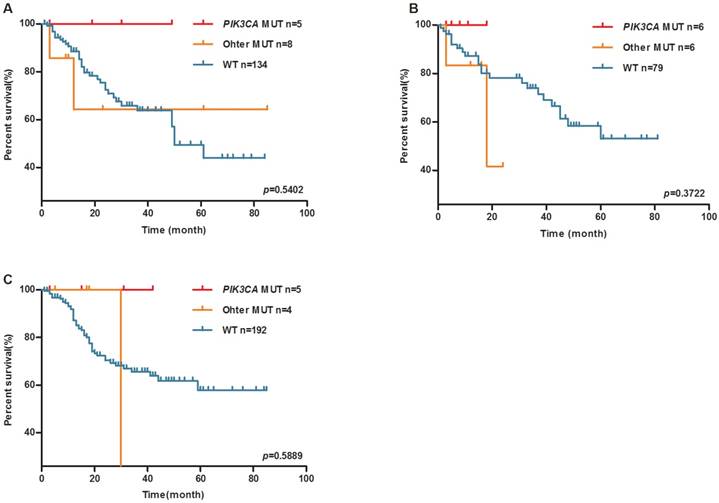 There are several limitations to the studies. First, the small sample size was the major limitation. We could not adequately evaluate the prognostic impact of each gene mutation on GC patients with this small cohort. Second, the study population was collected from a single center. The genetic variations we observed may mainly reflect the signatures of southern China. Insufficient event outcome was the third limitation. More significant finding needs longer follow-up time in the future.

Overall, we found the frequency of KRAS, BRAF and PIK3CA mutations in GC patients were 4.1%, 1.2%, and 3.5%, respectively. Meanwhile, we found KRAS G12V is an adverse prognostic factor for gastric cancer patients.

Ethical approval: All procedures performed in studies involving human participants were in accordance with the ethical standards of the institutional and/or national research committee and with the 1964 Helsinki declaration and its later amendments or comparable ethical standards.