Background: The predictive roles of secreted protein acidic and rich in cysteine (SPARC) in pancreatic ductal adenocarcinoma (PDAC) patients after curative resection have not been clarified. We investigated the correlations between the SPARC expression and the postoperative prognosis.

Methods: We retrospectively analyzed the clinical data from consecutive patients who underwent curative resection for pancreatic cancer in our institution from 2005 to 2014. Stromal SPARC expression was analyzed by immunohistochemistry on tumor tissue microarrays (TMAs) from the patients.

Results: A total of 179 patients were enrolled to this study. The median follow-up period of the present study was 62.1 months. Seventy patients had positive SPARC expression (39.1%). There were no significant differences between the positive SPARC-positive group and the SPARC-negative group. In the survival analysis, there was a significant difference between the SPARC-positive and SPARC-negative groups in the 5-year overall survival (OS) rates after surgery, which were 8.1% and 19.8%, respectively (p=0.0316). A univariate analysis showed that the SPARC expression, size of tumor, lymph node metastasis, and residual tumor were possible prognostic factors. A multivariate analysis showed that the SPARC expression (hazard ratio [HR]: 1.44, 95% confidence interval [CI]: 1.017-2.051), lymph node metastasis (HR: 2.019, 95% CI: 1.318-3.091), and residual tumor (HR: 1.648, 95% CI: 1.132-2.401) were independent prognostic factors.

Conclusions: The stromal SPARC expression in resectable pancreatic cancer patients might be useful as a prognostic marker.

Pancreatic ductal adenocarcinoma (PDAC) is a lethal disease found worldwide. The GLOBOCAN 2012 estimated that pancreatic cancer is the seventh leading cause of cancer death1. Other reports have also mentioned that pancreatic cancer will become the second leading cause of cancer-related death in the United States by 20302. The only chance for a cure is to receive a diagnosis at the resectable stage and to undergo multidisciplinary therapy: complete surgical resection and perioperative adjuvant treatment3-5.

However, despite technical advances in surgical resection, perioperative management, and multi-drug combination chemotherapy, the survival improvement is insufficient compared with most other cancers. For example, the Japan Adjuvant Study Group of Pancreatic Cancer showed that S-1 (oral fluorouracil) adjuvant chemotherapy improved the disease-free survival (DFS) and overall survival (OS) for completely resected pancreatic cancer patients with a 5-year survival rate of 44.1%5. However, recurrence was observed in 72% of patients with curatively resected pancreatic cancer. A more effective therapy is therefore urgently needed.

Secreted protein acidic and rich in cysteine (SPARC) is an extracellular protein that plays roles in cancer cell migration, proliferation, angiogenesis, matrix cell adhesion, and tissue remodeling6. Pancreatic cancer is a tumor consisting of abundant stroma and an extracellular matrix and tumor-stroma cells are related to tumor progression, promoting carcinogenesis and treatment resistance7-9. In recent studies, SPARC has been found to localize to the tumor stroma and to be overexpressed in various cancers, such as breast, lung, and melanoma. Although many studies have evaluated the significance of SPARC expression, its role in carcinogenesis remains unclear10-14. Stromal SPARC expression is reported to be associated with a poor prognosis. However, the most important issue at present is that a clinical standard of SPARC expression has not been established.

All of the operations were performed by four surgeons from the pancreatic unit. All pancreatic surgeries were performed in accordance with standardized procedures that have been described elsewhere. In brief, in cases of pancreaticoduodenectomy (PD), we performed subtotal stomach-preserving pancreaticoduodenectomy as the standard procedure. The lymph node groups that were resected en bloc included the anterior pancreatic duodenal lymph nodes, the posterior pancreatic duodenal lymph nodes, nodes in the lower hepatoduodenal ligament, and nodes along the right lateral aspect of the superior mesenteric artery and vein. In cases of distal pancreatectomy (DP), lymph node dissection was performed in the region of the celiac trunk and the superior mesenteric artery and vein, as well as behind the pancreas along the left side of the renal vein and the left adrenal gland.

S-1 treatment was started within 10 weeks after surgery. The patients received 80 to 120 mg/day for 4 weeks followed by 2 weeks of rest, and treatment was continued for 6 months. The doses were modified in accordance with the JASPAC-01 trial5; when adverse reactions appeared, the dose was reduced from 120 by 20 mg/day. Gemcitabine treatment was started within eight weeks of surgery and continued for six months. The patients received a weekly dose of 1,000 mg/m2 for 3 weeks, followed by 1 week of rest. Adjuvant chemotherapy was discontinued when the patient showed disease recurrence or adverse events that were uncontrollable even by dose modification or the temporary withdrawal.

The immunohistochemical analysis of the SPARC expression

Slides from all resection specimens were retrieved from the archive and reviewed by expert gastrointestinal pathologists. The H&E slide with the highest tumor cell density and the deepest tumor infiltration was selected. Hematoxylin and eosin-stained slides of the representative PDAC region were reviewed, and the corresponding formalin-fixed, paraffin-embedded tissue blocks were selected for use in a tissue microarray. The SPARC expression was evaluated using purified rabbit polyclonal antibody, which was purchased from EMD Millipore (Temecula, CA, USA). The intensity of stromal SPARC staining was scored as follows: grade 0, not stained; grade 1, faintly stained; grade 2, weakly stained; and grade 3, stained as strongly in stroma. (Figure 1). The immunohistochemical evaluation of the SPARC expression was independently confirmed by two observers (M.M. and Y.M.), and a consensus was reached by joint review.

The significance of the correlations between the SPARC expression and clinicopathological parameters was determined using Fisher's exact test or a χ2 test. The OS was defined as the period between surgery and death. The data of the patients who had experienced no events were censored at the date of the final observation. The OS curves were calculated using the Kaplan-Meier method and compared using the log-rank test. The univariate and multivariate survival analyses were performed using Cox's proportional hazards model. P values of <0.05 were considered statistically significant. The survival data were obtained from hospital records or from the city registry system. The SPSS software program (v11.0 J Win, SPSS, Chicago, IL, USA) was used for all of the statistical analyses. This study was approved by the IRB Committee of the Kanagawa Cancer Center.

A total of 201 patients underwent surgical resection between 2005 and 2014, and 179 patients were eligible for this study. The median age was 68 years (range, 40-86 years); 97 patients were male, and 82 were female. One hundred and thirteen patients underwent pancreaticoduodenectomy, 54 distal pancreatectomy, and 12 total pancreatectomy. The median follow-up period was 62.1 months (range, 3.4-122.4 months). As adjuvant chemotherapy after resection, 79 patients received gemcitabine therapy, 68 patients S-1 therapy, 4 patients gemcitabine and S-1 combination therapy, and 28 patients no adjuvant chemotherapy.

The representative results of immunohistochemical staining for SPARC in PDAC tissue stroma are shown in Figure 1. Immunoreactivity was mostly observed in the stroma of pancreatic cancer tissue. Of the 179 tumor samples, 70 (39.1%) showed positive staining. Seventy patients were thus classified to the SPARC-positive group and 109 to the SPARC-negative group. Table 1 compares the patient background characteristics between these two groups. There were no significant differences between the two groups in gender, age, tumor location, size of tumor, implemented adjuvant chemotherapy, and pathological status.

A comparison of the patient background between the SPARC-positive and SPARC-negative groups.

Comparison of overall survival between the SPARC-positive and SPARC-negative groups. 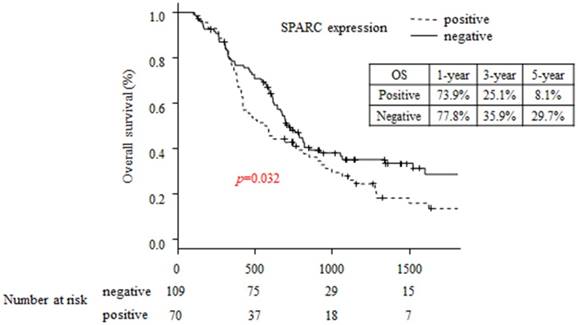 Comparison of recurrence-free survival between the SPARC-positive and SPARC-negative groups. 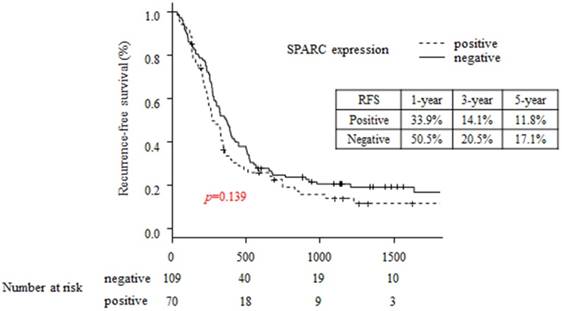 Univariate and multivariate analyses of risk factors for the overall survival

The aim of the present study was to evaluate the clinical impact of the stromal SPARC expression as a prognostic factor in pancreatic adenocarcinoma patients who underwent curative resection. The major findings were that stromal SPARC expression was observed in almost 40% of pancreatic adenocarcinoma patients who underwent curative resection, and this expression was an independent prognostic factor. Our results suggest that current adjuvant chemotherapy is insufficient, especially in patients with high SPARC expression. These patients should be a target group for clinical trials of novel treatments.

In contrast, however, Hidalgo et al. reported that SPARC levels were not associated with treatment efficacy in patients with unresectable and metastatic pancreatic cancer in the phase III MPACT trial (OS hazard ratio: 1.019; p=0.903)17. In that study, 256 advanced PDAC patients treated with gemcitabine with or without nab-paclitaxel chemotherapy were evaluated. The SPARC status in the stroma and plasma was examined by immunohistochemistry and enzyme-linked immune-sorbent Assay (ELISA). As a result, 28% of patients were positive for stromal SPARC, and the positive expression of SPARC in the stroma was not associated with the prognosis (hazard ratio: 1.019 [95% confidence interval: 0.750-1.386], p value=0.903).

In the current study, the SPARC expression was an independent prognostic factor of resected PDAC patients but not in advanced PDAC. The mechanism by which stromal SPARC expression portends a worse prognosis is unclear. The most likely hypothesis is that SPARC expression plays an important role in the proliferation of tumor stroma fibroblasts, which are related to chemo-resistance and tumor growth.

Of note, however: there was no significant difference in the RFS of the patients according to the SPARC status. Sinn et al. reported that the SPARC status is related to the recurrence12. In their report, 160 patients who participated in the CONKO-001 study were evaluated via tissue microarrays, and patients strongly expressing SPARC had a worse DFS than those weakly expressing it (p value=0.005). Furthermore, there was a significant difference in the DFS according to the SPARC status in patients receiving gemcitabine adjuvant therapy. We therefore believe that the main reason for our negative result is the difference in treatment after surgery.

There are some limitations associated with this study. First, this study was a retrospective analysis that was performed at a single cancer center. Second, the post-operative treatment regimen differed among patients, with some patients receiving gemcitabine adjuvant chemotherapy and others nothing. We cannot deny the possibility that treatment variation affected the survival. Second, the present study was only analyzed the Eastern patients cohort. Therefore, similar evaluation was needed in Western cohort series.

In summary, the SPARC expression was found to be useful as a prognostic marker in pancreatic adenocarcinoma patients who underwent curative resection. The present results should be confirmed in another cohort or in a prospective study.

This work was supported by the Kanagawa Prefectural Hospitals Cancer Fund.