Background: Mounting evidence has indicated that long noncoding RNAs (lncRNAs) are promising candidates for tumor diagnosis and prognosis. Nonetheless, the significance of lncRNAs in colorectal cancer (CRC) diagnosis remains to be clarified. Here, we performed a comprehensive meta-analysis to evaluate the utility of lncRNAs as diagnostic indicators for CRC.

Materials and Methods: Pertinent studies were searched using PubMed, PMC, Web of Science, Cochrane, and EMBASE database up to September 2018. Study quality was assessed with the Quality Assessment for Studies of Diagnostic Accuracy-2. Subgroup analyses by sample size and publication year were conducted. Threshold effect and meta-regression were performed to find the origin of heterogeneity. Statistical analyses were conducted using Stata and Meta-Disc.

Colorectal cancer (CRC) is the third most common malignancy with the occurrence of 1.3 million new cases and 0.7 million cancer-related deaths per year around the world [1]. In China, the mortality of CRC ranks fourth among various types of cancers [2]. Although substantial advances in multidisciplinary treatment for CRC have contributed to great improvements in survival outcome, early diagnosis of CRC is still a major issue to be solved [3]. Colonoscopy examination can provide a high diagnostic accuracy, but its invasiveness makes this procedure intolerant to many patients, limiting its use for large-scale screening. Fecal occult blood testing is a widely used test, whereas it has relatively unsatisfactory accuracy. The measurement of blood biomarkers such as carcinoembryonic antigen (CEA) has a limited utility due to low sensitivity for CRC, particularly in early stage of cancer [4]. An ideal approach for CRC screening is supposed to possess a very high degree of sensitivity and specificity for early cancer detection. Over the past decade, substantial endeavors were made by researchers to seek for more effective and reliable screening tests based on a systems biology method, using easily accessible human specimens, such as serum, urine, and feces. Therefore, it is essential to determine novel biomarkers for early diagnosis and targeted therapy for CRC patients.

Long non-coding RNAs (lncRNAs) participate in gene expression regulation at different levels, exerting a key role in various biological processes [5, 6]. Dysregulated lncRNA expression has been demonstrated in malignant transformation and tumor progression [7, 8]. A number of lncRNAs have been associated with clinical diagnosis and survival outcomes in cancer patients, and can be used as a predictor for tumor prognosis [9-13]. Recently, lncRNAs have been considered as novel markers for cancer diagnosis, but with varying diagnostic accuracy [14].

LncRNAs have been suggested as a promising marker for CRC diagnosis. Ye et al. examined the diagnostic efficiency of lnc-GNAT1-1 in CRC, and revealed that the area under the curve (AUC) of the receiver operator characteristic (ROC) curve is 0.72, indicating that serum lnc-GNAT1-1 level exhibits a moderate to strong diagnostic efficiency for CRC patients [15]. Based on a study performed by Svoboda et al., HOTAIR is dramatically up-regulated in plasma of CRC patients. ROC analysis presented an AUC of 0.87, with 67% sensitivity and 92.5% specificity of CRC detection, respectively [16]. With increasing evidence suggesting the diagnostic use of various lncRNAs in CRC, the utility of lncRNAs in CRC diagnosis, however, has not been comprehensively investigated yet.

The current meta-analysis conformed with the protocol of the preferred reporting items for systematic reviews and meta-analyses (PRISMA) guidelines [17]. PubMed, PMC, Web of Science, Cochrane Library, and EMBASE were searched up to September 2018 for pertinent articles using the keywords as follows: (lncRNA or long noncoding RNA) and (CRC or colorectal cancer) and (sensitivity or specificity or diagnosis or receiver operating characteristic curve). The titles and abstracts were screened, and the relevant full-text manuscripts were acquired for perusal.

The inclusion criteria were as follows: (a) studies assessing the diagnostic value of lncRNAs in CRC; (b) studies should contain true negative, true positive, false negative, and false positive values to reconstruct the 2 × 2 contingency tables; and (c) CRC diagnosis was verified by two independent pathologists. The exclusion criteria were: (a) letters, case reports, and reviews; and (b) duplicate studies. The literature review process was accomplished by C.J. and Z.X.L. Group discussion was carried out to settle any disagreement and achieve a consensus.

C.J. and C.Z.Q. independently evaluated the quality of the enrolled studies according to the Quality Assessment of Diagnostic Accuracy Studies-2 (QUADAS-2) [18]. Study quality was examined based on four dimensions: selection of subjects, index test, reference standard, and flow and timing, with each item scored as yes, no, or unclear.

The following data were extracted from the included studies: the first author, lncRNA expression pattern, year of publication, sample source, diagnostic indexes (AUC, sensitivity, and specificity), and sample size. True positive, false positive, false negative, and true negative values were directly acquired from the manuscript or calculated from the reported data in the text.

Meta-DiSc 1.4 (http://www.hrc.es/investigacion/metadisc_en.htm; Universidad Complutense, Madrid, Spain) and STATA 12.0 (Stata Corporation, College Station, TX, USA) were used for statistical analysis. We calculated sensitivity, specificity, positive likelihood ratio (LR), and negative LR of each enrolled study. An overall assessment of the diagnostic value of the lncRNA reported was acquired using diagnostic odds ratio (DOR) as well as AUC of the summary ROC (sROC) curve. The threshold effect was examined by Spearman's correlation analysis. The heterogeneity was evaluated with χ2 test and I2 statistics. Heterogeneity was concluded at P < 0.10 or I2 > 50%. Further subgroup analysis was carried out based on the size and source of sample. Meta-regression was also employed to elucidate the potential origins of heterogeneity. Moreover, we used Fagan's nomogram to evaluate the post-test probability. Deeks' funnel plot was employed to examine publication bias. A significant result was determined as P < 0.05.

A total of 7,706 potentially relevant records were identified using the PubMed, PMC, Web of Science, and the Cochrane Library database according to the predetermined keywords. After excluding 689 duplicates, we screened the titles and abstracts of the remaining 7,017 studies. Subsequently, 373 articles were included for full-text screening and data extraction after exclusion of 6,644 unrelated studies, reviews, or letters. We further removed 354 articles due to inadequate data to construct 2 × 2 tables, and the remaining 19 studies with a total of 3,114 subjects were enrolled in the current meta-analysis [15, 16, 19-35]. A flowchart illustrating the process of study selection is shown in Figure 1.

Among the included studies, the diagnostic value of 18 different lncRNAs and a 4-lncRNA panel was assessed. Most of the examined lncRNAs were increased in CRC. The sample source of thirteen studies was blood specimen, and eight studies used tissue samples to evaluate the diagnostic significance of lncRNAs in CRC. The sample size ranged between 38 and 331, with 200 as the median value. The study characteristics are listed in Table 1.

We assessed the study quality using QUADAS-2, and the results are indicated in Figure 2 and 3. The study quality of the enrolled manuscripts were mostly moderate and high. 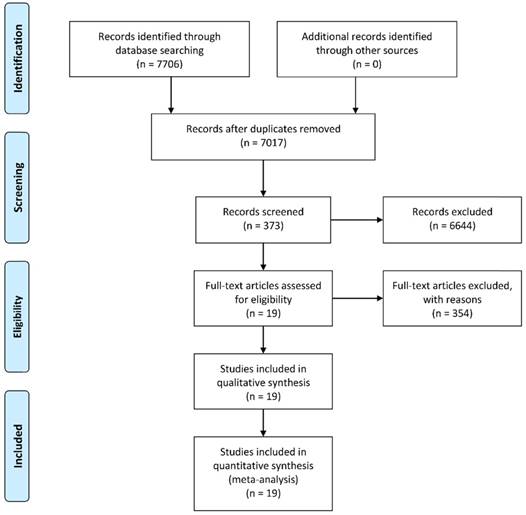 Characteristics of the studies included in the meta-analysis. 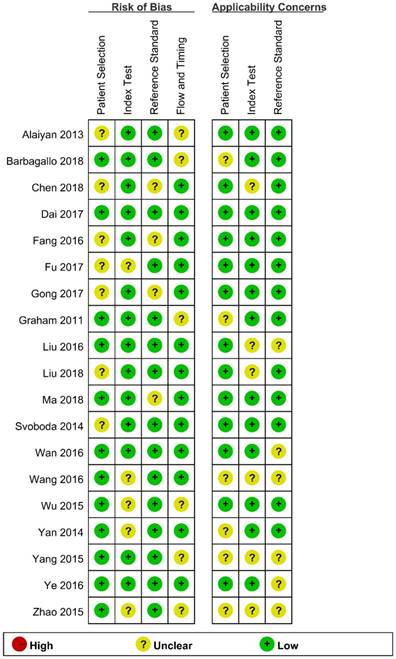 The subsequent meta-regression analysis showed no statistically significant correlation between sample size (P = 0.9582), source of specimen (P = 0.6203) and DOR in this analysis.

We adopted Deeks' funnel plot to evaluate the publication bias of the current meta-analysis (Figure 7). A P value of 0.828 showed the absence of statistically significant publication bias.

Forest plot of sensitivity (A) and specificity (B) of lncRNAs in colorectal cancer. 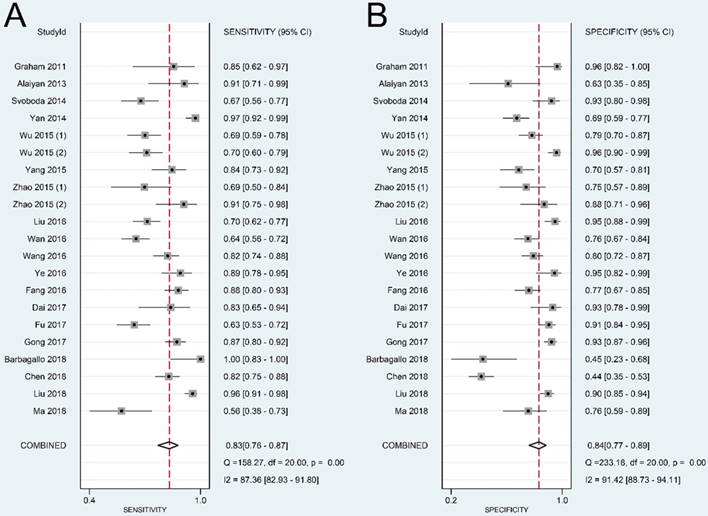 Assessment of diagnostic accuracy and heterogeneity in subgroup analysis. 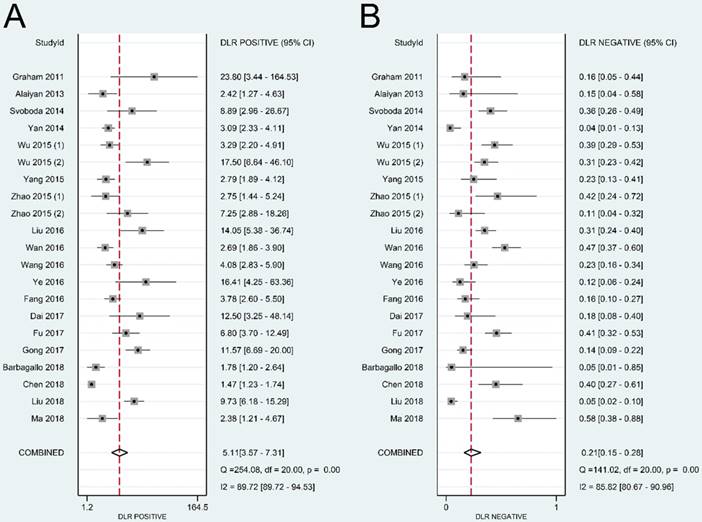 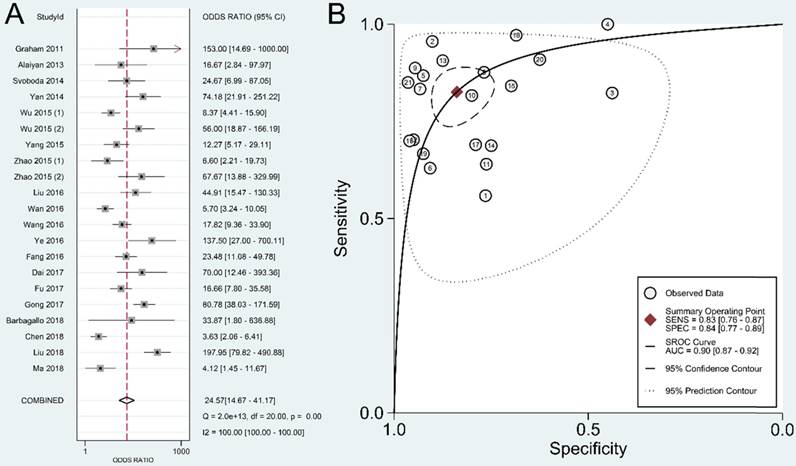 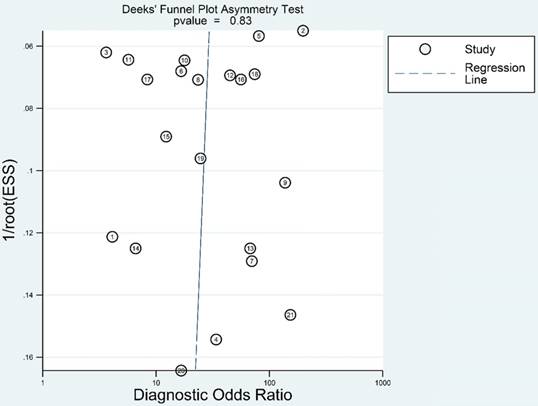 Fagan's nomogram evaluating the overall value of lncRNAs for diagnosis of colorectal cancer. 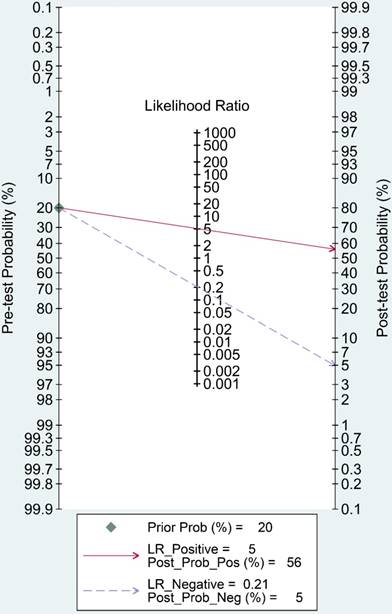 Mounting evidence has implicated that lncRNAs play an indispensable role in the carcinogenesis, proliferation, and metastasis of various tumors [37-40]. LncRNAs have been found to be involved in tumorigenesis and associated with clinical outcomes of CRC [41]. For example, Ma et al. revealed that lncRNA SNHG17 is highly over-expressed in CRC tissues and associated with dismal prognosis, thereby potentially representing an unfavorable prognostic factor for CRC patients [42]. LncRNA CCAT2 is upregulated in microsatellite-stable CRC, and promotes cancer proliferation and metastasis. Increased lncRNA CCAT2 expression could be a potential diagnostic biomarker for CRC and an independent predictor of prognosis in patients with CRC [43, 44]. Besides, it has been reported that lncRNA is an independent predictive indicator for colon cancer recurrence [45]. Given their specific expression patterns in CRC, lncRNAs are potential candidates for detecting precancerous lesions and diagnosing tumors. Therefore, lncRNAs seem to possess great advantages as tumor diagnostic biomarkers.

The present study is the first meta-analysis that evaluated the significance of lncRNAs in CRC diagnosis. According to our data, the pooled sensitivity and specificity were 0.83 (95% CI: 0.76-0.87) and 0.84 (95% CI: 0.77-0.89), respectively. A high DOR value shows an excellent discriminatory performance [46]. A summary DOR of 24.57 indicated the diagnostic value of lncRNAs for CRC patients. Reportedly, an AUC with a value greater than 0.75 is acceptable for diagnostic test [47]. Our data revealed that lncRNAs with an AUC of 0.90 (95% CI: 0.87-0.92) have good diagnostic accuracy in CRC.

Currently, there are still no diagnostic signatures for CRC with satisfactory specificity and sensitivity. CEA is a classic colon cancer screening biomarker. As reported, the pooled sensitivity of CEA for CRC is 0.46, and the specificity is 0.89[48]. The specificity of CEA is high, but the sensitivity is unsatisfactory. LncRNAs, with an overall sensitivity of 0.83, could be served as a potential candidate for diagnosing CRC patients. AUC assesses the overall performance of diagnostic markers, and has been acknowledged as the most important parameter. According to our results, the AUC of lncRNA in CRC diagnosis was 0.90, which was much higher than the reported AUC of CEA in CRC (0.79) [49]. The comparation between CEA and lncRNAs showed that lncRNAs have an edge over CEA in CRC diagnosis.

According to the abovementioned results, it seems that we may have proposed an effective CRC screening approach using lncRNAs that could be used for clinical diagnosis, but we usually do not detect multiple lncRNAs at the same time in practical application. HIF1A-AS1, a lncRNA with the highest AUC (0.96) in CRC diagnosis, has the most potential diagnostic value and may be the most promising subject for population screening. In addition, we could combine two or more lncRNAs, thereby greatly increasing their application potential.

Significant heterogeneity was detected in the meta-analysis. A Spearman correlation coefficient of 0.187 (P = 0.417) showed that the threshold effect was not the main cause of heterogeneity. Subgroup analysis and meta-regression showed that size and source of the included individuals did not cause the heterogeneity. Due to limited data, we did not include other important potential cofounding variates, such as gender, age, study design, and socioeconomic conditions.

Despite our efforts to conduct a comprehensive meta-analysis, several limitations should be addressed. First of all, it is crucial for diagnostic biomarkers that they could distinguish CRC patients from not only healthy individuals but also patients with other digestive system diseases, especially with similar symptoms. However, the control groups of most included studies were healthy people, which might lead to an overestimate of the diagnostic value. Second, a considerate amount of across-study heterogeneity was detected. Data from subgroup analyses and meta-regression could not fully explain the detected heterogeneity. Due to limited clinical and demographical data, we could not further elucidate potential sources of heterogeneity. Third, the number of lncRNAs that can be effectively used is still to be determined. Fourth, a large proportion of the included subjects were from Asia. It remains unclear whether these findings could be applied to other areas. Thus, more studies are warranted to further clarify the diagnostic value of lncRNAs for CRC patients.

To conclude, the present meta-analysis suggested that lncRNAs could distinguish CRC patients from the control group. The overall sensitivity and specificity of lncRNAs in CRC diagnosis were 0.83 and 0.84, respectively. The overall AUC was 0.90, with a pooled DOR of 24.57. LncRNAs could be used as potential candidates for CRC diagnosis.

This work did not require any written patient consent. The ethics committee of The First Affiliated Hospital of Wannan Medical College approved this work.