Conclusion: AGR might be a promising marker to better predicting prognosis of LSCC patients. Future studies are warranted to validate our finding.

In 2017, laryngeal squamous cell carcinoma (LSCC) accounts for 13150 newly diagnosed and 3710 cancer-related deaths annually in the United States [1]. In 2015, the number reported in China was 26400 and 14500 respectively [2]. Tumor-Node-Metastasis (TNM) staging system is the most commonly used methodology in evaluating LSCC prognosis. However, there were some inter-individual differences observed in the same TNM stage LSCC patients. One possible reason is the case that the current TNM staging system does not fully explain tumor heterogeneity.

Recent studies have shown that chronic inflammation increasing the risk in many malignancies, including LSCC [3-6]. Neutrophils, as an inflammatory cell, could promote tumor cell growth and invasion by generating cytokines and vascular endothelial growth factors (VEGF) [7-9]. Platelets could assist tumor cells escaped from antitumor immunity and secret VEGF and platelet-derived growth factors (PDGF) [7, 10, 11]. Lymphocytes could stop tumor progression, and reflect the function of patients' immune system [12]. Thus, some inflammation markers, including neutrophil/lymphocyte ratio (NLR), platelet/lymphocyte ratio (PLR) and lymphocyte/monocyte ratio (LMR), have been established to play a prognostic role in LSCC [13-17]. In previous study, we described a novel inflammation-based marker, albumin/globulin ratio (AGR) has a prognostic significance in LSCC [18]. However, the comparison of these markers in LSCC patients have not been investigated.

Therefore, the aim of current study was to explore and compare the prognostic value of different inflammation-based markers in an independent LSCC patient cohort, including AGR, NLR, PLR and LMR.

Three hundred and sixty-five patients with firstly diagnosed LSCC were retrospectively enrolled from January 2008 to December 2013. All surgeries were performed by the same experienced surgeon (Ji-Chun Yu) at the First/Second Affiliated Hospital of Nanchang University, China. The exclusion criteria were as following: (1) received any anti-cancer therapy previously (including radiotherapy/induction chemotherapy), n=56; (2) a history of previous/synchronous malignant tumors, n=12; (3) insufficient laboratory data before initial treatment, n=39; (4) known active inflammatory disorders (including autoimmune disease and infection) or active liver or kidney disease, n=26. In total, two hundred and thirty-two patients with LSCC were eligible for this study. Written informed consent for the collection of medical data of all patients was obtained. And the ethics committee approved the current study.

The standard treatment of this study was partial or total laryngectomy (+/- neck dissection) and postoperative radio-/chemotherapy according to the National Comprehensive Cancer Network guidelines. Postoperative radiotherapy or chemoradiotherapy was performed in patients with adverse features (including positive margins, pT4 primary, N2 or 3 nodal metastases, extracapsular node/perineural invasion).

All patients were follow-up for every 3 months in the first 2 years, and every 6 months thereafter for up to 5 years or until death. Follow-up examination including fiber laryngoscopy, neck ultrasonography, MRI. The recurrence was defined as any newly found mass on imaging examination with histologically confirmed by biopsy or surgery. The end follow-up was December 2017.

All analyses were performed using SPSS v22.0 (IBM Corporation, Armonk, New York, USA). Differences among groups were compared by the Chi-square test, Mann-Whitney U test for the different types of variables. Receiver operating characteristic (ROC) curves were plotted to determine the optimal cut-off value for AGR/NLR/PLR/LMR, and the area under the curve (AUC) were compared. The univariate and multivariate analysis were evaluated by the log-rank test and the cox proportional hazard model. A P<0.05 was defined as statically significance. 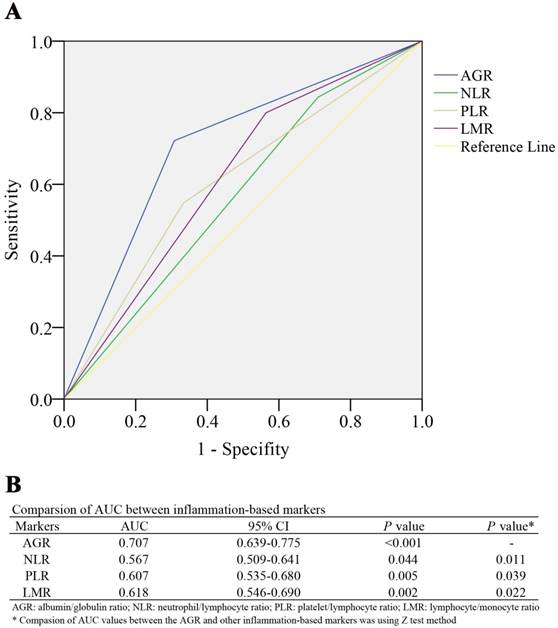 Correlation between inflammation-based markers and clinicopathological characteristics of LSCC patients

Over the last decade, various inflammation-based markers have been reported their prognostic role in many cancers [19-23], including LSCC [13-18]. In our previous report, we firstly described AGR as a prognostic marker for patients with LSCC. However, none of these studies have compared their prognostic value. In the current study, we found that all inflammation-based markers (NLR, PLR, LMR, AGR) associated with aggressive clinicopathological features (such as tumor size, lymph node metastasis, and late TNM stage) and have a significantly prognostic value for patients with LSCC, which was consistent with other reports. 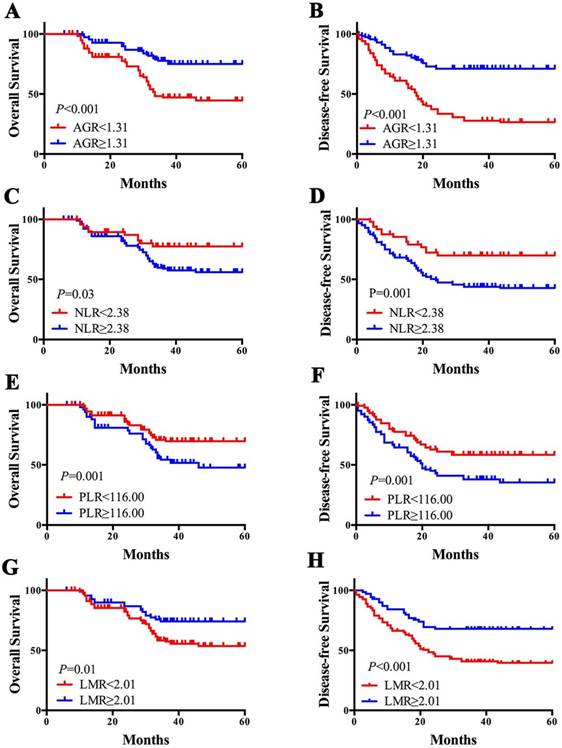 AGR not only reflects the systemic inflammatory responses, but dystrophia. Firstly, albumin has been widely used to evaluate the nutritional status and to predict the prognosis of cancer patients. Albumin has been reported various anticancer capabilities, including steadying cell growth and managing DNA replication, buffering many biochemical alterations, and its antioxidant effects which may against carcinogens [37]. Secondly, malnutrition and inflammation could prevent the synthesis of albumin. For instance, interleukin-6 promotes the generation of acute-phase reaction proteins in the liver and regulation of the synthesis of albumin by liver cells, whereas tumor necrosis factor can down-regulate the albumin gene transcription and increase the permeability of the microvasculature which leading to increased transcapillary passage of albumin [38]. Thirdly, high levels of globulins caused by aggregation of the acute-phase proteins and immunoglobulins, which reflect an inflammatory state in the tumor microenvironment [38].

In addition, we compared the prognosis value of the NLR, PLR, LMR and AGR by Z test in ROC analysis. This methodology has been validated in previous studies [39]. The results have shown that the AUC value of AGR is significantly more than the NLR, PLR, and LMR, which indicated that AGR may have a better discriminatory ability than other inflammatory markers in terms of prognosis for patients with LSCC. Since authors believe that not only systemic inflammation but nutritional status plays a role in cancer progression [40-42]. The AGR is the combination of these two predictors of adverse outcomes. Thus, it may explain AGR have a better predictive value in LSCC patients.

There are several limitations to the current study. The retrospective nature of this study may lead to an inevitable bias; therefore, an independent cohort with long-term follow-up is needed to further analyze the predictive value of these factors in LSCC patients. Additionally, the AGR were assessed at the preoperative single time point. The changes in blood over time and in response to treatment, and their relationships to the prognosis of LSCC patients may be the subject in the future study.

Our findings show that the AGR may serve as a promising prognostic factor in LSCC patients, and have a better discriminatory ability than other inflammation-based markers. Further studies are warranted to validate the predictive role of AGR in a larger, prospective, multi-centers cohort.

This work received a grant from the National Natural Science Foundation of China (No. 81760320).