The Prognostic Value of Pretreatment Plasma Fibrinogen in Urological Cancers: A Systematic Review and Meta-analysis

Methods: After a systematic search of PubMed and Embase, we included 14 studies in our meta-analysis, and estimated hazard ratios (HRs) for overall survival (OS) and cancer-specific survival (CSS) using a fixed-effect model.

Hemostatic factors play important roles in cancer development, growth, and metastasis. Plasma fibrinogen is an acute phase glycoprotein associated with hemostasis maintenance and is a key factor in inflammation [1]. Fibrinogen is reportedly synthesized and overexpressed in human tumors [2], and plays an important role in tumor cell proliferation, invasion, and angiogenesis [3, 4]. Pretreatment fibrinogen levels can predict survival outcomes in various urological cancers, including renal cell carcinoma (RCC) [5, 6], prostate cancer (PCa) [7], upper tract urothelial carcinoma (UTUC) [8], and others [9]. However, the prognostic role of fibrinogen is still unclear. Du, et al. and Lee, et al. showed that high preoperative plasma fibrinogen levels predicted worse overall survival (OS) in RCC patients [6] [10], while Erdem, et al. found no relationship between plasma fibrinogen levels and OS in localized RCC patients [11]. Perisanidis, et al. performed a meta-analysis in solid tumors to assess the prognostic value of pretreatment fibrinogen, but their study focused on RCC and included only a small number of studies [12]. Another recent meta-analysis focused on the association between fibrinogen and RCC[13], PCa and UTUC were still not taken into account. Thus, the present meta-analysis included more cancer types and additional recent studies in evaluating the prognostic value of pretreatment plasma fibrinogen on survival outcomes in urological cancers.

Before starting our research, we registered our systematic review project at PROSPERO (International Prospective Register of Systemic Reviews, http://www.crd.york.ac.uk/prospero; registration code: CRD42016043821). We conducted this meta-analysis according to the Meta-analysis of Observational Studies in Epidemiology (MOOSE) criteria (Supplementary Material).

We systematically searched PubMed and Embase to obtain all eligible clinical studies published before May 2017. There was no language restriction in our search. We used Mesh terms and keywords (fibrinogen, renal cell carcinoma, upper tract urothelial carcinoma, bladder cancer, prostate cancer, and urological cancer) to search for related articles in the databases (Supplementary Material). We also examined the references of relevant articles to retrieve potentially eligible studies. Two investigators (Haifeng Song and Guanyu Kuang) independently conducted the literature search.

Studies were included if they met all of the following criteria: 1) cohort studies on patients with urological tumors who were diagnosed pathologically; 2) survival outcomes included overall survival (OS) and/or cancer-specific survival (CSS); 3) results were expressed as hazard ratios (HRs) and corresponding 95% confidence intervals (CIs) or P-values, or HRs could be calculated based on information provided in the article. Studies were excluded based on any of the following criteria: 1) review articles, case reports, laboratory articles, or letters; 2) papers lacked key information to calculate HRs; 3) if more than one study used the same patient cohort, only the most recent or complete study was selected.

The prognostic values of plasma fibrinogen levels in urological cancers were evaluated using HRs and 95% CIs of CSS and OS, which we extracted directly from original articles. Cochran's Q-test and Higgins I2 statistics (I2) were used to evaluate the heterogeneity of included studies. Heterogeneity was indicated by I2>50% or P<0.05. The fixed-effects model (Mantel-Haenszel method) was used to calculate pooled HRs if there was no heterogeneity. Otherwise, the random effect model was used. Subgroup analysis was conducted to identify the source of heterogeneity. Egger's and Begg's tests were performed to evaluate publication bias. All statistical analyses were performed using STATA version 14.0 (Stata Corporation, College Station, TX, USA).

We identified 879 records by searching the PubMed and Embase databases. Two records were identified by examining article bibliographies. We excluded 96 duplicates. After screening titles and abstracts, 763 records were excluded and the remaining 22 were selected for full-text reading. Eight of these 22 articles were excluded: two studies were not prognosis-related, four had no OS or CSS as final outcome, and two included data that overlapped with other studies. In total, 14 studies met our eligibility criteria and were included in the final meta-analysis (Fig 1, Table 1).

The included studies had 6740 total cases from six countries (China, Japan, Korea, Germany, Austria, and Turkey). Two studies explored the prognostic value of fibrinogen in PCa (including 558 patients), eight in RCC (including 5132 patients), and four in UTUC (including 1050 patients). There were no studies of bladder cancer. As for survival outcomes, 11 studies evaluated the prognostic value of fibrinogen in predicting OS, and 12 evaluated CSS. All included studies had NOS scores >5 and were considered good quality. 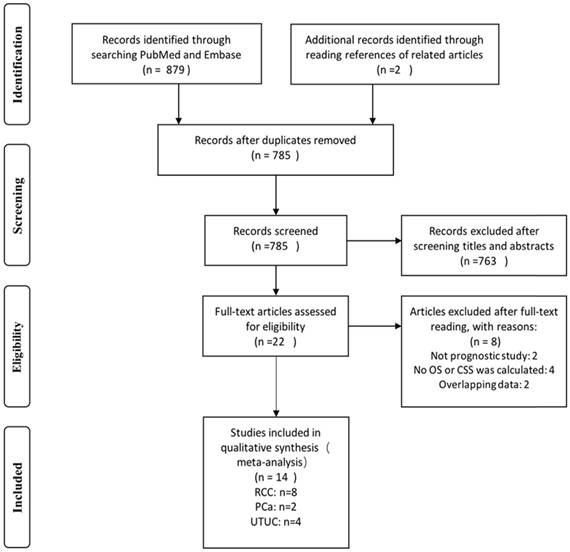 Characteristics of all 14 studies included in the meta-analysis

HR values for OS according to subgroup analysis

HR values for CSS according to subgroup analyses. 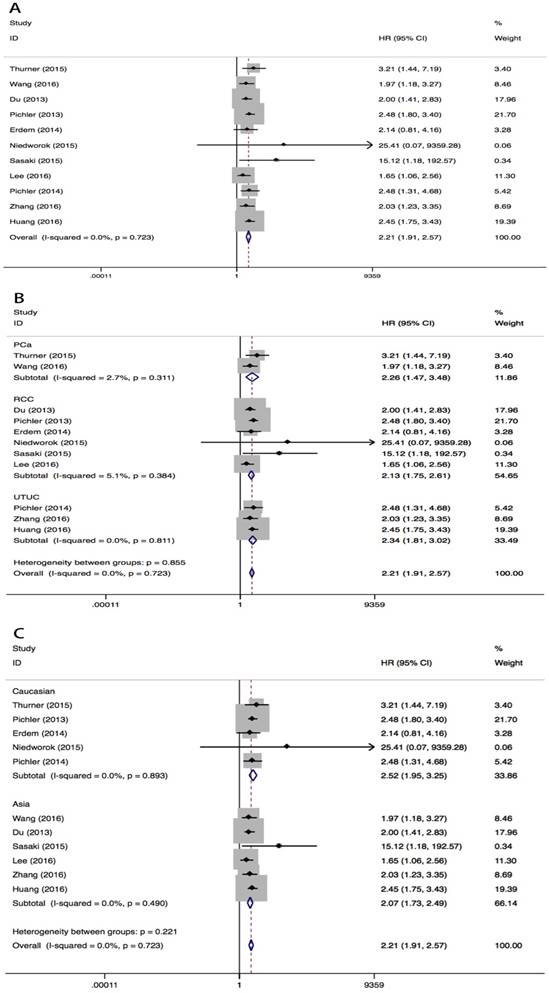 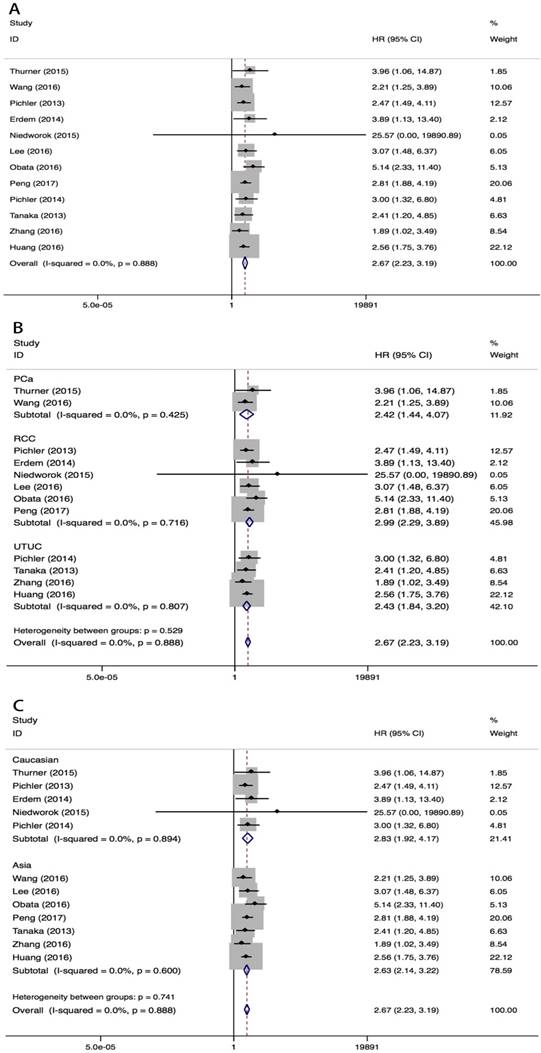 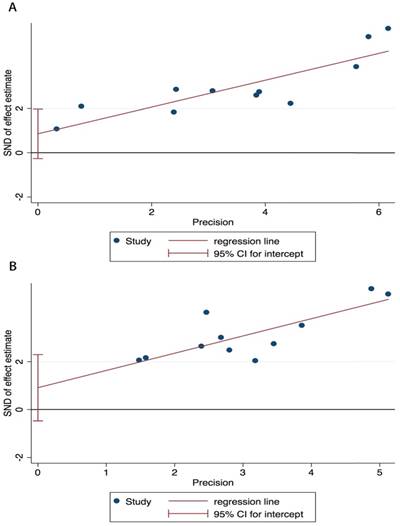 Negative associations between fibrinogen and tumor prognosis have been reported in multiple cancers, including lung [16], ovarian [17], cervical [18], hepatocellular [19], pancreatic [20], and colorectal cancer [21, 22]. However, the underlying biological mechanisms describing this relationship have not been fully elucidated. Fibrinogen appears to promote tumor proliferation, progression, and metastasis, and can be endogenously synthesized and secreted by cancer cells [2, 23]. Fibrinogen can stimulate cancer cell proliferation and angiogenesis by binding to transforming growth factor-β (TGF-β), vascular growth factor (VEGF), fibroblast growth factor-2 (FGF-2), and platelet-derived growth factor (PDGF) [2, 24-26]. Fibrinogen is also a critical determinant of tumor growth with plasminogen in the tumor microenvironment [27] and can increase the metastatic potential of malignant tumors. Joseph, et al. suggested that fibrinogen deficiency reduced the incidence of spontaneous metastasis in aggressive tumors via both hematogenous and lymphatic routes [28]. Another study indicated that formation of platelet-fibrin-tumor cell aggregates is related to tumor cell endothelial adhesion and metastatic potential, and that fibrinogen may facilitate metastasis by enhancing the sustained adherence and survival of circulating tumor cell emboli in the vasculature of target organs [29]. In addition, fibrinogen may protect tumor cells from natural killer cell cytotoxicity because of their strong adhesion to tumor cells, which facilitated the immuno-escape and accelerated the metastasis of tumor cells [30].

Despite advances in anti-cancer therapies, some patients still experience poor clinical outcomes due to low objective response rates, tumor local recurrence, and distal metastasis. Novel biomarkers are needed to identify these patients. Studies showed some inflammation response biomarkers, such as C-reactive protein, neutrophil-to-lymphocyte ratio (NLR), platelet-to-lymphocyte ratio (PLR), and lymphocyte-to-monocyte ratio (LMR), were prognostic indicators of solid tumor outcomes [31, 32]. Plasma fibrinogen is associated with hemostasis maintenance and is a key factor in inflammation. Based on previous studies, our analysis revealed that plasma fibrinogen is a prognostic biomarker that could help identify high-risk urological cancer patients before treatment. Early identification of these patients and appropriate therapeutic decision-making could improve survival outcomes. The use of anticoagulants could diminish the risk of tumor thrombosis and hematogenous metastasis in patients with elevated plasma fibrinogen. Recombinant desulfatohirudin, a highly specific thrombin inhibitor, suppressed tumor metastasis in an animal model [33].

To our knowledge, this is the first meta-analysis to comprehensively assess the prognostic value of plasma fibrinogen in urological cancers. We found no significant heterogeneity or publication bias in our analysis. However, our study had certain limitations. First, the study by Niedworok, et al. [36] lacked multivariate analyses, so we used HRs from univariate analyses to calculate the pooled HR. Univariate analysis may overestimate effect sizes because of confounder bias. However, our meta-analysis did not show any notable difference in the pooled estimation when we excluded this study. Second, we estimated OS and CSS, but did not assess other survival outcomes, such as disease-free survival and progression-free survival. This was primarily due to a lack of data in the included articles. Third, our analysis included a small number of studies, and some cancer types, such as bladder cancer, were not included in the final analysis. Finally, because our meta-analysis was based on observational studies, we could not draw robust conclusions about how plasma fibrinogen level changes influence survival outcomes. Only the association between pretreatment plasma fibrinogen level and poor survival outcome could be deduced.

In conclusion, our meta-analysis was based on present studies and it revealed that high pretreatment plasma fibrinogen levels can predict worse OS and CSS in urological cancer patients. While further clinical studies are needed, our results suggest that pretreatment plasma fibrinogen might be an effective prognostic biomarker for such patients and could potentially influence decision-making during treatment.

1. Hoppe B. Fibrinogen and factor XIII at the intersection of coagulation, fibrinolysis and inflammation. Thromb Haemost. 2014;112:649-58