Materials and Methods: Data from 540 patients who were newly diagnosed with PCa or BPH between November 2014 and March 2018 were retrospectively collected and analyzed. Pretreatment SA levels were compared across various groups, then, associations between SA levels and clinic parameters of patients were analyzed as well. Univariate and multivariate logistic regression analyses were further used to identify independent associations.

Results: The mean SA levels in patients with PCa were significantly higher than with BPH (p = 0.013). Furthermore, PCa patients with bone metastases showed elevated SA levels compared with PCa without bone metastases (p < 0.001). A multivariate logistic regression model showed that: SA level > 52.35 mg/dL was identified to be independently associated with the diagnosis of PCa (HR = 1.645, p = 0.036), and SA level > 59 mg/dL was identified to be independent association with the presence of bone metastases in PCa patients (HR = 6.421, p = 0.012).

Prostate cancer (PCa) is a malignant tumor that originates from the man reproductive system, which is becoming a great detriment to male health. At present, PCa is the second most common diagnosed cancer and ranks the second leading cause of deaths in the USA [1]. In 2014, it was reported that 233,000 patients were diagnosed as PCa in United States, and 29,840 deaths were attributed to it [2]. Although the incidence of PCa in Asian was lower than that in United States and Europe [3], the morbidity and mortality of PCa in China is increasing rapidly with the changing of lifestyle [4]. As shown by data, in 2011, the incidence of PCa in China was the ninth most common malignant tumors, the death rate of PCa in Urban men ranked 9th among male malignant tumors as well [3]. The traditional prostate cancer marker, prostate-specific antigen (PSA), showed prominent contributions in the screening, diagnosis, and treatment of prostate cancer. However, there were also some problems such as high costs, long waiting time, and low specificity and sensitivity. Furthermore, PCa was prone to be bone metastases, and a considerable proportion of the patients had been advanced stage once diagnosed. A recent study showed that the survival time of PCa patients with bone metastases was significantly shorter than that without bone metastases [5]. Beyond that, there were great differences in treatment methods and protocols between the two kinds of patients. At present, emission computerized tomography (ECT) is most commonly used in assessment of bone metastases in PCa patients and it is regarded as one of the most effective detection method for bone metastases of patients diagnosed as PCa [6]. However, the examination was expensive and had certain radioactivity. Therefore, ECT was suitable to further confirm the metastases of cancer patients but not appropriate for long-term monitoring of patient's progression.

SA is a generic term for a series of hydroxylated monosaccharide derivatives containing 9 carton atoms, which locates at the methylated non-reduction terminal of glycoproteins and glycolipids [7]. The synthesis of glycolipids on the cell membrance is increased and it is secreted into the blood when cells undergo malignant transformation, as in the following, the concentration of SA is elevated in cancer patients [8]. Though studies had indicated that the level of SA in PCa patients was higher than that in normal population [9], small sample, no further analysis of multiple factors and no validated cut-off value for the PCa were existed in these studies. Beyond that, there was few research on the relationship between SA levels and bone metastases of PCa patients especially involving Asian. Therefore, we investigated the differences of SA level in patients with prostate neoplasia in order to verify its values in the diagnosis of BPH, PCa, as well as bone metastases in Chinese population, and we further give the optimal cut-off value for SA level.

(1) Diagnosis of PCa or BPH at Qilu hospital of Shandong University between November 2014 and March 2018.

(3) No diagnosis of second cancers.

The exclusion criteria were as follows:

(3) Pathological diagnosis of prostatic malignant neoplasm but not adenocarcinoma.

(4) Taking procoagulant or anticoagulant drugs within the past 2 weeks.

Date collection. Clinical date including patients' age at the time of diagnosis, lactate dehydrogenase (LDH), alkaline phosphatase (AKP), fibrinogen (FIB), and prostate specific antigen (PSA), pathological characteristics (including pathological grade and stage), prostate volume(PV) and ECT were retrieved from the electronic patient records at Qilu Hospital of Shandong University. Based on the patient's Magnetic Resonance Imaging (MRI) results, the prostate volume was estimated according to the formula of “prostate volume = length × width × height × 0.52” [10]. Pathological grade was evaluated using Gleason system, and pathological stage was assessed in accordance with 2002 TNM classification [11].

SA measurement. Before receiving any clinical interventions, 5 mL of venous blood was drawn from each patient in the early morning after 12 hours fast. Blood sample were stored in test tubes that containing a clot activator and gel, then clotted naturally at room temperature. Subsequently, samples were centrifuged at 2000 rpm for 10 minutes. The serum was separated to determine the concentration of SA by using The Roche Cobas 8000 automatic analyzer. The normal concentration of SA was defined as 45.6 mg/dL - 75.4 mg/dL.

Statistical analysis. The levels of SA in each group were expressed as mean ± standard deviation (SD), then the Kolmogorov-Smirnov was adopted to assess whether it obeys normal distribution. Student's t-test was used for normal distribution data, if not, the Mann-Whitney U-test or Kruskal-Wallis H-test was employed. Linear correlations between SA levels and LDH, AKP, FIB, PSA were evaluated as well. The receiver operative characteristic (ROC) was adopted to determine the optimal threshold of SA level for different diagnosis. Univariate and multivariate regression models were constructed to further evaluate the value of SA levels in differentiating pathological outcomes, and relevant risk was expressed as hazard ratios (HR) with 95% confidence interval (CI). All tests were two-tailed and “p” less than 0.05 was regarded as statistically significant. All data were analyzed using the Statistical Package for Social Science version 22.0 (SPSS Inc, Chicago, IL, USA) and GraphPad Prim 6 software (GraphPad Software Inc, San Diego, CA, USA).

Baseline clinical characteristics of study population. All the patients included in the present study consecutively presented at the Department of Urology, Qilu Hospital of Shandong University. After eliminating unqualified patients according to the exclusion criteria, 540 patients were eligible for inclusion in the finally study. Among those people, 408 were PCa and 132 were BPH. The ages of PCa and BPH were 68.88 ± 8.19 years and 68.11 ± 8.18 years respectively (p = 0.368) (Table 1). The mean level of SA in the PCa cohort was 56.75 ± 11.47 mg/dL, which was significantly higher than that in the BPH patients (54.05 ± 9.00 mg/dL) (p = 0.013) (Table 1, Fig. 1A). 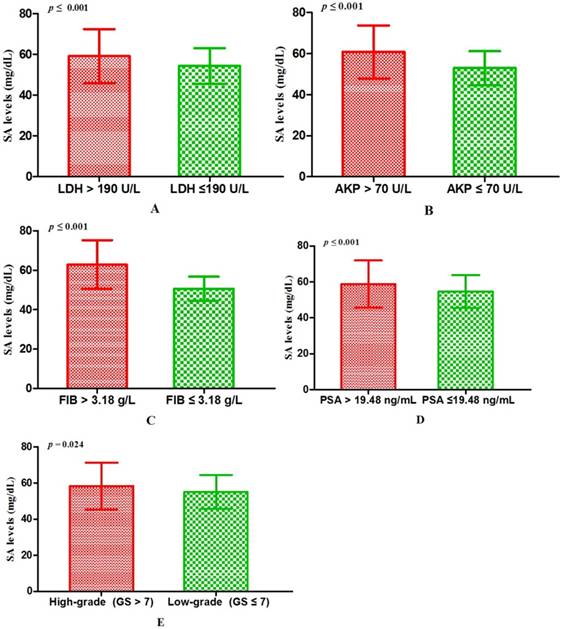 The comparisons of SA levels within different subgroups of patients diagnosed as PCa. (A) Age; (B) PV; (C) Pathological stage. 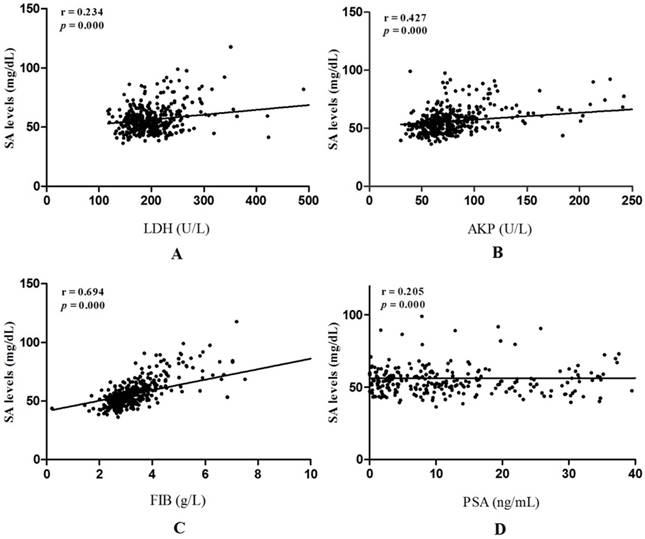 Univariate analysis of preoperative variables prognostic for PCa and its bone metastases.

Multivariate analysis of preoperative variables prognostic for PCa and its bone metastases.

SA is a terminal component of the non-reducing end of carbohydrate chains of glycoproteins and glycolipids [12]. It was mainly expressed in the cell membrance and displayed biological activity by acting as a receptor for biologically activating molecules or mediating intracellular activities, such as recognition, adhesion and antigens [13]. In the early tumor progression, the glycoprotein on the cell membrane would be changed on certain degree, and the activity of glycosyltransferases in the cells would be enhanced [14]. Then, the SA was overexpressed that acted as specific terminal glycan of glycoproteins [15]. Excessive secretion of SA sialylated tumor cells, and helped it evade the monitoring and killing of immune system. In addition, SA could cause damage to the immune system containing lymphocytes and macrophages [16, 17]. Studies had shown that elevated level of SA was significantly associated with pancreatic cancer, colorectal cancer, osteosarcoma, oral squamous cell carcinoma, and other malignancies [18-21]. However, it was worth noting that some studies had observed that SA levels was obviously higher in patients with severe infection or Type Ⅱ diabetes compared to healthy people [22, 23]. Therefore, when data was enrolled into the present study, any other malignancy, infection, inflammation, diabetes and other correlative factors were eliminated to avoid interference with the finally outcomes.

PCa was one of the most common genitourinary malignancies of men in the world, and it was one of the most common causes of death in male cancers in Western countries [24]. In China, the incidence of PCa was rapidly rising [4]. At present, the most widely used prostate cancer screening index was PSA [25, 26], however, it was difficult to distinguish PCa and BPH in some cases. The prostate biopsy was regarded as gold standard that required patients to withstand greater pain, and there was a risk of false negatives for microscopic prostate cancer. Furthermore, PCa was likely to be accompanied by bone metastases. Ramankulov A et al. showed that bone metastases were occurred in more than 70% of patients with advanced adenocarcinoma, accompanied by an occult process [27]. Whether or not bone metastases occurred was of great significance in tumor prognosis and treatment. Therefore, detection of bone metastases would be considered as an important part of PCa patients' management plan. The definitive diagnosis of bone metastases was depended on the pathology, but a few studies had shown that the detection rate of bone biopsy was lower than imageological examination in most cases [28]. The diagnostic sensitivity and specificity of ECT were highest in various imaging examinations and it was considered as one of the diagnostic standard for bone metastases in cancer patients at present [29]. However, ECT also had some disadvantages such as high costs, radiation hazards, and difficulty in widespread carried in primary hospitals. On the contrary, the test of SA had advantages of safety, low cost, convenient implementation and generalization in clinical practice.

Still, a few limitations should be noticed in present study. First, because the present study was retrospective, the potential for confounding remained. In addition, all the data were sourced from Qilu Hospital of Shandong University, so limitations may be existed in the general applicability of the results.

The present study demonstrated that preoperative SA levels in PCa patients were significantly higher than that in BPH patients, and elevated SA levels were closely associated with bone metastases. This study suggested that SA levels may be a promising biomarker and a reliable predictor for PCa and its bone metastases.

This was a retrospective study and clinical data were identified before analysis; therefore, ethical approval was not required.

27. Huggins C, Hodges CV. Studies on prostatic cancer: I. The effect of castration, of estrogen and of androgen injection on serum phosphatases in metastatic carcinoma of the prostate. 1941. J Urol. 2002;168(1):9-12